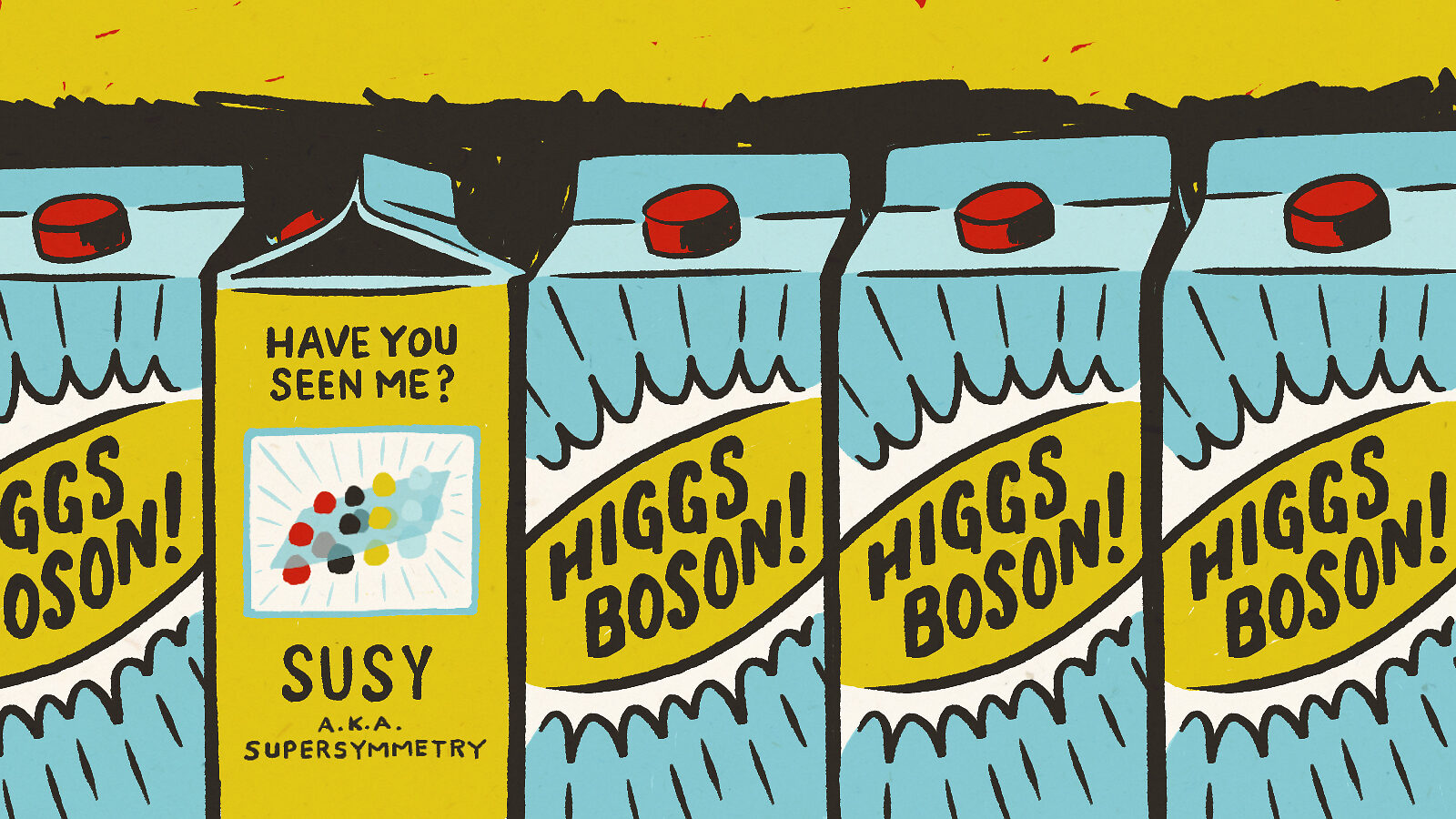 The Standard Model of particle physics is both fantastically successful and glaringly incomplete.

Its predictions have pieced together many of the known features of the universe and guided physicists to new discoveries, such as the Higgs boson. But it cannot account for the existence of dark matter—the mysterious substance that makes up 85% of the universe’s matter—or explain the Higgs boson’s mass.

How can scientists fill the gaps? For decades, a set of theories collectively known as supersymmetry seemed to provide an elegant solution.

Supersymmetry more than doubles the number of particles in the Standard Model. The particles we currently know to exist can be divided into two categories: fermions and bosons. In supersymmetric theories, each particle has an as-yet undiscovered “superpartner” with many similar properties. Fermions are paired with bosons and vice-versa.

The idea of a symmetry between fermions and bosons originated in the early 1970s to address a mathematical issue with string theory. In 1974, Julius Wess and Bruno Zumino discovered that a broad class of quantum field theories could be made supersymmetric through a generalization of the symmetries of relativity. Soon researchers devised theories in which a particle and its superpartner could have different masses.

In the early 1980s, theorists realized that the Standard Model itself could be made supersymmetric and that this extension would resolve some vexing problems with the theory. For example, the small mass of the Higgs boson is notoriously difficult to explain—its calculation requires subtracting two very large numbers that just happen to be slightly different from each other. “But if you add supersymmetry, this takes care of all these cancellations such that you can get a light Higgs mass without needing to have such luck,” says Elodie Resseguie, a postdoc at the US Department of Energy’s Lawrence Berkeley National Laboratory.

Along with an explanation for the Higgs mass, supersymmetry offered other theoretical advantages. The lightest supersymmetric particle would be a promising dark matter candidate. And the strengths of the electromagnetic force, the weak force and the strong force would become equal at extremely high energies, suggesting that the fundamental forces we observe today were unified in the early universe. “It really is a very beautiful theory,” says Michael Peskin, a theorist at SLAC National Accelerator Laboratory.

The simplest supersymmetric theories—those that best explain the Higgs boson—predict a zoo of new particles with masses comparable to those of the W and Z bosons. Those were within reach of the Large Hadron Collider, so when it turned on in 2009, many particle physicists thought the discovery of superpartners was imminent. But after the triumphant discovery of the Higgs boson came … no more new fundamental particles.

“I was shocked when supersymmetric particles were not discovered in the early days of the LHC,” Peskin says.

Not all theorists were caught by surprise. “There were many people who were loudly saying that there was something wrong with the basic picture of supersymmetry well before the LHC,” says Nima Arkani-Hamed, a theorist at the Institute for Advanced Study in Princeton, New Jersey. “You would have thought that if all these particles were lying around not much heavier than where we’ve been, they would leave some indirect effects in low-energy physical process.”

Previous experiments at the Large Electron-Positron Collider, which operated from 1989 to 2000, had already cast doubt on the simplest supersymmetric models, Arkani-Hamed says.

Jim Gates, a theorist at Brown University and president-elect of the American Physical Society, says he never expected supersymmetry to show up at the LHC. For decades, he has maintained that the most plausible supersymmetric theories predict superpartners too heavy to be discovered with current accelerators.

As data from the LHC has continued to accumulate, the models of supersymmetry originally favored by the community have been largely ruled out. For example, gluinos, the hypothesized superpartners of gluons, have been excluded up to a mass of 2 trillion electronvolts—an order of magnitude larger than many theorists had hoped. It appears increasingly unlikely that supersymmetry could include all three features—an explanation for the Higgs mass, a dark matter particle and force unification—found in the pre-LHC models.

The lack of evidence for supersymmetry at the LHC does not signify a death knell for the idea. Nevertheless, “now the community is going off in a large number of different directions,” Peskin says. “We’re all pretty confused right now.”

If supersymmetry does exist, there are two main possibilities: Either all the supersymmetric particles are too heavy to be produced at the energies accessible to current particle accelerators, as Gates suspects—or superpartners are created in collisions at the LHC, but for some reason they escape detection.

For instance, most searches for new particles at the LHC have assumed that they would decay almost immediately after being created, giving them no time to travel away from the interaction point. But several unconventional supersymmetric theories predict long-lived superpartners. These particles would travel between a few micrometers and few hundred thousand kilometers before decaying. Ongoing projects on both the ATLAS and CMS experiments seek to pick up the trail of long-lived particles. US participation in ATLAS and CMS receives support from the US Department of Energy’s Office of Science and the National Science Foundation.

Researchers on ATLAS and CMS are also looking for superpartners that would decay into low-energy Standard Model particles. “It’s a very challenging search because we can’t use the standard techniques that we use for most of the other supersymmetry searches,” says Christian Herwig, a postdoc at Fermi National Accelerator Laboratory who works on the CMS experiment.

Even without supersymmetry, low-energy particles are abundant in the detectors, so researchers must devise clever ways of separating this irrelevant background from interactions that hint at supersymmetry.

Arkani-Hamed views split supersymmetry as the most promising theory given current data. Still, “theorists are not married to things. We’re trying to discover the truth,” he says. “So we pick up ideas and explore them to see what they imply, and we let experiment decide.”

Although split supersymmetry offers a dark matter candidate and unifies the fundamental forces at high energies, it does not address the stability of the Higgs boson, leaving some theorists doubtful. “My number-one priority is to solve the Higgs problem, and I don’t see that split supersymmetry solves that problem,” Peskin says.

Faced with the dearth of experimental evidence for supersymmetry, he is now exploring alternative explanations for the properties of the Higgs boson. Just as protons are made up of quarks and gluons, Peskin suspects that the Higgs boson may have a hidden substructure.

The saga of supersymmetry “should be taken as a caution,” Gates says. “This, unfortunately, is an example where the particle physics community got its head out over its skis. We should always be extraordinarily mindful that nature is indeed subtle, and we have to take our cues from nature.”

As segments of the particle physics community have drifted away from supersymmetry, many experimentalists remain optimistic. “We’re doing things with our detector now that we never thought would have been possible when we built it,” Herwig says. “Being able to do these things really opens up entirely new possibilities and analysis strategies that we’re working to implement for the next years of data-taking.”

By the late 2020s, an upgrade to the LHC known as the High-Luminosity LHC will allow experimentalists to explore uncharted areas of the supersymmetric landscape.

Future colliders that will probe even higher energies could turn up superpartners, too. But instead of being motivated by the search for supersymmetry, “the reason for building the next colliders is to study the Higgs boson to death, full stop,” Arkani-Hamed says.

Peskin agrees that learning more about the Higgs is crucial to understanding physics beyond the Standard Model. “Almost every theory of the Higgs boson is consistent with current data,” and so none of them can be ruled out, he says. “We really don’t know anything about it.”

It could be decades before physicists know the truth about supersymmetry. If superpartners exist, Gates says that up to a century could pass before their discovery.

But “we know how to be patient as a community,” Herwig says.

For neutrinos, the path from theoretical prediction to experimental observation took 25 years. For the Higgs boson, it took a half-century. And for gravitational waves, it took a full 100 years.

Supersymmetry may not solve all the problems that researchers initially hoped it would. But Resseguie is excited to forge ahead in the quest to understand nature: “Either supersymmetry is the answer, or it is not, but the only way we’ll find out is if we keep looking.”