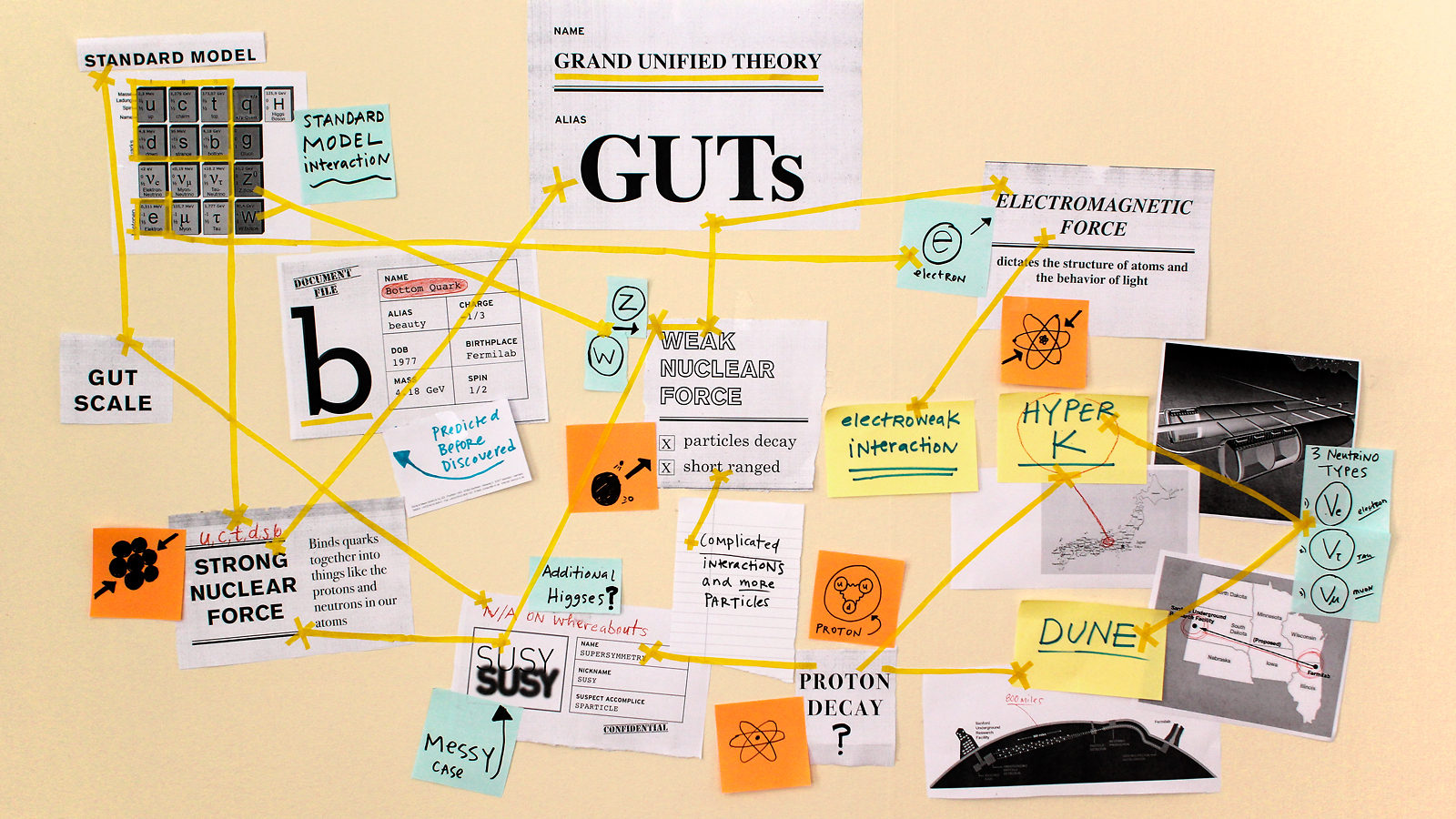 The 1970s were a heady time in particle physics. New accelerators in the United States and Europe turned up unexpected particles that theorists tried to explain, and theorists in turn predicted new particles for experiments to hunt. The result was the Standard Model of particles and interactions, a theory that is essentially a catalog of the fundamental bits of matter and the forces governing them.

While that Standard Model is a very good description of the subatomic world, some important aspects—such as particle masses—come out of experiments rather than theory.

“If you write down the Standard Model, quite frankly it's a mess,” says John Ellis, a particle physicist at King’s College London. “You've got a whole bunch of parameters, and they all look arbitrary. You can't convince me that's the final theory!”

The hunt was on to create a grand unified theory, or GUT, that would elegantly explain how the universe works by linking three of the four known forces together. Physicists first linked the electromagnetic force, which dictates the structure of atoms and the behavior of light, and the weak nuclear force, which underlies how particles decay.

But they didn’t want to stop there. Scientists began working to link this electroweak theory with the strong force, which binds quarks together into things like the protons and neutrons in our atoms. (The fourth force that we know, gravity, doesn’t have a complete working quantum theory, so it's relegated to the realm of Theories of Everything, or ToEs.)

Linking the different forces into a single theory isn’t easy, since each behaves a different way. Electromagnetism is long-ranged, the weak force is short-ranged, and the strong force is weak in high-energy environments such as the early universe and strong where energy is low. To unify these three forces, scientists have to explain how they can be aspects of a single thing and yet manifest in radically different ways in the real world.

The electroweak theory unified the electromagnetic and weak forces by proposing they were aspects of a single interaction that is present only at very high energies, as in a particle accelerator or the very early universe. Above a certain threshold known as the electroweak scale, there is no difference between the two forces, but that unity is broken when the energy drops below a certain point.

The GUTs developed in the mid-1970s to incorporate the strong force predicted new particles, just as the electroweak theory had before. In fact, the very first GUT showed a relationship between particle masses that allowed physicists to make predictions about the second-heaviest particle before it was detected experimentally.

“We calculated the mass of the bottom quark before it was discovered,” says Mary Gaillard, a particle physicist at University of California, Berkeley. Scientists at Fermilab would go on to find the particle in 1977.

GUTs also predicted that protons should decay into lighter particles. There was just one problem: Experiments didn’t see that decay. 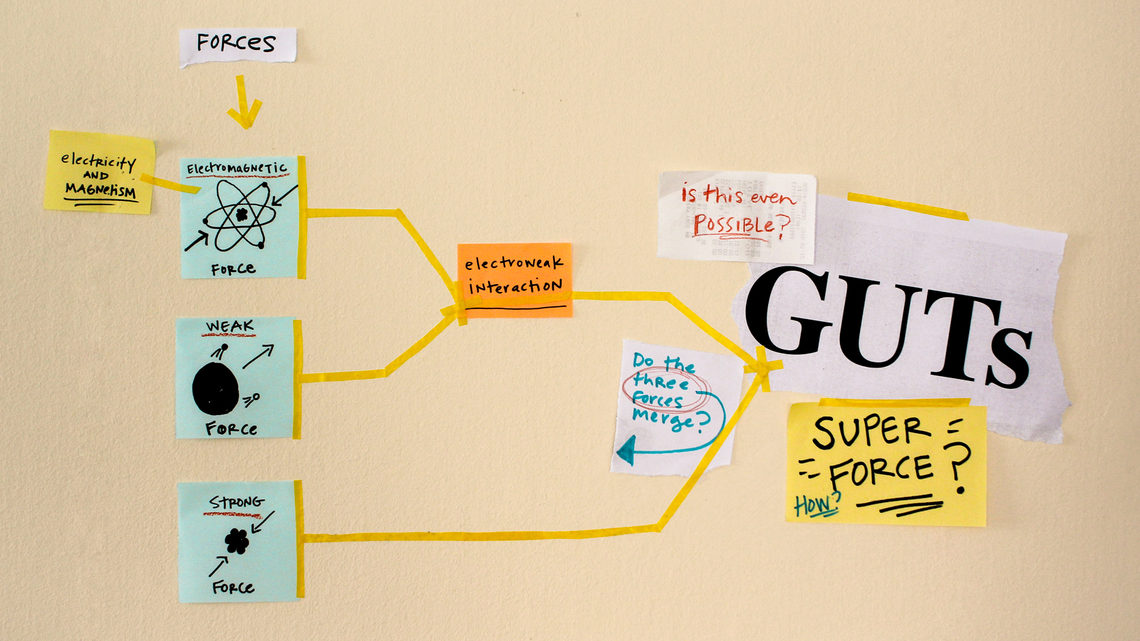 The problem with protons

GUTs predicted that all quarks could potentially change into lighter particles, including the quarks making up protons. In fact, GUTs said that protons would be unstable over a period much longer than the lifetime of the universe. To maximize the chances of seeing that rare proton decay, physicists needed to build detectors with a lot of atoms.

Most modern GUTs mix in supersymmetry (SUSY), a way of thinking about the structure of space-time that has profound implications for particle physics. SUSY uses extra interactions to adjust the strength of the three forces in the Standard Model so that they meet at a very high energy known as the GUT scale.

“Supersymmetry gives more particles that are involved via virtual quantum effects in the decay of the proton,” says JoAnne Hewett, a physicist at the Department of Energy’s SLAC National Accelerator Laboratory. That extends the predicted lifetime of the proton beyond what previous experiments were able to test. Yet SUSY-based GUTs also have some problems.

“They're kinda messy,” Gaillard says. Particularly, these theories predict more Higgs-like particles and different ways the Higgs boson from the Standard Model should behave. For that reason, Gaillard and other physicists are less enamored of GUTs than they were in the 1970s and '80s. To make matters worse, no supersymmetric particles have been found yet. But the hunt is still on.

“The basic philosophical impulse for grand unification is still there, just as important as ever,” Ellis says. “I still love SUSY, and I also am enamored of GUTs.”

“I firmly believe that an observation of proton decay would affect how every person would think about the world,” she says. “Everybody can understand that we're made out of protons and ‘Oh wow! They decay.’”

Upcoming experiments like the proposed Hyper-K in Japan and the Deep Underground Neutrino Experiment in the United States will probe proton decay to greater precision than ever. Seeing a proton decay will tell us something about the unification of the forces of nature and whether we ultimately can trust our GUTs.