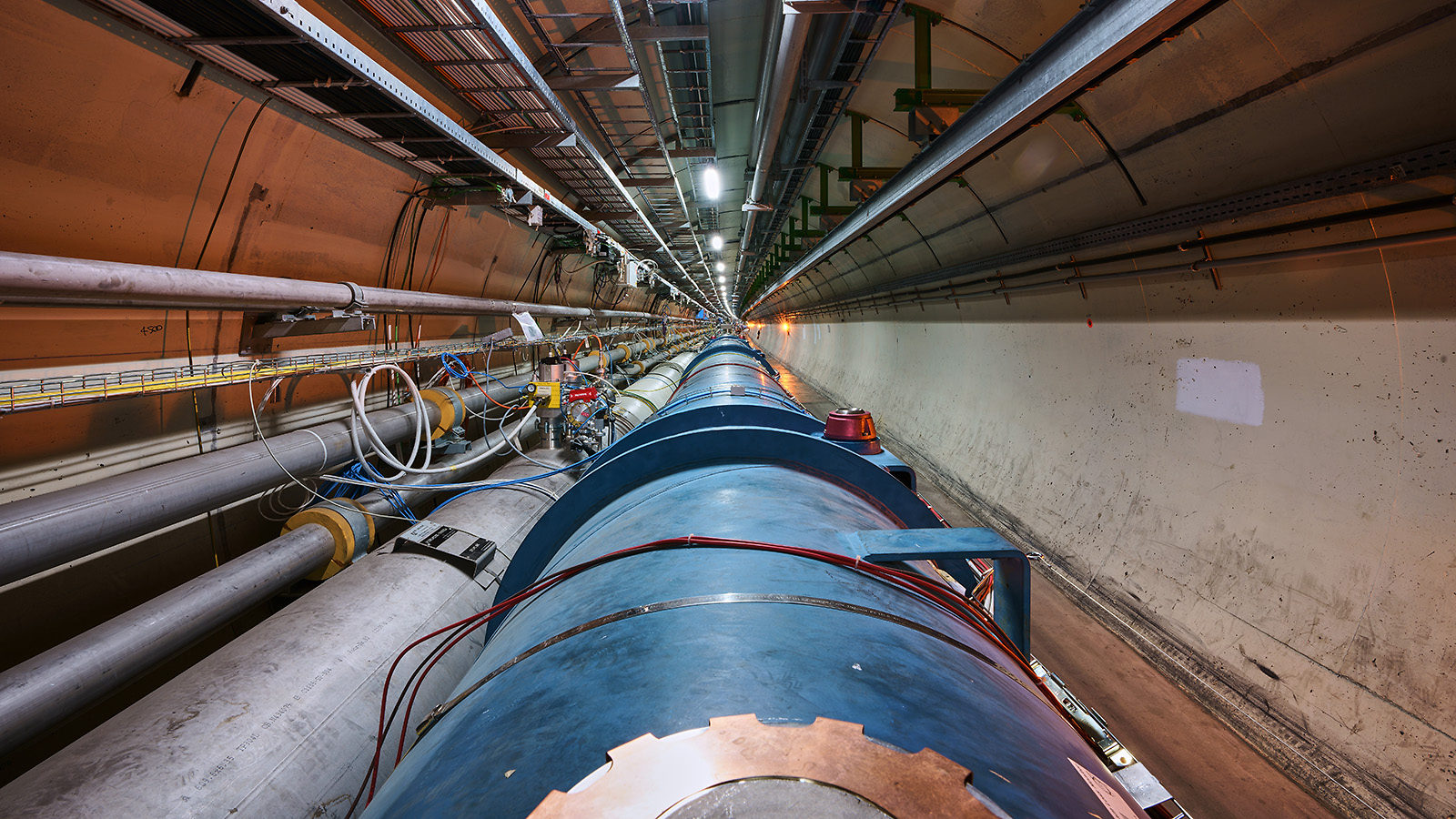 Today operators guided this year's last beam of particles out of circulation at the Large Hadron Collider, the world’s most powerful particle accelerator at the European Organization for Nuclear Research, or CERN.

Thus ends the LHC’s second run and begins its second long shutdown, a chance to conduct maintenance and consolidation activities on the machine and its detectors as well as complete the installation and commissioning of the initial upgrades to the detectors. The LHC will not surge with protons again until March 2021.

But according to scientist Viviana Cavaliere from the US Department of Energy’s Brookhaven National Laboratory, just because there’s no beam doesn’t mean the work stops.

“Most of the results that we plan to publish using Run II data aren’t done yet,” she says. “We now have two years to finish processing and analyzing the data that we’ve collected.”

Here’s a look back at what scientists have accomplished during this run so far.

Scientists have recorded an incredible amount of data since the start of Run II in March 2015—five times more than the LHC produced in Run I. The accelerator produced approximately 16 million billion proton-proton collisions (that’s a 16 followed by 15 zeros). To put that in perspective, that’s about one collision for every ant currently living on Earth.

A few factors enabled a huge jump in data quantity and quality between Run I to Run II. During the second run, experts squeezed the two proton beams from the LHC into streams of more tightly spaced, compact bunches right before they entered the detectors, generating more collisions during every bunch crossing. This decreased the time between collisions from every 50 nanoseconds to every 25 nanoseconds, giving the experiments a more continuous stream of data. During the last two years of operation, the LHC achieved a 50 percent up-time, meaning it was actively colliding protons for an average of 12 hours a day, seven days a week, for six months a year. (During the last year of Run I, the accelerator’s up-time was 36 percent.)

But it was changes to the rest of CERN’s accelerator complex that really enabled the LHC to reach its peak performance.

“Protons are fed into the LHC through a long chain of injector accelerators, and it was an improved beam production scheme in these injectors that really allowed us to reach such a huge collision rate,” says Rende Steerenberg, the head of LHC operations.

For instance, accelerator physicists figured out that if they first merged two proton bunches then split them several times, they could inject a denser beam into the LHC that would in turn increase the probability that two protons would collide. During the shutdown, scientists, engineers and technicians will continue to modernize CERN’s entire accelerator complex to prepare the machine to carry incredibly intense beams of protons for the planned High Luminosity LHC in 2026, which will increase the collision rate of the LHC by a factor of five.

“The LHC has only produced about 6 percent of the total amount of data planned for its lifetime,” Steerenberg says. “But the LHC is only as good at its injectors. We need to modernize the rest of CERN’s accelerator complex so that we can continue to push what’s possible.”

Revealing the Higgs with ATLAS and CMS

During the LHC’s first run, scientists on the ATLAS and CMS experiments discovered the Higgs boson. Now, they’re using the data collected from Run II to put it under the microscope.

“During Run I, we were just trying to understand if this new bump was the Higgs,” says Joel Butler, a senior scientist at DOE's Fermi National Accelerator Laboratory who served as spokesperson for the CMS collaboration from 2016 to 2018. “During Run II, we were able to make detailed measurements of its properties and interactions. We can now use the Higgs like any other particle, even to look for new physics.”

The most important Higgs measurements made using the Run II data showed directly that the Higgs doesn’t communicate with only heavy force-carrying bosons, like the W and Z boson, but that it also interacts with “matter” particles. LHC scientists studied how the Higgs interacts with the heaviest fundamental matter particles—the bottom quark, top quark and tau lepton.

The Standard Model is a series of formulas that link all the known fundamental particles together. Based on properties like charge, spin, mass and class, the model can predict how each particle will behave with the others. Before LHC Run II started, most of the Higgs sector was unexplored and untested. Now, scientists have penciled in many of these measurements and even started using the Higgs as a tool to look for physics that doesn’t fit into the Standard Model, like dark matter particles.

Scientists on the ATLAS and CMS experiments are also reassessing how new physics might emerge from their experimental data. “We mostly look for an excess of events  on a smoothly falling background,” Cavaliere, a member of the ATLAS collaboration, says. “But we don’t know what new physics will look like, and it could be that it’s more complex than that.”

One idea that has been growing in popularity is that new particles could be somewhat stable and last long enough to travel a short distance through the detectors before decaying. And to potentially reach new discoveries, scientists have begun implementing sophisticated computational techniques like machine learning to look for signals that traditional algorithms might miss.

Uncovering the secret lives of quarks with LHCb

Since the start of Run II, LHCb scientists have discovered a whole host of new kinds of composite particles. They did this using mostly Run I data.

“We’re going to have a flood of Run II results coming out over the next five to six months,” says Sheldon Stone, an LHCb researcher and professor at Syracuse University. “It takes a while to finish these kinds of analyses.”

This curiosity about quarks has led LHCb deep into a mystery about how quarks see leptons, which come in three flavors: electron, muon and tau. One of the tenets of the Standard Model is that quarks are insensitive to lepton flavor and should therefore treat all three equally. Only the different masses play a small and well understood role in their interactions. But results from LHCb have repeatedly shown that some quark-based particles actually have a slight and unexpected preference.

“Several measurements from LHCb have indicated that the muon interaction is suppressed compared to that with electrons,” Stone says.

Another LHCb analysis indicates that some quark-based particles favor decaying into tau leptons over muons. This echoes earlier measurements made by scientists on the BaBar experiment at SLAC and the Belle experiment in Japan, which showed the same unexpected imbalance. LHCb scientists are preparing analyses that will use the plethora of data collected during Run II to investigate.

Exploring the QGP with ALICE

The ALICE experiment is unique among the four LHC giants because it’s not a particle physics experiment; it’s a dedicated nuclear physics experiment. For about three weeks a year, the LHC collides heavy atomic nuclei. These collisions have enough energy to cook up a hot and dense subatomic soup called a quark-gluon plasma, a state of matter scientists think existed in the early universe, just after the Big Bang.

“The quark-gluon plasma was the hottest material in the universe at the time—more than 100,000 times hotter than the center of the sun,” says Mateusz Ploskon, an ALICE physicist at DOE's Lawrence Berkeley National Laboratory. “It filled the entire universe about 10 microseconds after the Big Bang and could still exist today in the heart of neutron stars. ALICE was designed to figure out its physical properties, such as temperature, density, viscosity, and how it flows, morphs and crystalizes into the known baryonic matter.”

During LHC Run II, ALICE scientists made a surprising discovery; they found that some rare proton-lead and proton-proton collisions produced a large number of particles and mimicked the signatures of lead-lead collisions, suggesting that even in small collision systems tiny droplets of quark-gluon plasma could be produced.

This “came to us as a surprise,” Ploskon says. “We are yet to fully understand the consequences of some of the new observations. However, they clearly expand our knowledge of quantum chromodynamics, the theory of the strong force.”