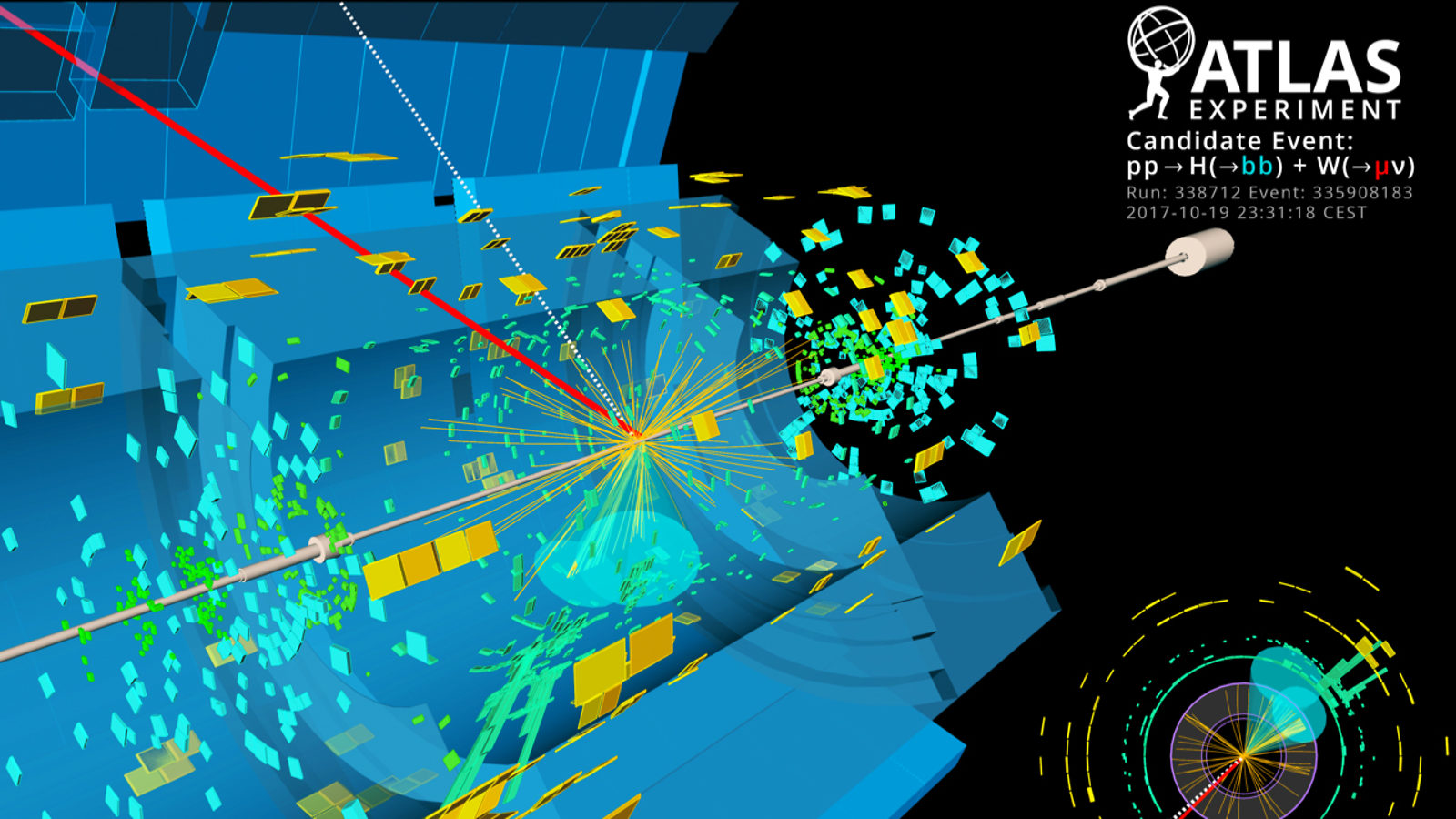 Today at CERN, the Large Hadron Collider collaborations ATLAS and CMS jointly announced the discovery of the Higgs boson transforming into bottom quarks as it decays. This is predicted to be the most common way for Higgs bosons to decay, yet was a difficult signal to isolate because background processes closely mimic the subtle signal. This new discovery is a big step forward in the quest to understand how the Higgs enables fundamental particles to acquire mass.

After several years of refining their techniques and gradually incorporating more data, both experiments finally saw evidence of the Higgs decaying to bottom quarks that exceeds the 5-sigma threshold of statistical significance typically required to claim a discovery. Both teams found their results were consistent with predictions based on the Standard Model.

“The Higgs boson is an integral component of our universe and theorized to give all fundamental particles their mass,” says Patty McBride, distinguished scientist at the US Department of Energy’s Fermi National Accelerator Laboratory and recently elected a deputy spokesperson of the CMS experiment. “But we haven’t yet confirmed exactly how this field interacts—or even if it interacts—with all the particles we know about, or if it interacts with dark matter particles, which remain to be detected.”

Higgs bosons are produced in only roughly one out of a billion LHC collisions and live only a tiny fraction of a second before their energy is converted into a cascade of other particles. Because it’s impossible to see Higgs bosons directly, scientists use these secondary particle decay products to study the Higgs’ properties. Since its discovery in 2012, scientists have been able to identify only about 30 percent of all the predicted Higgs boson decays. According to Viviana Cavaliere, a physicist at Brookhaven National Laboratory who works on the ATLAS experiment, finding the Higgs boson decaying into bottom quarks has been priority no. 1 for the last several years because of its large decay rate.

“Theory predicts that 60 percent of Higgs bosons decay into bottom quarks,” says Cavaliere, who is also using this process to search for new physics. “Finding and understanding this channel is critical because it opens up the possibility for us to examine the behavior of the Higgs, such as whether it could interact with new, undiscovered particles.”

“A fraction of Higgs bosons could be producing dark matter particles as part of their decay,” says Giacinto Piacquadio, a physicist at Stony Brook University who co-led the Higgs-to-bottom-quarks analysis group. “Because the decay of the Higgs boson to bottom quarks is so common, we can use it to put constraints on potentially invisible decays as well as use it to probe for new physics directly.” 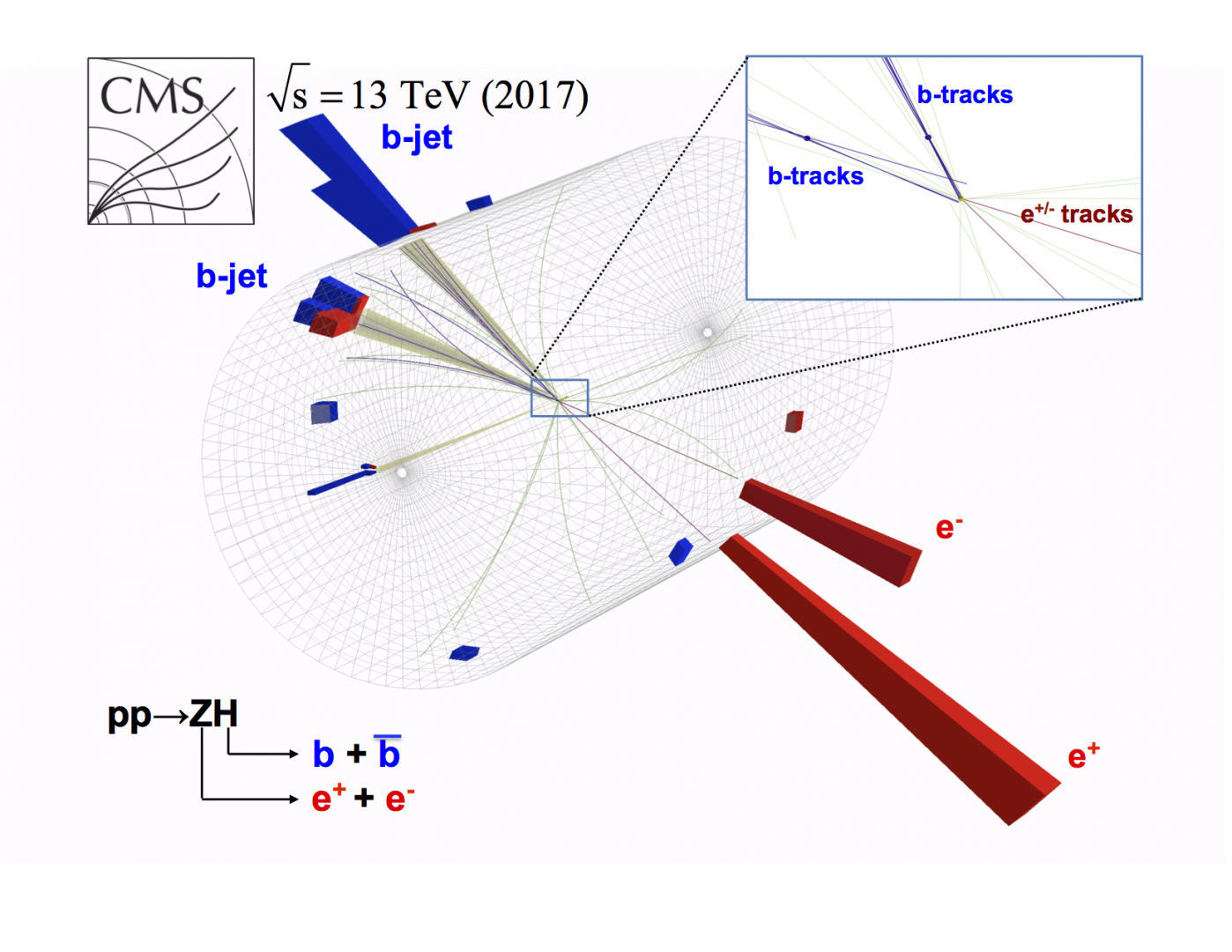 A CMS candidate event for the Higgs boson (H) decaying to two bottom quarks (b), in association with a Z boson decaying to an electron (e-) and an antielectron (e+).

Even though this decay is the most popular path, spotting it in the experimental data was no walk in the park. Every proton-proton collision at the LHC produces a splattering of subatomic byproducts, one of the most common being bottom quarks. These bottom quarks then quickly decay into other kinds of particles, leaving behind vast showers of particles in the detectors. Tracing these particle showers back to two bottom quarks (and then figuring out which ones came from a Higgs boson) is extremely delicate and labyrinthine work.

“Being able to identify and isolate bottom quarks in the experimental data is a huge challenge and required precise detector calibration and sophisticated b-quark tagging,” says Piacquadio. “We were only able to do these analyses thanks to years of work that came before.”

To spot this process, the ATLAS and CMS collaborations each combined data from the first and second runs of the LHC and then applied complex analysis methods to the data.

“Finding just one event that looks like two bottom quarks originating from a Higgs boson is not enough,” says Chris Palmer, a scientist at Princeton who worked on the CMS analysis. “We needed to analyze hundreds of thousands of events before we could illuminate this process, which is happening on top of a mountain of similar-looking background events.”

According to Palmer, these deceptive background events made the analyses almost impossible to perform based on isolated bottom quarks alone.

“Luckily, there are a few Higgs production mechanisms that produce identifiable particles as byproducts,” Palmer says. “We used these particles to tag potential Higgs events and separate them out from everything else. So we really got a two-for-one deal with this analysis because not only did we find the Higgs decaying to bottom quarks, but we also learned a lot about its production mechanisms.”

The next step is to increase the precision of these measurements so that scientists can study this decay mode with a much greater resolution and explore what secrets the Higgs boson might be hiding.