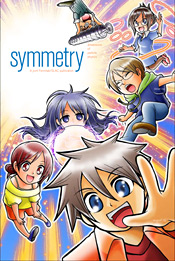 We've been calling this our Manga issue because it highlights the work of Takuya Uruno, who created a physics Manga series for kids for the Japanese laboratory KEK--featured in our gallery--and also drew us a gorgeous Manga cover.

-- Youhei Morita on Manga as a learning tool.

-- A choreographer translates conversations with CERN physicists into dance

-- Building better heart valves, the first in a new series on applications of accelerator technology

-- As always, our departments: Signal to Background, highlights from symmetry breaking, a 60-second explanation of Cherenkov light, thoughts on physics, technology and culture from the editor-in-chief, and a logbook from the discovery of the weak neutral current. The mathematical framework that predicted the weak neutral current became known as the Standard Model of particles and their interactions.