Superman may have superpowers, but Batman has the ingenuity to be just as heroic with the help of gadgets. Scientists at CERN are channeling the Dark Knight to try to make their biggest gadget, the Large Hadron Collider, perform a feat that counters its very design principles but may give them a better understanding of the early universe. They’ll have about 40 hours total to make it work.

Instead of colliding two beams of protons or two beams of much heavier lead ions, as the LHC usually does, operators will try to collide one of each in the coming weeks. On October 31, they will test the process for 16 hours, and two weeks later they’ll get another 24. That’s all the time they decided they could take from the precious month of data-collecting they will give the experiments during the upcoming lead-lead run. If it works, a proton-lead ion research program could be in place for November 2012.

The scientists undertaking the task of colliding protons and lead want to collect benchmark information about single beams of lead ions to get a better picture of what’s going on in lead-lead collisions. For that, the tiny proton acts as a probe of the more massive lead ion.

Theorist Urs Wiedemann explained that it’s a bit like making soup. A meticulous chef wants to know exactly what happens at each step of a recipe. This includes both the initial state of the individual ingredients – onions sautéed or raw? – as well as the final outcome inside the pot. Otherwise the chef can’t make informed changes. Similarly a physicist needs to know the individual properties of both of the elements he or she wants to collide, as well as what their smashing produces, in order to get the full picture for analysis.

After years of experiments, the quarks and gluons in the proton are well characterized; those in the lead ion are not. So, in a proton-lead ion collision, all unexpected effects can be attributed to the lead ion. With this knowledge, scientists will be able to make predictions about lead-lead collisions. “I can only test my theory of ion collisions if I know what is collided,” Wiedemann said. Colliding a proton with a heavy ion serves to “switch off the confounding factors,” he said. 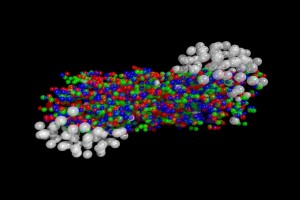 Colliding protons and lead ions also gives scientists the potential to discover new physics phenomena, Wiedemann said. For this reason, all the experiments around the ring are interested in taking data during the collisions.

Scientists still need to test whether the technique will work in the LHC, said accelerator physicist John Jowett. The machine was built with a 2-in-1 magnet design: Both beams are controlled with the same magnetic field. This helps keep everything inside the ring symmetric when the beams inside match. Collisions and kicks, when one beam’s electromagnetic field pushes the other beam slightly off course, happen in the same place on each turn, a fundamental principle of stability for circular accelerators.

Protons and lead ions have different masses and charges, so they are not equally affected by the same magnetic field. The biggest challenges in this type of run are to inject and then control the beams as they ramp up from low to high energy. At lower energies, a beam of protons makes one extra lap around the LHC every 15 seconds. Since a proton beam makes about 11,000 laps per second, this discrepancy is small. But it is still enough to shift where the proton and lead-ion beams kick each other with every turn. As energy in the accelerator increases to its peak of 3.5 TeV and the beams get closer to light speed, however, relativity makes the 15 seconds stretch out little by little. At some point the difference between the beams becomes small enough that it can be overcome with a minor adjustment in their orbits – essentially the proton ends up going just a bit farther than the lead does, so they both take the same time to make one revolution. 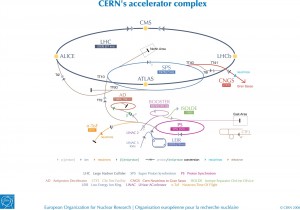 To further complicate things, the more intense the beams get, the worse the effects each beam has on the other. The need to reach a certain level of intensity, roughly a measure of the amount of particles in a beam, puts a limit on how much data the experiments can extract. So, even if researchers can manage to inject two different beams in the accelerator, they will also need to make them with enough intensity for the method to be considered feasible.

The accelerator does have built-in flexibility despite having only one magnetic field: It has independent RF systems for each beam. These adjust electromagnetic frequencies inside a special cavity at one point around the ring, which controls each beams’ speed and orbit length. The LHC also has a powerful automatic feedback system that reacts to effects in the pipe by serving counter-kicks. This helps to keep the beams stable.

The LHC physicists plan to take baby steps – but fast ones, given the strict time constraints. First, they will simply try and inject two different elements into the LHC. If that works, they’ll try accelerating the beams. Only after that would they consider attempting actual proton-lead ion collisions.

“I hope it all works and we’re not prevented by mundane effects” such as a power outage, Jowett said. “In a month from now we should know the answer.”