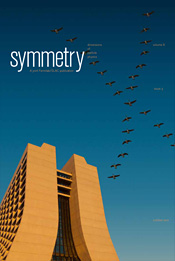 This month marks the 50th issue of symmetry magazine, which published its first issue in Oct/Nov 2004. It quickly established its own quirky style with a cover of a little girl in jammies dragging an Einstein bear.

This time around our cover shows Fermilab’s iconic Wilson Hall and an equally iconic wedge of flying geese—make that two wedges, arranged with help from Photoshop—forming an X against the sky.  That’s X as in Project X, a proposed $1.8 billion accelerator complex that would put Fermilab at the forefront of the Intensity Frontier—a realm in which scientists bring incredible numbers of particles into collision to search for extremely rare processes with a big physics impact.  Our lead feature, “Solving for X,” explains this project and its potentially far-reaching impacts.

Also in this issue:

--  Do we live in a hologram?  An experiment at Fermilab aims to find out.

-- Scientists build an experiment called NOvA in the Minnesota wilderness to study neutrinos.

-- What about those neutrinos, anyhow? A deconstruction of neutrino science distills what scientists know, what they hope to learn and how that knowledge could change our view of the universe.

-- Yet another use for particle accelerators: printing cereal boxes.

--  A 60-second explanation of symmetry—the concept, not the magazine.

Plus, as usual, an assortment of colorful briefs—Atom Smasher beer, anyone?—and highlights from our blog.