So much for the stereotype that seriously smart people can't have a sense of humor.

The acclaimed CBS prime-time comedy Big Bang Theory had a guest appearance by a Nobel Laureate on its March 9 show. 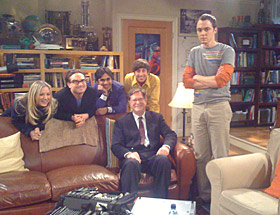 George Smoot (in Sheldon's seat, no less!) on the set of Big Bang Theory. Photo courtesy of George Smoot.

George Smoot, professor of physics at the University of California, Berkeley, research physicist at Lawrence Berkeley National Laboratory, and a confessed fan of the show, agreed to appear in the episode. The two main characters, Leonard and Sheldon, meet up with Smoot at a conference in California where he is the keynote speaker.

The show features the antics of particle physicists and astrophysicists, so Smoot was a natural fit.

Smoot won the Nobel Prize in Physics in 2006 for his work with NASA's John Mather on the Cosmic Background Explorer (COBE) satellite, which made the first measurements of temperature fluctuations in the microwave background radiation. He is a member of the National Academy of Sciences.

The UC Berkeley News highlights Smoot's recent accomplishments and visit to the show. You can view a behind the scenes clip of Smoot on the set here.

Science has become increasingly popular and accurate in pop culture television and movies with the help of scientists advising producers and actors.

The Wall Street Journal last year dissected the formula for the comic success of the show, which averages 9 million viewers a week, as did science writer Jennifer Ouellette, author of The Physics of the Buffyverse.