Do neutrinos and antineutrinos behave differently?

Stretch out your hand, and a trillion neutrinos cross it within three seconds. Yet very little is known about these invisible particles, despite enormous progress in the field of neutrino physics over the last two decades. Scientists now know that neutrinos have mass and that they can morph from one type into another--a process called neutrino oscillation or neutrino mixing. But numerous questions remain.

This Thursday, the MiniBooNE collaboration at the Department of Energy's Fermi National Accelerator Laboratory released a preliminary result that sheds more light on neutrino oscillations. This is the collaboration's first result with antineutrinos, the antiparticles of neutrinos. The MiniBooNE experiment uses 1280 photomultiplier tubes to detect neutrinos interacting in a tank of mineral oil.

But the LSND neutrino observation did not fit in with neutrino oscillations measured at other experiments. One possible explanation: the existence of a fourth type of neutrino.

Scientists specifically designed the MiniBooNE experiment to resolve the LSND dilemma. In April 2007, the MiniBooNE collaboration announced its first results obtained with neutrinos. The experiment could not confirm the LSND result.

But that wasn't the end of the story. Instead, MiniBooNE found an excess of electron neutrinos emerging from its primary beam of muon neutrinos at neutrino energies lower than what would be expected under a simple two-neutrino mixing interpretation of LSND data. (symmetry published an article on this puzzling observation.)

The 2007 result opened up the door for new questions. Is the low energy excess observed by MiniBooNE in neutrino mode due to some misestimated background? Is it due to some new physics? Can it be related to the LSND anomaly observed for antineutrinos? After all, there might be a difference between the oscillation of antineutrinos and that of neutrinos... 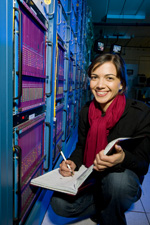 While theorists have been pondering possibilities, the MiniBooNE experiment has been busy collecting new data with a predominantly antineutrino beam. This, however, takes a lot longer. In the antineutrino mode, data are acquired five times slower than in the neutrino mode as antineutrinos interact differently with ordinary matter than neutrinos.

"It's much harder to accumulate enough statistics with antineutrinos. That's why we started our experiment in neutrino mode. Because of its setup, LSND didn't have the neutrino option," said Steve Brice, spokesperson for the MiniBooNE collaboration.

On Thursday, Georgia Karagiorgi, MIT, the lead graduate student on the antineutrino oscillation analysis, presented the first results from a blind analysis of MiniBooNE antineutrino data. The sparse data, which have large statistical uncertainties associated with them, show no excess of antineutrino events. In fact, the electron antineutrino signal candidates found in the data are in agreement with the underlying background prediction, even in the low-energy region.

Given the large low-energy excess observed in the MiniBooNE neutrino data in 2007, the lack of a corresponding excess in the antineutrino data is quite intriguing. "One can make different hypotheses to explain the excess observed in the MiniBooNE neutrino mode," Brice said. "Some predicted an excess for our antineutrino data as well, some not."

With regard to the LSND signal, the lack of statistical power of the MiniBooNE antineutrino result precludes any strong conclusions. The best fit includes nearly all of the LSND-allowed parameter space as well as the null hypothesis.

The single largest improvement that MiniBooNE can make to produce a more conclusive result is to gather more antineutrino data. The experiment is scheduled to run well into 2009. This will increase its antineutrino data sample by 50 percent.