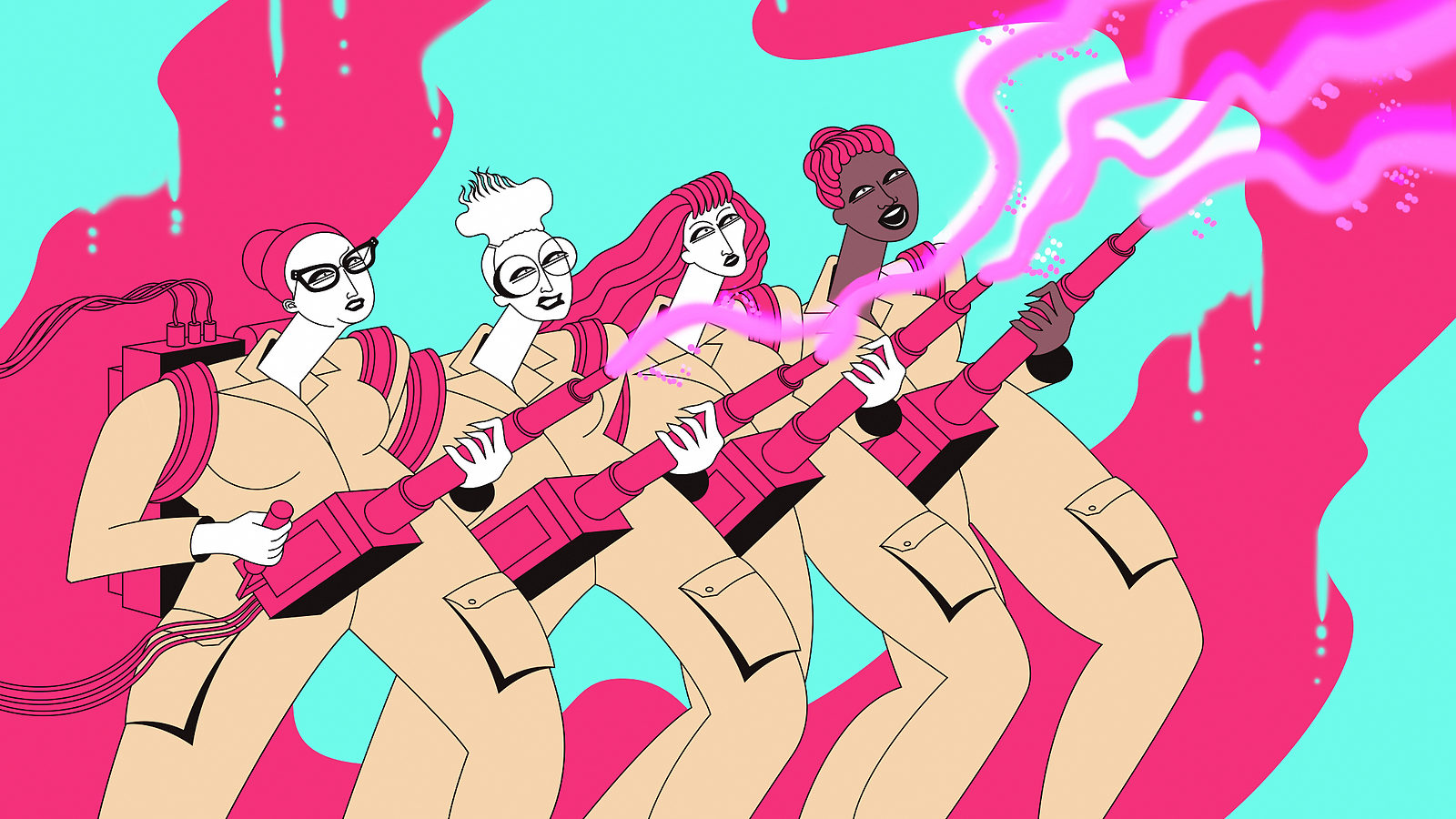 Who you gonna call? MIT physicists!

As science advisors, physicists Lindley Winslow and Janet Conrad gave the Ghostbusters crew a taste of life in the lab.

Tonight, two MIT scientists are going to the movies. It’s not just because they want to see Kristen Wiig, who plays a particle physicist in the new Ghostbusters film, talk about grand unified theories on the big screen. Lindley Winslow and Janet Conrad served as science advisors on the film, and they can’t wait to see all the nuggets of realism they managed to fit into the set.

The Ghostbusters production team contacted Winslow on the advice of The Big Bang Theory science advisor David Saltzberg, who worked with Winslow at UCLA.

Winslow says she was delighted to help out. As a child, she watched the original 1984 Ghostbusters on repeat with her sister. As an adult, Winslow recognizes that she became a scientist thanks in part to the capable female characters she saw in shows like Star Trek.

The Ghostbusters crew was filming in Boston, and “they wanted to see what a particle physics lab would be like,” Winslow says. She quickly thought through the coolest stuff she had sitting around: “There was a directional neutron detector Janet had. And at the last minute, I remembered that, in the corner of my lab, I had a separate room with a prototype of a polarized Helium-3 source for a potential future electron-ion collider.”

MIT postdoc James Maxwell, now a staff scientist at Jefferson Lab, wound up constructing a replica of the Helium-3 source for the set.

But the production team was interested in more than just the shiny stuff. They wanted to understand the look and feel of a real laboratory. They knew it would be different from the sanitized versions than often appear onscreen.

Winslow obliged. “I take them to this lab, and it’s pretty… it looks like you’ve been in there for 40 years,” she says. “There’s a coat rack with a whole pile of cables hanging on it. They were taking a ton of pictures.”

The team really wanted to get the details right, down the books on the characters’ shelves, the publications and grant proposals on their desks and the awards on their walls, Winslow says. That’s where Conrad’s contributions came in. Offering to pitch in as Winslow prepared to go out on maternity leave, Conrad rented out her entire office library to the film, and she wrote papers for two characters, Wiig’s particle physicist and a villainous male scientist.

Conrad made Wiig’s character a neutrino physicist. She decided the bad guy would probably be into string theory. There’s just something sinister about the theory’s famous lack of verifiable predictions, Winslow says.

String theorists can also be lovely people, though, Conrad says, and “I wanted to make [the bad guy] as evil as possible.” In the scientific paper she wrote for his desk, “he doesn’t acknowledge anyone. He just says ‘The author is supported by the Royal Society of Fellows,’ and that’s it.”

Also, she wrote for him “an evil letter where he’s turning someone down for tenure.”

Winslow wrote the text for the awards that adorn the characters’ office walls, though both she and Conrad point out that physicists rarely hang their awards at work. “I give mine to my mom, and she hangs them up,” Conrad says.

In their offices, both Winslow and Conrad plan to hang their official Ghostbusters thank-you notes. “And a coat hook,” Winslow says. “I need a coat hook.”

Neither physicist got the chance to see the film before today, and they’re not sure how much of their handiwork will actually make it to the big screen. But Winslow was thrilled to see in a recently released preview one of her proudest contributions: a giant set of equations written on a whiteboard behind Wiig’s character.

The equations are real, representing the Georgi-Glashow model, otherwise known as SU(5), the first theory to try to combine the electroweak and strong forces. The model was ruled out by results from the Super Kamiokande experiment, but Winslow imagines Wiig’s character is using it to introduce her own attempt to unite the fundamental forces.

Winslow says she explained the basics of SU(5) to Ghostbusters director Paul Feig, who was then left to pass along the message to Wiig when Winslow needed to pick up her 3-year-old son from daycare.

As they head to the theaters tonight, Conrad and Winslow say they are excited to see bits of their lives reflected on the Ghostbusters set. They’re even more excited for girls in the audience to see themselves reflected in the tech-savvy, adventurous women in the film.