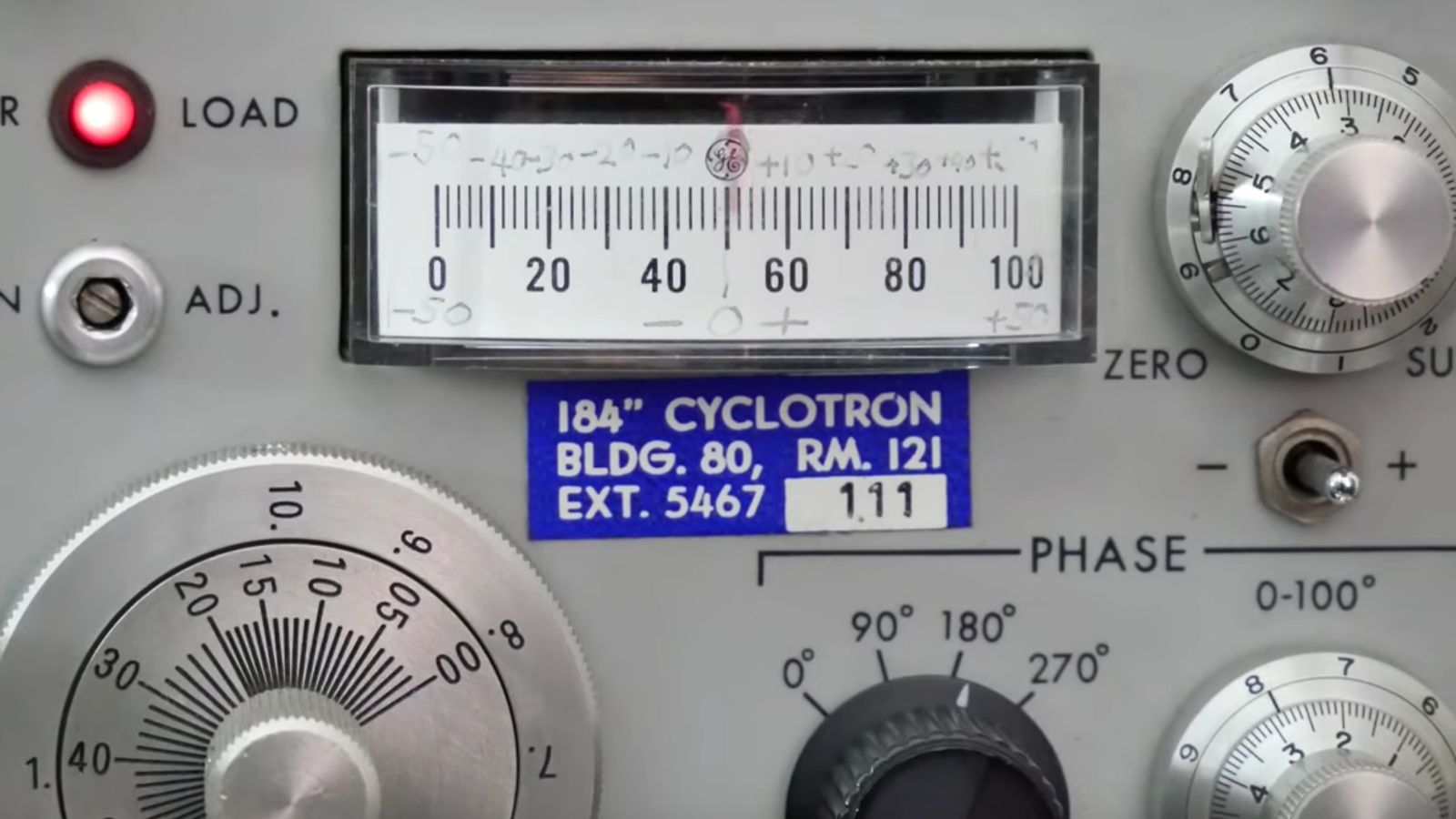 In May 2019, a Berlin-based, classically-trained symphony composer with a fondness for converting old scientific gear into musical instruments posted to a discussion forum: “Any nuclear scientists here? 184[-inch] cyclotron question.”

In a single photo, he presented a mystery: His latest find was a ’70s-era piece of equipment labeled a “LOCK-IN AMPLIFIER” featuring analogue displays, four dials of varying sizes, and a neat blue sticker label reading “184” CLYCLOTRON, BLDG. 80, RM. 121, EXT. 5467.” Could anyone help him find the story behind it?

Stefan Paul Goetsch, who uses the name Hainbach when creating electronic music, posted the plea hoping the equipment might be traceable via the label. He had no idea that blue sticker would provide a clear connection to a major piece of scientific history.

A cyclotron is a particle accelerator that uses a circular magnet to accelerate charged particles in a spiral from its center. And, it turns out, there was just one 184-inch cyclotron: a masterpiece that cyclotron-inventor E.O. Lawrence built in the afterglow of his 1939 Nobel Prize in honor of the technology.

During World War II, research at this cyclotron was essential to the Manhattan Project. After the war, it was converted into a synchrotron—an accelerator in which particles travel in a fixed loop instead of a spiral—that was key to early research into pions and mesons.

Goetsch picked up the unit in an eBay auction from a user called Tminus7, who frequently sells scavenged test equipment like the amplifier. Tminus7 says he picked it up at a surplus auction from University of California, Berkeley.

“There might be oscilloscopes, power supplies, all kinds of oddball equipment and buyers bid on the pallet,” he explains in an email. “Frankly it’s pretty neat acquiring all this equipment with stickers all over it that shows it has a real history.”

Lock-in amplifiers are used to find signals that are buried in noise, isolating and amplifying them. After running across Goetsch’s photo of the lock-in amplifier online, nuclear engineering graduate student Kathy Shield led a brainstorming session with her peers at UC Berkeley and Lawrence Berkeley National Laboratory to try to figure out how, exactly, the equipment could have been used at the cyclotron.

Their most plausible theory was that the unit, called a PAR 220, may have been monitoring  extremely minute oscillations of the magnetic field inside magnets that accelerated charged particles. Even an early-generation lock-in amplifier may have been able to monitor those oscillations down to the nanovolt.

But when was this equipment used? And what was the cyclotron doing at the time? Internet detectives began to narrow down the possibilities.

Construction of the cyclotron began in 1940, and its last run took place on December 29, 1987, so the PAR 220 must have been used sometime within that window. Reddit user /u/CakeLie42 noted that the earliest it could have been used was in 1962, when the first commercial lock-in amplifiers were manufactured, and that the latest was in 1977, when Princeton Applied Research (the “PAR” in PAR 220) was acquired by another company.

Richard Burdett, product specialist at AMETEK SIGNAL RECOVERY, the company now responsible for the amplifier’s descendants, offered further clues. He pointed out that the LED overload indicator on the PAR 220 was only part of the modules manufactured between 1973 and 1975.

By that time, the 184-inch cyclotron had started its third career: accelerating particles for medical treatment and research. In 1973 the cyclotron was upgraded with a unit where patients could be situated for particle therapy.

That year the cyclotron also saw upgrades to help stretch and focus the particle beam, along with the creation of additional experimental bays, which may have necessitated the installation of the then-new PAR 220. In 1974 and 1975, scientists further upgraded the cyclotron’s medical capacities to include helium ion radiography, another possible reason to install the PAR 220. Room 121 has since been renovated into a high bay, but current building occupants believe it used to be a cyclotron control room.

The mystery of the PAR 220’s historical purpose was mostly solved. But Goetsch had new plans for the amplifier: He wanted to use it to make music.

“Every lock-in amplifier has its own sound,” Goetsch says. “The sound of these machines was just out of this world because they were designed for the absolute maximum. They were designed to shoot rockets in the sky or to listen to particles.”

“All the materials that are in there such as coils and vacuum tubes are carefully selected and fine-tuned. The range that these instruments offer both in the frequency that they put out and the volume is unheard of in musical equipment.”

In a video, Goetsch gives the PAR 220 a short ping as a trigger-signal that sets the whole machine resonating in a hypnotic, driving beat. “It’s a great audio processor, because that is what it was meant to do!” he laughs. He describes the PAR 220 as “The Beast of Princeton” and “the gnarliest and most interesting sounding module I’ve found.”

Adjusting the four knobs—meant to control the phase, sensitivity, time constant and reference signal—now allows the module to be played from a resonating bass buzz that could drive a dance floor into a frenzy up to a stuttering high-pitched chirp.

“It will give me so much back,” he says. “It has a texture that’s absolutely unique.”

Using scientific equipment as a musical instrument is not without its hazards. “I’ve had a few things go up in smoke,” Goetsch admits. He makes a point of outlining safety concerns when he makes videos about transforming test equipment like the amplifier into musical instruments.

But even the failures can be fascinating, he says. “Some units break so beautifully that their swan song is just amazing because it unlocks hidden layers of distortion that sing with overtones.”

Despite the difficulties in acquiring new equipment, figuring out how to play it, and occasionally losing it in a catastrophic failure, Goetsch says he loves this work.

“It’s very much zeitgeist,” he says, “as it’s the repurposing of abandoned equipment that would be thrown away.”

His PAR 220 unit was destined for the landfill until Goetsch found a new use for it. “All these machines, they get lost unless someone comes along and does something beautiful with them again.”