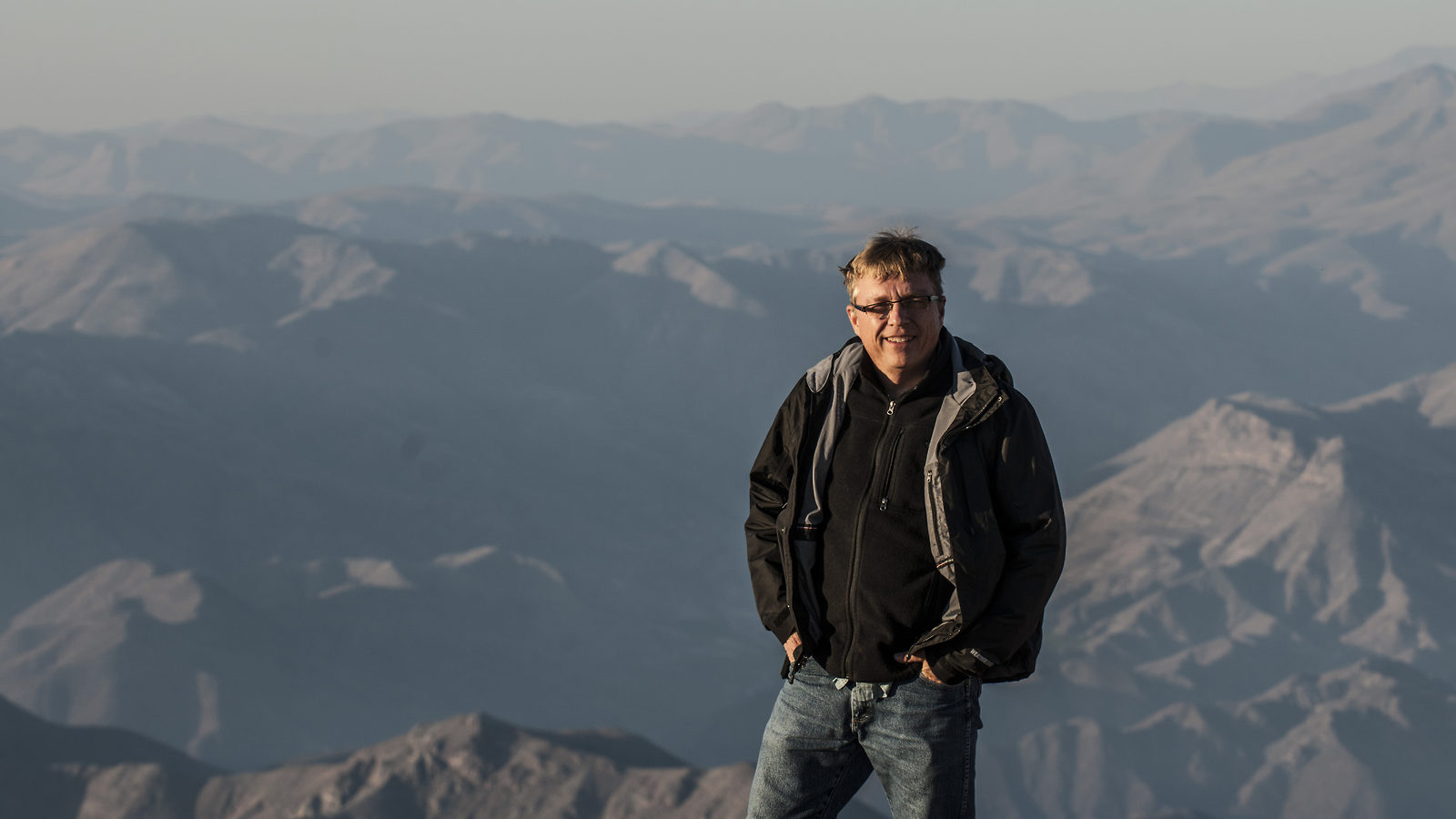 Science can produce astounding images. Arcs of electricity. Microbial diseases, blown up in full color. The bones of a long-dead beasts. The earth, a hazy blue marble in the distance.

But scientific progress is not always so visually dramatic. In laboratories in certain fields, such as high-energy particle physics, the stuff that excites the scientists might be hidden within the innards of machinery or encrypted as data.

Those labs need visual translators to show to the outside world the beauty and significance of their experiments.

Reidar Hahn specializes in bringing physics to life. As Fermilab’s house photographer, he has been responsible for documenting most of what goes on in and around the lab for the past almost 30 years. His photos reveal the inner workings of complicated machinery. They show the grand scale of astronomical studies.

Hahn took up amateur photography in his youth, gaining experience during trips to the mountains out West. He attended Michigan Technological University to earn a degree in forestry and in technical communications. The editor of the school newspaper noticed Hahn’s work and recruited him; he eventually became the principal photographer.

After graduating, Hahn landed a job with a group of newspapers in the suburbs of Chicago. He became interested in Fermilab after covering the opening of the Tevatron, Fermilab’s now-decommissioned landmark accelerator. He began popping in to the lab to look for things to photograph. Eventually, they asked him to stay.

Hahn says he was surprised by what he found at the lab. “I had this misconception that when I came here, there would be all these cool, pristine cleanrooms with guys in white suits and rubber gloves. And there are those things here. But a lot of it is concrete buildings with duct tape and cable ties on the floor. Sometimes, the best thing you can do for a photo is sweep the floor before you shoot.”

Hahn says he has a responsibility, when taking photos for the public, to show the drama of high-energy physics, to impart a sense of excitement for the state of modern science.

Below, he shares the techniques he used to make some of his iconic images for Fermilab. 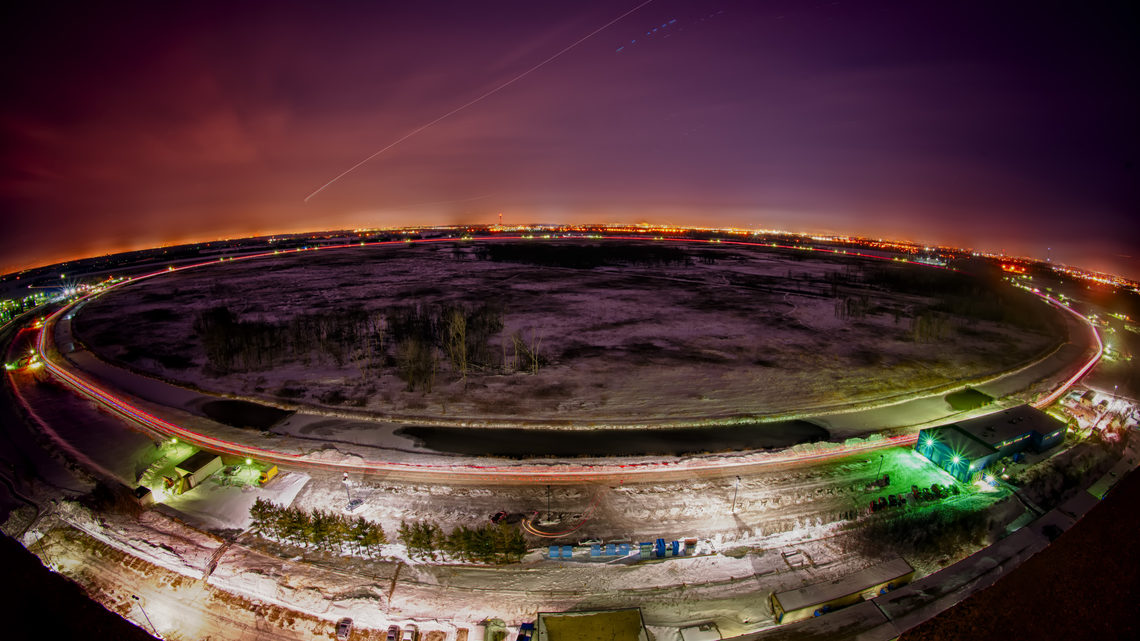 “I knew they were going to be shutting down the Tevatron—our large accelerator—and I wanted to get a striking or different view of it. It was 2011, and it would be big news when the lab shut it down.

“It took a little time to prepare and think out. I could have shot it in the daylight, but it wouldn’t have had as much drama. So I had fire trucks and security vehicles and my wife driving around in circles with all their lights on for about half an hour. The more lights the better. I was on the 16th floor roof of the high-rise [Fermilab’s Wilson Hall]. I had some travelling in other directions, because if they were all going counter-clockwise, you’d just see headlights on the left and taillights on the other end. They were slowly driving around—10, 15 miles an hour—and painting a circle [of light] with their headlights and taillights.

“This image shows a sense of physics on a big scale. And it got a lot of play. It got a full double spread in Scientific American. It was in a lot of other publications.

“I think particle physics has some unique opportunities for photography because of these scale differences. We’re looking for the smallest constituents of matter using the biggest machines in the world to do it.” 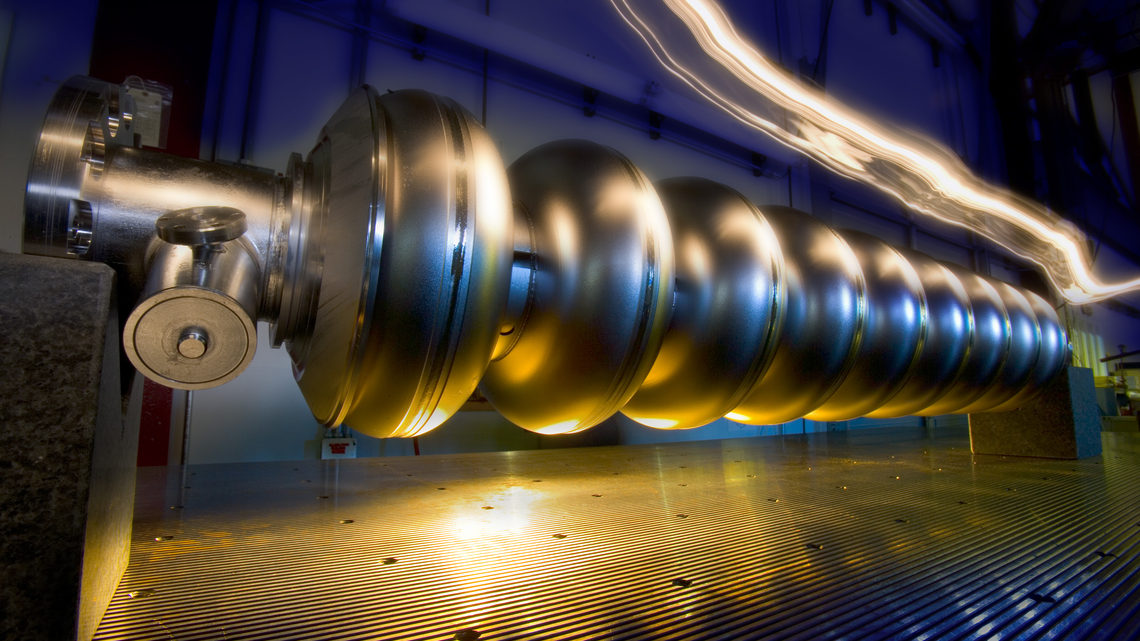 “This was an early prototype superconducting [radio-frequency] cavity, which is used to accelerate particles. Every one of those donuts there forces a particle to go faster and faster. In 2005, these cavities were just becoming a point of interest here at Fermilab.

“This was sitting in a well-lit room with a lot of junk around it. They didn’t want it moved. So I had to think how I could make this interesting. How could I give it some motion, some feel that there’s some energy here?

“So I [turned] all the room lights out. This whole photo was done with a flashlight. You leave the shutter open, and you move the light over the subject and paint the light onto the subject. It’s a way to selectively light certain things. This is about four exposures combined in Photoshop. I had a flashlight with different color gels on it, and I just walked back and forth.

“I wanted something dynamic to the photo. It’s an accelerator cavity; it should look like something that provides movement. So in the end, I took the gels off, and I dragged the flashlight through the scene [to create the streak of light above the cavity]. It could represent a [particle] beam, but it just provides some drama.

“A good photo can help communicate that excitement we all have here about science. Scientists may not use [this photo] as often for technical things, but we’re also trying to make science exciting for the non-scientists. And people can learn that some of these things are beautiful objects. They can see some kind of elegance to the equipment that scientists develop and build for the tools of discovery.” 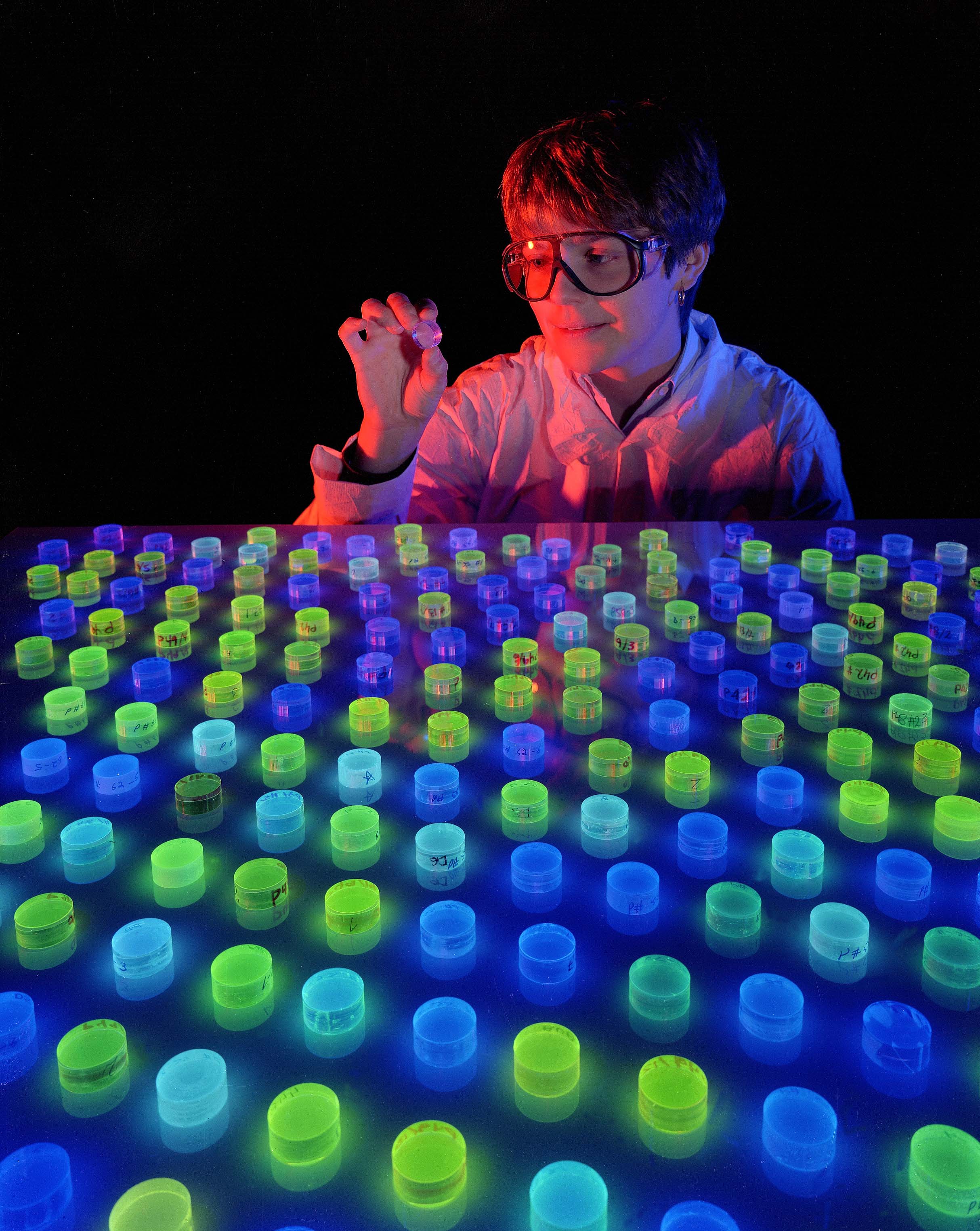 “This is a chemist here at the lab, and she's worked a lot on different kinds of scintillating compounds. A scintillator is something that takes light in the invisible spectrum and turns it to the visible spectrum. A lot of physics detectors use scintillating material to image particles that you can't normally see.

“[These] are some test samples she had. She needed the photo to illustrate various types of wave-shifting scintillator. I wanted to add her to the photo because—it all goes back to my newspaper days—people make news, not things. But the challenge gets tougher when you have to add a person to the picture. You can’t have someone sit still for three minutes while making an exposure.

“There’s a chemical in this plastic that wave-shifts some type of particle from UV to visible light. So I painted the scintillating plastic with the UV light in the dark and then had Anna come over and sit down at the stool. I had two flashes set up to light her. [The samples] all light internally. That’s the beauty of scintillator materials.

“But it goes to show you how we have to solve a lot of problems to actually make our experiments work.” 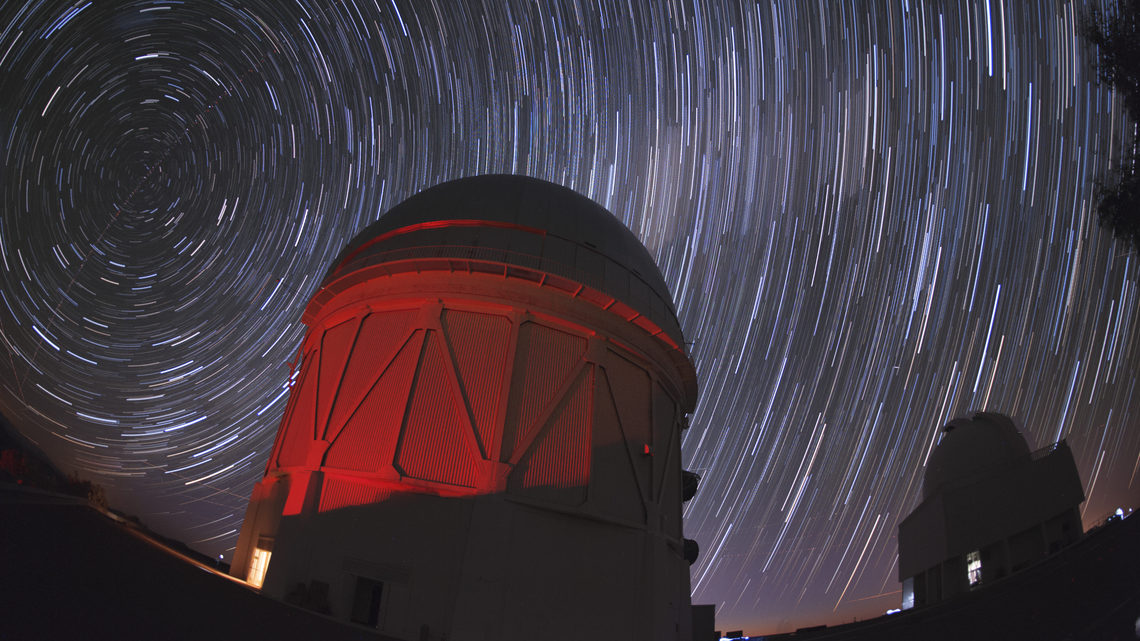 “This is the Cerro Tololo [Inter-American] Observatory in Chile, taken in October 2012. We have a lot of involvement in the Dark Energy Survey, [a collaboration to map galaxies and supernovae and to study dark energy and the expansion of the universe]. Sometimes we get to go to places to document things the lab’s involved in.

“The Earth spins. When you point a camera around the night sky and happen to get the North Star or Southern Cross—this is the Southern Cross—in the shot, you can see how the Earth rotates: This is what people refer to as star-trails. It’s a good reminder that we live in a vast universe and we’re spinning through it.

“We picked a time when there’s no moon because it’s hard to do this kind of shot when the moon comes up. Up on the top of the mountain, they don’t want a lot of light. We walked around with little squeeze lights or no lights at all because we didn’t want to have anything affect the telescopes. But every once in awhile I would notice a car go down from the top, and as it would go around the corner, they’d tap the brake lights. We learned to use the brake lights to light the building. It gives some drama to the dome.

“You’ve got to improvise. You have to work with some very tight parameters and still come back with the shot.”