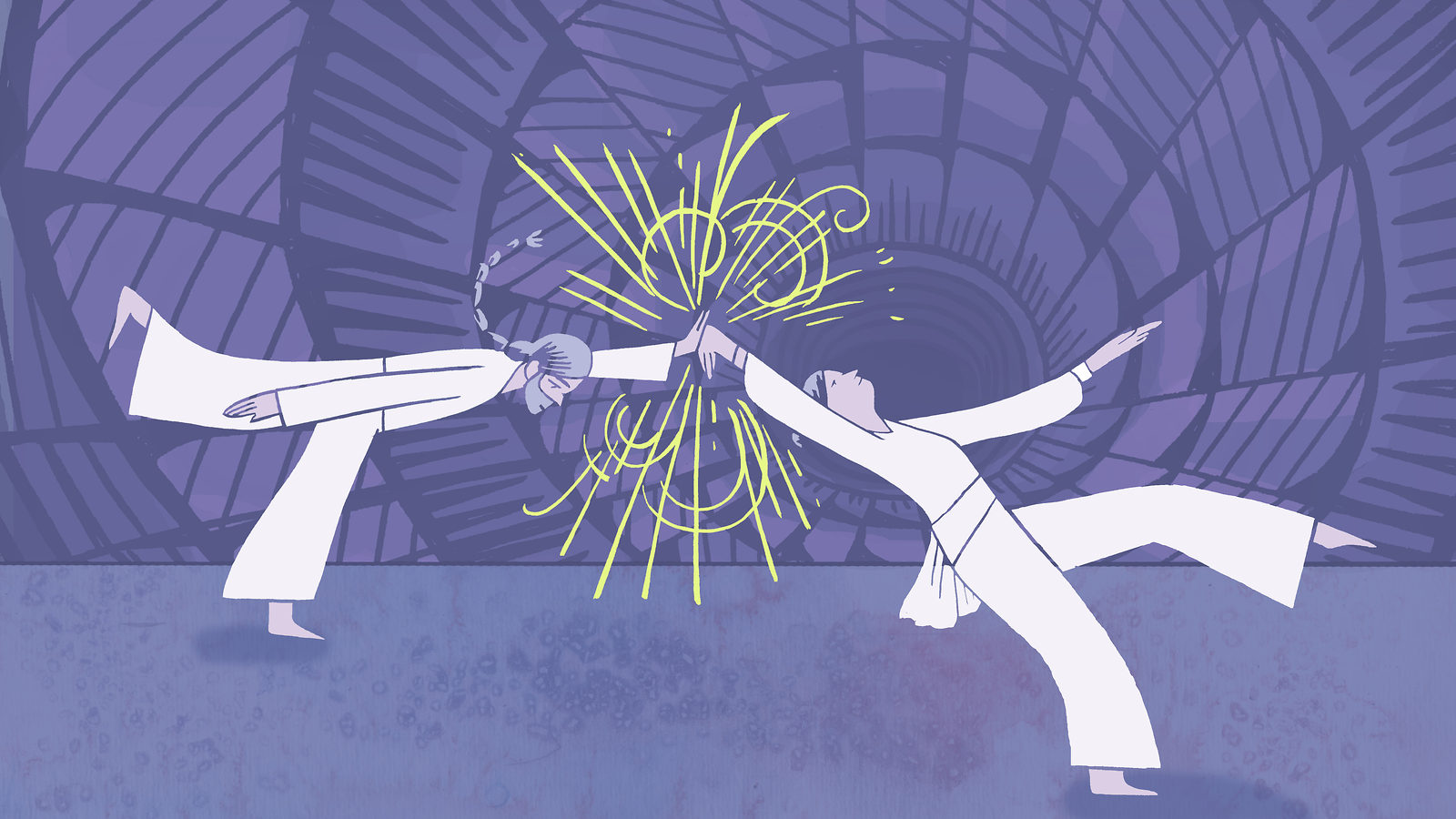 The dance of the particles

In collaboration with a scientist, an Iranian dancer is working to communicate the beauty of particle physics through dance.

Although CERN physicist Andrea Latina had always been interested in the arts, he had never really thought about dance before.

While at a local film festival in 2015, he happened upon a flyer that quoted Persian poet Rumi about the “dance of particles.” Curious, he reached out to its author, Iranian dancer and choreographer Sahar Dehghan, to learn more.

Dehghan says that even as a child she was fascinated by both physics and dance.

When she moved to France at a young age, she started taking dance classes, focusing on a meditative form called Sufi dancing and later concentrating on contemporary dance. But she also kept her fascination with physics, reading books and articles and having conversations with scientists she befriended in Paris as a young adult.

“I became interested in quantum mechanics and its relation to physics, and I really started experimenting physically in my dance with a lot of these concepts,” she says.

Dehghan and Latina developed a friendship, meeting to chat about physics and dance.

Dehghan says that she was inspired by ideas such as the confinement of quarks via the strong force.

“If you try to separate quarks, this force will be so strong that new particles will be created to prevent separation,” Latina says. “The density of energy is so high that a new pair of quark and antiquark will form so that the new quarks pair up with the original ones, just to avoid there being a single quark isolated in nature.”

In the winter of 2016, Dehghan visited CERN to learn more about its goals and how scientists are working to achieve them. One of the most inspiring things, she says, was seeing thousands of scientists from different backgrounds uniting to further our understanding of the universe.

“There are more than 11,000 people of more than 110 nationalities coming together with a common goal,” she says. “Instead of seeing superficial differences caused by cultural, religious, political or sexual preference, they respect and collaborate with each other, learning from each other for a greater purpose.”

Latina says that conversations with Dehghan gave him insight into physics as well.

“I’m very enthusiastic about CERN and my work,” he says. “In drawing parallels between ancient philosophies, Sahar reminded me that what we are doing is the same thing humans have been doing for millennia: questioning where we come from, where we are going and what our role in the universe is. She was able to evoke this ancestral wonder and help me rediscover the poetry of what we do at CERN. We are incessantly trying to answer the same questions; we just use different tools and the language of mathematics.”

Dehghan says she would love to communicate these themes through dance. Through artistic mediums, she says, new ideas can be heard, seen and felt in a deeper, more meaningful way.

“It would be great if we could all see beyond our own illusions into the fascinating particle interactions happening in everything and everyone at all times and the true unity that connects us in this great quantum dance, whirling at all times in rhythm with the music of the entire cosmos,” she says.

She has begun to choreograph a show called WHIRL Quantum Dance. Through scenes in her show, she tries to illustrate concepts such as quantum chromodynamics (with colored lights) or quantum entanglement (with pairs of dancers). She is even trying to create a collision scene with spinning dancers in a large circle representing an accelerator.

“I am not a scientific expert in anything so I am not trying to teach anyone,” she says. “What I want to do with this show is open some doors for the audience to go out there and search for more and learn about not just about quantum and particle physics, but also go out there and physically experiment and see how we’re all connected.

“Even if I open just one door for one person in the audience to go in that direction, I will have achieved my goal.”

WHIRL: Quantum Dance, which is being presented by Sangram Arts, will premiere in the San Francisco Bay Area at the School of Arts & Culture at Mexican Heritage Plaza on September 22 and 23, with dancers Shahrokh Moshkin Ghalam and Rakesh Sukesh. Dehghan says that she hopes to make a film of the show to tour at different venues in cities around the world.