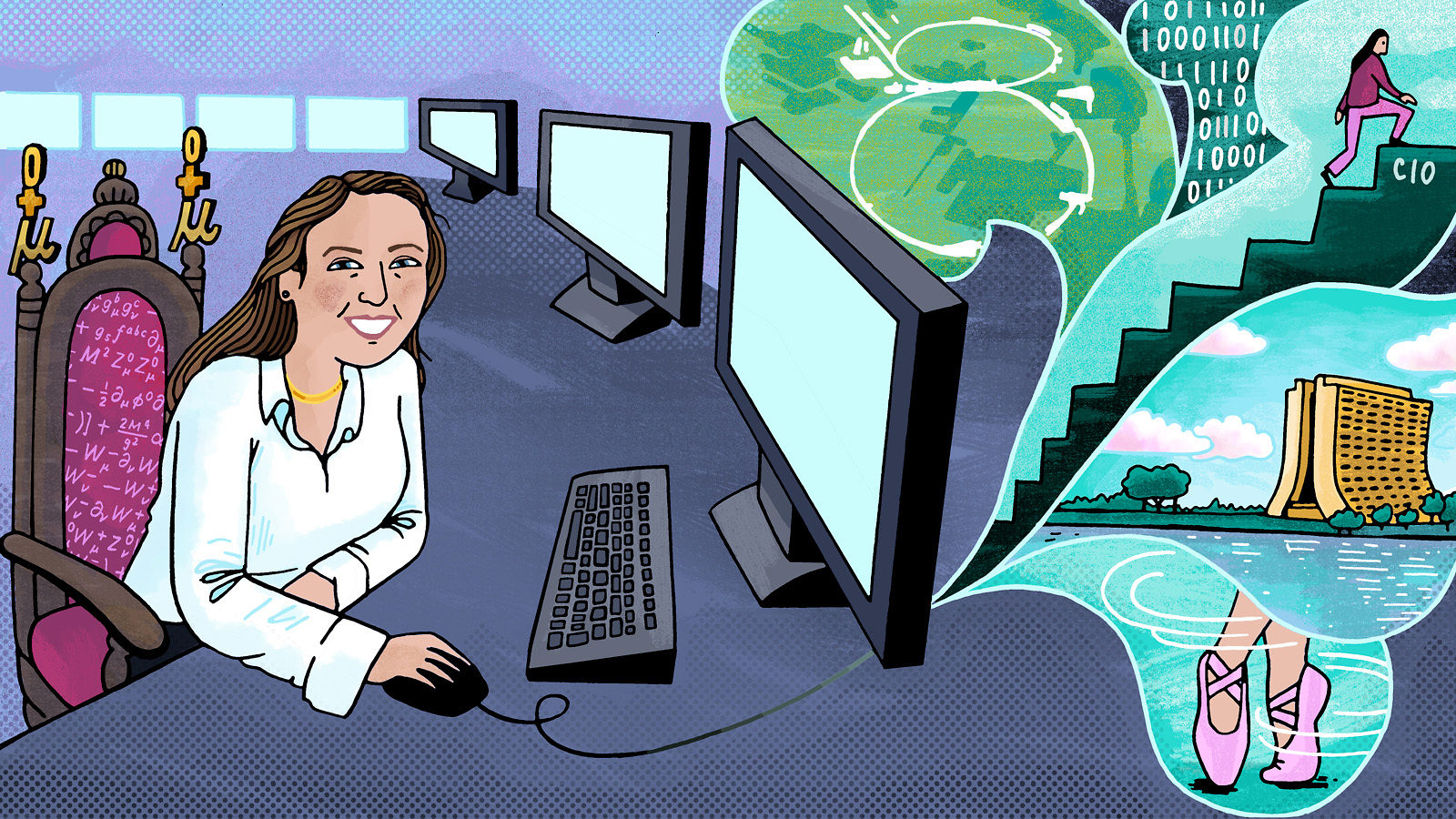 Fermilab’s Liz Sexton-Kennedy talks to Symmetry about her lifelong drive to learn and how it led to her current role as Chief Information Officer for Fermilab.

Liz Sexton-Kennedy first came to Fermilab as an intern during her sophomore year at Rutgers University.

She went on to a PhD program in physics at University of California, San Diego, then spent some time teaching at a community college there, but when she saw a chance to return to the lab, she took it.

In 1988 she joined the Data Acquisition Group for the CDF experiment at Fermilab’s Tevatron particle collider. She rose through the ranks, and in April 2018 was named the lab’s Chief Information Officer.

Jim Daley of Symmetry spoke to Sexton-Kennedy about her experiences in STEM, her career at Fermilab, and a bit about herself.

What was something that first got you interested in science?

I was a young, impressionable kid when I first saw [the 1977 short film] “Powers of Ten.” The concept that there were dimensions to the world that we couldn't see, or that there were things out there that we couldn’t understand because we can only see so many stars when we look up, the idea that the cosmos could be thought about in a whole, organic sort of way—all of that was new and fascinating to me when I was a kid.

I was the oldest of four kids, and my parents didn’t have time to tutor me, and so relative to a lot of my classmates when I started school, I was behind. But in sixth grade, I had one particular science and math teacher, Mr. Moore, who was very influential in my life. He made it cool to be good at math and science.

When I went to high school, I knew I wanted to be taking calculus by my senior year, so I talked my way into getting into the most advanced algebra class they offered. The class was self-paced. I finished the whole year in half a year.

Was that alienating, or empowering, or both?

I think it was alienating. There was a dimension of being a female there, because the instructor literally thought I was not understanding the material and that was why I was having trouble paying attention. Actually, I was just bored.

After high school, you did an internship at Fermilab, right?

That was my second year of college.

My first year of college, they placed me into a set of classes that weren’t very challenging for me. I had done a full year of college-level calculus when I was a senior in high school.

I went to the head of the math department. He was very surprised at this young woman just standing up for herself and saying, “I don’t care if you don’t give me the credit, I want to be in this advanced class because this one is boring me to tears.”

So they placed me in a more advanced physics class with a smaller class size and a teacher who knew how to challenge a class. So that was fun for me.

I took the sophomore year electronics class. I did well in that class, and the professor needed someone to come out to Fermilab because two of their graduate students were getting married to each other [and would both be out at the same time].

The internship gave me a taste of what this career would be like if I were to continue in this direction, so that made me think differently when I got to graduate school. By graduate school I was completely determined.

It seems you were a determined person from a very young age.

From a very young age, but my determination in the early years was just to learn as much as I possibly could. Being paid to learn was a strange concept to me!

Do you have thoughts on the kinds of barriers that are still presented to women and girls in STEM?

It’s definitely still there. I have three daughters; they’ve all encountered it.

My husband was a genius, and they got some of his genius genes, and they grew up in a household where people were talking science at the dinner table all the time. But for whatever reason they were definitely discouraged in math.

My oldest daughter was lucky to have a high school biology and chemistry teacher who really encouraged her, so she’s a doctor now. She’s a resident at UIC now.

My middle daughter was much more interested in the human psyche, and she went into psychology. Now she’s in law school.

Do you think there's a role for an institution like Fermilab in supporting young people who are facing barriers?

Yeah, I think there is, because certainly when I came here when I was 19, I was immersed in a group where I was treated as an equal. I was lucky because I landed in an experiment that had a high fraction of female scientists. In a collaboration of 20, I can name five or six women off the top of my head.

I think one of the things that Fermilab brings—or any big institution that is aware of these biases—is the idea of a meritocracy. People want to succeed in the sciences, and they want to bring in the best people to get them there.

I'm not saying there aren't politics here, but in the end, the data and the cogent argument win in any dispute.

What developments are you excited about in high-energy physics computing?

I think for software and computing, we’ve been really successful over the years, especially in high-energy physics. The Large Hadron Collider experiments have needed a worldwide network of interconnecting centers that all cooperate and satisfy the needs of their high-data throughput users. We’ve managed to stay ahead of the curve, and when you’re in the thick of the battle you don’t realize how far you’ve come.

Building on that success is exciting. There’s no way we can reach our science goals unless we can solve some of the challenges that are coming up.

The physics driving the silicon chip manufacturing is reaching limits. There’s a physical limit that we're approaching with the materials we have, the leakage currents.

People are talking about different technologies like quantum computing and neuromorphic computing, but both are 15 years out. Fermilab and other labs are looking at what you can do with mid-scale noisy quantum.

Getting a qubit to operate like a computer seems impossible, but maybe that means we’re just making the wrong assumptions. Maybe you shouldn’t make it operate like a computer. Maybe the answer is: It will always be something that you have to design the problem for, and the role of traditional computers will still continue to be there forever.

What’s interesting is that the nature of computing has to change in order for us to continue doing the science we've done in the past. That’s going to require a lot of human effort, and that’s kind of exciting, to marshal our forces to meet that challenge.

What hobbies do you enjoy?

I did ballet for over 35 years, and I hope to get back to it. I’ve been doing a lot of singing. I’m in a choir at church and I sing with the Fermilab choir every once in a while. I sang for an HEP-version of “The Monster Mash” with the choir for Symmetry in October.

Are there parallels between the challenges in ballet and your career in STEM?

I would say so. It takes a certain amount of putting up with the pain and perseverance in both.

What advice might you have for young people and young women in STEM?

I would say that perseverance is key, and don’t let anybody tell you that you are not worthy or that you have not the appropriate skills or talents to do something if you think you can do it. Have confidence in yourself and do it.