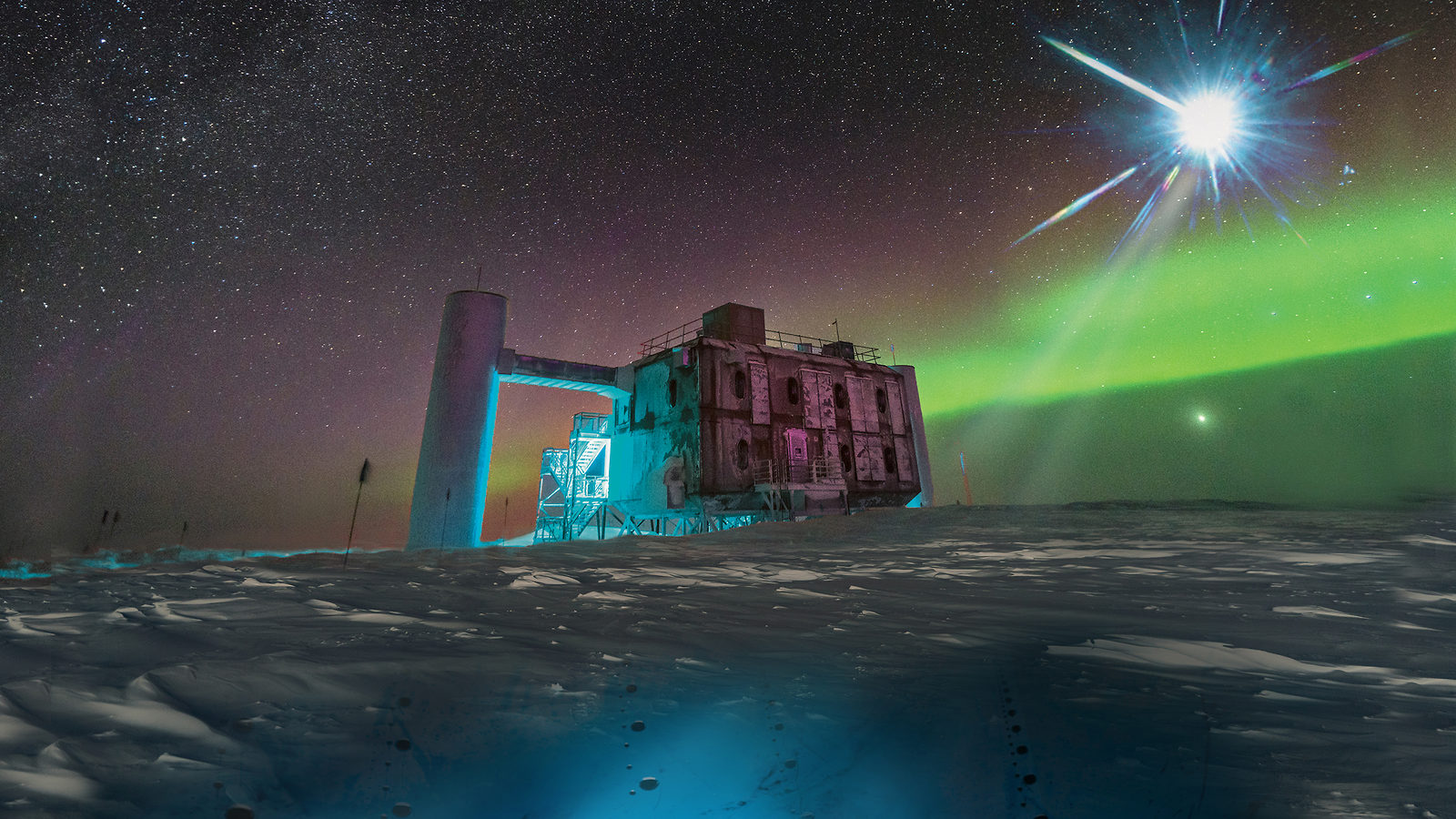 On September 22, 2017, a tiny but energetic particle pierced Earth’s atmosphere and smashed into the planet near the Amundsen-Scott South Pole Station in Antarctica. The collision set loose a second particle, which lit a blue streak through the clear ice.

Luckily for science, the first particle was a neutrino, and the strike occurred within the cubic kilometer that makes up the IceCube neutrino experiment. Its detectors recorded the hit and sent out a public alert. The trail of light left behind by the second particle, a muon, pointed back to an intriguing object 4 billion light-years away: a violent, particle-flinging galaxy called a blazar, powered by a supermassive black hole.

This is the first time scientists have found evidence of the birthplace of an ultra-high-energy cosmic neutrino. And it is the second big result—after an August 2017 blockbuster from the Laser Interferometer Gravitational-Wave Observatory and a band of additional experiments—in what scientists are calling a new era of multi-messenger astronomy.

In multi-messenger astronomy, experiments work together to study two or more different kinds of signals, such as gamma rays and neutrinos, from a single highly energetic event in a galaxy far away, says Regina Caputo, analysis coordinator for the Fermi Gamma-ray Space Telescope’s Large Area Telescope instrument.

“When telescopes first came out, you could only use optical light—what you see,” she says. “The next step was seeing other wavelengths of light: infrared, ultraviolet, X-ray, gamma ray. Now, seeing neutrinos and gravitational waves from a single source tells us even more.”

Because none of these multi-messenger astronomical signals has an electromagnetic charge, all of them travel through the universe unaffected by magnetic fields. Their paths are predictable, meaning scientists can trace them back to where they came from.

Out of this world

A computer cluster at the South Pole sends out an automatic public alert whenever the IceCube detector catches a neutrino with so much energy that it must have come from outside Earth’s solar system. IceCube found its first two such particles—nicknamed “Bert” and “Ernie”—in 2013.

Before then, “nobody took neutrinos seriously as an astronomical messenger,” says Naoko Kurahashi Neilson, an assistant professor at Drexel University and co-convener of the group that searches for neutrino sources on IceCube. For about a century, scientists had been collecting detections of ultra-high-energy particles from space—but all of them were charged particles called cosmic rays, not neutrinos.

“Before IceCube, we had never seen a high-energy neutrino emission from the universe,” Kurahashi Neilson says.

Now “we have about eight of those per year,” says IceCube physicist Ignacio Taboada, an associate professor at Georgia Tech and Kurahashi Neilson’s fellow co-convener.

IceCube was finally detecting ultra-high-energy neutrinos, but until September, no experiment had been able to figure out where they were coming from.

“My opinion is that most of the sources of these neutrinos are so far away that it’s really difficult to observe their light or gamma rays,” Taboada says. “In this case, we got lucky and got one that is close enough.”

Using data collected by the Fermi Gamma-ray Space Telescope, Hiroshima University scientist Yasuyuki Tanaka was the first to link the neutrino to the blazar. The blazar in question had recently attracted the attention of the Fermi scientists by producing a higher flux of gamma rays than any of the 2000-some blazars they’ve seen in the last decade.

Next, scientists on the MAGIC telescope, located on the Canary Islands, made the same connection. “That triggered an avalanche of follow-ups,” Taboada says.

IceCube scientists followed up as well, searching back through 9.5 years of data to see if they had seen signs of the blazar before.

“It turns out, this part of the sky is special,” Kurahashi Neilson says. For four or five months starting in December 2014, IceCube detected an unusually large flux of neutrinos coming from that same area. They were also high-energy, but not nearly as energetic as the September 22 neutrino.

“The thing I find interesting about these two observations is how differently the blazar was behaving in each case,” Taboada says. In one, scientists caught one high-energy neutrino and copious gamma rays; in the other, the neutrinos were plentiful but the gamma rays were few.

The two findings, published in Science, reach a statistical significance of about 3 and 3.5 sigma, and together they paint a compelling picture.

IceCube scientists expect their participation in multi-messenger astronomy has only just begun. “It’s fascinating to think that just five years ago, we didn’t know for sure whether we would ever be able to detect gravitational waves or ultra-high-energy neutrinos,” Kurahashi Neilson says. “Now we’re talking about the possibility of finding a source in all three messengers.”