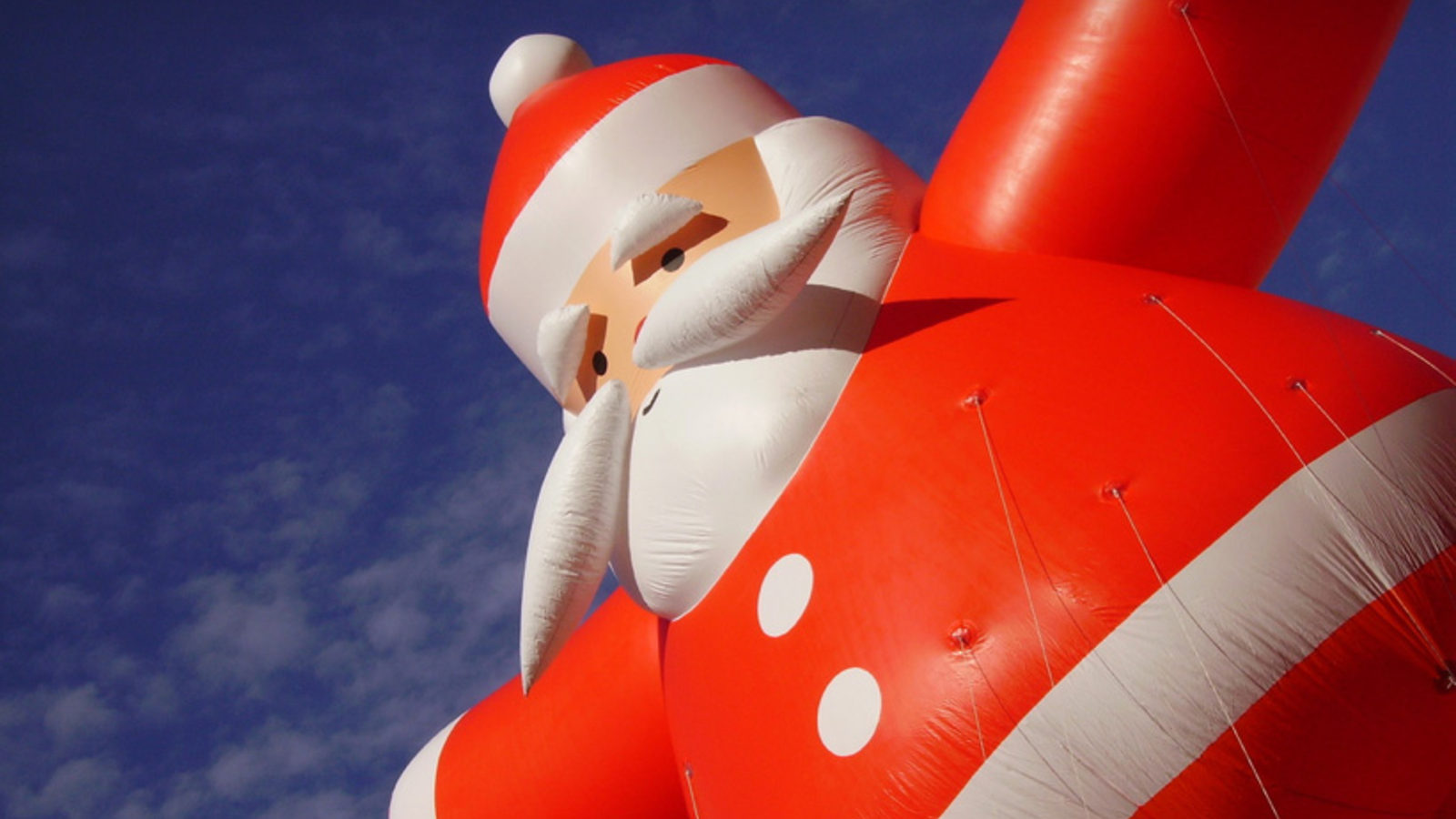 Santa at nearly the speed of light

This time of year, children who know their physics may start to question if Santa could possibly be real. As symmetry pauses for the holidays, we offer this thought experiment to put their hearts at ease.

About this time of year, inquisitive children of a certain age begin to question whether Santa is real. After all, Santa has a major delivery problem. There are some 2 billion children in the world expecting Christmas presents. Assuming an average of 2.5 children per household, then, Santa has to visit about 800 million homes scattered about the globe.

The distance Santa has to travel can be estimated from the following. First, while the surface area of Earth is about 1014 square meters, only about 30 percent of that is land mass, or about 0.3 x 1014 square meters. Second, we’ll assume, for simplicity’s sake, that the 800 million homes are equally distributed on this land mass. Dividing 0.3 x 1014 by 800 million gives 4 x 104 square meters occupied by every household (about six football fields); the square root of that is the distance between households, about 200 meters. Multiply this by the 800 million households to get the distance Santa must travel on Christmas Eve to deliver all the children’s gifts: 160 million kilometers, farther than the distance from here to the sun.

Thanks to the rotation of the earth, Santa has more time than children might initially think. Standing on the International Date Line, moving from east to west and crossing different time zones, Santa has not just 10 hours to deliver his presents (from 8 p.m., when children go to bed, until 6 a.m., when they wake up), but an extra 24 hours—34 hours in all.

Even so, Santa’s task is daunting.

Now, some have guessed that Santa accomplishes his task by traveling at a speed close to that of light—let’s say, 99.999999 percent of the speed of light. By traveling that fast, in fact, Santa can deliver all his presents in just 500 seconds or so, with plenty of time left over (the remainder of the 34 hours) to polish off the cookies the children have left him on their kitchen tables.

There are certain consequences, however, of Santa’s traveling at this frantic pace. For example:

First, children may not be able to see Santa racing across the dark night sky, but they may be able to see a trail of light caused by Cerenkov radiation, a phenomenon created when charged objects travel faster than the speed of light (which they can do in transparent media, but not in a vacuum). Since the basic component of our atmosphere is nitrogen, light is slowed to 99.97 percent of its usual speed of 300,000 kilometers per second. Santa travels faster than this and undoubtedly is charged; as a consequence, then, he will emit visible photons. (Unfortunately, that light will be obscured by the light caused by the friction created when Santa rushes through the atmosphere. Also, Santa might roast in all this heat, but we’ll presume that Santa’s sleigh, like a space capsule, has special protective shielding.)

Second, children will notice that as Rudolph, Santa’s lead reindeer, is rushing toward their homes, his nose is no longer red. The color depends on just how fast Rudolph is moving, turning yellow, then green, then blue, then violet, and finally turning invisible in the ultraviolet range as he accelerates to higher and higher speeds. This change in color is a well-known phenomenon, one that astronomers take advantage of to figure out the speeds with which the stars and galaxies in our expanding universe are moving with respect to us; from that information, the distances to these celestial objects can be deduced.

Children might also wonder why Santa never seems to age. From year to year, he retains his cherub face and merry laugh, his long white beard and his round belly that jiggles like a bowlfull of jelly. The fact is that for objects traveling at close to the speed of light, time slows down. So, the more packages Santa delivers, the more he’ll travel, and the more he’ll remain the same, carrying on the Christmas tradition for generations of children to come.

This is an excerpt from a holiday article that ran in the Fermilab publication Fermi News.

Ever wonder if a particle collider could give you a faster way to cook your turkey, or how much antimatter it would take to power your holiday lights?