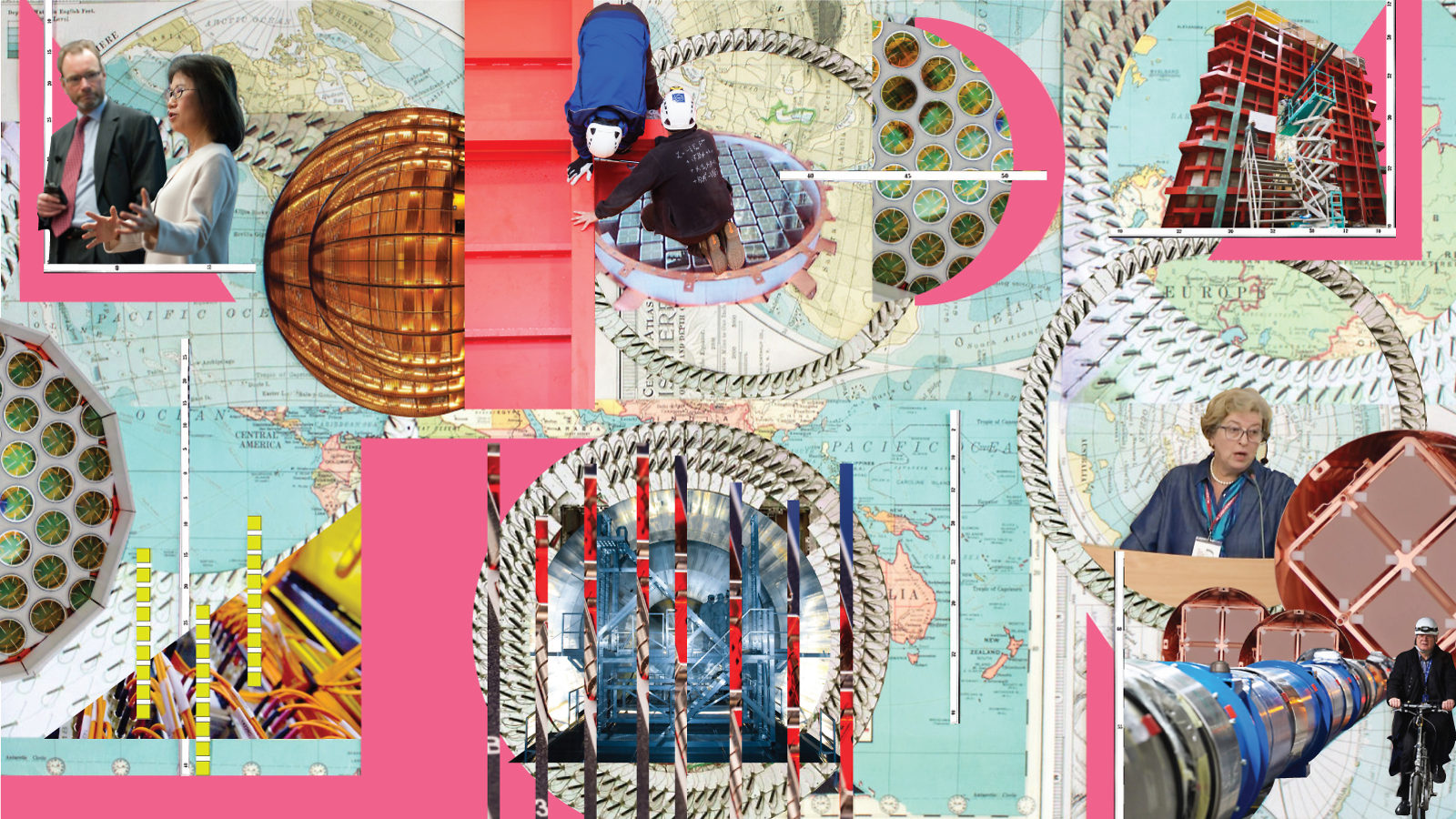 Physics projects are getting bigger, more global, more collaborative and more advanced than ever—with long lead times for complex physics machines. That translates into more international planning to set the course for the future.

The first European strategy launched in 2006 and was revisited in 2013. In 2019, teams will gather input through planning meetings in preparation for the next refresh.

Halina Abramowicz, a physicist who works on the ATLAS experiment at CERN’s Large Hadron Collider and the FCAL research and development collaboration through Tel Aviv University, is the chair of the massive undertaking. During a visit to Fermilab to provide US-based scientists with an overview of the process, she sat down with Symmetry writer Lauren Biron to discuss the future of physics in Europe.

What do you hope to achieve with the next European Strategy Update for Particle Physics?

Europe is a very good example of the fact that particle physics is very international, because of the size of the infrastructure that we need to progress, and because of the financial constraints.

The community of physicists working on particle physics is very large; Europe has probably about 10,000 physicists. They have different interests, different expertise, and somehow, we have to make sure to have a very balanced program, such that the community is satisfied, and that at the same time it remains attractive, dynamic, and pushing the science forward. We have to take into account the interests of various national programs, universities, existing smaller laboratories, CERN, and make sure that there is a complementarity, a spread of activities—because that’s the way to keep the field attractive, that is, to be able to answer more questions faster.

How do you decide when to revisit the European plan for particle physics?

Once the Higgs was discovered, it became clear that it was time to revisit the strategy, and the first update happened in 2013. The recommendation was to vigorously pursue the preparations for the high-luminosity upgrade of the [Large Hadron Collider]. The high-luminosity LHC program was formally approved by the CERN Council in September 2016. By the end of 2018, the LHC experiments will have collected almost a factor of 10 more data. It will be a good time to reflect on the latest results, to think about mid-term plans, to discuss what are the different options to consider next and their possible timelines, and to ponder what would make sense as we look into the long-term future.

The other aspect which is very important is the fact that the process is called “strategy,” rather than “roadmap,” because it is a discussion not only of the scientific goals and associated projects, but also of how to achieve them. The strategy basically is about everything that the community should be doing in order to achieve the roadmap.

What’s the difference between a strategy and a roadmap?

The roadmap is about prioritizing the scientific goals and about the way to address them, while the strategy covers also all the different aspects to consider in order to make the program a success. For example, outreach is part of the strategy. We have to make sure we are doing something that society knows about and is interested in. Education: making sure we share our knowledge in a way which is understandable. Detector developments. Technology transfer. Work with industry. Making sure the byproducts of our activities can also be used for society. It’s a much wider view.

What is your role in this process?

The role of the secretary of the strategy is to organize the process and to chair the discussions so that there is an orderly process. At this stage, we have one year to prepare all the elements of the process that are needed—i.e. to collect the input. In the near future we will have to nominate people for the physics preparatory group that will help us organize the open symposium, which is basically the equivalent of a town-hall meeting.

The hope is that if it’s well organized and we can reach a consensus, especially on the most important aspects, the outcome will come from the community. We have to make sure through interaction with the European community and the worldwide community that we aren’t forgetting anything. The more inputs we have, the better. It is very important that the process be open.

The first year we debate the physics goals and try to organize the community around a possible plan. Then comes the process that is maybe a little shorter than a year, during which the constraints related to funding and interests of various national communities have to be integrated. I’m of course also hoping that we will get, as an input to the strategy discussions, some national roadmaps. It’s the role of the chair to keep this process flowing.

Can you tell us a little about your background and how you came to serve as the chair for European Strategy Update?

That’s a good question. I really don’t know. I did my PhD in 1978; I was one of the youngest PhDs of Warsaw University, thus I’ve spent 40 years in the field. That means that I have participated in at least five large experiments and at least two or three smaller projects. I have a very broad view—not necessarily a deep view—but a broad view of what’s happening.

There are major particle physics projects going on around the world, like DUNE in the US and Belle II in Japan. How much will the panel look beyond Europe to coordinate activities, and how will it incorporate feedback from scientists on those projects?

This is one of the issues that was very much discussed during my visit. We shouldn’t try to organize the whole world—in fact, a little bit of competition is very healthy. And complementarity is also very important.

At the physics-level discussions, we’ll make sure that we have representatives from the United States and other countries so we are provided with all the information. As I was discussing with many people here, if there are ideas, experiments or existing collaborations which already include European partners, then of course, there is no issue [because the European partners will provide input to the strategy].

How do you see Europe working with Asia, in particular China, which has ambitions for a major collider?

Collaboration is very important, and at the global level we have to find the right balance between competition, which is stimulating, and complementarity. So we’re very much hoping to have one representative from China in the physics preparatory group, because China seems to have ambitions to realize some of the projects which have been discussed. And I’m not talking only about the equivalent of [the Future Circular Collider]; they are also thinking about an [electron-positron] circular collider, and there are also other projects that could potentially be realized in China. I also think that if the Chinese community decides on one of these projects, it may need contributions from around the world. Funding is an important aspect for any future project, but it is also important to reach a critical mass of expertise, especially for large research infrastructures.

This is a huge effort. What are some of the benefits and challenges of meeting with physicists from across Europe to come up with a single plan?

The benefits are obvious. The more input we have, the fuller the picture we have, and the more likely we are to converge on something that satisfies maybe not everybody, but at least the majority—which I think is very important for a good feeling in the community.

The challenges are also obvious. On one hand, we rely very much on individuals and their creative ideas. These are usually the people who also happen to be the big pushers and tend to generate most controversies. So we will have to find a balance to keep the process interesting but constructive. There is no doubt that there will be passionate and exciting discussions that will need to happen; this is part of the process. There would be no point in only discussing issues on which we all agree.

The various physics communities, in the ideal situation, get organized. We have the neutrino community, [electron-positron collider] community, precision measurements community, the axion community—and here you can see all kinds of divisions. But if these communities can get organized and come up with what one could call their own white paper, or what I would call a 10-page proposal, of how various projects could be lined up, and what would be the advantages or disadvantages of such an approach, then the job will be very easy.

And that input is what you’re aiming to get by December 2018?

How far does the strategy look out?

It doesn’t have an end date. This is why one of the requests for the input is for people to estimate the time scale—how much time would be needed to prepare and to realize the project. This will allow us to build a timeline.

We have at present a large project that is approved: the high-luminosity LHC. This will keep an important part of our community busy for the next 10 to 20 years. But will the entire community remain fully committed for the whole duration of the program if there are no major discoveries?

I’m not sure that we can be fed intellectually by one project. I think we need more than one. There’s a diversity program—diversity in the sense of trying to maximize the physics output by asking questions which can be answered with the existing facilities. Maybe this is the time to pause and diversify while waiting for the next big step.

Do you see any particular topics that you think are likely to come up in the discussion?

There are many questions on the table. For example, should we go for a proton-proton or an [electron-positron] program? There are, for instance, voices advocating for a dedicated Higgs factory, which would allow us to make measurements of the Higgs properties to a precision that would be extremely hard to achieve at the LHC. So we will have to discuss if the next machine should be an [electron-positron] machine and check whether it is realistic and on what time scale.

One of the subjects that I’m pretty sure will come up as well is about pushing the accelerating technologies. Are we getting to the limit of what we can do with the existing technologies, and is it time to think about something else?

To learn more about the European Strategy Update for Particle Physics, watch Abramowicz’s colloquium at Fermilab.