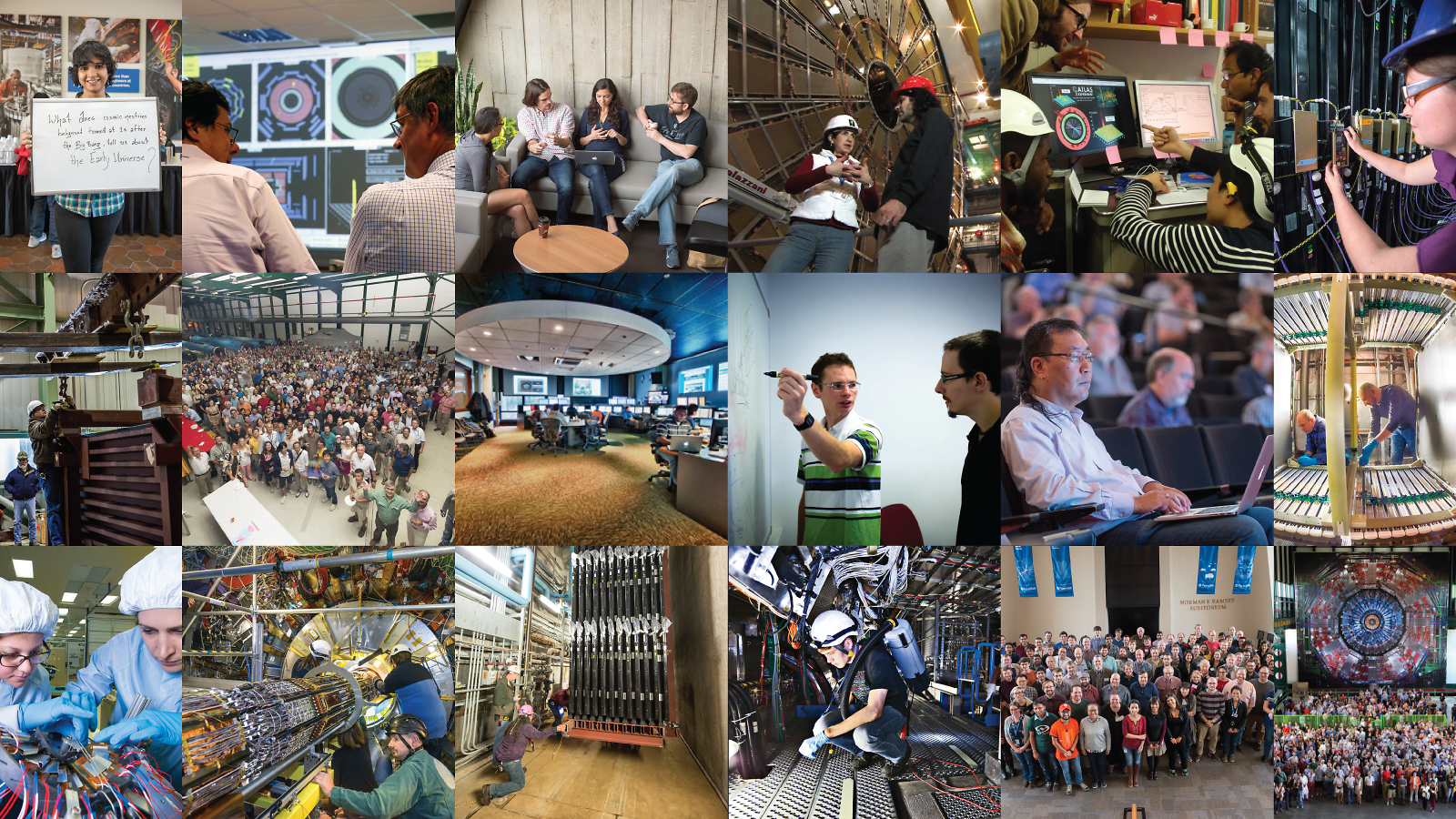 Photos by Fermilab and CERN

Putting the puzzle together

Successful physics collaborations rely on cooperation between people from many different disciplines.

So, you want to start a physics experiment. Maybe you want to follow hints of an as yet unseen particle. Or maybe you want to learn something new about a mysterious process in the universe. Either way, your next step is to find people who can help you.

In large science collaborations, such as the ATLAS and CMS experiments at the Large Hadron Collider; the Deep Underground Neutrino Experiment (DUNE); and Fermilab’s NOvA, hundreds to thousands of people spread out across many institutions and countries keep things operating smoothly. Whether they’re senior scientists, engineers, technicians or administrators, each of them has an important role to play.

Think of it like a jigsaw puzzle: This list will give you an idea about how their work fits together to create the big picture.

Dreaming up the experiment

Many particle physics experiments begin with a fundamental question. Why do objects have mass? Or, why is the universe made of matter?

When scientists encounter these big, seemingly inscrutable questions, part of their job is to identify possible ways to answer them. A large part of this is breaking down the big questions into a program of smaller, answerable questions.

In the case of the LHC, scientists who wondered about things such as undiscovered particles and the origin of mass designed a 27-kilometer particle collider and four giant detectors to learn more.

Each scientist in a collaboration brings their own unique perspective and skill set to the table, whether it’s providing an understanding of the physics or offering expertise in operations or detector design.

For example, engineers might have to figure out how the experiment should be supported mechanically or how to connect all the electrical systems and make signals available in a detector.

In the case of NOvA, which investigates neutrino oscillations, scientists needed a detector that was huge and free of dense materials, which made conventional construction techniques unworkable. They had to work with engineers who could understand plastic as a building material so they could be confident about using it to build a gigantic, free-standing structure that fit the requirements.

Technicians come in when the experimental apparatus and instrumentation are being built and often have complementary knowledge about what they’re working on. They build the hardware and coordinate the integration of components. It’s their work that, in the end, pulls everything together so the experiment functions.

Once the experiment is built, technicians are responsible for keeping everything humming along at top performance. When physicists notice things going wrong with the detectors, the technicians usually have first eyes on it. It’s a vital task, since every second counts when it comes to collecting data.

When designing and constructing the experiment, the scientists also recruit postdocs and grad students, who do the bulk of the data analysis.

Grad students, who are still working on their PhDs, have to balance their own coursework with the real-world experiment, learning their way around running simulations, analyzing data and developing algorithms. They also make sure that every part of the detector is working up to par.  In addition, they may work in instrumentation, developing new instruments and electronics.

Postdocs, on the other hand, have already worked on experiments and obtained their PhDs, so they typically assume more of a leadership role in these collaborations. Part of their role is to guide the grad students in a sort of apprenticeship.

Postdocs are often in charge of certain types of analysis or detector operations. Because they’ve worked on previous experiments, they have a tool kit and experience to draw on to solve problems when they crop up.

Postdocs and grad students often work with technicians and engineers to ensure everything is properly built.

The LHC produces about 25 petabytes of data every year, or 25 billion megabytes. If the average size of an MP3 is about one megabyte per minute, then it would take almost 50,000 years to play 25 petabytes of songs. In physics collaborations, computer scientists and engineers have to organize the computing networks to ensure against bottlenecks or traffic jams when this massive amount of data is shared.

They also maintain the software framework, which takes care of data handling and archiving. Say a scientist wants to know what happened on Feb. 27, 2015, at 3 a.m. Computing experts have to be able to go into the data catalogue and find, among the petabytes of data, where that event is stored.

Sorting out the logistics

One often overlooked group is the administrators.

It’s up to the administrators to sequence all the different projects so they get the funds they need to make progress. They sort the logistics to make sure the right people are in the right places working on the right things.

Administrators manage a group of people who are constantly coming and going. Is someone traveling to a site from a different institution? The administrators make sure that people get connected, work out itineraries and schedule where visiting scientists will live and work.

Translating discoveries to the public

While every single person involved in an experiment has a responsibility to effectively communicate with others, it can be challenging to communicate about research in a way that’s relatable to people from different backgrounds. That’s where the professional communicators come in.

Communicators can translate a paper full of jargon and complicated science into a fascinating story that the rest of the world can get excited about.

In addition to doing outreach for the public and writing press releases and pitching stories for the media, communicators offer coaching to people in a scientific collaboration on how to relay the science to a general audience, which is important for generating public interest.

Now that you know many of the pieces that must fall into place for a large physics collaboration to be successful, also know that none of these roles is performed in a vacuum. For an experiment to work, there must be a synergy of tasks: Each relies on the success of the others. Now go start that experiment!