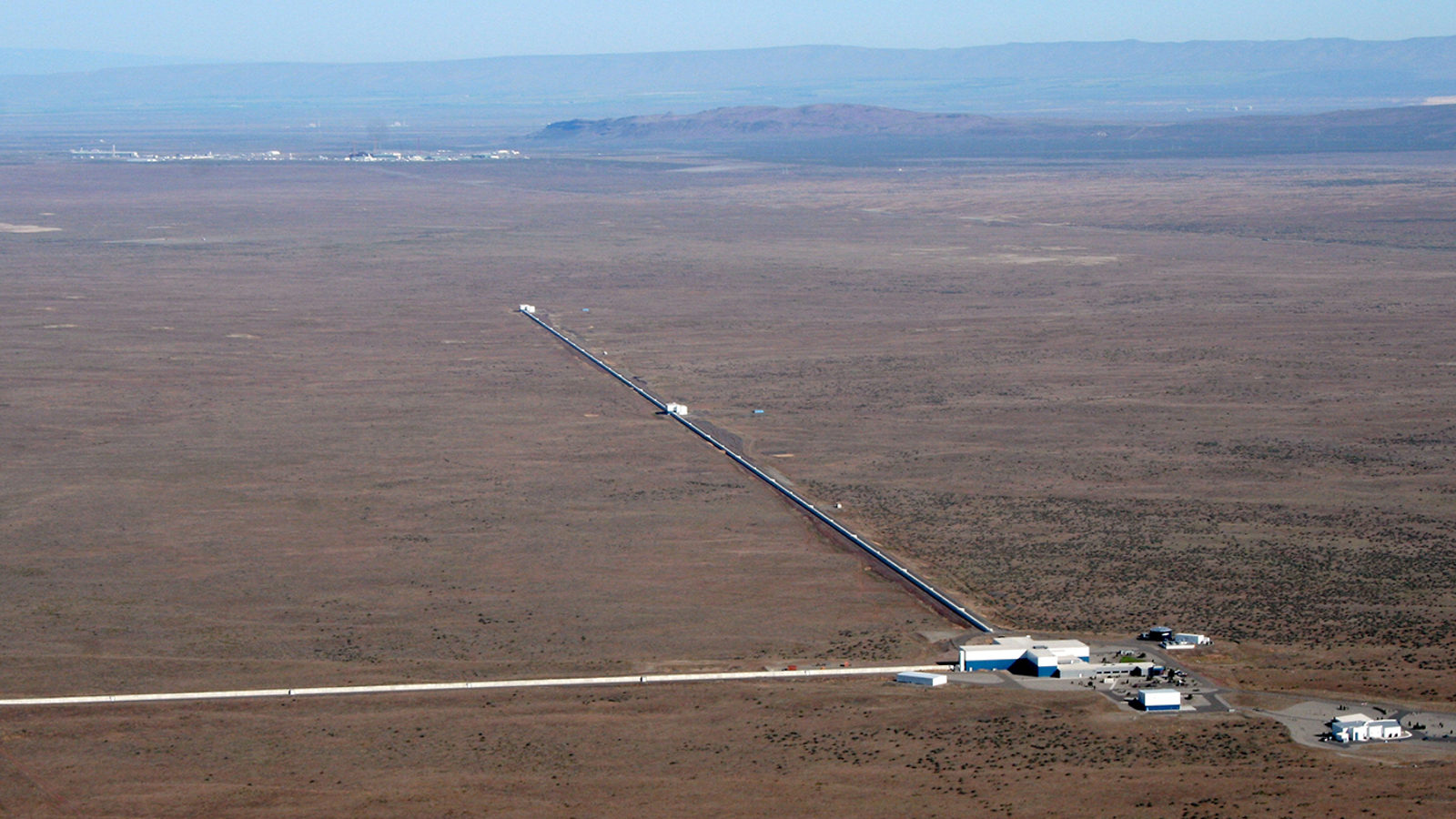 To catch a gravitational wave

Advanced LIGO, designed to detect gravitational waves, will eventually be 1000 times more powerful than its predecessor.

Thirty years ago, a professor and a student with access to a radiotelescope in Puerto Rico made the first discovery of a binary pulsar: a cosmic dance between a pair of small, dense, rapidly rotating neutron stars, called pulsars, in orbit around one another.

Scientists noticed that their do-si-do was gradually speeding up, which served as indirect evidence for a phenomenon predicted by Albert Einstein called gravitational waves.

Today in Livingston, Louisiana, and Hanford, Washington, scientists are preparing the next stage of a pair of experiments that they hope will detect gravitational waves directly within the next five years. They’re called the Laser Interferometer Gravitational-Wave Observatory, or LIGO.

Distorting the fabric of spacetime

Gravitational waves are faint ripples in the fabric of spacetime thought to propagate throughout the universe. According to the theory of general relativity, objects with mass—and therefore gravitational pull—should emit these waves whenever they accelerate. Scientists think the stars in the binary pulsar that Russell Hulse and Joseph Taylor discovered in 1974 are being pulled closer and closer together because they are losing miniscule amounts of energy each year through the emission of gravitational waves.

If a gravitational wave from a binary pulsar passes through Livingston or Hanford, the LIGO experiments will be waiting. In summer 2015, scientists will begin collecting data with Advanced LIGO, the next stage of LIGO, with more powerful lasers and attuned sensors. Advanced LIGO will by 2020 become 1000 times more likely than its predecessor to detect gravitational waves.

“We’ll be able to see well beyond the local group, up to 300 megaparsecs away, which includes thousands of galaxies,” says Mario Diaz, a professor at the University of Texas at Brownsville and director of the Center for Gravitational Wave Astronomy. ”That’s the reason why pretty much everyone agrees if gravitational waves exist then Advanced LIGO has to see them.”

Eventually joining LIGO in its attempt to catch a gravitational wave will be the VIRGO Interferometer at the European Gravitational Observatory in Italy and the Kamioka Gravitational Wave Detector at the Kamioka Mine in Japan. VIRGO started its search in 2007 and is currently undergoing upgrades. KAGRA is expected to begin operations in 2018. By the time KAGRA comes online, all three instruments should have similar levels of sensitivity.

LIGO is made up of two identical laser interferometers, one in Louisiana and the other in Washington.

At a laser interferometer, scientists take a single, powerful laser beam and split it in two. The two beams then travel down two equally long tunnels. At the end of each tunnel, each beam hits a mirror and reflects back.

The tunnels are perpendicular to one another, creating a giant “L.” Because of this, the reflected beams return to the same spot and cancel each other out. That is, unless a gravitational wave intervenes.

If a gravitational wave passes through, it will distort the fabric of spacetime in which the observatory sits. This will warp the physical distance between the mirrors, giving one of the laser beams the advantage in reaching its final destination first. Because the beams will not cancel one another out, they will produce a signal in the detector.

Advanced LIGO isn’t any bigger than LIGO, says Fred Raab of Caltech, head of the LIGO Hanford Observatory. Scientists are transforming the experiment from the inside. “That was part of the strategy for building LIGO... it’s the upgrades to technology that really counts.”

The impressive part, says Gabriela Gonzalez, LIGO spokesperson and professor at Louisiana State University, is the miniscule size of the change in distance and the technology’s capability to detect it.

“The [tunnels] are 4 kilometers long, and we have sensitivities to about 10-18 meters,” Gonzalez says. “We can tell how 4 kilometers one way differs from 4 kilometers the other way by a change that is a thousandth the size of a proton diameter.”

Scientists built two identical machines 1865 miles apart because the wavelength of the gravitational waves they’re looking for should be about that long; if they measure the same signal in both detectors simultaneously, it will be a good indication that the signature is genuine.

“The extra mirror allows us to apply a boost in sensitivity to a smaller range of frequencies in the search band,” Raab says. “It works kind of like the treble/bass adjustment in your car stereo. You still hear the music, but with different frequencies enhanced.”

Straight to the source

Scientists at Advanced LIGO would like to identify the sources of gravitational waves.

They most likely come from binary neutron stars like the one Hulse and Taylor discovered. But they could also originate in systems that right now exist only in theory, such as black hole binaries and neutron star-black hole binary systems.

Christopher Berry, a research fellow at the University of Birmingham, is part of a team that is designing a way to quickly estimate where in the sky the source of a gravitational wave might originate in order to share that information with astronomers around the world, who could take a closer look.

“You can analyze the data to determine quantities like mass, orientation and location,” he says. “One of the things we want to do with parameter estimation is quickly estimate where in the sky a source came from and then tell people with telescopes to point there.”

Gravitational waves could also come from the same systems that produce gamma-ray bursts, the brightest known electromagnetic events in the universe. Scientists think that gamma-ray bursts may come from merging binary neutron stars, a hypothesis LIGO could investigate.

Determining a link between gamma-ray bursts and binary neutron stars would be one outstanding achievement for Advanced LIGO, but the future observatory has potential for more, Berry says.

“We can see inside the sun using neutrinos, and gravitational waves are yet another way to look at the universe,” he says. “We can make discoveries we weren’t expecting.”