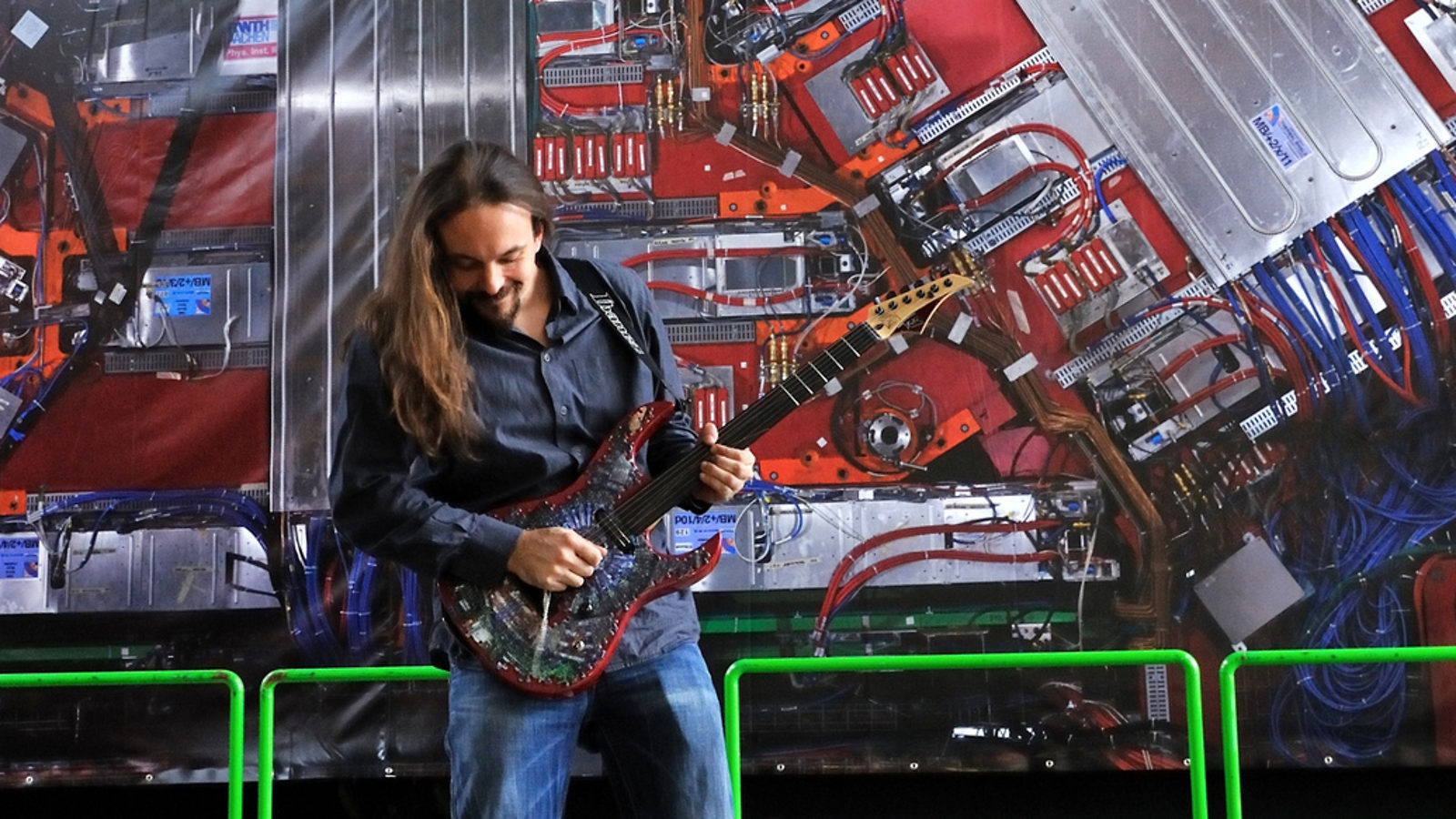 Research with flair at FameLab 2013

Young scientists presented their research in three entertaining minutes at this year’s Swiss semifinal round of Famelab 2013, hosted by CERN.

“And now presenting our next contestant on Swiss Idol, Piotr Traczyk,” said University of Michigan physicist and temporary Master of Ceremonies Steve Goldfarb.

A young man with long hair and with a red electric guitar slung across his shoulder strode across a stage in front of an audience gathered on March 16 at CERN laboratory, located on the border of Switzerland and France.

“Wait… This isn’t Swiss Idol,” Goldfarb said with mock chagrin. “This is FameLab! Can you talk about science?”

Traczyk displayed his guitar to the audience so they could see an ornate mosaic of puzzle pieces forming the image of the CMS detector pasted across its front.

“Well I happen to be a physicist, too,” said Traczyk, a member of the CMS collaboration. “So I bet I can think of something to say.”

FameLab, a blend of science fair and talent show, was launched in 2005 by Cheltenham Festivals in partnership with the UK’s National Endowment for Science, Technology and the Arts, to find and nurture scientists and engineers with a knack for communicating science. Competitions are held in 20 countries across Europe, Asia, Africa and North America and so far have attracted more than 3800 researchers.

Traczyk, a Polish postdoctoral student at the University of California, Los Angeles, was one of 20 young researchers who participated in the Swiss semifinal round of FameLab 2013. He won second place with his talk, which used puzzle pieces to explain how scientists at the Large Hadron Collider search for missing bits of the Standard Model of particle physics.

The first-place winner, Divya Ail from the University of Zurich, used humor and props to explain how using Viagra can affect a person’s vision.

“This is a way to foster the interaction between scientists and the public,“ says Antonella Del Rosso, member of the CERN Communication Group and organizer of this year’s Swiss FameLab semifinal. “They are only given three minutes, so it’s a challenge. But they are eager to explain their research and how important it is.”

Contestants for this round of FameLab work at universities or institutions across Switzerland. Participants enchanted and educated their live audience, online spectators and a panel of judges by presenting on issues including how to fight cancer with physics and why birds fly in a V-shaped formation.

“I think it’s important to communicate science to the general public,” says Nazim Hussain, a contestant and University of Oxford physicist from the LHCb experiment at CERN. “People are interested, but they might be intimidated by what they see in the media. It’s easy to dismiss something because it’s complicated.”

Of the 20 contestants, 10 were selected to go on to the Swiss FameLab Finals in Zurich on May 24. Winners from that round will continue on to the FameLab International Festival in Cheltenham in June.