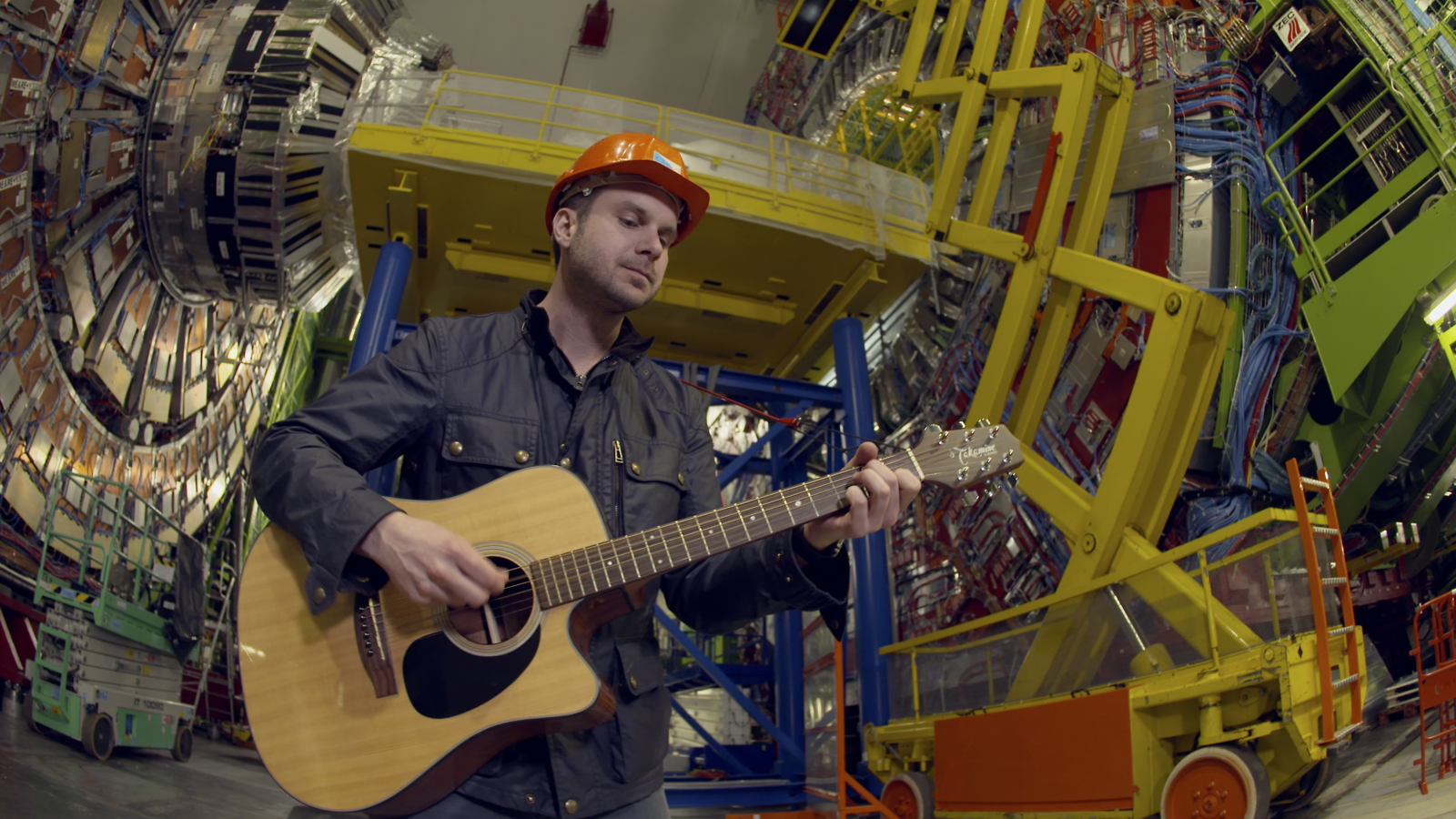 After the musician learned that grad students at CERN had created a parody of his 2004 single “Collide,” he flew to Switzerland to sing it at the LHC.

Singer-songwriter Howie Day was sitting in a coffee shop in Denver one morning while on tour when he saw the Twitter notifications: CERN had shared a parody video of his hit song “Collide,” sung from the perspective of a proton in the Large Hadron Collider.

They spent lunches and coffee breaks workshopping their new version of the lyrics, which were originally about two people falling in love despite their differences. They spent a combined 20 hours in CERN’s editing studio recording the vocals and instrumentation of the track. Then they wandered around the laboratory for a full Saturday, filming at various sites. Charley edited the footage together.

“I was flattered, and it was quite funny, too,” Day says of seeing the video for the first time. “I immediately retweeted it and then sent a direct message inquiring about a visit. I figured it was a long shot, but why not?”

That started a conversation that led to Day planning a visit to CERN and booking time in his studio to re-record the song from the ground up with the new lyrics. “It was about the most fun I've ever had in the studio,” Day says. “We literally laughed all day long. I sent the track off to CERN with the note, ‘Should we make another music video?’”

The answer was yes.

While at CERN, Day spent two days visiting the ATLAS and CMS experiments, the CERN Data Centre and the SM18 magnet-testing facility. He also was given the rare opportunity to travel down into the LHC tunnel. CERN’s video crew tagged along to film him at the various sites.

“Going down into the LHC tunnel was a once-in-a lifetime opportunity, and it felt that way. It was like seeing the northern lights, or playing The Tonight Show, or bringing a new puppy home.”

Day, who says he has always been fascinated by the “why” of things, had been aware of CERN before this project, but he had only a rough idea of what went on there. He says that it wasn’t until he got there that things started to make sense.

“Obviously nothing can prepare you for the sheer scale of the place, but also the people who worked there were amazing,” Day says. “I felt completely overwhelmed and humbled the entire time. It was truly great to be working at the site where humans may make the most important scientific discoveries of our lifetime.”

Heilman, now a postdoctoral researcher at Carleton University, says that he saw the song as a way to reach out to people outside the culture of academia.

“All of us have been steeped in the science for so long that we sort of forget how to speak a language,” he says. “It's always important for academics and researchers to learn different ways to communicate what we’re doing because we’re doing it for people and for society.”

There’s a point in the original song where there’s an emotional build, he says, and Day sings, “I’ve found I’m scared to know, I’m always on your mind.”

The parody uses that part of the song to express the hopes and fears of experimentalists looking for evidence that might not ever appear.

“We're all experimentalists, so we will all spend our careers searching for something,” Heilman says. “The feeling is that [the theory of] supersymmetry, while it's this thing that everybody's been so excited about for a long time, really doesn’t seem that likely to a lot of us anymore because we’re eliminating a lot of the phase space. It's sort of like this white whale hunt. And so our lyrics, ‘Can SUSY still be found?’ is this emotional cry to the physics.”

Charley says she hopes that, through the video, they’re able to “reach and touch people with the science who we normally can't talk to.”

“I think you can appreciate something without fully understanding it,” she says. “As someone who is a professional science communicator, that's always the line I'm walking: trying to find ways that people can appreciate and understand and value something without needing to get a PhD. You can't devote your life to everything, but you can still have an appreciation for things in the world outside your own specific field.”