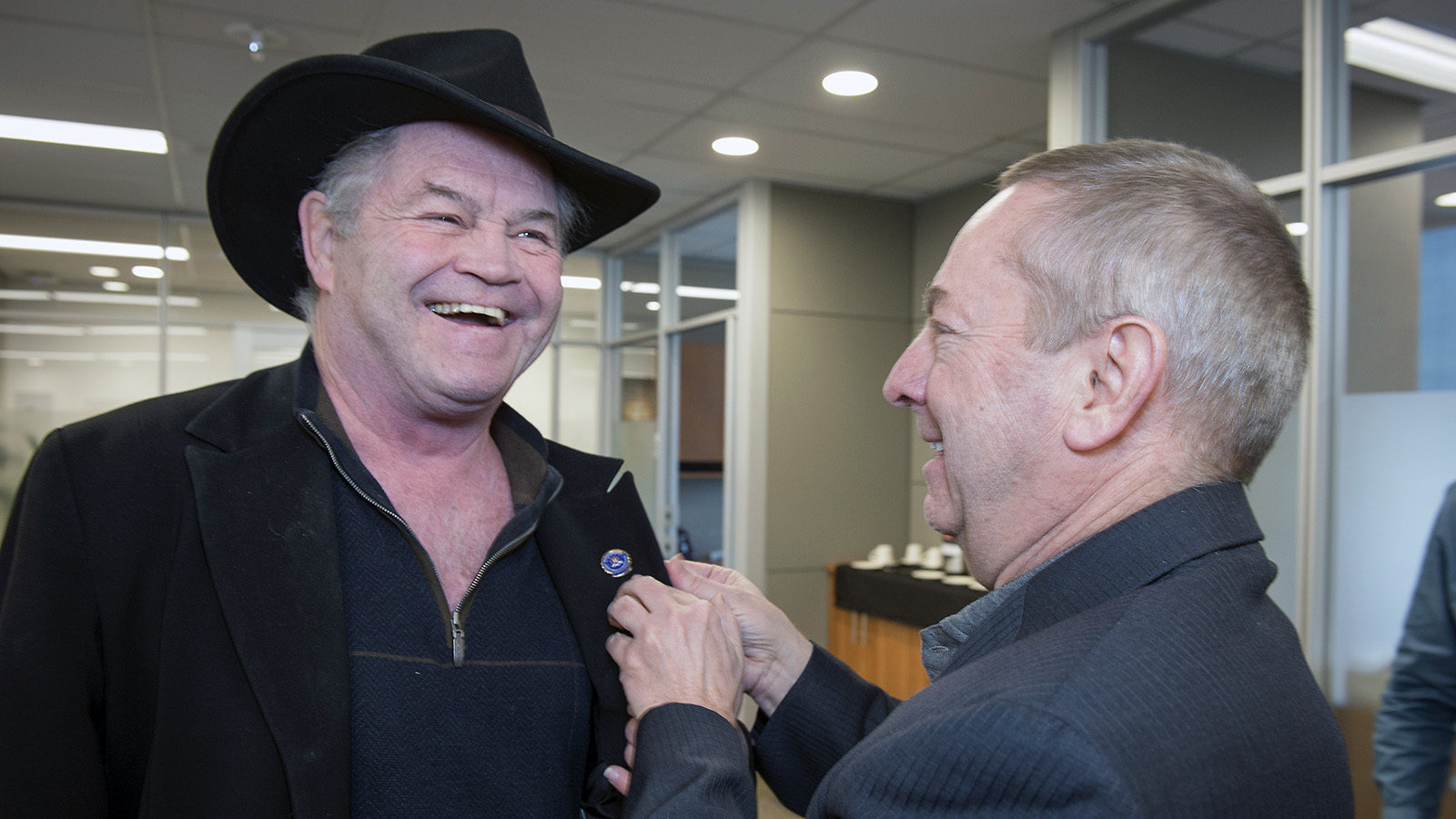 Micky Dolenz, best known as a vocalist and drummer in 1960s pop band The Monkees, turns out to be one of Fermi National Accelerator Laboratory’s original fans.

“Dear Ms. Higgins,” began the email to an employee of Fermi National Accelerator Laboratory. “My name is Micky Dolenz. I am in the entertainment business and probably best known for starring in a ’60s TV show called The Monkees. I have also been a big fan of particle physics for many decades.”

The message, which laboratory archivist Valerie Higgins received in November 2016, was legit. And it turns out Dolenz wasn’t kidding about his love of physics. Dolenz visited Fermilab on February 10 and impressed and amazed the scientists he met with his knowledge of (and genuine affection for) the science of quarks, leptons and bosons. Dolenz was, by all accounts, just as excited to meet with Fermilab scientists as they were to meet with him.

“He was so enthusiastic about the lab,” Higgins says. “It was such a treat to see someone of his stature and popularity be so interested and knowledgeable about our kind of physics.”

Previously unbeknownst to most of the lab’s employees, Dolenz’s association with Fermilab actually stretches back more than 40 years. The last time Dolenz visited Fermilab, the year was 1970. The Monkees TV show had wound down, and Dolenz, then 25, was starring in a play called Remains to Be Seen at the Pheasant Run Playhouse in nearby St. Charles, Illinois. Fermilab wasn’t even called Fermilab yet—it still went by the name National Accelerator Laboratory.

Dolenz says he remembers his first visit well. At the time, the lab consisted of a few trailers and bungalows—Fermilab’s now-iconic high-rise building, Wilson Hall, would not be completed until 1973. Dolenz had lunch with several of the scientists then toured the construction site for the Main Ring, the future home of Fermilab’s first superconducting accelerator, the Tevatron.

Dolenz captured some of his visit on 16mm film, footage he says he still has in storage. Dolenz called his previous tour of Fermilab “wonderful” and “a dream come true.”

Dolenz credits a junior high science teacher with sparking his interest in physics. He spent much of his childhood in Los Angeles building oscilloscopes and transceivers for ham radios and other gadgets. “I was always curious, always building stuff,” he says. “While the other kids were reading Superman comics, I was reading Science News. I loved it all, particularly particle physics and quantum physics.”

Dolenz was in training to be an architect, but at age 20, the Monkees audition offered him the opportunity to catapult to worldwide fame as a TV star and musician instead. (“I’m not an idiot,” he says of accepting the role.) Still, he maintained his interest in science—his first email address, created in the 1990s, was “Higgs137,” referencing both the then-undiscovered Higgs boson and the measure of the fine structure constant. 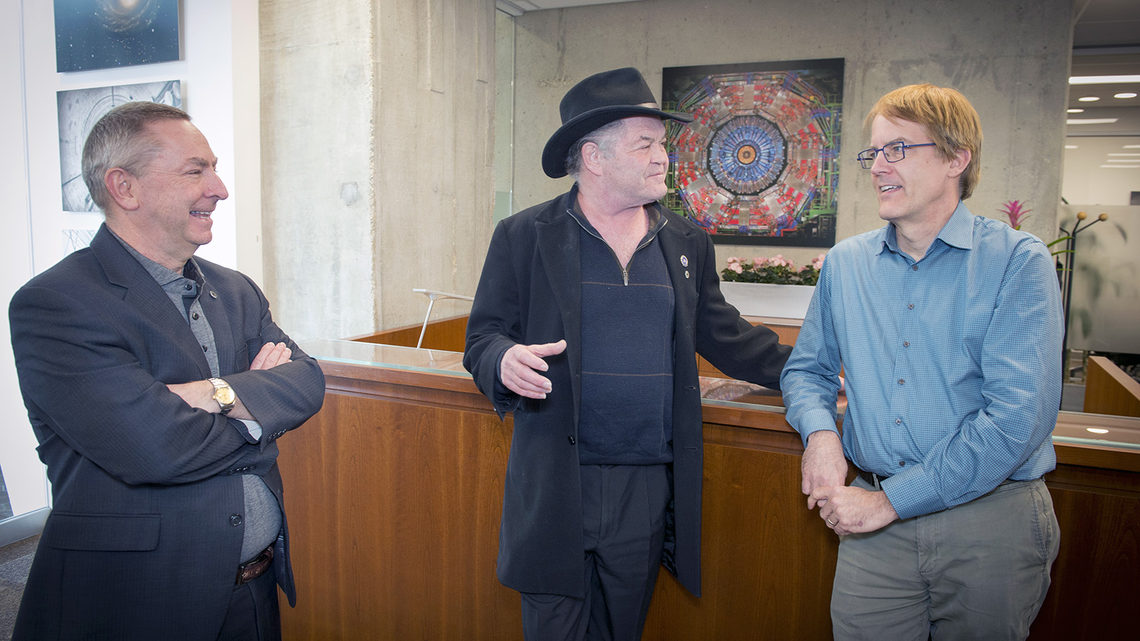 That interest in science has remained strong, Fermilab physicists noted during the February tour. Dolenz toured the underground cavern that houses detectors for the MINOS, NOvA and MINERvA neutrino experiments, the Muon g-2 experiment hall (where scientists played the theme from The Monkees when he walked in), and the DZero detector in the long-since completed Main Ring. He also spent time in three control rooms.

In every location, he impressed the scientists he met with his understanding of physics and his full-on joy at seeing science in action.

“Who knew he is a life-long physics aficionado?” says scientist Adam Lyon, who gave Dolenz his Tevatron tour. “I had a great time talking with him.”

Dolenz says he sees plenty of connection between his twin interests of physics and music, noting that Einstein played the violin; Richard Feynman played bongos; and Queen guitarist Brian May is an astrophysicist on several experimental collaborations.

“According to theory the universe is constantly vibrating, down to even the smallest particles,” Dolenz says. “We talked a lot about vibrations in the ’60s, and Eastern philosophy has been talking about the vibration of the universe for thousands of years. Music is vibration and meter and frequency. There’s a lot of overlap.”

Dolenz enjoyed his time at Fermilab so much that he hung out at the lab’s on-site pub until late in the evening, chatting with scientists. And according to Higgins, who spent the most time with him, he’s hoping to return very soon.

“He’s still looking for the footage he shot in 1970, and plans to donate that to the archive,” she says. “But I told him he’s welcome here anytime.” 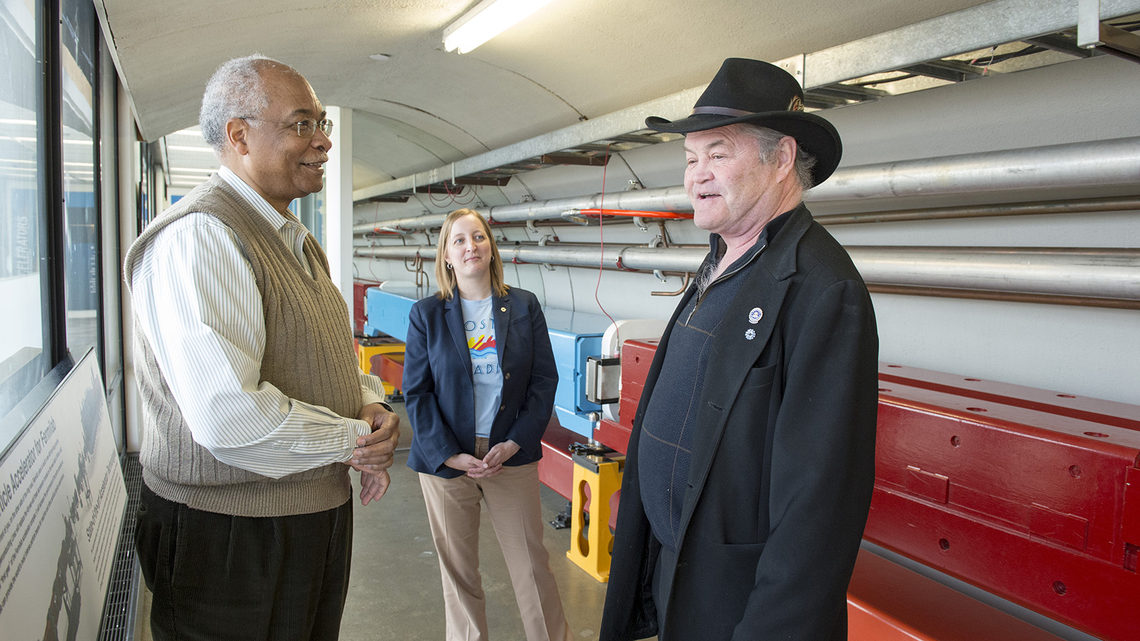 Photo by Reidar Hahn, Fermilab
Follow
Use your browser’s print dialog box to create a pdf.
Popular on symmetry