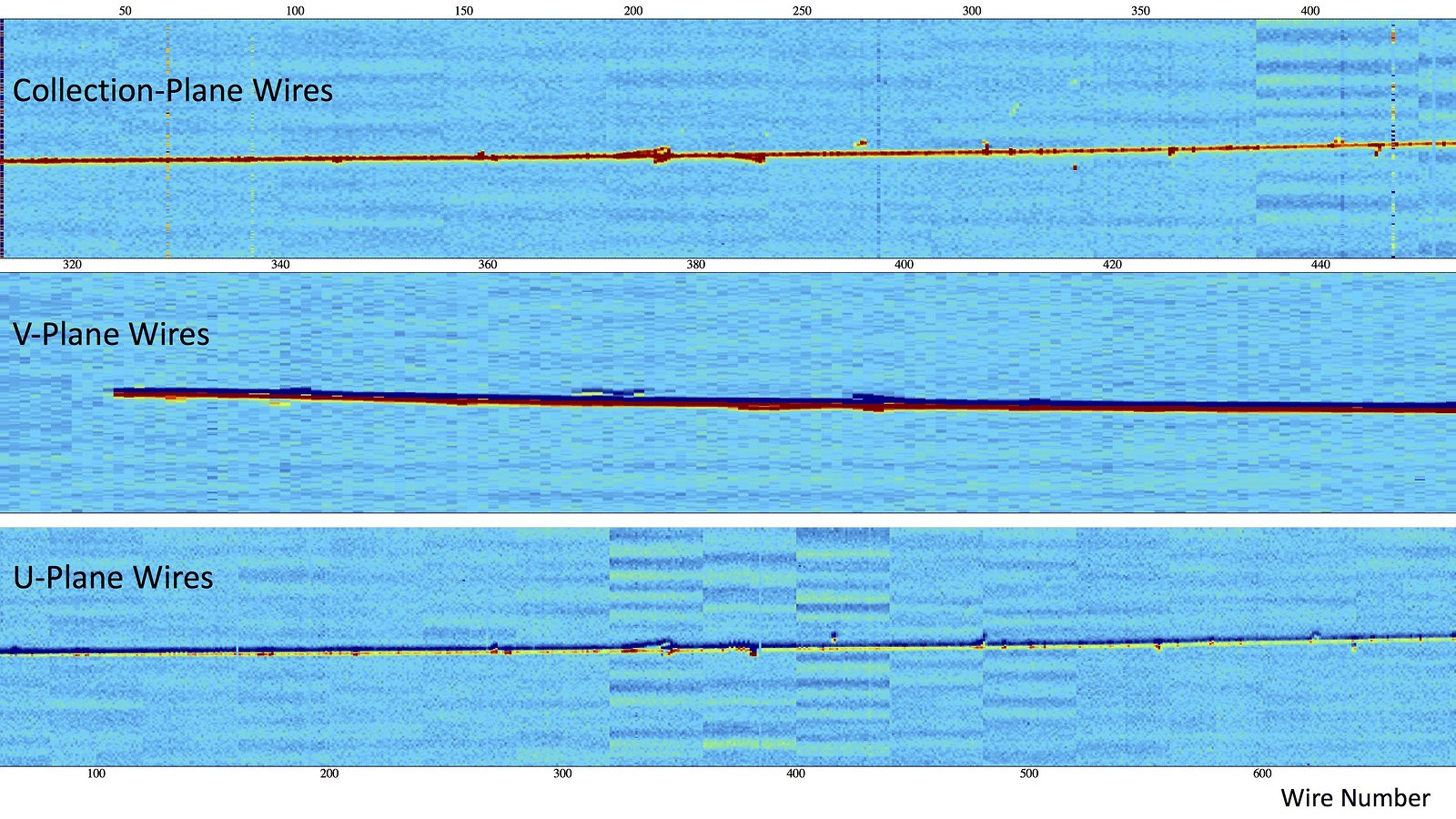 The largest liquid-argon neutrino detector in the world has just recorded its first particle tracks, signaling the start of a new chapter in the story of the international Deep Underground Neutrino Experiment.

DUNE's scientific mission is dedicated to unlocking the mysteries of neutrinos, the most abundant matter particles in the universe. Scientists on the DUNE collaboration think that neutrinos may help answer one of the most pressing questions in physics: why we live in a universe dominated by matter. In other words, why we are here at all.

The enormous ProtoDUNE detector—the size of a three-story house and the shape of a gigantic cube—was built at CERN, the European laboratory for particle physics, as the first of two prototypes for what will be a much, much larger detector for the DUNE project, hosted by the US Department of Energy’s Fermi National Accelerator Laboratory in the United States. When the first DUNE detector modules record data in 2026, they will each be 20 times larger than these prototypes. There will be four modules in total.

It is the first time CERN is investing in infrastructure and detector development for a particle physics project in the United States.

The first ProtoDUNE detector took two years to build and eight weeks to fill with 800 tons of liquid argon, which needs to be kept at temperatures below minus 300 degrees Fahrenheit. The detector records traces of particles in that argon both from cosmic rays and a beam created at CERN’s accelerator complex. Now that the first tracks have been seen, scientists will operate the detector over the next several months to test the technology in depth.

“Only two years ago we completed the new building at CERN to house two large-scale prototype detectors that form the building blocks for DUNE,” says Marzio Nessi, head of the Neutrino Platform at CERN. “Now we have the first detector taking beautiful data, and the second detector, which uses a different approach to liquid-argon technology, will be online in a few months.”

The technology of the first ProtoDUNE detector will be the same to be used for the first of the DUNE detector modules in the United States, which will be built a mile underground at the Sanford Underground Research Facility in South Dakota. More than 1000 scientists and engineers from 32 countries spanning five continents—Africa, Asia, Europe, North America and South America—are working on the development, design and construction of the DUNE detectors. The groundbreaking ceremony for the caverns that will house the experiment was held in July 2017.

“Seeing the first particle tracks is a major success for the entire DUNE collaboration,” says DUNE co-spokesperson Stefan Soldner-Rembold of the University of Manchester, UK. “DUNE is the largest collaboration of scientists working on neutrino research in the world, with the intention of creating a cutting-edge experiment that could change the way we see the universe.”

When neutrinos enter the detectors and smash into the argon nuclei, they produce charged particles. Those particles leave ionization traces in the liquid, which can be seen by sophisticated tracking systems able to create three-dimensional pictures of otherwise invisible subatomic processes. (Watch an animation of how the DUNE and ProtoDUNE detectors work, along with other videos about DUNE.)

“CERN is proud of the success of the Neutrino Platform and enthusiastic about being a partner in DUNE, together with institutions and universities from its member states and beyond," says Fabiola Gianotti, director-general of CERN. “These first results from ProtoDUNE are a nice example of what can be achieved when laboratories across the world collaborate. Research with DUNE is complementary to research carried out by the LHC and other experiments at CERN; together they hold great potential to answer some of the outstanding questions in particle physics today.”

DUNE will not only study neutrinos, but their antimatter counterparts as well. Scientists will look for differences in behavior between neutrinos and antineutrinos, which could give us clues as to why the visible universe is dominated by matter. DUNE will also watch for neutrinos produced when a star explodes, which could reveal the formation of neutron stars and black holes, and will investigate whether protons live forever or eventually decay. Observing proton decay would bring us closer to fulfilling Einstein’s dream of a grand unified theory.

“DUNE is the future of neutrino research,” says Fermilab Director Nigel Lockyer. “Fermilab is excited to host an international experiment with such vast potential for new discoveries and to continue our long partnership with CERN, on both the DUNE project and the Large Hadron Collider.”

Editor's note: a version of this article was originally published by Fermilab.