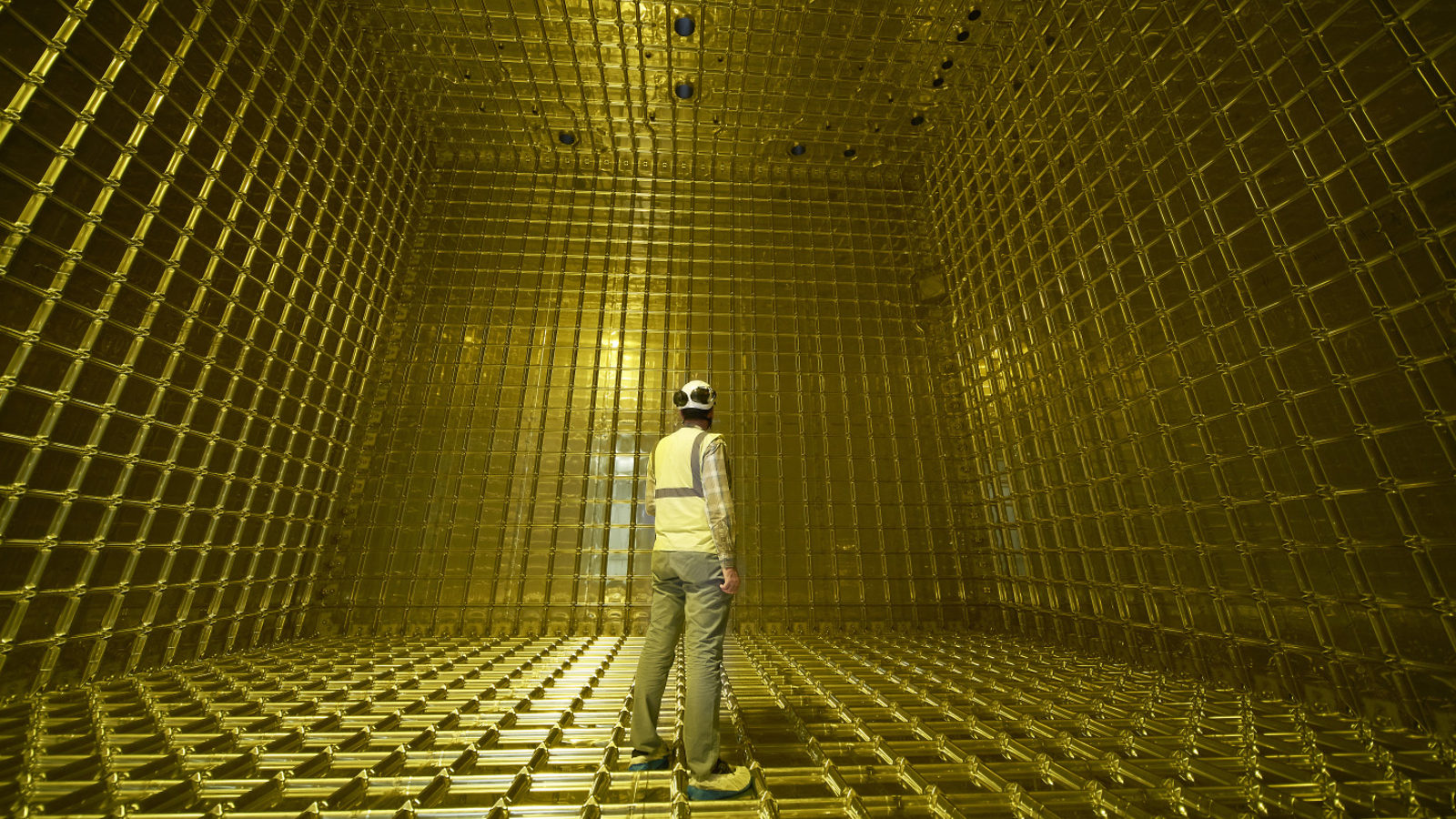 To investigate some of the biggest mysteries in the universe, particle physicists design and build high-tech detectors. On top of the incredible science they make possible, these experiments are often staggeringly beautiful. Views of the process of putting them together look like they could come straight out of a sci-fi film or from an alien planet.

This is true of the ProtoDUNE detectors, which often appear in photographs as giant gold-colored cubes. These test beds are how scientists assess the technologies that will go into the Deep Underground Neutrino Experiment, the biggest international science project in the United States.

Hosted by the US Department of Energy's Fermi National Accelerator Laboratory, DUNE will send particles called neutrinos 800 miles (1300 kilometers) through the earth from Illinois to South Dakota. There, about a mile (1.5 kilometers) underground, the largest liquid-argon neutrino detector ever built will analyze how those neutrinos behave. Researchers will use the data to investigate some of the biggest unsolved mysteries in particle physics, including why matter exists and what role neutrinos played in the universe’s evolution.

DUNE is an international endeavor with 1100 scientists and engineers from more than 30 countries. DUNE is supported by international funding agencies, including the DOE Office of Science. The prototype detectors for DUNE are under construction at the neutrino platform at CERN, the European Center for Nuclear Physics and home of another amazing science machine, the Large Hadron Collider.

The two ProtoDUNE detectors will help finalize the two different technologies that will be used for the four modules that will comprise DUNE’s far detector and will be filled with 70,000 tons of liquid argon.

Take a look at the construction and evolution of the two prototypes in these 20 photographs—and keep in mind that each of the final DUNE detector modules in South Dakota will be 20 times bigger. 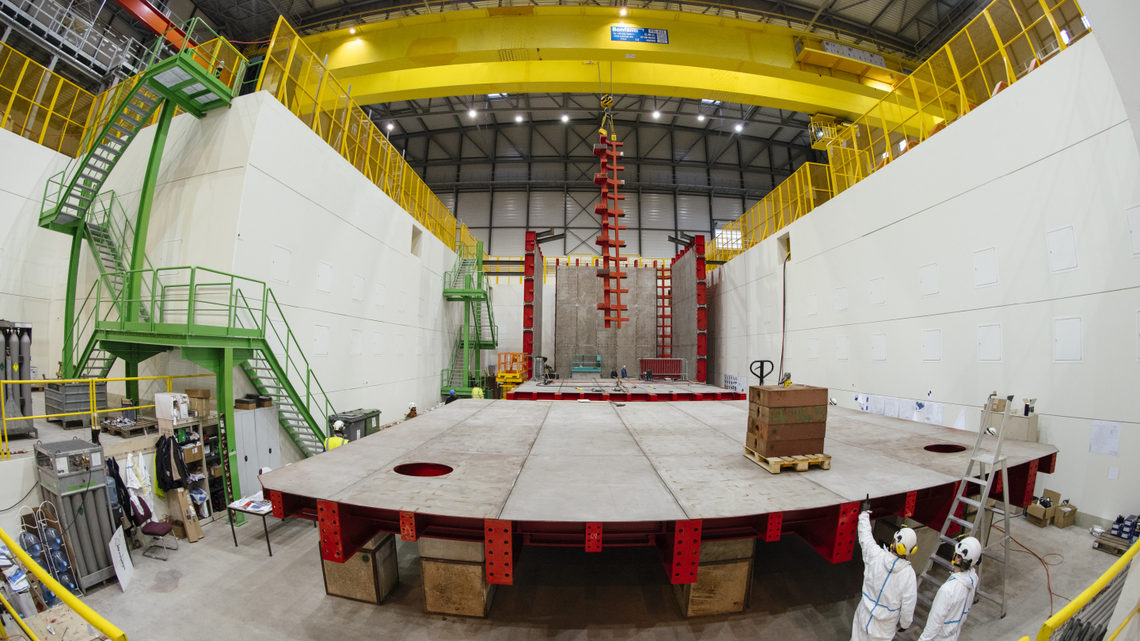 The first step in constructing the mammoth, cube-shaped ProtoDUNE detectors was to weld together portions of the steel cages, the red objects in this photo. 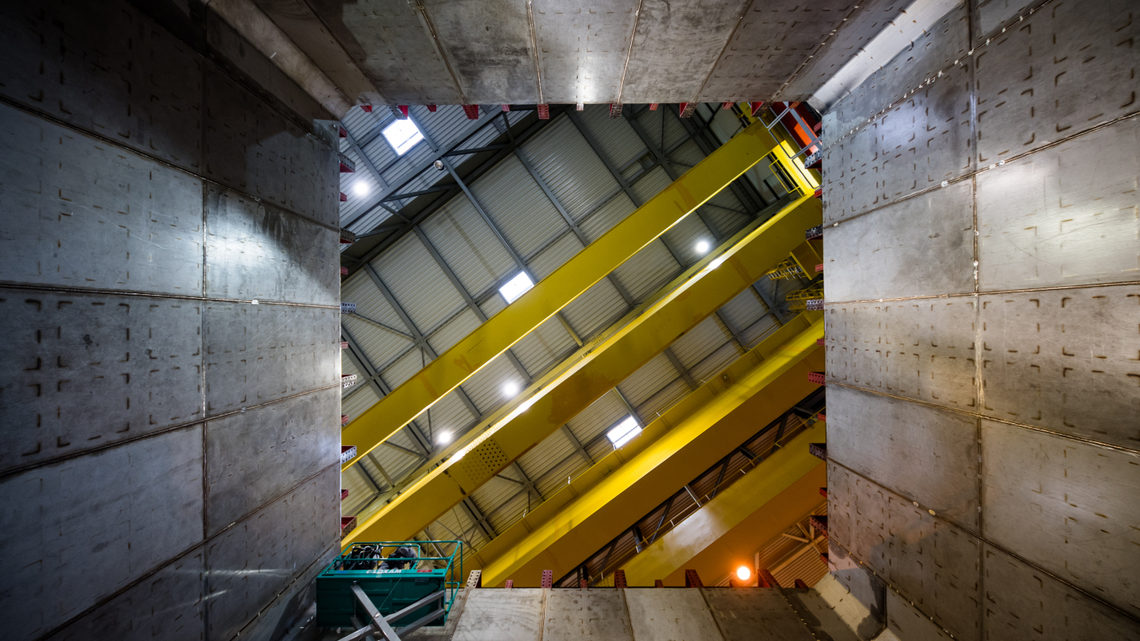 The ProtoDUNE detectors are roughly 11 meters tall and wide. This view looks up toward the crane on the ceiling, with the four walls erected. 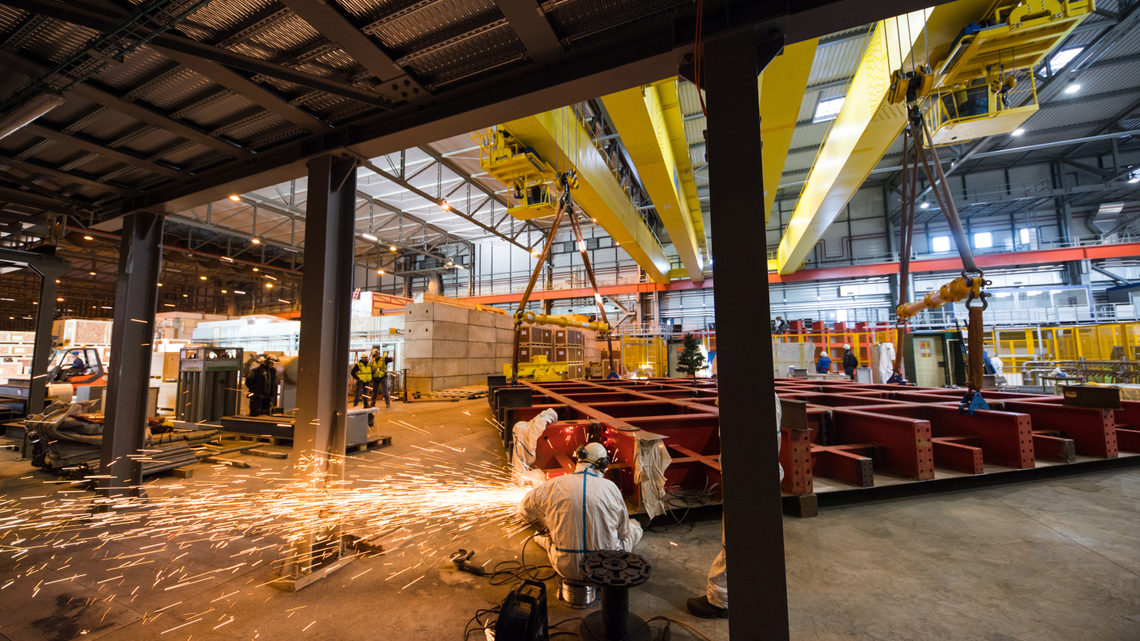 Welders assemble parts of the steel cages for ProtoDUNE. This outer structure provides the necessary support for the interior membrane (or cryostat) that holds the liquid argon. 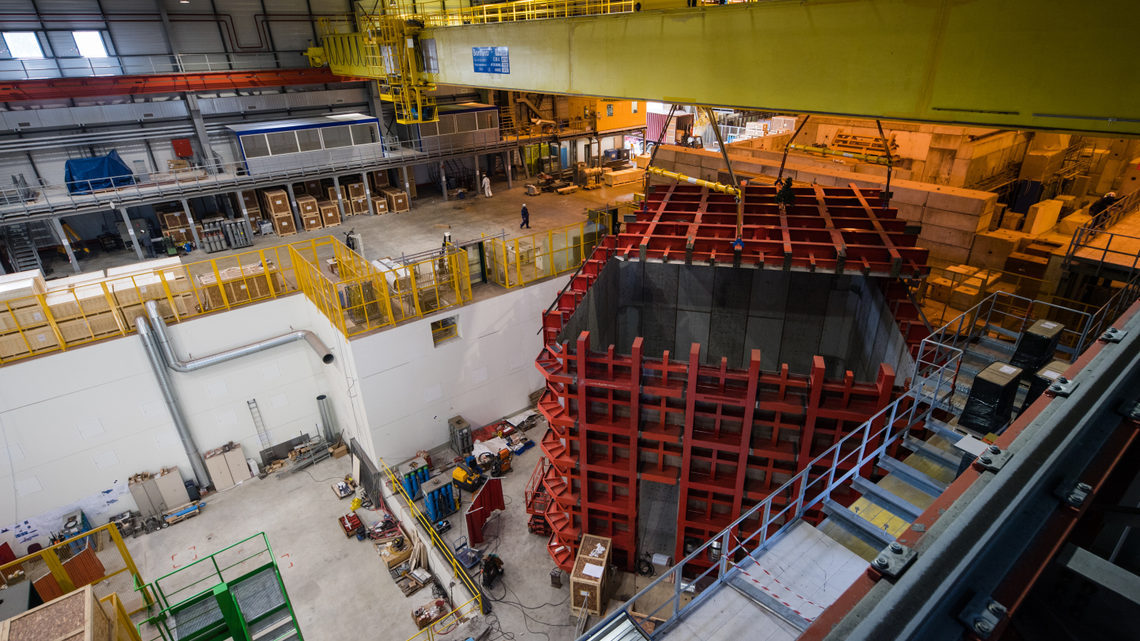 The steel cage for one of the two ProtoDUNE detectors is outfitted with a steel top, hoisted into position by a crane. 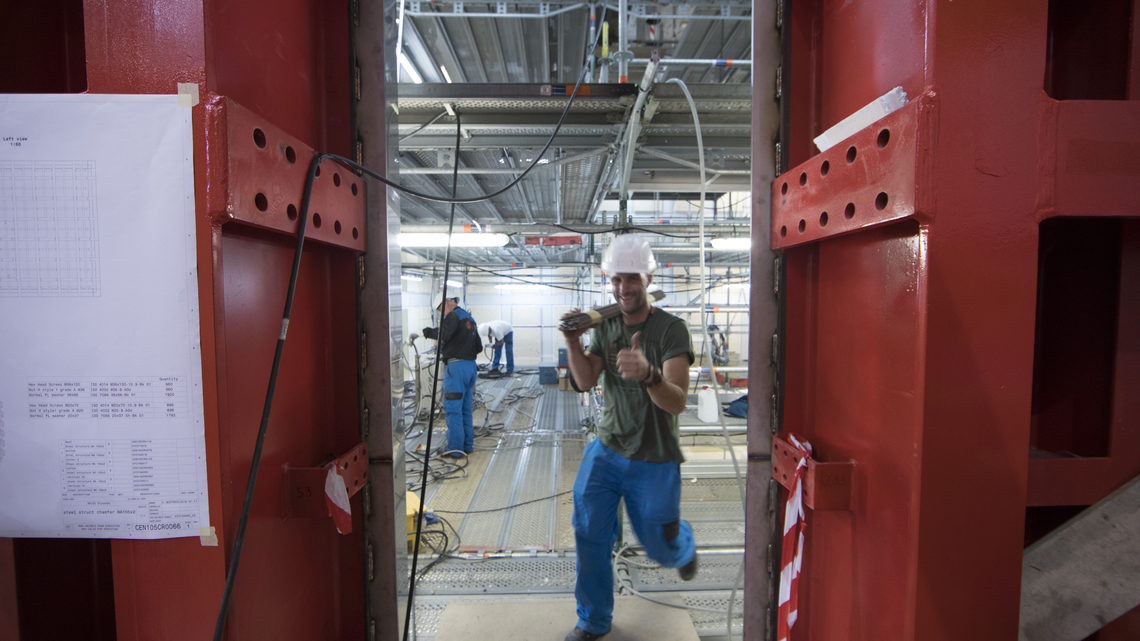 A narrow passage in one of the walls, the temporary construction opening, was the only entrance and exit for workers, materials and technological components. 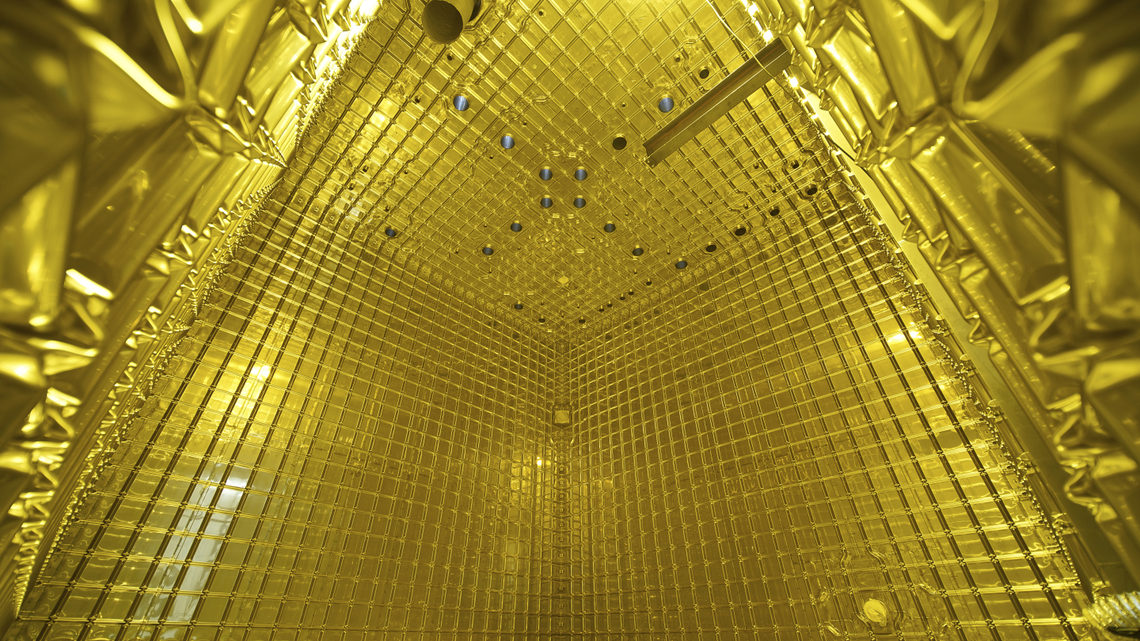 Inside the steel structure, technicians installed the vessel that will hold the liquid argon. It is made of membranes with special folds that allow them to expand and contract, dealing with the temperature changes of the liquid argon. The liquid is cooled to around minus 300 degrees Fahrenheit (minus 186 degrees Celsius). 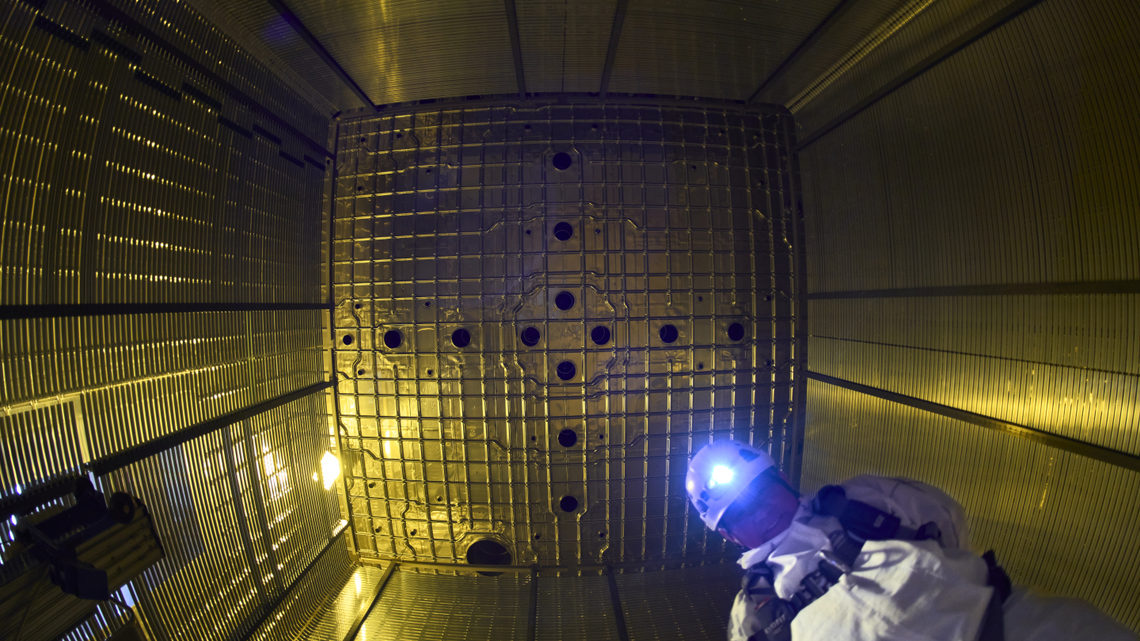 While many of the interior photos of the ProtoDUNE detectors appear gold, it’s actually a trick of the light. To protect certain properties of the photon detection system, technicians use yellow light, which reflects off of the stainless-steel surfaces. “It will be golden physics, metaphorically, but we aren’t using gold,” says Christos Touramanis, ProtoDUNE co-leader and professor at the University of Liverpool in the UK. 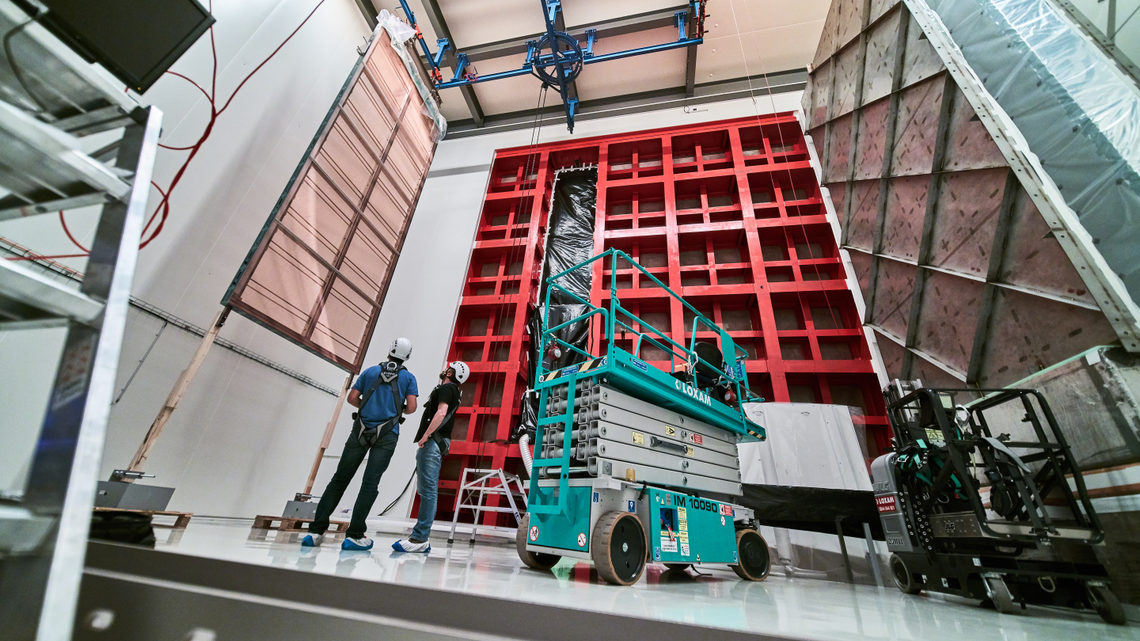 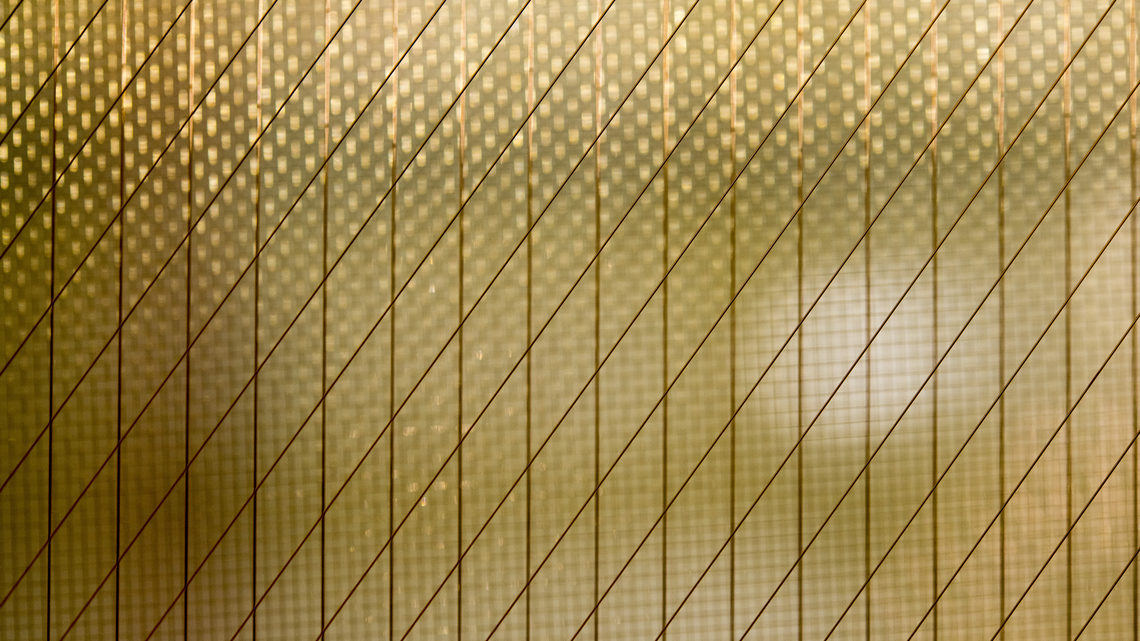 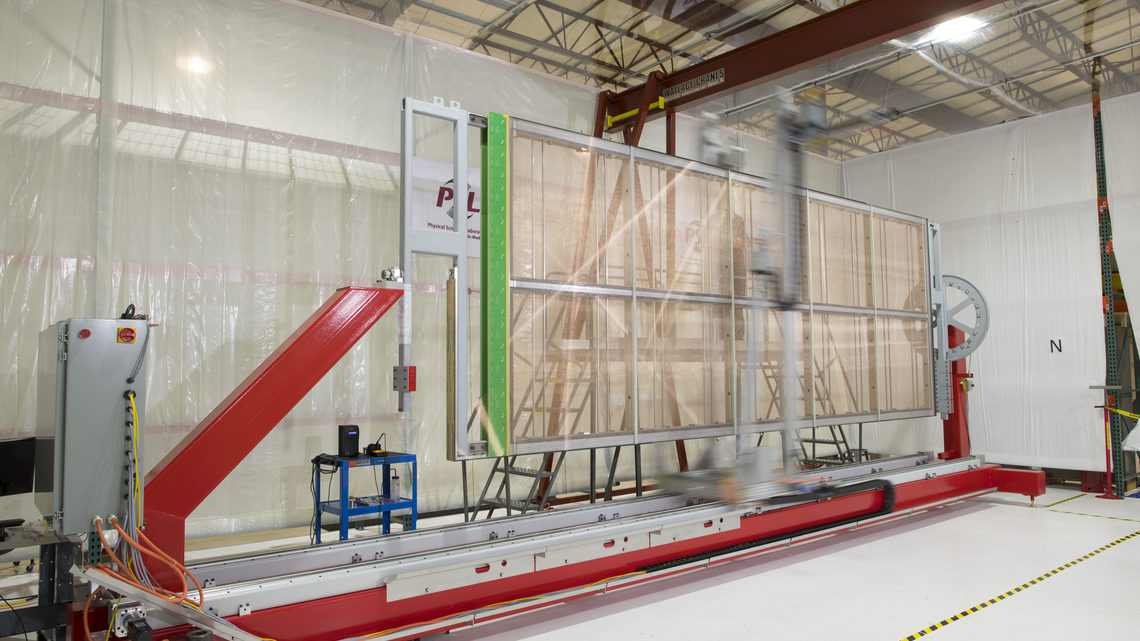 The APAs were carefully constructed by robotic winding machines at two different locations. One team worked at STFC’s Daresbury Laboratory in the UK, while another team produced panels at the Physical Sciences Laboratory at the University of Wisconsin-Madison (pictured). 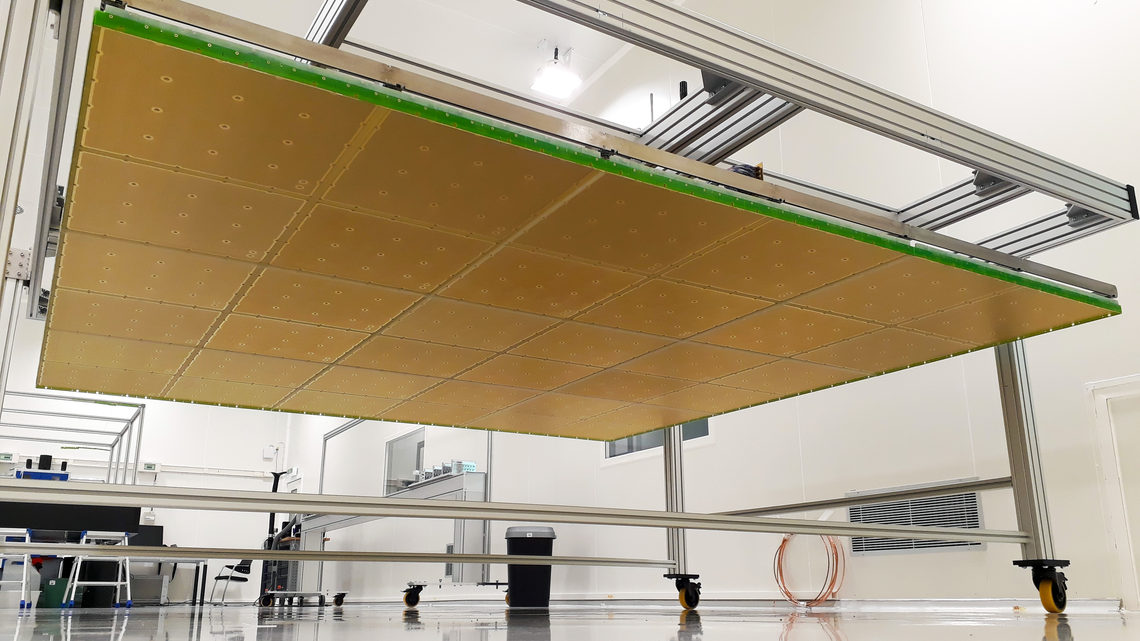 The dual-phase ProtoDUNE is testing a different electronic component for recording particle tracks: the charge-readout plane. The CRP amplifies electrons from the liquid argon into a layer of gaseous argon, creating a strong signal. 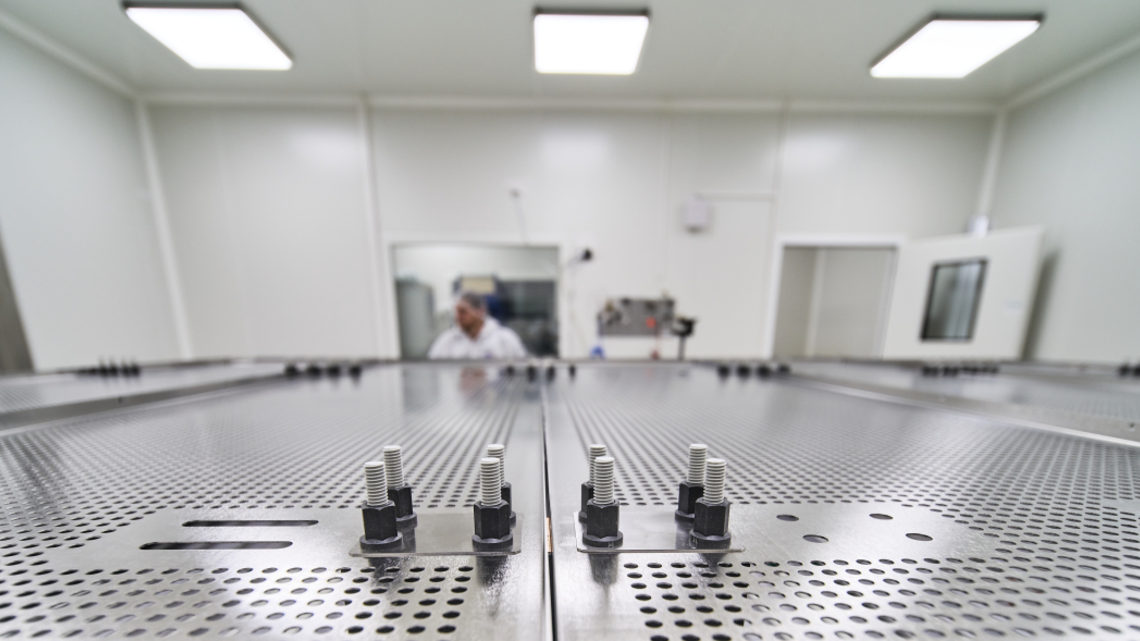 Both the single-phase (pictured) and dual-phase detectors use a device called a field cage, though they vary in design. Field cages use electrical current to attract particles from an interaction toward the detector components over what is called a “drift” region. 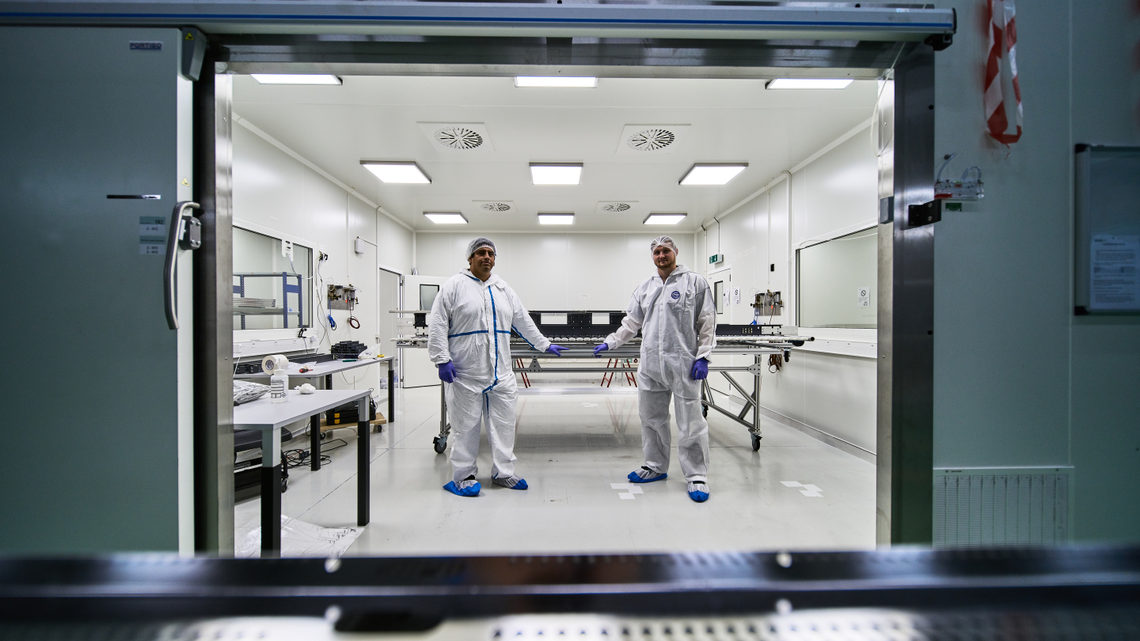 Researchers constructed the single-phase detector’s field cage in a cleanroom at CERN. 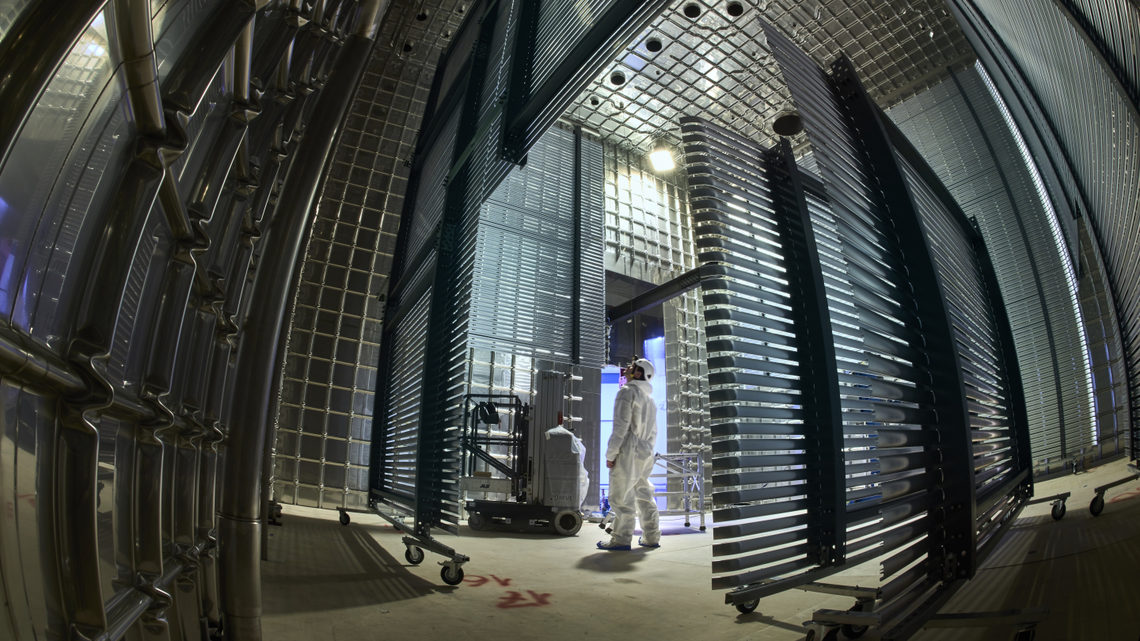 The field cage for the dual-phase ProtoDUNE is made of panels that resemble window blinds. 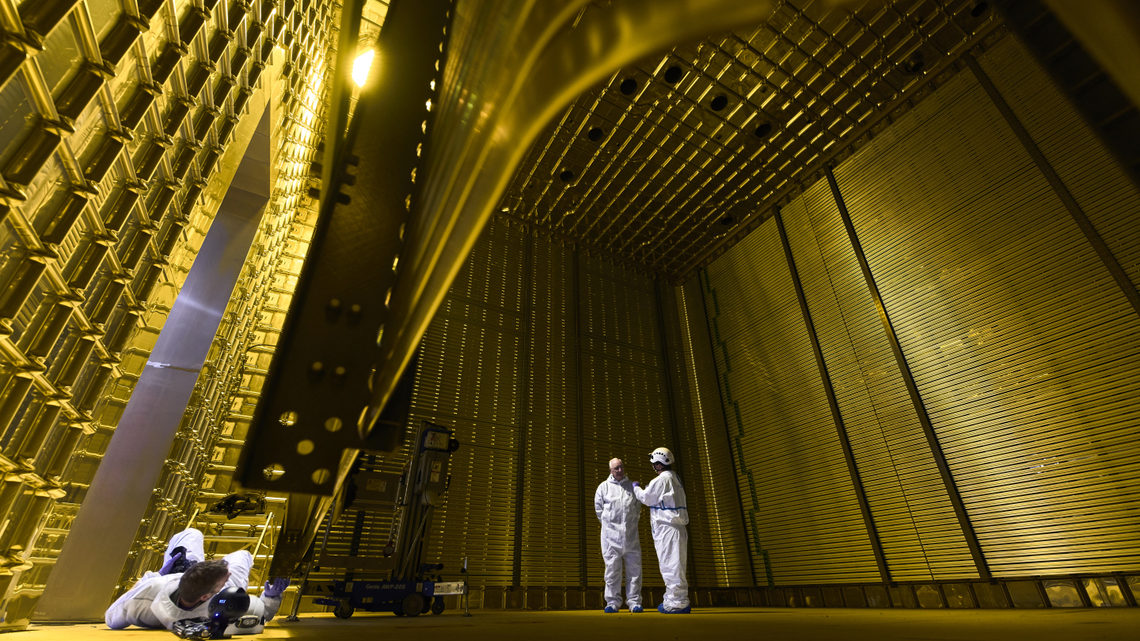 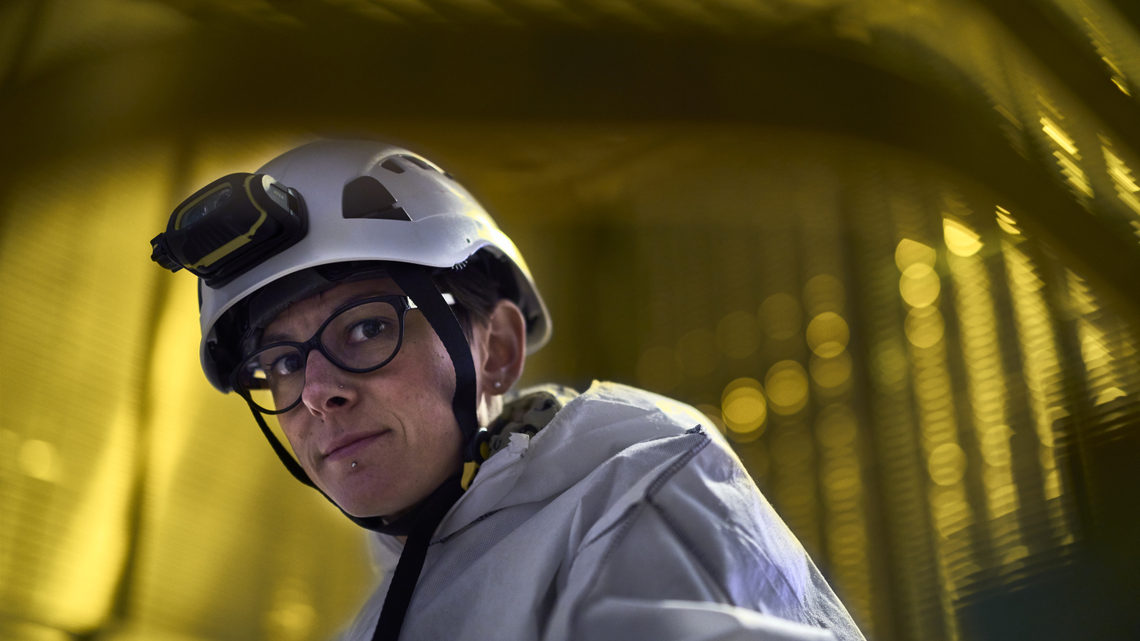 Hundreds of people from institutions around the world are contributing to the design, assembly and operation of the ProtoDUNE detectors at CERN. 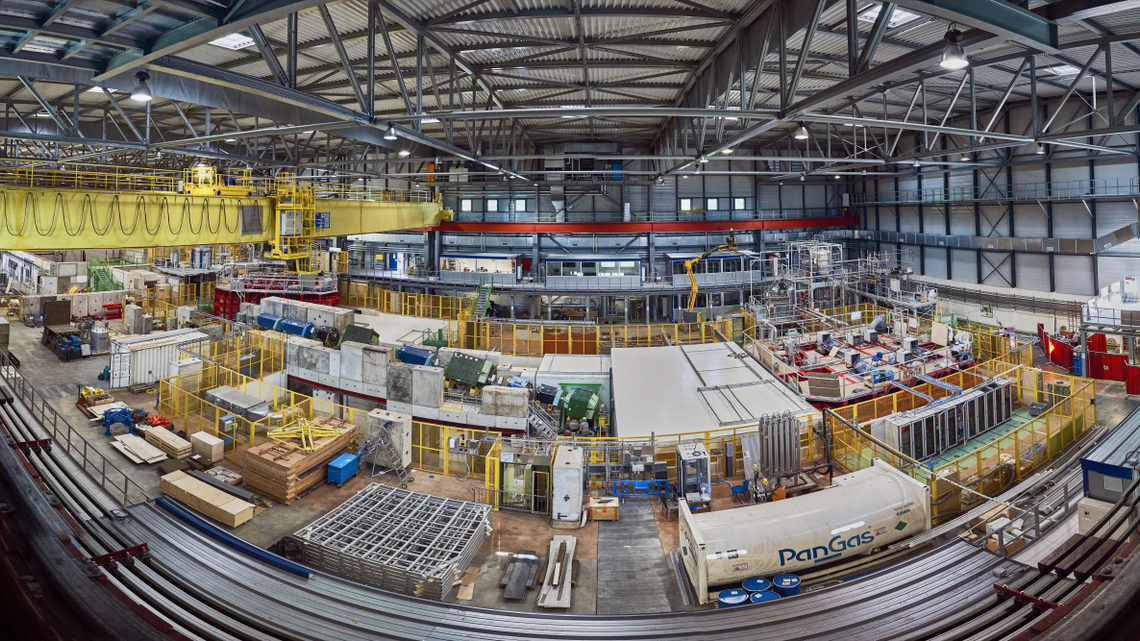 The two detectors require certain infrastructure, such as power, cryogenics for cooling the liquid argon, and electronics to measure the particle tracks. These behemoths are the culmination of years of design, engineering, construction and commissioning. "Getting the ProtoDUNE detectors to this phase has been an impressive accomplishment of team work,” says Fermilab’s Gina Rameika, the ProtoDUNE construction coordinator. “We are looking forward to the next phase of operations.” 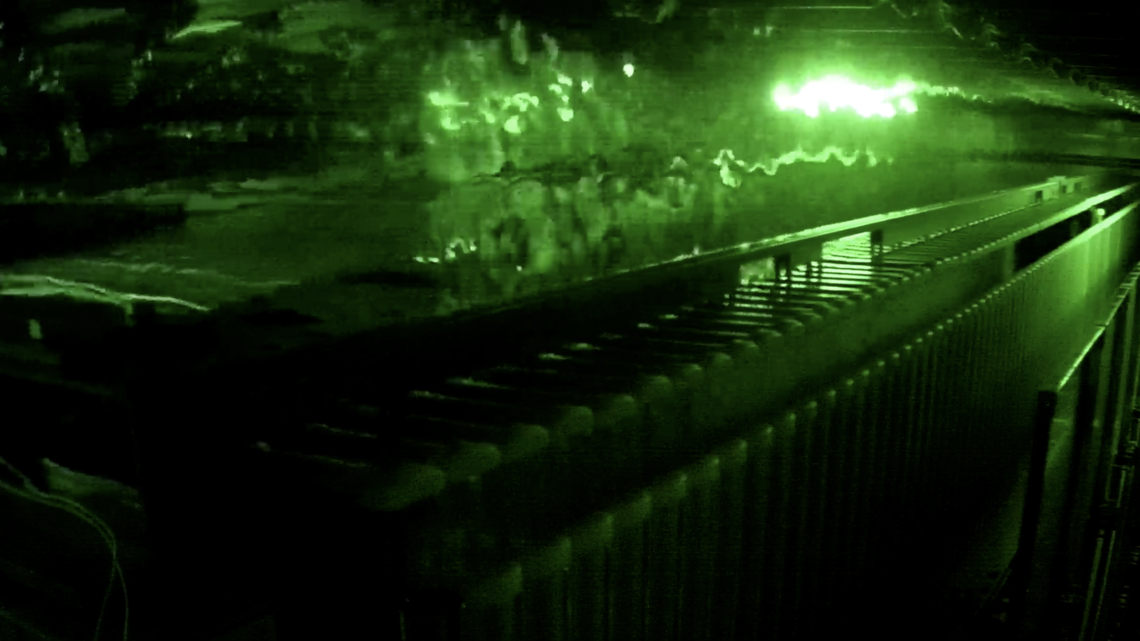 Researchers succcessfully filled the single-phase detector with cold, clear liquid argon, an element that makes up about one percent of the air we breathe and is an excellent detection medium for particles like neutrinos. Cameras inside the detector provided live streams of footage as the detector was filled. 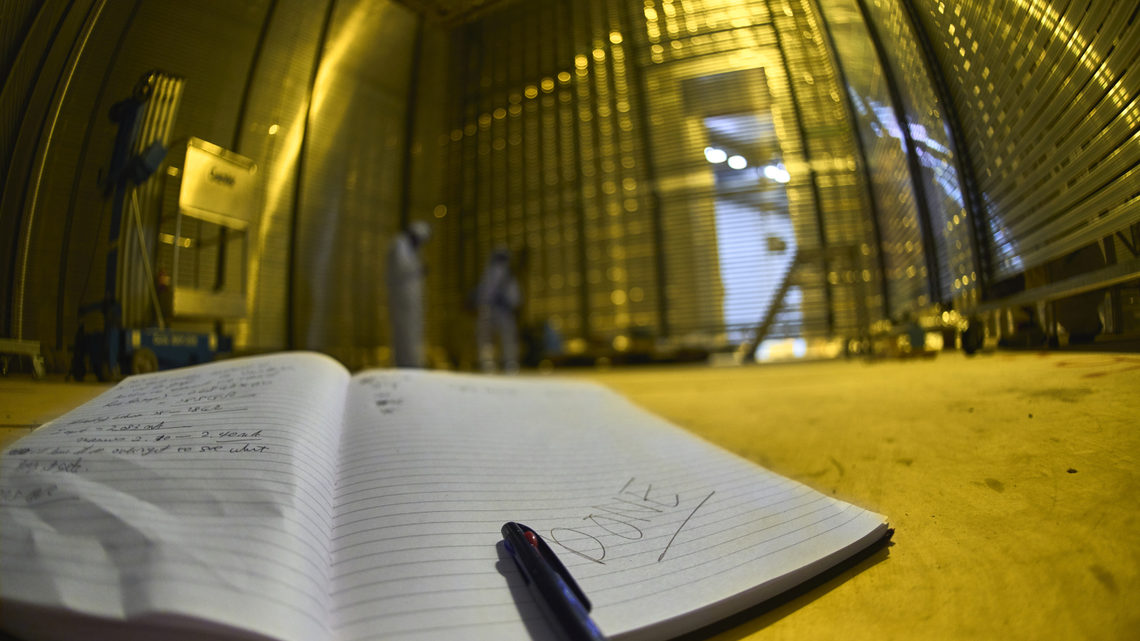 Work continues for the dual-phase detector. The field cage has been installed and other components, such as the electronics, will find their place in the detector this autumn. 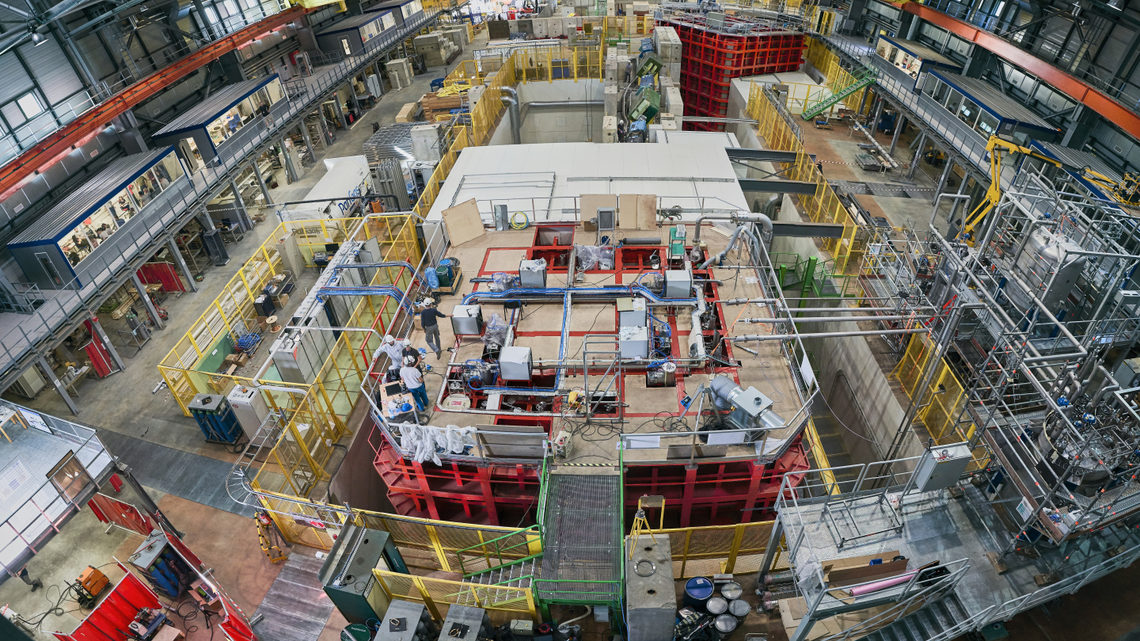 The two ProtoDUNE test beds at CERN are proper particle detectors: They will record particle tracks coming from cosmic rays and from a proton accelerator beam.

Photo by CERN
Follow
Use your browser’s print dialog box to create a pdf.
Popular on symmetry