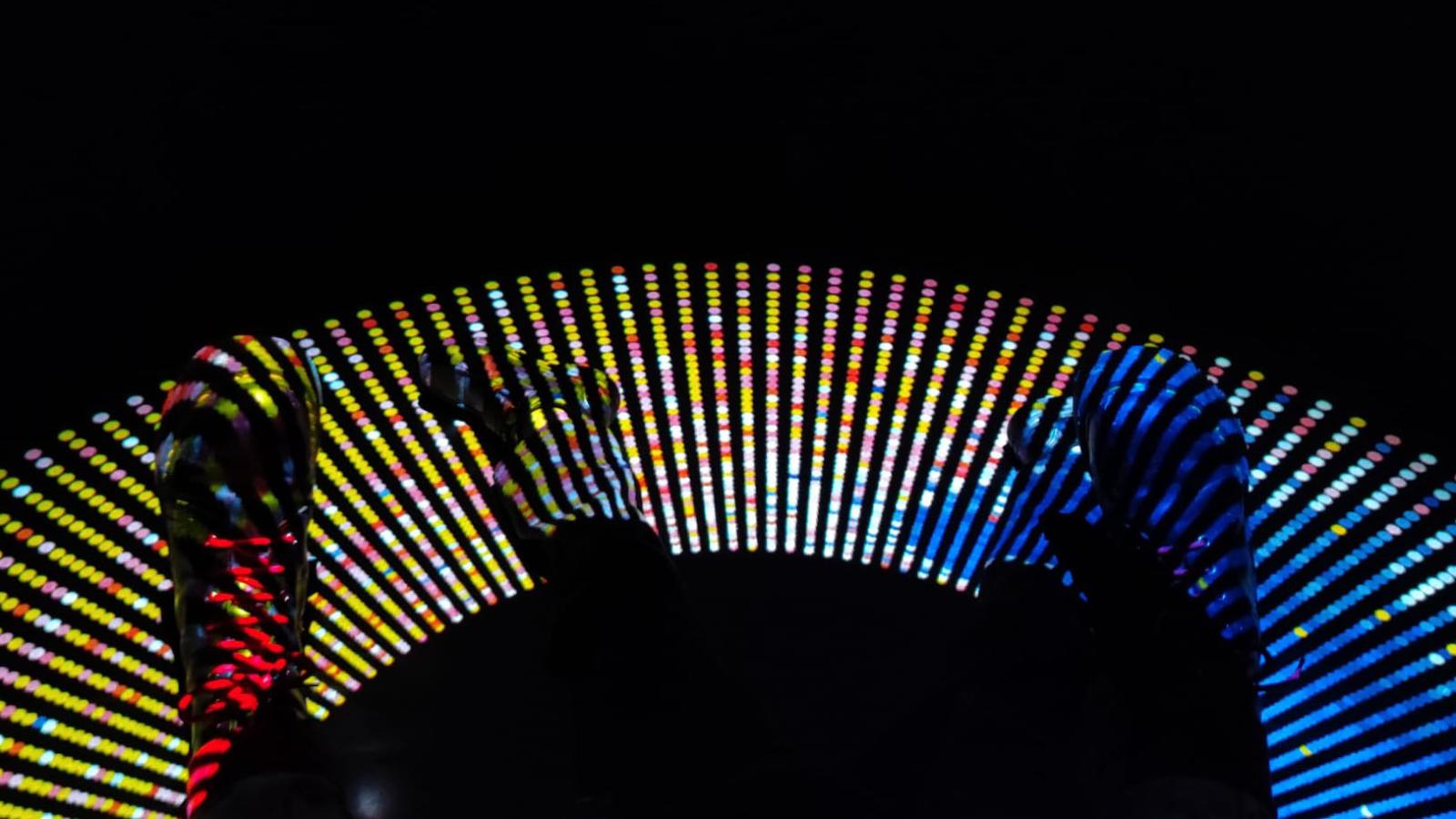 During his postdoc, particle physicist Teppei Katori enjoyed spending his free time at the pub, discussing physics with his colleagues. But he also loved dancing and listening to music in the nearby creative districts of Chicago.

He spent his days studying neutrinos at the US Department of Energy’s Fermi National Accelerator Laboratory in Batavia, Illinois. In the evenings, he ventured to the city, seeking the company of artists and musicians.

“I met lots of people the same age,” he says. “Chicago has art districts, you know, lots of galleries. And I started hanging around these people, and somehow, I got along with them very well.”

Spending time with artists gave Katori new perspectives, and spending time with Katori brought the artists new perspectives as well. This blending of knowledge and culture helped Katori and his friends create new ways of connecting with particle physics—most recently, an art installation that translates messages from the universe to vibrations, light and sound.

Visitors to Science Gallery London can experience that exhibit, called “Particle Shrine,” until Saturday, 21 January. “Particle Shrine” is part of “Testing Ground,” an exhibition that, according to the gallery, “reveals how conversations between artists, researchers, and wider communities can change the ways we think about and engage with the world around us.” 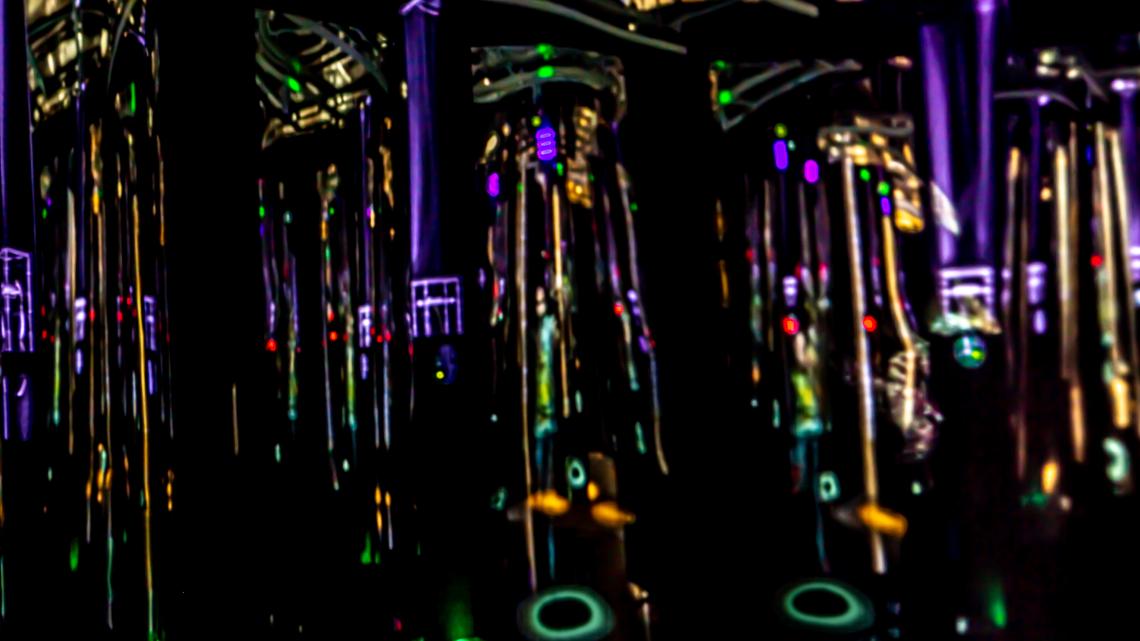 The "Particle Shrine" exhibit will be on display at Science Gallery London until Saturday, January 21. 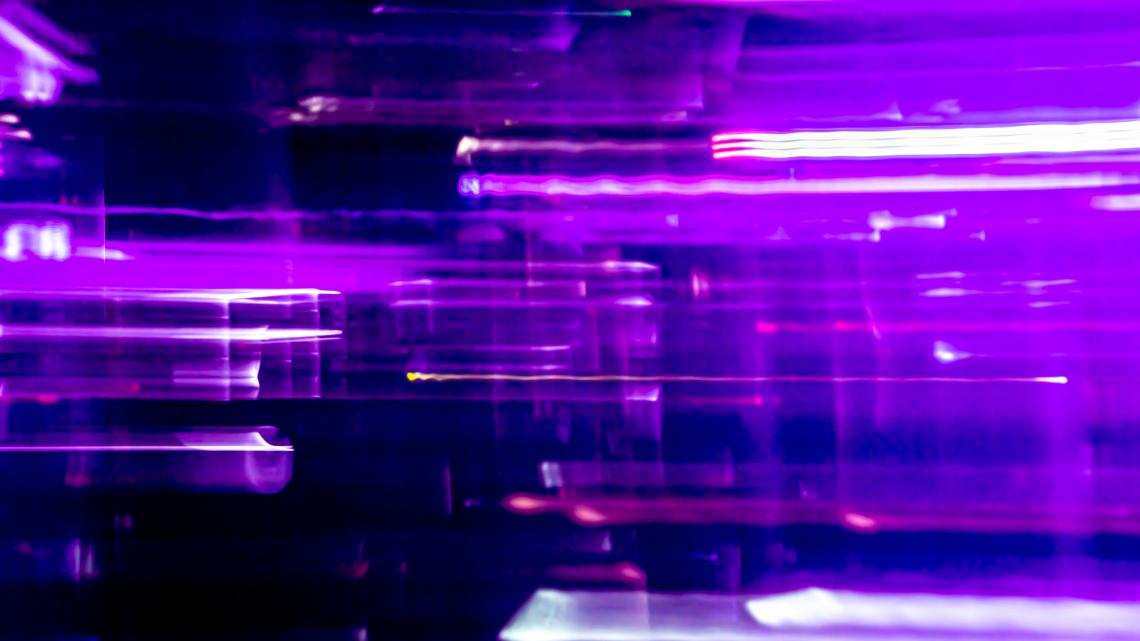 In the exhibit, lights, sounds and vibrating mirrors represent the movements of subatomic particles. 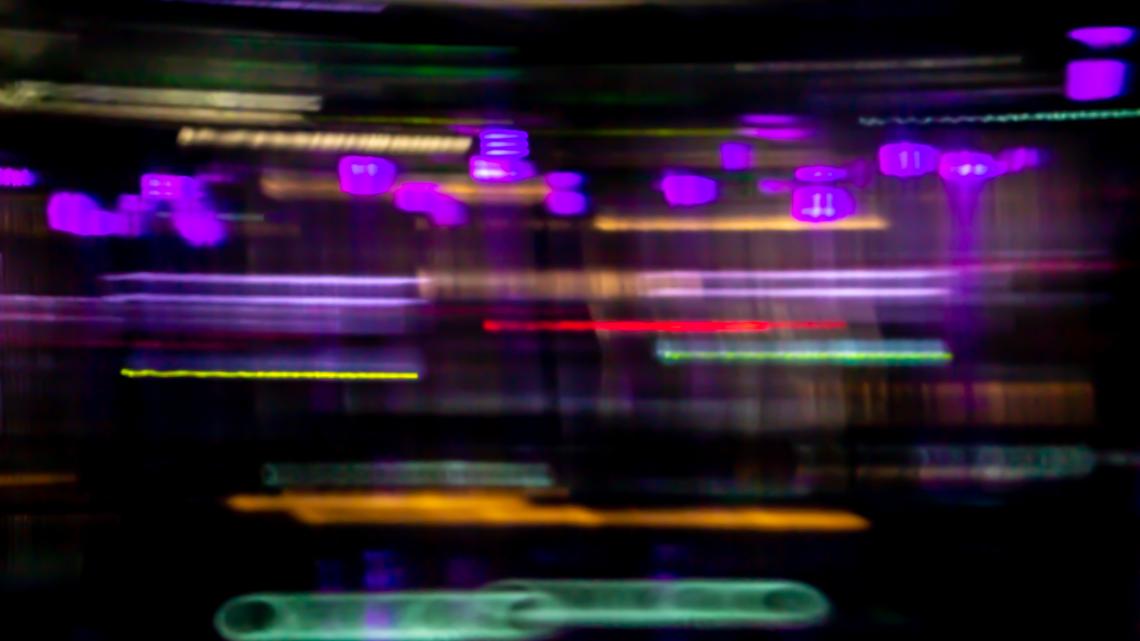 The signals that direct the "Particle Shrine" come from five small cosmic-ray detectors in the exhibit, plus a live feed from the Super Kamiokande neutrino observatory in Japan. 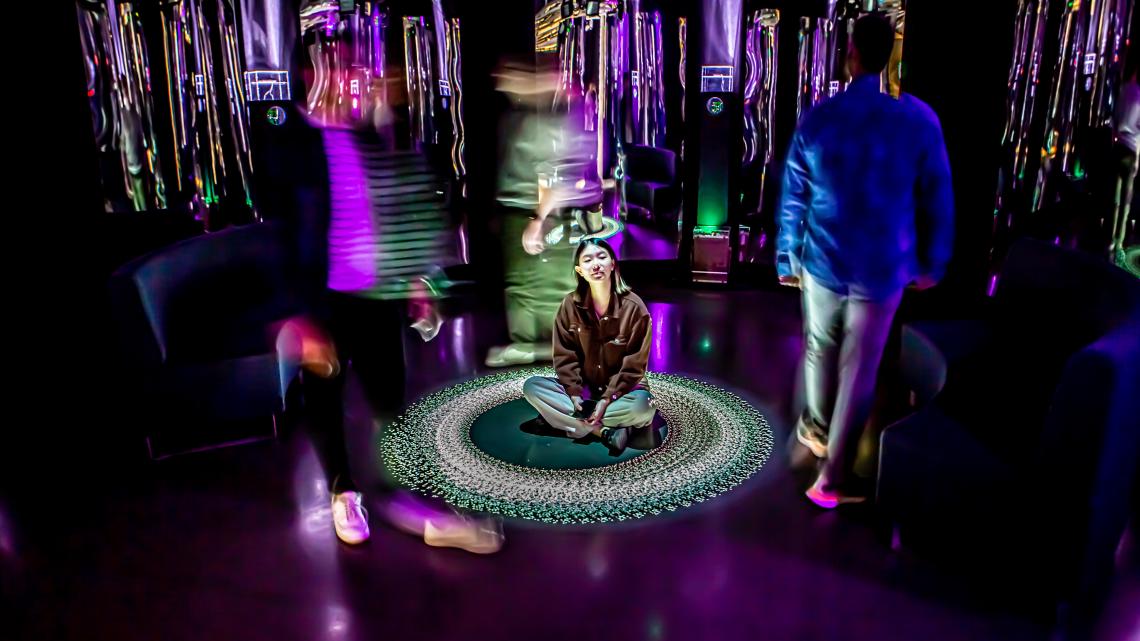 The project was developed as part of two artists' residencies, one at King's College London and another at Snape Maltings / Britten Pears Arts. 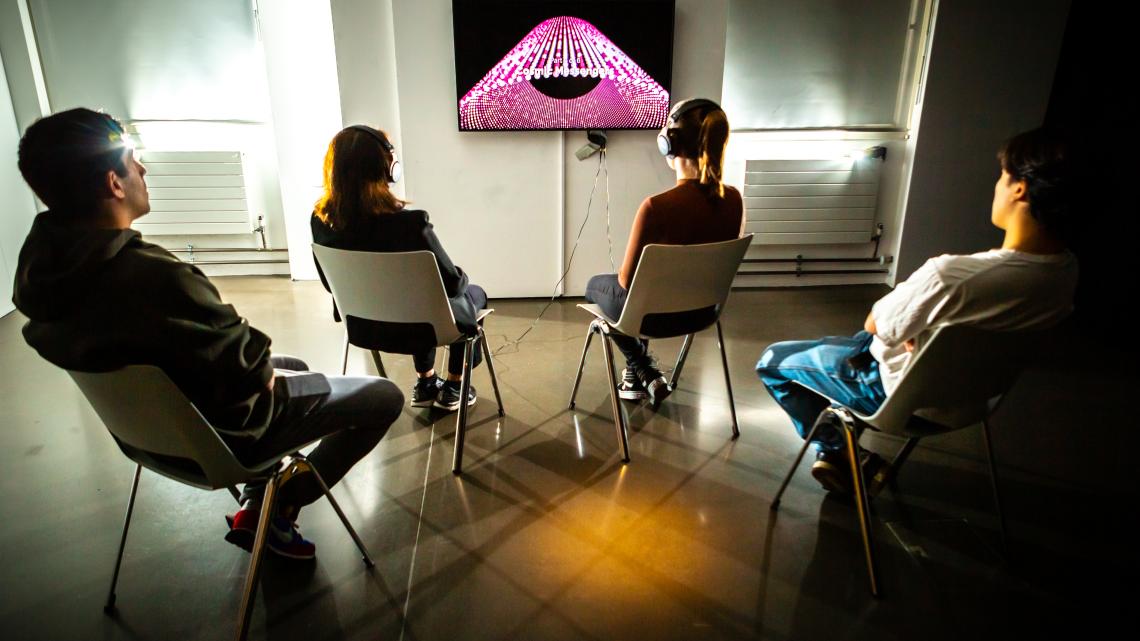 Visitors watch a video explaining the science behind the “Particle Shrine.” 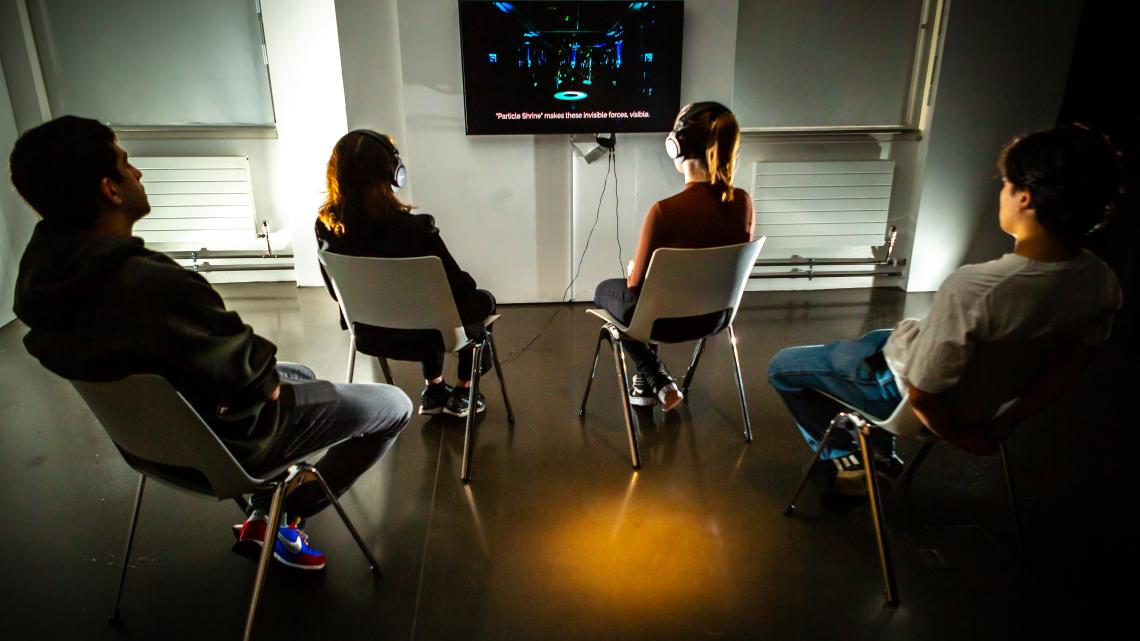 The video explains that the vibrations of the mirrors correspond to the energy of cosmic rays passing through the detectors. 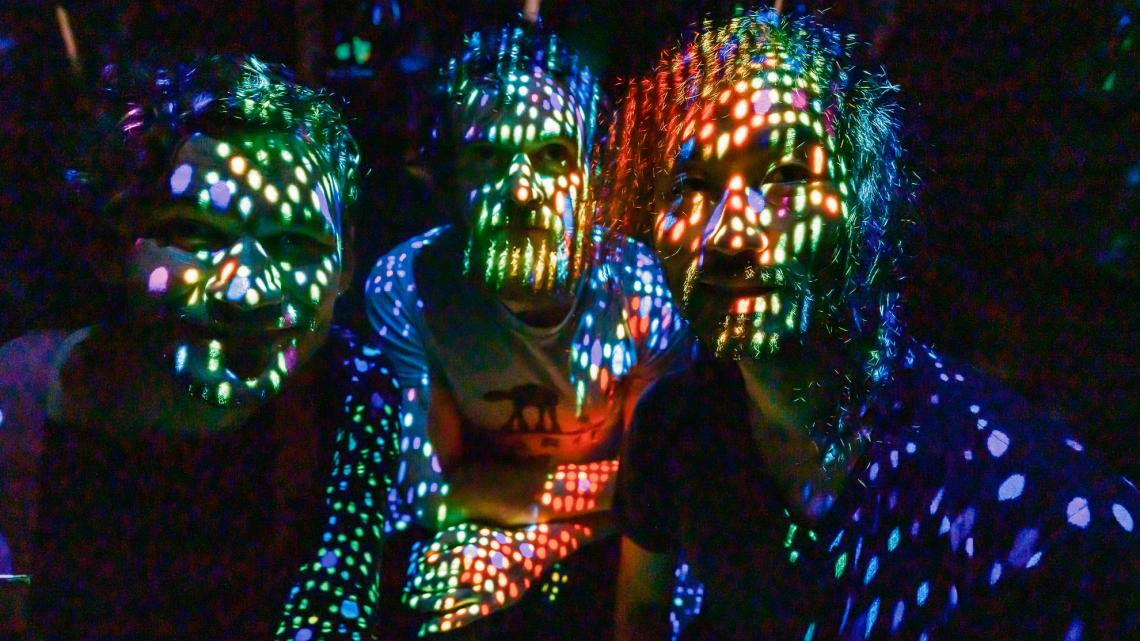 A projector produces colored lights controlled by signals from the Super Kamiokande detector.

Courtesy of Matt Jolly
Previous Next

In 2008 in Chicago, Katori met the members of a hula-hooping, marching street band in bunny ears called Environmental Encroachment. He says he spent so much time with them that, in 2011, he asked them if he could join the band.

They welcomed him and suggested that he try the trombone. Katori did not play trombone. But he was willing to learn. “And I suddenly started to play trombone,” he says. “I played harmonica and piano, so I could read the notes, but I never played any brass instrument … I never took any lessons, but I played, and we traveled.”

In 2013, Katori moved to England for a job as a lecturer at Queen Mary University of London. He also joined the experimental collaborations for the Japan-based T2K and Super-Kamiokande, or Super-K, neutrino experiments.

His foray into the world of brass music brought him back to the US that same year for a festival just outside of Boston called Honk: A festival of activist street bands. There, he befriended musician and fellow Londoner Christo Squier, founder and creative director of the London-based band Perhaps Contraption.

Katori and Squier hit it off, bonding over shared passions for the mysteries of the cosmos and the power of music. They stayed in touch after the festival.

In 2019, Katori secured a new job as a reader—equivalent to an associate professor in the US—at King’s College London. When he learned that King’s College’s Science Gallery London had an artist residency program, through which artists collaborate with academic researchers, he knew exactly whom to call.

Don’t be a stranger

Neutrinos interact only very rarely with other matter. But that doesn’t mean they aren’t present. Neutrinos are all around us. In the time it takes to read this sentence, trillions upon trillions of them will pass through your body.

To detect the elusive particles, scientists must use gigantic detectors. Only a fraction of a percent of particles actually leave a signal in the detector.

With funding from King’s College, Katori and Squier set out to find a way to introduce people to the extremely shy particles all around them. Their idea was to take live data from Super-K and turn the invisible particles into something people could perceive: sound.

Katori knew the physics, and Squier could envision the final product, but they needed someone who could implement their idea to sonify the data from Super-K. For this, they enlisted the help of Chris Ball, the brother of a Perhaps Contraption trombonist, who specializes in the technical aspects of art installations.

“When I threw some ideas at him, he was like ‘Yeah, I can do that,’” Squier says. “And literally within like a week … he had written the first patch to do it.”

Together they turned the Super-K detector—a cylindrical tank more than 130 feet tall nestled beneath a mountain in Japan—into a kind of musical instrument. They divided the cylinder into eight slices, one for each note on a musical scale. The origin of each signal in the detector determined what note it played. Notes at the bottom of the cylinder were assigned a lower octave, and notes at the top were assigned a higher octave.

They called their first effort “Subatomic.” It took the form of a performance at the Snape Maltings concert hall, on the bank of the River Alde, as part of the 2021 Britten Pears summer festival. It was a blend of improvised music and composed music based on past Super-K data and played by a group of string and brass musicians, along with a percussionist.

Physics at the gallery

Katori, Squier and Ball have since developed the live show “Subatomic” into an installation called “Particle Shrine.”

In the new installation, at Science Gallery London, they add CosmicWatch cosmic-ray detectors, which detect other kinds of particles raining down from space. Ball, the technician, rigged five cosmic-ray detectors so that signals from falling cosmic rays, which deposit different amounts of energy, would trigger different intensities of flashing lights, vibrating mirrors or sounds.

Squier, the composer, chose what sounds the falling rays would trigger. “I picked a lot of sounds that were very ethereal and very cosmic,” Squier says. “I really want people to take away this sense that there's these messengers that are passing through all the time. And these messengers have traveled mind-boggling distances in this achingly rare, achingly vast universe.”

They reprised a “Subatomic” performance for the installation’s opening in a concert hall in the same building as the exhibit. At one point, in an unrehearsed interstellar duet, the musicians jammed with incoming cosmic rays, seen and heard via a “Particle Shrine” live feed.

Squier makes it clear that the universe produces the data, his contribution is simply to determine how “Particle Shrine” visitors experience it. “I don't want to be under any pretense that this is the sound of the universe,” he says. “There's sort of … random parameters from the universe that are influencing the creative decisions and the creative outputs.”

Visitors don’t need knowledge of particle physics to appreciate the exhibit, Ball says. But the exhibit may inspire those visitors to develop an appreciation for the science it represents.

“An art installation like this can make you aware of something that you weren't previously aware you were interested in,” he says. “It can take you from a complete obliviousness to a topic, complete ignorance, to, ‘Oh I have at least a passing familiarity with that phrase or that word.’ And I think even just that that move is important.”

“Scientists like me always try to explain particle physics and it's too precise and meticulous,” he says. “But by using this space in ‘Particle Shrine,’ you can feel it.”