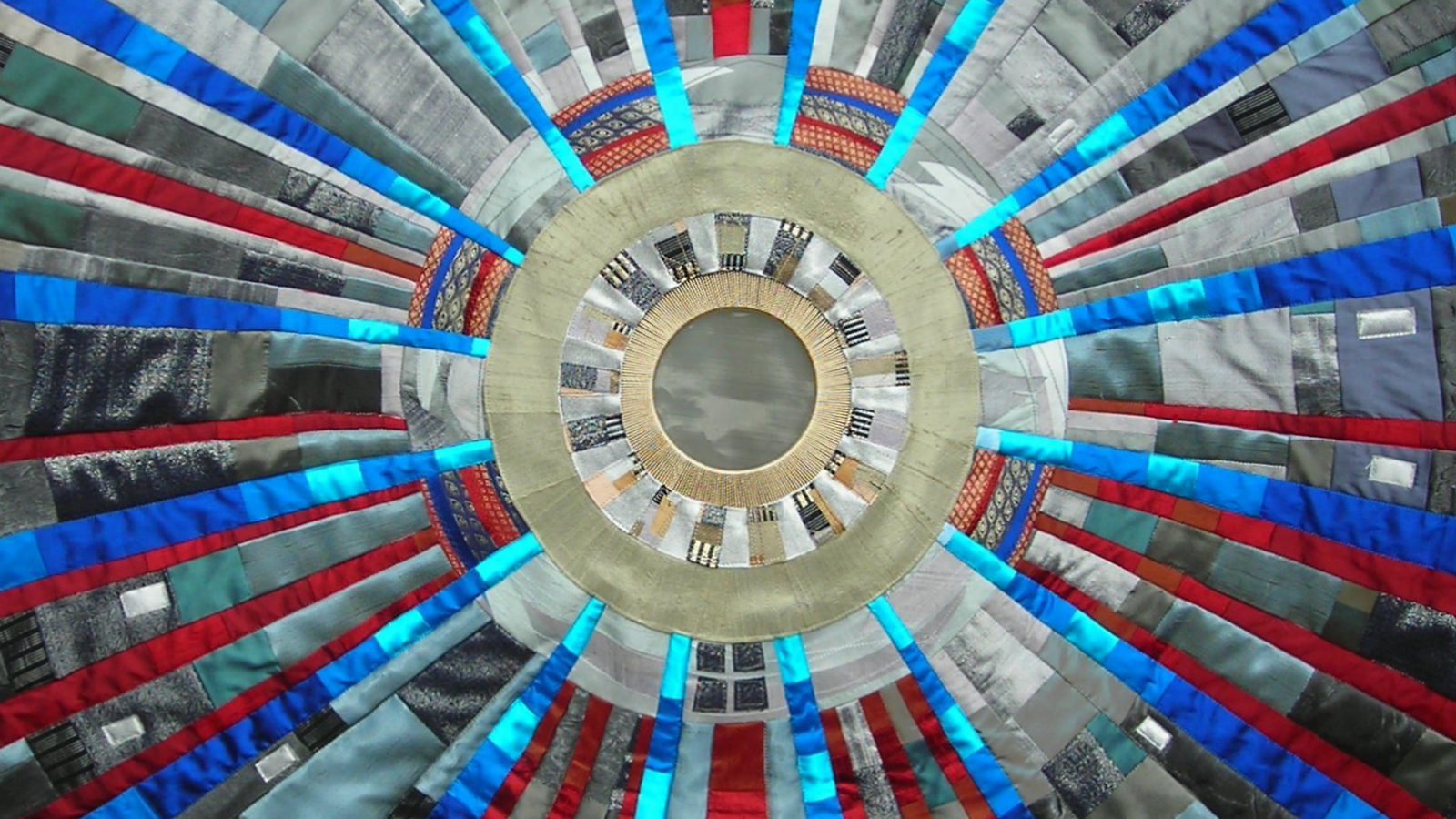 The Large Hadron Collider, a steely pinnacle of physics and engineering, doesn’t generally bring soft, snuggly thoughts to mind. But that may change for people who see Kate Findlay’s quilts. For four years, she has been making fabric-based artwork inspired by the accelerator and its experiments. “I’ve been living and dreaming and sleeping and eating hadron colliders,” she says.

Photos of the LHC particle detectors in a 2008 newspaper article sparked the quilting project. Findlay was struck by the recurring circle-in-square motif—circular detectors inside the photos’ square frames—which she says is a common pattern found throughout history in mathematics and art. Her collection debuts next year in a series of exhibitions throughout Southern England.

Findlay used traditional patchwork for her three earliest pieces, “Breakthrough,” “Inner Eye,” and “Does the Dark Matter?” Because of the way fabric moves, this technique makes creating circles a fiendish feat. After six to eight weeks of sewing, and down to the final piece, she says, “My heart was absolutely in my mouth.” Until she finished, she had no idea whether everything would line up and lie flat.

Her other quilts are done with appliqué, a collage-like style of attaching pieces. Most are about 60 by 60 centimeters and take 10-14 days to complete, though she has made a few larger, 130-by-130-centimeter quilts as well. Findlay uses unconventional fabrics, lots of metallic, shiny bits or sheers, along with beads, sequins, cardboard, and even barbecue skewers, which she inserts along the back to add rigidity. “I started using everything and anything to achieve the effect I wanted,” she says. “Sometimes you realize you’ve just found the perfect medium. I feel I can get the effects I want with fabric.”

Findlay’s background is in textiles, and she teaches art at a private elementary school in Henley-on-Thames, England. The last two terms she spent on sabbatical to focus on the LHC quilts. 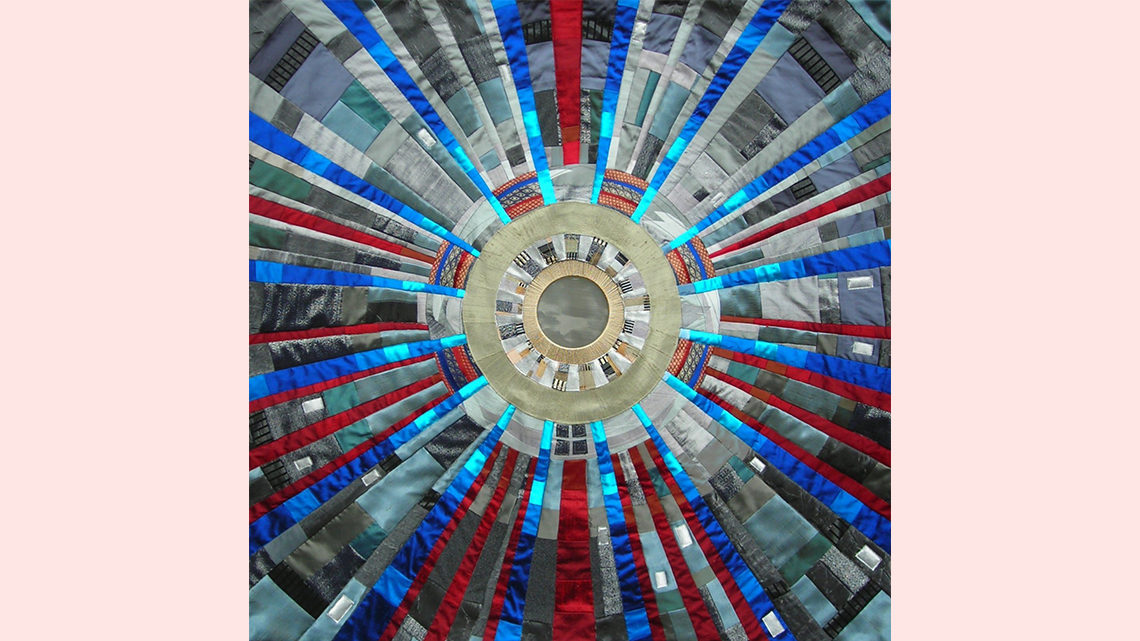 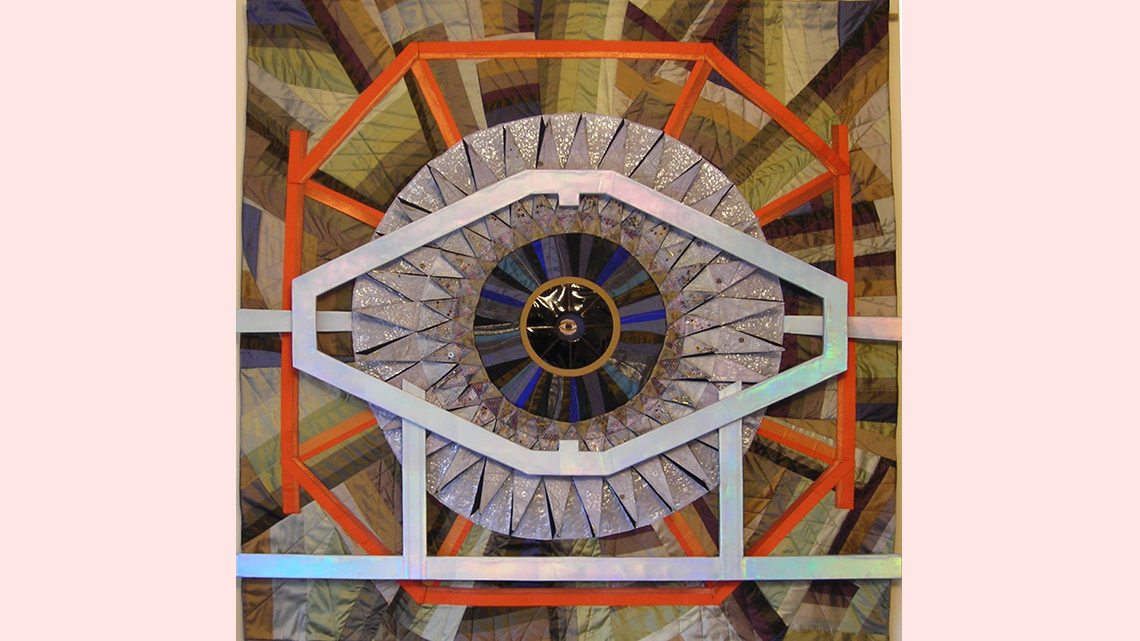 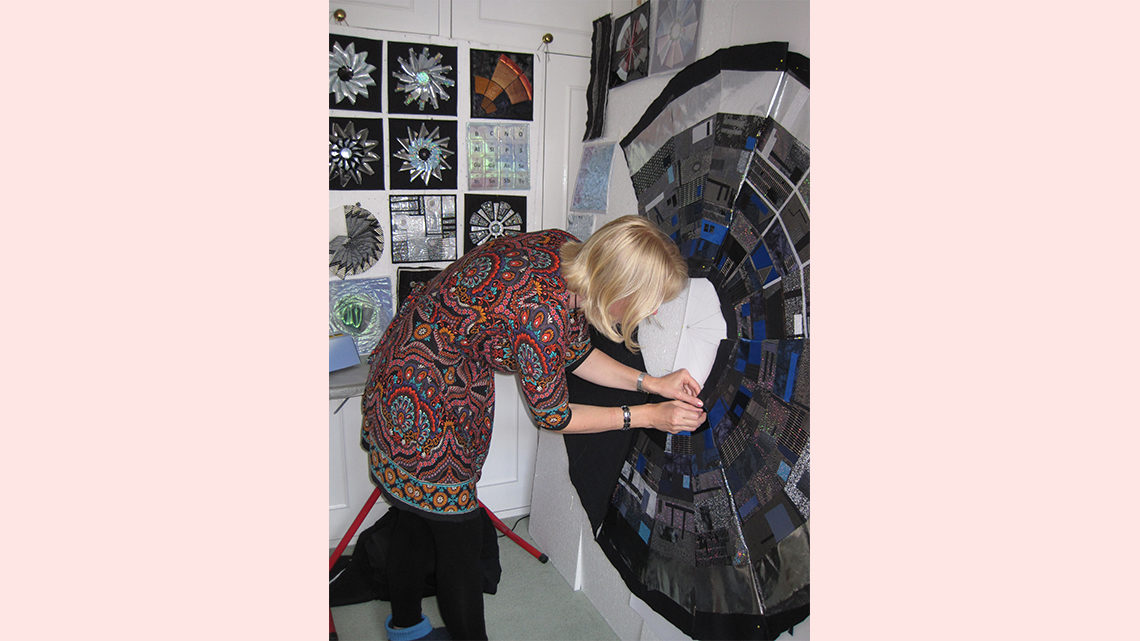 Kate Findlay at work on the construction of The Alice Adventure in her studio. 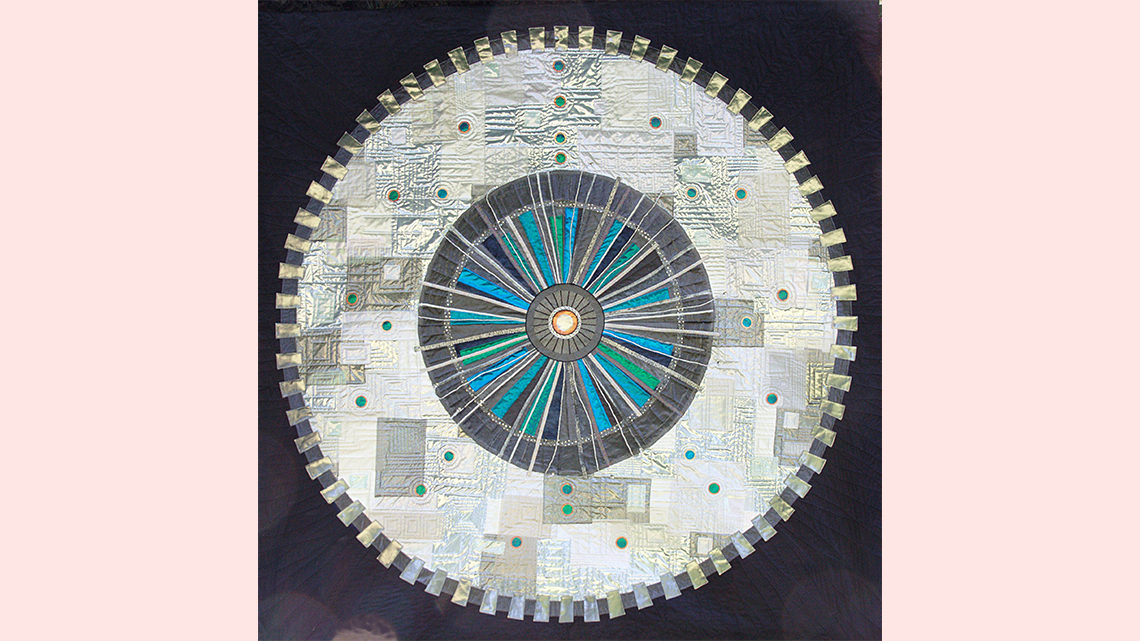 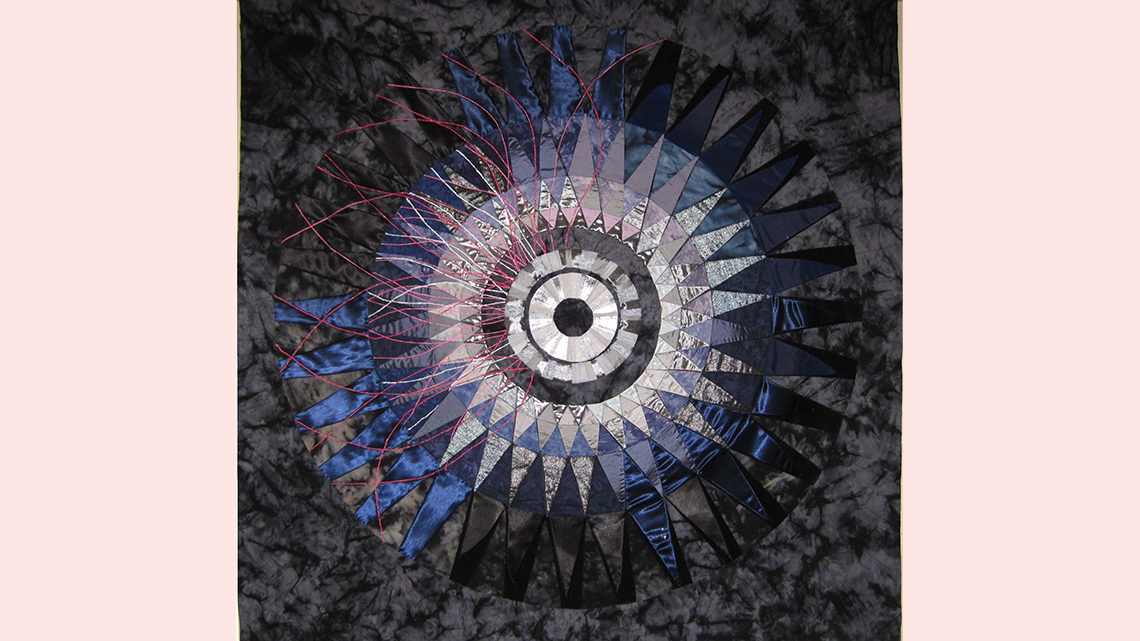 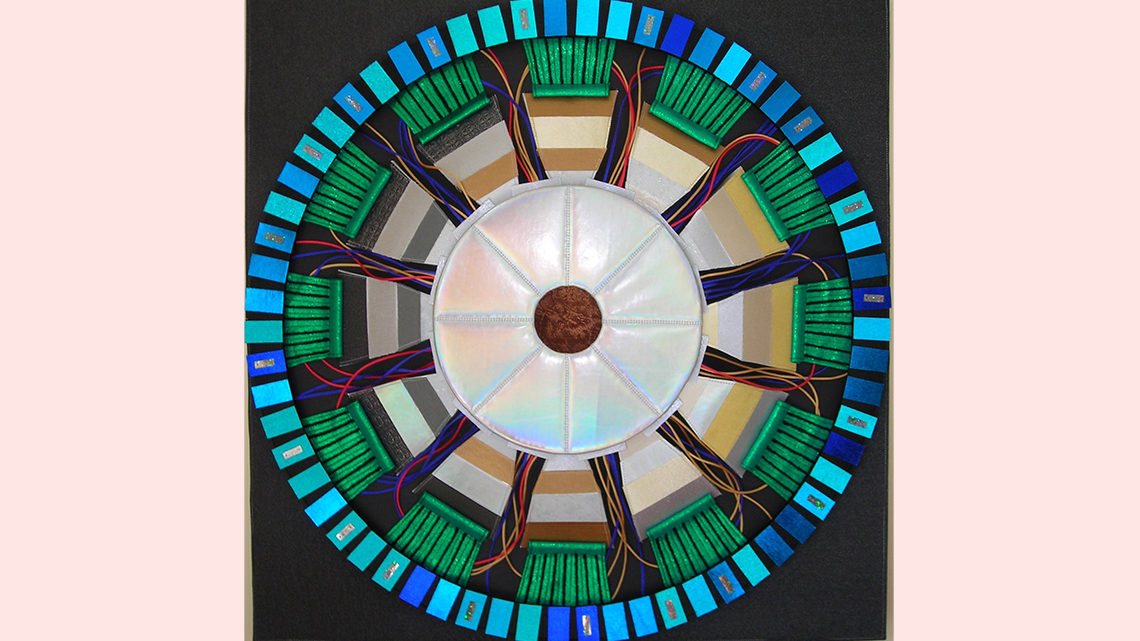 Hadron4 2009
Size: 60 cm square.
Materials: Fabric, wire, cords, foam board, on hardboard.
Note: This piece is not a quilt, although much of it is made with fabric. 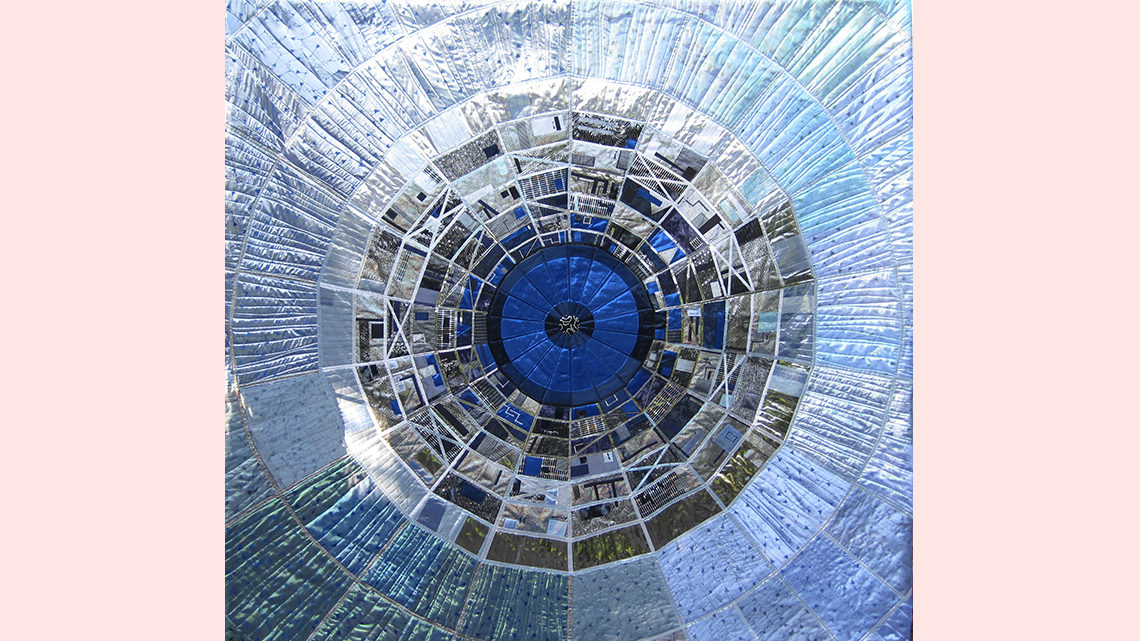 Courtesy of Kate Findlay
Previous Next

In her spare time, she reads about particle physics, an interest that has grown from her initial fascination with the machine. “Maybe I’m just barking up the wrong tree,” she says, “but I’m hoping my take and interpretation will still be valid.” Findlay has yet to talk to a scientist and wonders whether one would notice details in her artwork that the average person might miss.

Her recent pieces incorporate more of the subatomic world itself. She is particularly struck by the scale differences present in accelerator experiments: the vastness of the universe and the machine’s substantial bulk compared to the minute world of particles. Her quilt “Atomic” shows the structure of a chromium atom in dots overlaid on a detector. “It’s the combination of huge and tiny,” she says. “I am aware the atom has far more space between its electrons, but that is where artistic license comes in.”

She hopes her unusual choice of subject matter will capture the interest of a more diverse public and increase the reach of the medium as a whole. “It’s just that a lot of quilts are pretty-pretty, nature-based,” she says.

Lately, Findlay has been expanding her topics and techniques. “”I am delving into some of the concepts put forward by physicists about wave particle duality, supersymmetry and string theory,” she says, going on to explain that she bought some fiber optic cable and is experimenting with sewing it into fabric. “There is so much more I could do yet with that subject matter.”