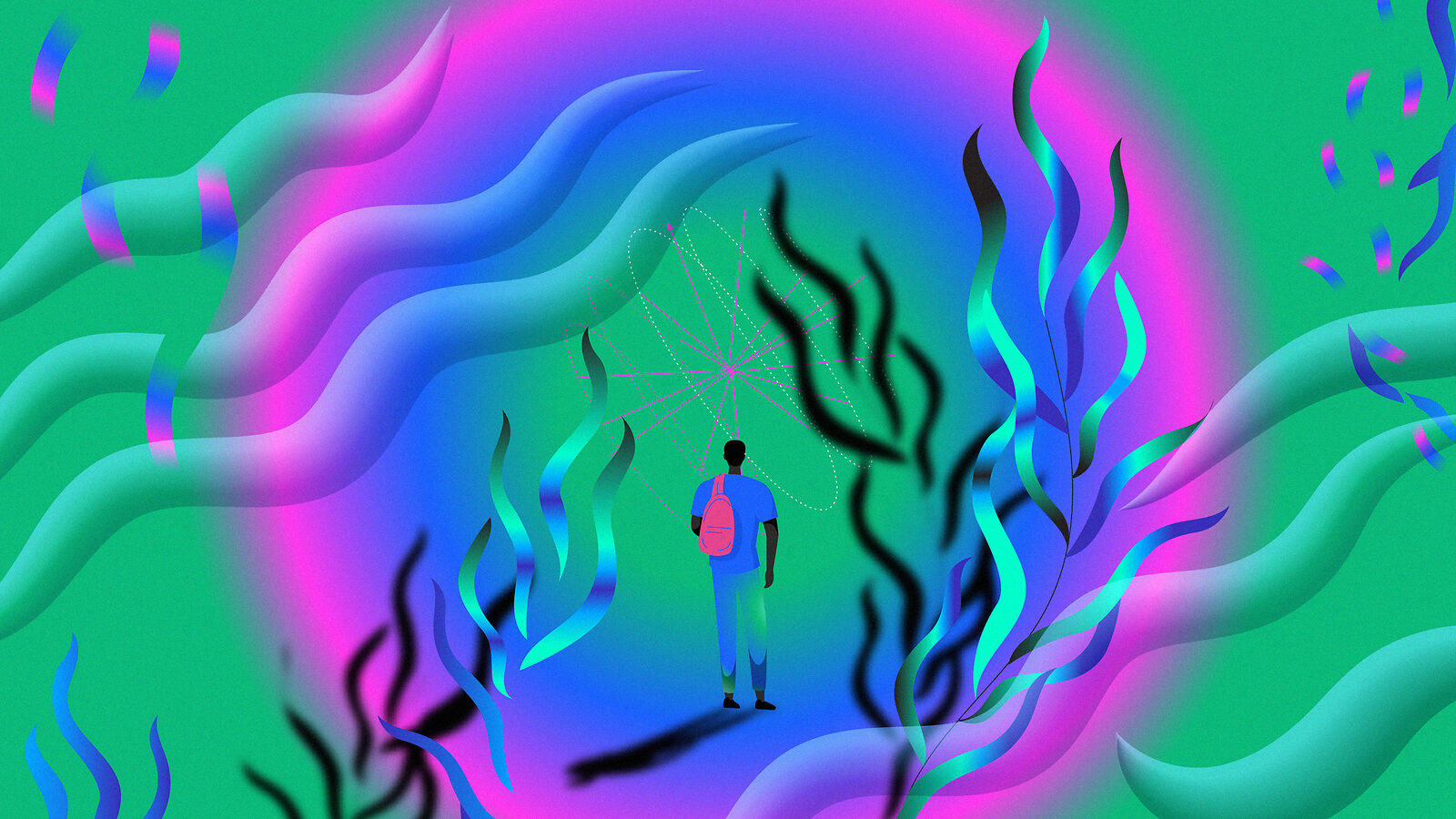 The sixth person to earn a doctoral degree in physics from an American institution was African American scientist Edward Alexander Bouchet. It was 1876, just 11 years after the US had adopted a constitutional amendment that outlawed slavery.

Never again have African Americans made up such a large percentage of US physicists. In fact, it would take another 42 years before a second African American man earned a physics PhD in the United States.

That was Elmer Imes, a contemporary of Albert Einstein, who earned his degree from the University of Michigan in 1918. His doctoral work established some of the earliest direct experimental evidence of quantum theory, making him a crucial historical figure in quantum physics and quantum information science.

But the accomplishments of Black scientists like Imes and Bouchet are not well known, says Charles Brown, a postdoctoral researcher at the University of California, Berkeley. “Black people have been contributing to the progress of research groups for a long time, and just not really having enough of a spotlight on them… which is why when you go to Wikipedia, and you try to look people up, it's hard to find anything,” he says.

Physicists see an opportunity during this period of growth: to prioritize diversity, equity and inclusion now, rather than trying to fix more entrenched issues later.

Like Imes, Brown searches for insights into the quantum realm. And like fellow Yale graduate Bouchet, Brown finds himself in a small pool of physics PhDs: According to a survey by the American Institute of Physics, “quantum foundations and information science” ranks among the smallest subfields in physics, having granted an average of just 30 PhDs per year in 2017 and 2018.

The US and other nations plan to grow what they’re calling the “quantum workforce,” and they’re going to need people with the right level of expertise to fill it, says Thomas Searles, an associate professor at the University of Illinois, Chicago. “There is a large issue of this new, burgeoning industry where there are going to be significant problems with the workforce and sustaining it,” he says.

Physicists like Searles and Brown see an opportunity during this period of growth: to prioritize diversity, equity and inclusion now, rather than trying to fix more entrenched issues later. They suggest this will require confronting systemic problems in education and academia while simultaneously investing in programs that will help Black researchers succeed.

The hope is that there will be more physicists like Imes and Bouchet. But their stories will feature fewer frustrations and more support—and people will make sure to tell them.

The accomplishments of Black physicists such as Imes and Bouchet are not a sign that they lived lives unhindered by racism. Bouchet was born during slavery, and Imes’ mother was born enslaved. Despite the influence of the two physicists’ work, neither one was able to secure a university job upon earning their PhDs. Imes eventually found his way back into academia at historically Black institution Fisk University in the segregated South.

And while progress has been made, there is still a long way to go. According to a report AIP published in February 2021, African Americans hold just nine of the 1,023 physics PhDs earned by US citizens in 2018 and 2019, less than 1%. That number represents a precipitous drop over previous years, with the number of annual African American PhD recipients trending steadily downward since 2012.

Things are just as dire at the undergraduate level. A 2019 AIP report found that African American undergraduates earned 175 of the 7,329 physics bachelor’s degrees earned in 2015, just over 2%.

“This is a pipeline issue,” says James Whitfield, an assistant professor of physics at Dartmouth College. “Pipelines don't open up just because you want to start getting people from them. You get people into the STEM tracks when they’re in middle school. From there it's a decade of training until college graduation and another half-decade or more to get a doctorate.

“But I need applicants for quantum computing now. We've got the graduate program up and running. There are job openings. There are faculty positions.”

Whitfield says that getting more African Americans into STEM fields in general could help with recruitment in quantum information science. “I think a lot of it is also just having the expertise to switch into quantum computing,” he says. “If a software engineer or a microwave engineer decides to switch over, retraining him or her takes far less time because the background is already there.”

Getting more young Black students into STEM also requires reaching out to their families and communities to make sure they see scientific fields as viable career paths, says Sandra Charles, who serves as Chief Equity, Diversity and Inclusion Officer at the US Department of Energy’s Fermi National Accelerator Laboratory. “Especially with minority communities, oftentimes, when we're talking about those younger students, they don't have parents or significant figures in their lives who can speak to the promise or the possibilities within the field,” she says.

In addition to encouraging Black students to enter physics, it’s important to make sure they aren’t pushed back out again, Brown says. Physics culture can be exclusionary and even hostile toward young Black students, especially at the most elite institutions, which are often the least diverse, he says.

“I was a Black person in a place where there are very few Black people,” Brown says, referring to his time as a PhD student. “The people that were there had very few or zero previous intellectual interactions with Black people and just had a hard time understanding that I was part of [the group]. I had a really hard time connecting with people and being respected, actually, just plain and simple.”

Kahlil Dixon, a postdoctoral researcher at Sandia National Laboratories, echoed this sentiment. After a positive undergraduate experience at an HBCU, Dixon says he found his experience as a graduate student at Louisiana State University more challenging.

“One of the biggest differences was the lack of Black students in the physics department,” he says.

LSU has a sizable Black student population, but Dixon says the student demographics drastically changed when he entered the school’s physics building. “I definitely felt like quitting, um, a lot. I’d say about half of it was due to PhDs just being hard, and the other half was just not seeing any people like me, really.”

Farrah Simpson, a PhD candidate at Brown University, noted that intersectional identities—for example, being a Black woman in quantum physics, or being Black and a member of the LGBTQ+ community—can make things even more difficult, even when support exists. “In certain spaces, people want you to be just one thing, or they don't want you to be your whole self,” she says. “And that's something that I constantly have to battle with, because I am absolutely in my whole self at all times and hold all these identities all the time.”

Today, there are several organizations and initiatives working to raise awareness of careers in quantum information science in the Black community, and to recruit more Black students to physics and STEM in general.

Since the 1970s, the National Society of Black Physicists has worked to foster community and promote the academic and professional success of Black physicists. In recent years, some of the physics community’s oldest professional organizations have launched diversity initiatives, such as the AIP National Task Force to Elevate African American Representation in Undergraduate Physics & Astronomy (TEAM-UP).

There has also been an emergence of grassroots efforts facilitated by social media, such as Brown’s work organizing both Wikipedia-editing “wikithons” and #BlackInPhysics Week, which aims to celebrate and raise awareness of the contributions made by Black physicists.

An IBM initiative called the IBM-HBCU Quantum Center—for which Searles was a co-founder and former director—aims to encourage students at historically Black colleges and universities to explore research opportunities and careers in quantum computing. It is part of a broader investment in HBCUs by IBM, including an additional $100 million for technology, assets, resources, and skills development through the IBM Skills Academy academic initiative.

Quantum schools and programs that aim to recruit and educate diverse students also are being developed and offered at the five new national quantum research centers set up by the Department of Energy in 2020. This includes a fellowship specifically for Black and African American postdoctoral researchers offered by the Superconducting Quantum Materials and Systems Center at Fermilab. The Carolyn B. Parker Fellowship is named after the first African American woman awarded a postgraduate degree in physics.

Still, there are challenges, especially for the Black students and researchers who have taken on the lion’s share of the work required to manage these efforts. “Because our numbers are low, it can be hard to find the people who want to take up organizing roles,” Brown says.

Ensuring widespread access to the education and opportunities associated with quantum research is a task with many intersecting parts, and it’s a responsibility that all scientists share, says Alberto Di Meglio, the head of CERN’s Quantum Technology Initiative.

“If access to opportunities is given only to certain countries or communities, this might increase the famous digital divide even more,” he says. “Since this field is just beginning, this is the moment to understand how these gaps can be avoided. We need to discuss how to reduce gaps, because in quantum, there is the opportunity to avoid the gap from forming in the first place.”

Brown agrees. “It’s important to improve climate, improve equity for everyone,” he says. “As humans, as members of this society, we should all have a stake in making sure that each of us has access to the resources that we need to be successful, regardless of the color of your skin.”