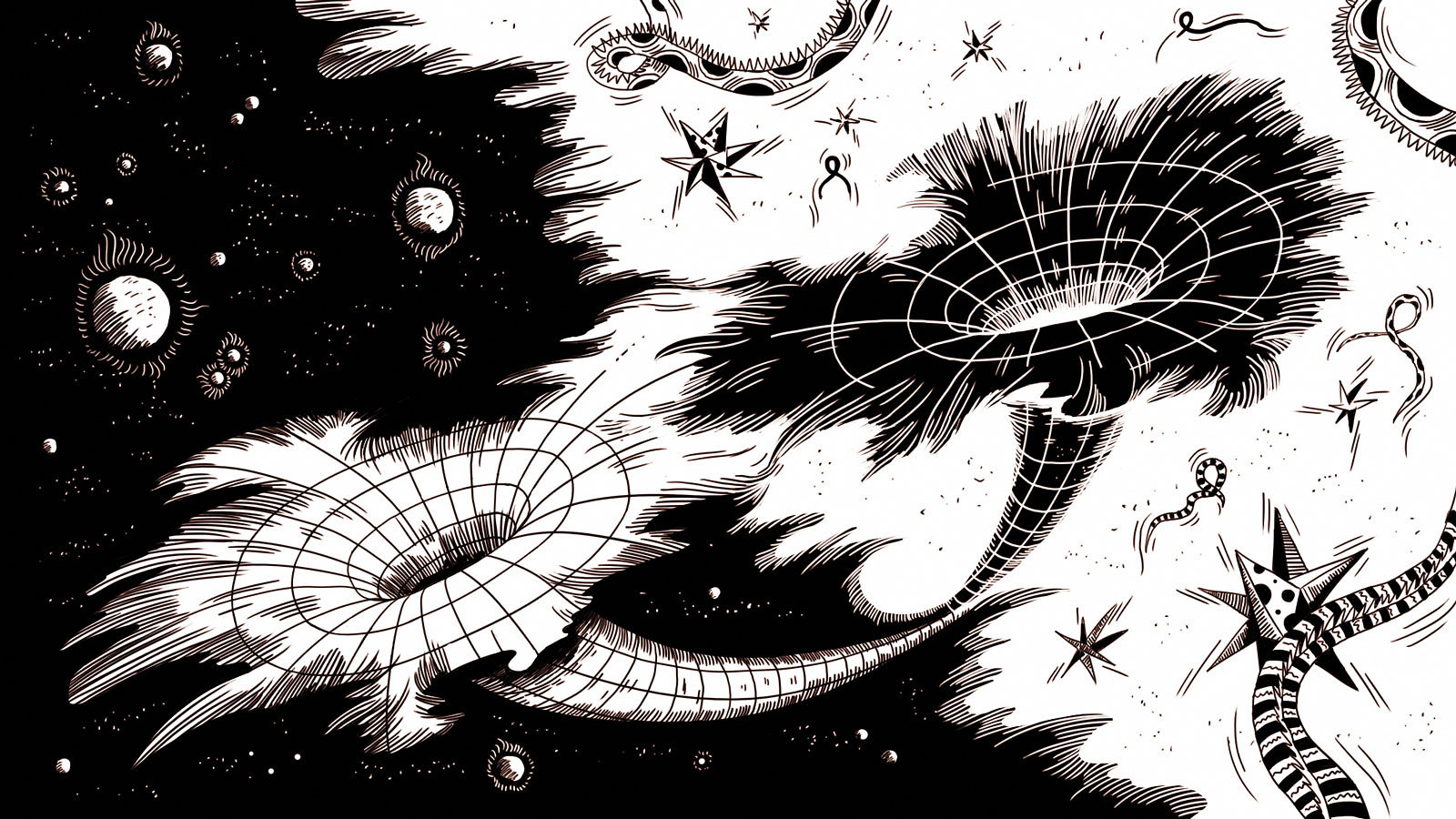 Let yourself be pulled into the weird world of black holes.

Imagine, somewhere in the galaxy, the corpse of a star so dense that it punctures the fabric of space and time. So dense that it devours any surrounding matter that gets too close, pulling it into a riptide of gravity that nothing, not even light, can escape.

And once matter crosses over the point of no return, the event horizon, it spirals helplessly toward an almost infinitely small point, a point where spacetime is so curved that all our theories break down: the singularity. No one gets out alive.

Black holes sound too strange to be real. But they are actually pretty common in space. There are dozens known and probably millions more in the Milky Way and a billion times that lurking outside. Scientists also believe there could be a supermassive black hole at the center of nearly every galaxy, including our own. The makings and dynamics of these monstrous warpings of spacetime have been confounding scientists for centuries. 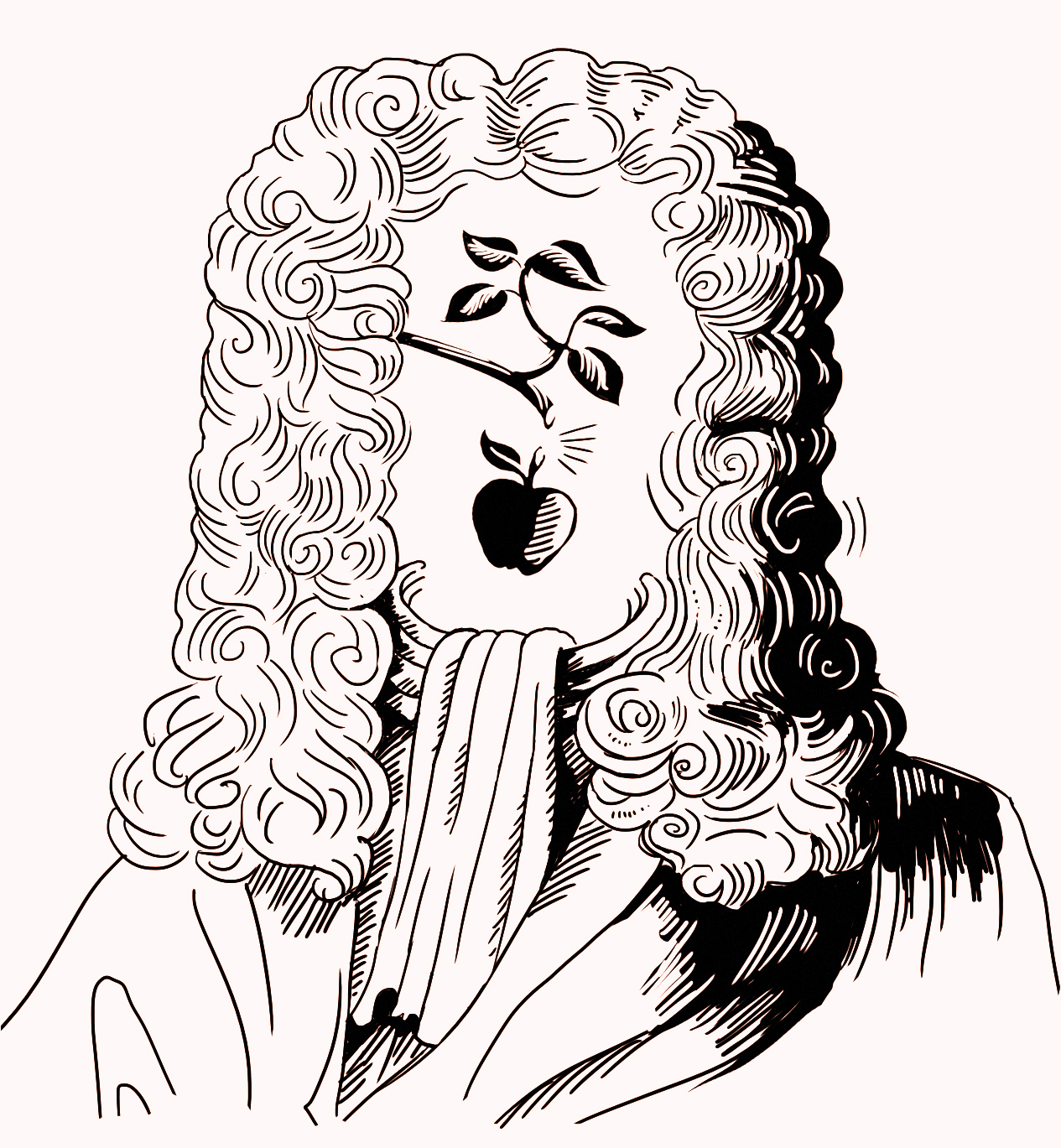 A history of black holes

It all started in England in 1665, when an apple broke from the branch of a tree and fell to the ground. Watching from his garden at Woolsthorpe Manor, Isaac Newton began thinking about the apple’s descent: a line of thought that, two decades later, ended with his conclusion that there must be some sort of universal force governing the motion of apples and cannonballs and even planetary bodies. He called it gravity.

It was Newton’s discovery of the laws of gravity and motion that, 100 years later, led Reverend John Michell, a British polymath, to the conclusion that if there were a star much more massive or much more compressed than the sun, its escape velocity could surpass even the speed of light. He called these objects “dark stars.” Twelve years later, French scientist and mathematician Pierre Simon de Laplace arrived at the same conclusion and offered mathematical proof for the existence of what we now know as black holes.

In 1915, Albert Einstein set forth the revolutionary theory of general relativity, which regarded space and time as a curved four-dimensional object. Rather than viewing gravity as a force, Einstein saw it as a warping of space and time itself. A massive object, such as the sun, would create a dent in spacetime, a gravitational well, causing any surrounding objects, such as the planets in our solar system, to follow a curved path around it.

A month after Einstein published this theory, German physicist Karl Schwarzschild discovered something fascinating in Einstein’s equations. Schwarzschild found a solution that led scientists to the conclusion that a region of space could become so warped that it would create a gravitational well that no object could escape.

Up until 1967, these mysterious regions of spacetime had not been granted a universal title. Scientists tossed around terms like “collapsar” or “frozen star” when discussing the dark plots of inescapable gravity. At a conference in New York, physicist John Wheeler popularized the term “black hole.” 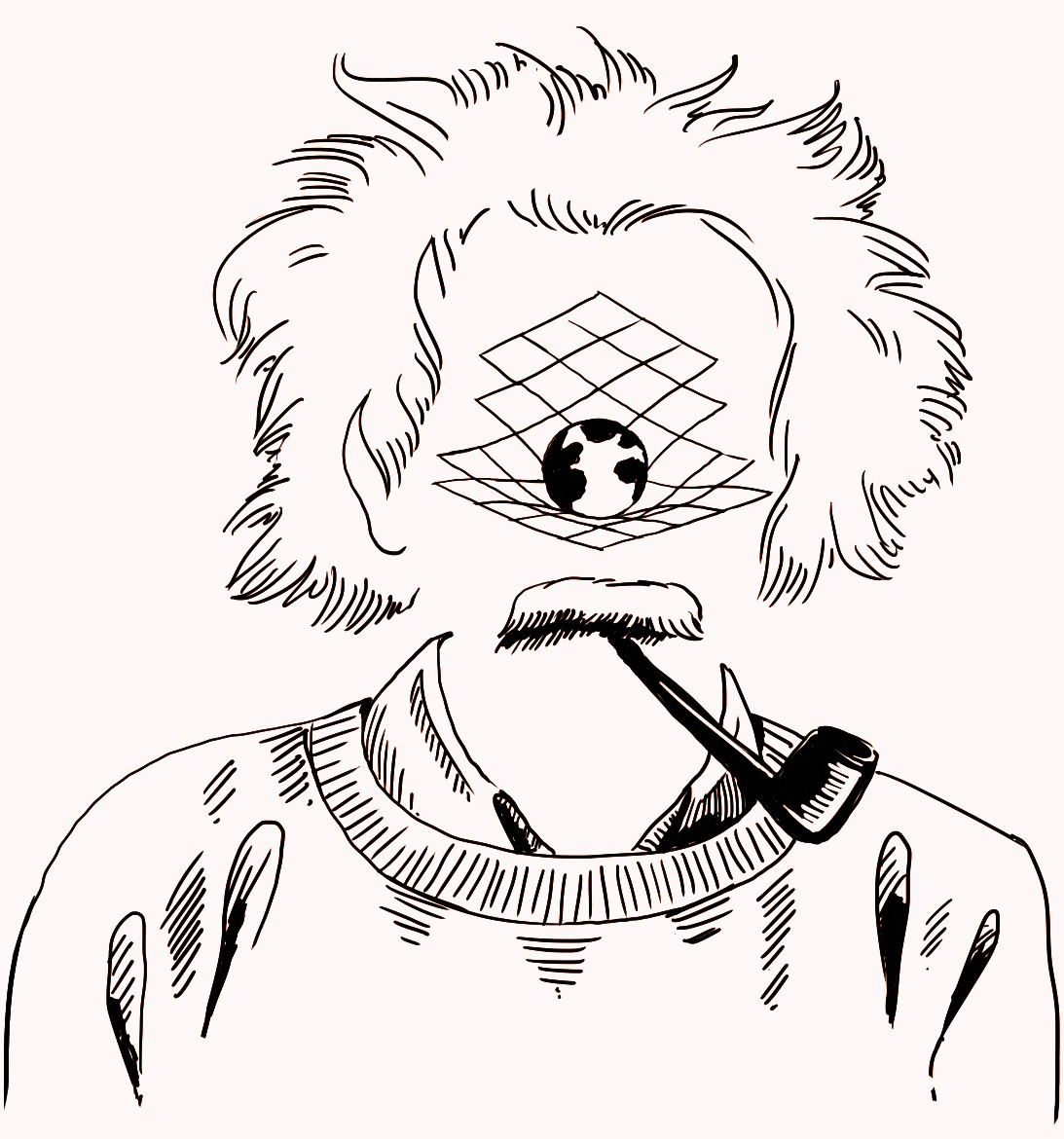 How to find a black hole

Some black holes are formed when massive stars collapse. Others, scientists believe, were formed very early in the universe, a billion years after the big bang.

There is no limit to how immense a black hole can be, sometimes more than a billion times the mass of the sun. According to general relativity, there is also no limit to how small they can be (although quantum mechanics suggests otherwise). Black holes grow in mass as they continue to devour their surrounding matter. Smaller black holes accrete matter from a companion star while the larger ones feed off of any matter that gets too close.

Black holes contain an event horizon, beyond which not even light can escape. Because no light can get out, it is impossible to see beyond this surface of a black hole. But just because you can’t see a black hole, doesn’t mean you can’t detect one.

Scientists can detect black holes by looking at the motion of stars and gas nearby as well as matter accreted from its surroundings. This matter spins around the black hole, creating a flat disk called an accretion disk. The whirling matter loses energy and gives off radiation in the form of X-rays and other electromagnetic radiation before it eventually passes the event horizon.

This is how astronomers identified Cygnus X-1 in 1971. Cygnus X-1 was found as part of a binary star system in which an extremely hot and bright star called a blue supergiant formed an accretion disk around an invisible object. The binary star system was emitting X-rays, which are not usually produced by blue supergiants. By calculating how far and fast the visible star was moving, astronomers were able to calculate the mass of the unseen object. Although it was compressed into a volume smaller than the Earth, the object’s mass was more than six times as heavy as our sun.

Several different experiments study black holes. The Event Horizon Telescope will look at black holes in the nucleus of our galaxy and a nearby galaxy, M87. Its resolution is high enough to image flowing gas around the event horizon.

Scientists can also do reverberation mapping, which uses X-ray telescopes to look for time differences between emissions from various locations near the black hole to understand the orbits of gas and photons around the black hole.

In addition to accretion disks, black holes also have winds and incredibly bright jets erupting from them along their rotation axis, shooting out matter and radiation at nearly the speed of light. Scientists are still working to understand how these jets form. 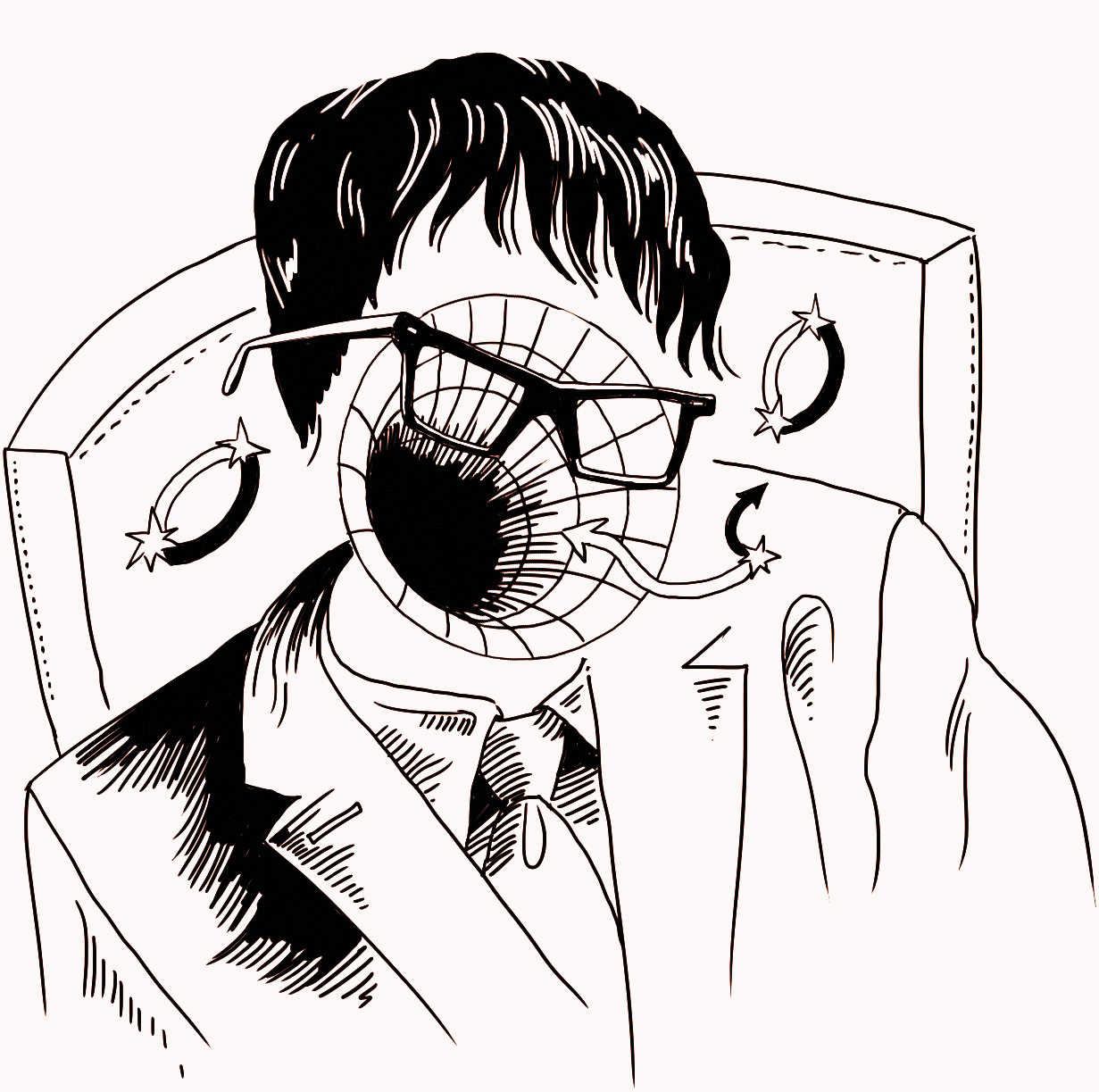 What we don’t know

Scientists have learned that black holes are not as black as they once thought them to be. Some information might escape them. In 1974, Stephen Hawking published results that showed that black holes should radiate energy, or Hawking radiation.

Matter-antimatter pairs are constantly being produced throughout the universe, even outside the event horizon of a black hole. Quantum theory predicts that one particle might be dragged in before the pair has a chance to annihilate, and the other might escape in the form of Hawking radiation. This contradicts the picture general relativity paints of a black hole from which nothing can escape.

But as a black hole radiates Hawking radiation, it slowly evaporates until it eventually vanishes. So what happens to all the information encoded on its horizon? Does it disappear, which would violate quantum mechanics? Or is it preserved, as quantum mechanics would predict? One theory is that the Hawking radiation contains all of that information. When the black hole evaporates and disappears, it has already preserved the information of everything that fell into it, radiating it out into the universe.

Beyond the event horizon, black holes curve into one of the darkest mysteries in physics. Scientists can’t explain what happens when objects cross the event horizon and spiral toward the singularity. General relativity and quantum mechanics collide and Einstein’s equations explode into infinities. Black holes might even house gateways to other universes called wormholes and violent fountains of energy and matter called white holes, though it seems very unlikely that nature would allow these structures to exist.

Sometimes reality is stranger than fiction.