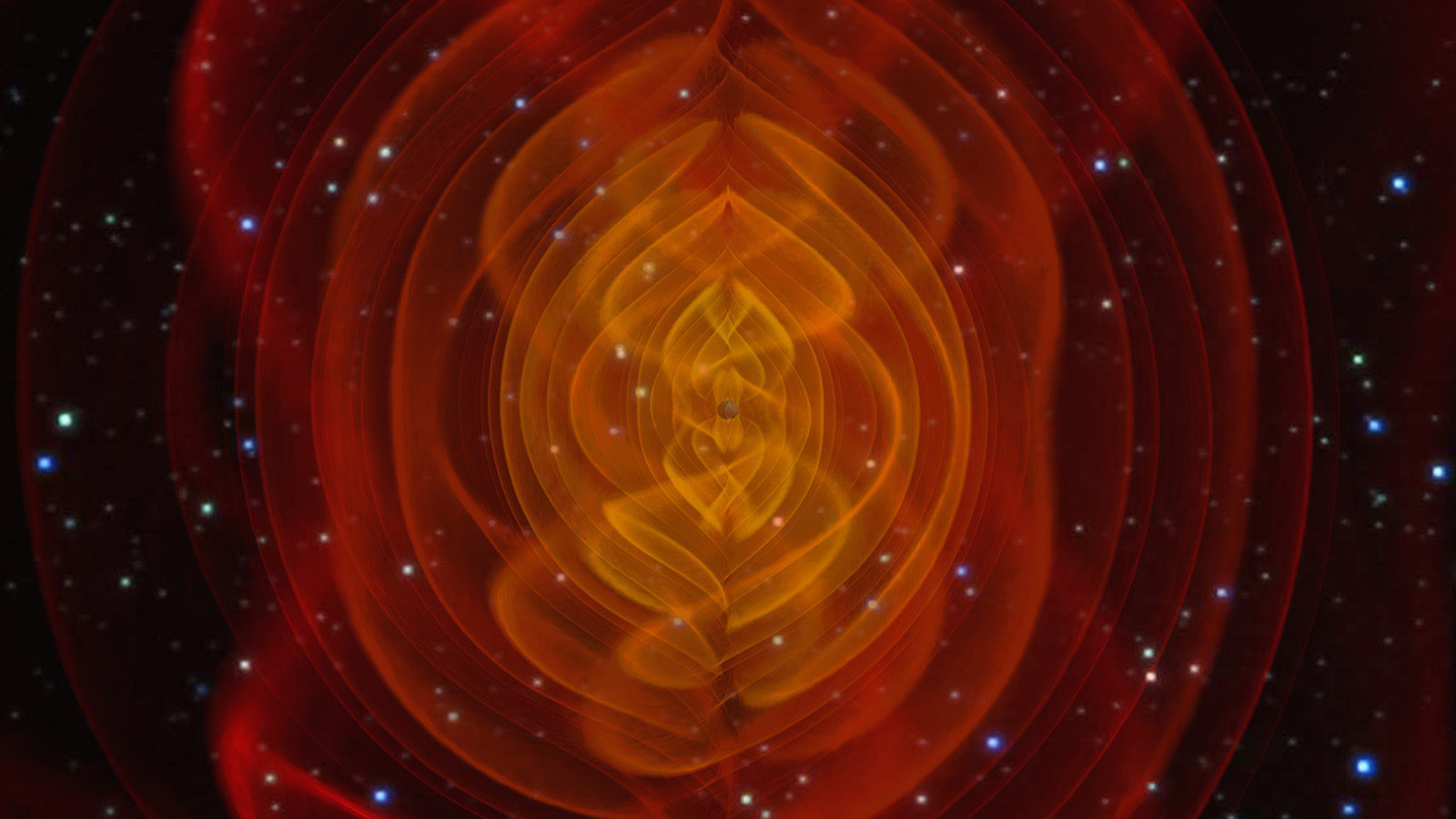 There’s officially a new way to look at the universe, and it’s not with a telescope.

After weeks of speculation, the LIGO Scientific Collaboration and Virgo Collaboration confirmed that they have seen waves in the very fabric of space-time, generated when two orbiting black holes spiraled into one another. So begins an era of gravitational wave astronomy.

These ripples in space were predicted as part of Albert Einstein’s general theory of relativity 100 years ago. While they had been measured indirectly through observation of orbiting pulsars, they had never been directly observed – until now.

“We have detected gravitational waves,” David Reitze, LIGO’s executive director, told a packed room at the National Press Club in Washington, DC, today. “We did it.”

The Advanced Laser Interferometer Gravitational-wave Observatory, or LIGO, picked up signatures of space stretching and warping as the black holes released energy in the form of gravitational waves 1.3 billion years ago. The black holes, 29 and 36 times the mass of the sun and 150 kilometers in diameter, merged to form a larger black hole with 62 solar masses, releasing the rest of the energy in gravitational waves that started speeding towards Earth when multicellular life there was just developing.

The waves from the black hole merger were brief, lasting mere milliseconds. But the output from that collision was “50 times greater than all the power put out by all the stars in the universe put together,” says Kip Thorne, professor of physics at Caltech.

The signal arrived during an engineering test on Sept. 14 last year, a few days before the formal start of Advanced LIGO’s first observing run, which lasted from Sept. 18 until mid-January.

“The signal took a billion years to come to Earth and produce this tiny distortion in our detectors that we are very proud to measure,” says Gabriela González, Louisiana State University professor and spokesperson for the LIGO Scientific Collaboration.

LIGO uses two identical interferometers in Louisiana and Washington to search for gravitational waves. At each one, a laser beam is split so it travels down a pair of perpendicular arms. At the end of each 4-kilometer-long tube, it bounces off a mirror and heads back toward the origin, where it recombines with the rest of the light. 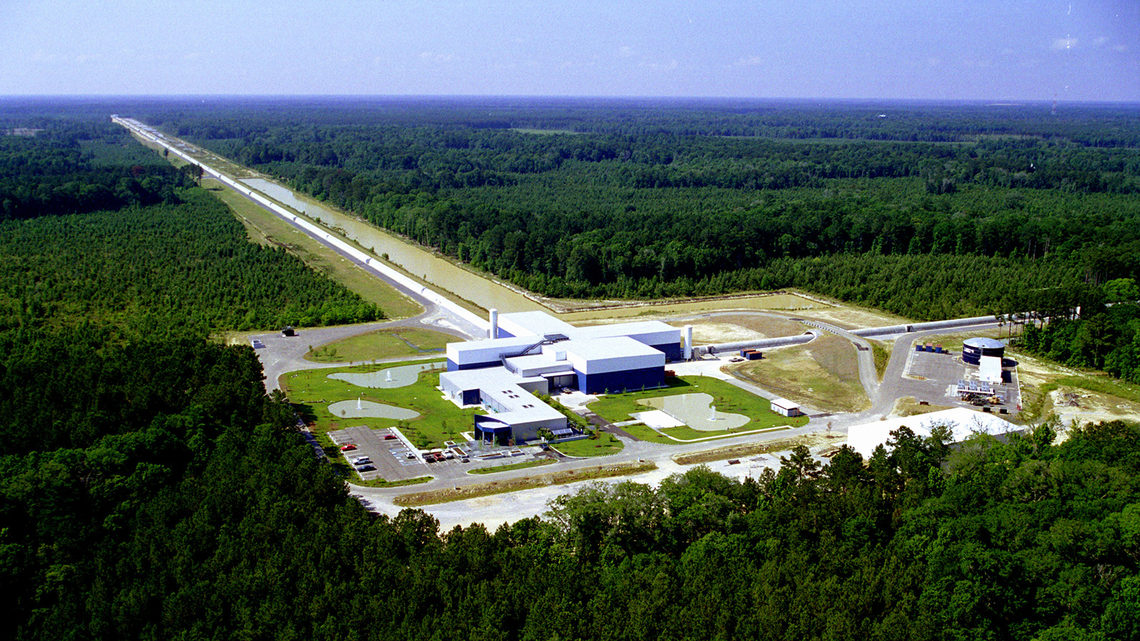 Without gravitational waves, the distance remains identical, and the light waves cancel each other. But if a gravitational wave passes through, it stretches space-time in one direction and compresses it in another. This makes one arm of the interferometer longer than the other, and the waves of light don’t match up as they should, revealing the telltale signal. LIGO is so sensitive, it can detect if the distance between its mirrors changes by 1/10,000 the width of a proton – a positively minuscule measurement.

“This was a truly scientific moonshot,” Reitze says. “And we did it. We landed on the moon.”

Reitze says the collaboration took months of rechecking to make sure that the signal was not a test or a false signal. Scientists confirmed that the signal was a gravitational wave that beautifully matched the prediction made by supercomputers and Einstein’s theory. In addition to being the first direct observation of gravitational waves, this also provided the first proof that binary black holes exist in the universe.

The initial installation of LIGO ran for several years without seeing gravitational waves before beginning a five-year upgrade to create Advanced LIGO. The system is currently running four times better than when it turned off in 2010, but there are still improvements to go. At full capacity, LIGO will be 10 times more sensitive. Upgrades include an additional mirror, a more powerful laser source and improved sensors and seismic isolation.

“We are going to have a huge richness of gravitational wave signals in LIGO” over the coming years, Thorne says. 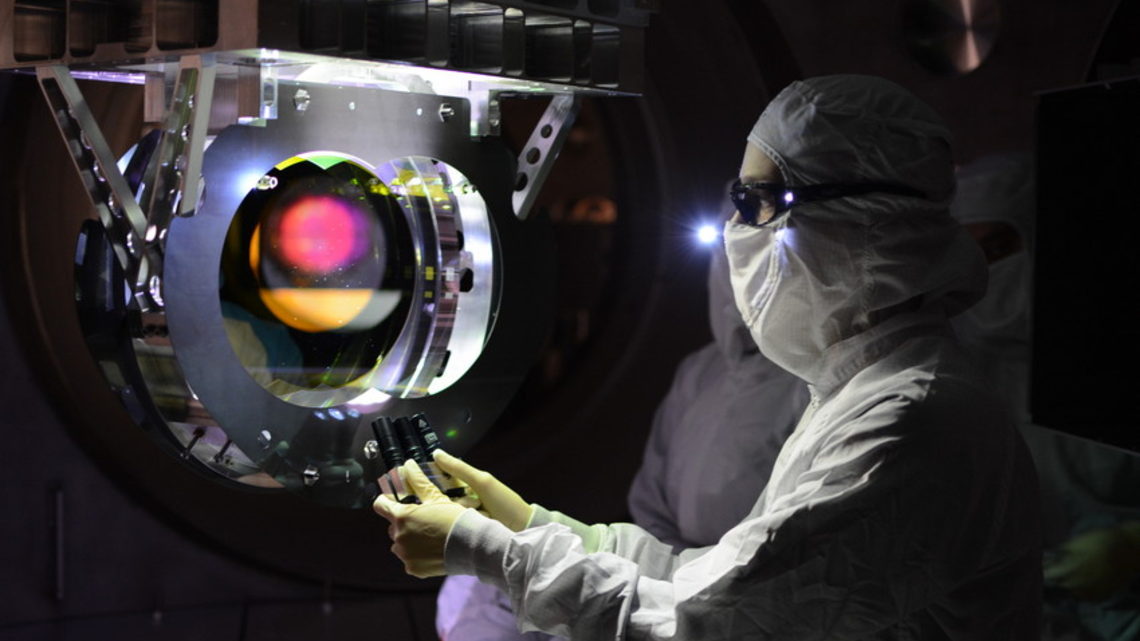 LIGO, which is jointly operated by MIT and Caltech and has collaborators from more than 80 institutions worldwide, is scheduled for a six-month observing run later this year. The project will also eventually be joined later this year by Europe’s Advanced Virgo, a third interferometer that could help triangulate the location of wave-generating objects in the sky. This will help telescope-based astronomers aim their lenses at the right spot to look for optical counterparts when experiments like LIGO see a signal. Japan and India are also slated to have gravitational wave experiments.

Scientists are interested in learning more about the properties of gravitational waves and using them to figure out just how many neutron stars and black holes are around or how binary systems form and change. But the questions don’t stop there. Data coming out of LIGO could help address how matter behaves in extreme conditions, whether general relativity is the right theory of gravity or if the black holes that actually exist line up with the black holes predicted by Einstein’s theory.

“Now that we have detectors able to detect these systems, now that we know binary black holes are out there, we’ll be listening to the universe,” González says.

Gravitational wave astronomy will help scientists peer into our universe in a new way. The course of history has been expanding from visible light–to radio waves, microwaves, gamma rays and even neutrinos. This first direct observation of gravitational radiation is just the next wave of information from the universe.

“This is a very, very special moment,” says France Córdova, director of the National Science Foundation, which funds the LIGO observatories. “It’s seeing our universe with new eyes in an entirely new way.” 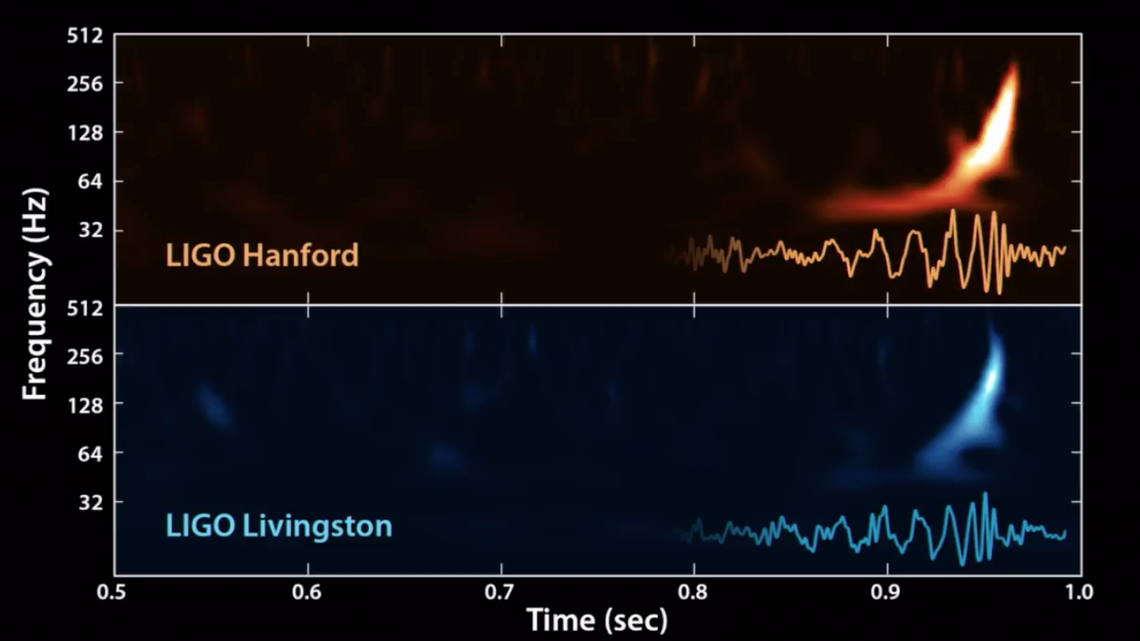 Signals of the binary black hole merger appeared at both LIGO detectors.