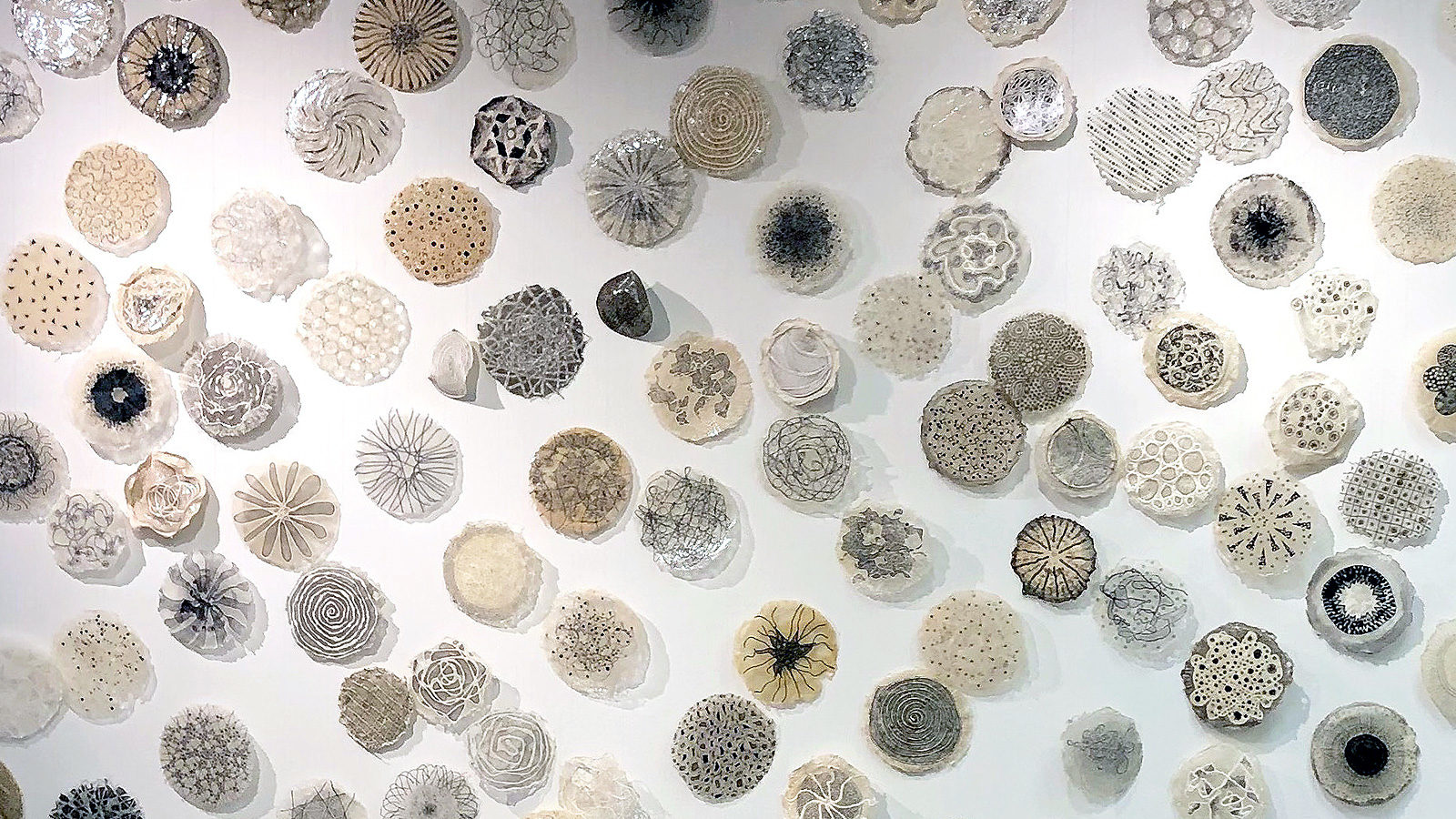 Self-taught artist Shanthi Chandrasekar says curiosity has been the driving force behind her art, a combination of “scientific fact and theories with my wild imagination.” With a background in both physics and psychology, Chandrasekar has branched into different kinds of art, including drawing, printmaking, papermaking, photography, sculpture, and traditional Kolam drawings. Many of these skills are currently on display in Fermilab’s art gallery, where Chandrasekar’s exhibit, “Cosmic Design,” runs through Oct. 31.

Here Chandrasekar breaks down some of the inspiration, concepts, and thought processes behind 10 of the works from “Cosmic Design.”

The theories of inflation (the rapid expansion of the early universe) and multiverses (multiple universes) inspired me to create this installation of eggshell-like forms of handmade paper. Each shell represents an individual universe with its own set of attributes and constants. 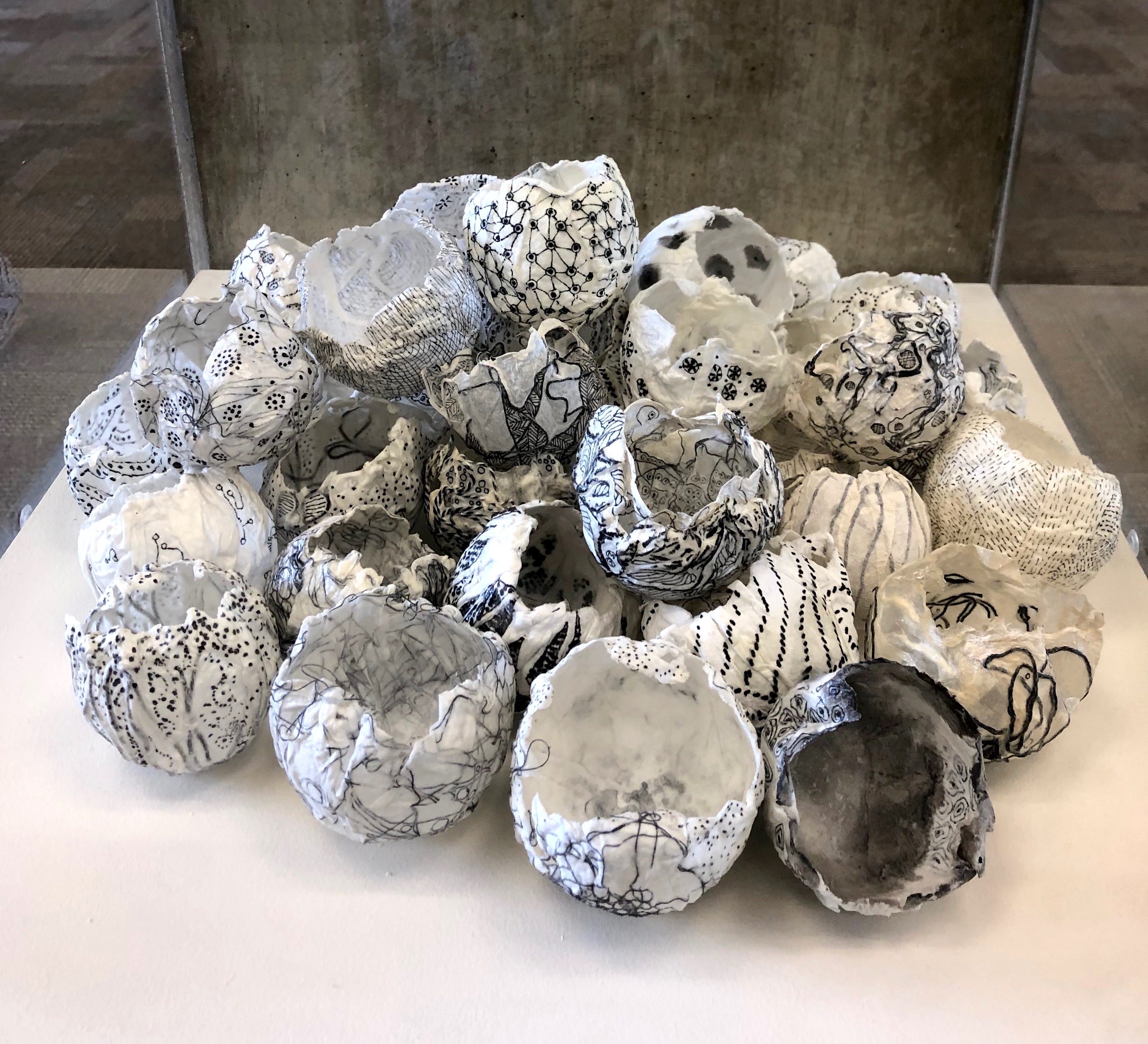 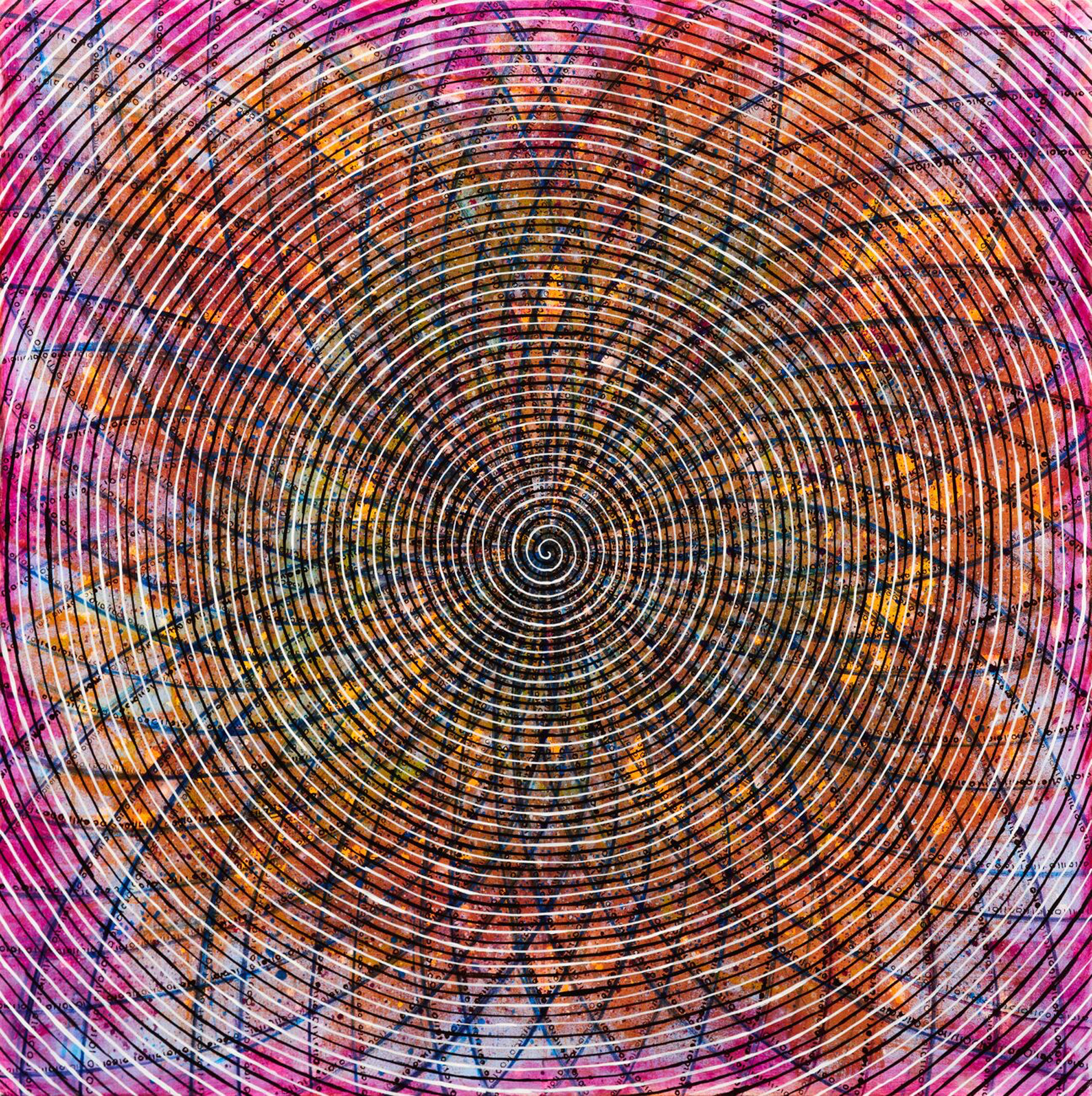 Visualizing four dimensions—three of space, and one of time—is difficult for our perceptions. This painting is my reflection on this challenge; the attached spiraling black and white lines represent space-time and fields. In this painting, the red circles and the dotted lines around them stand in for the fields (such as gravitational, magnetic and electric fields) which sit on the fabric of space-time, represented by the dark blue lines. 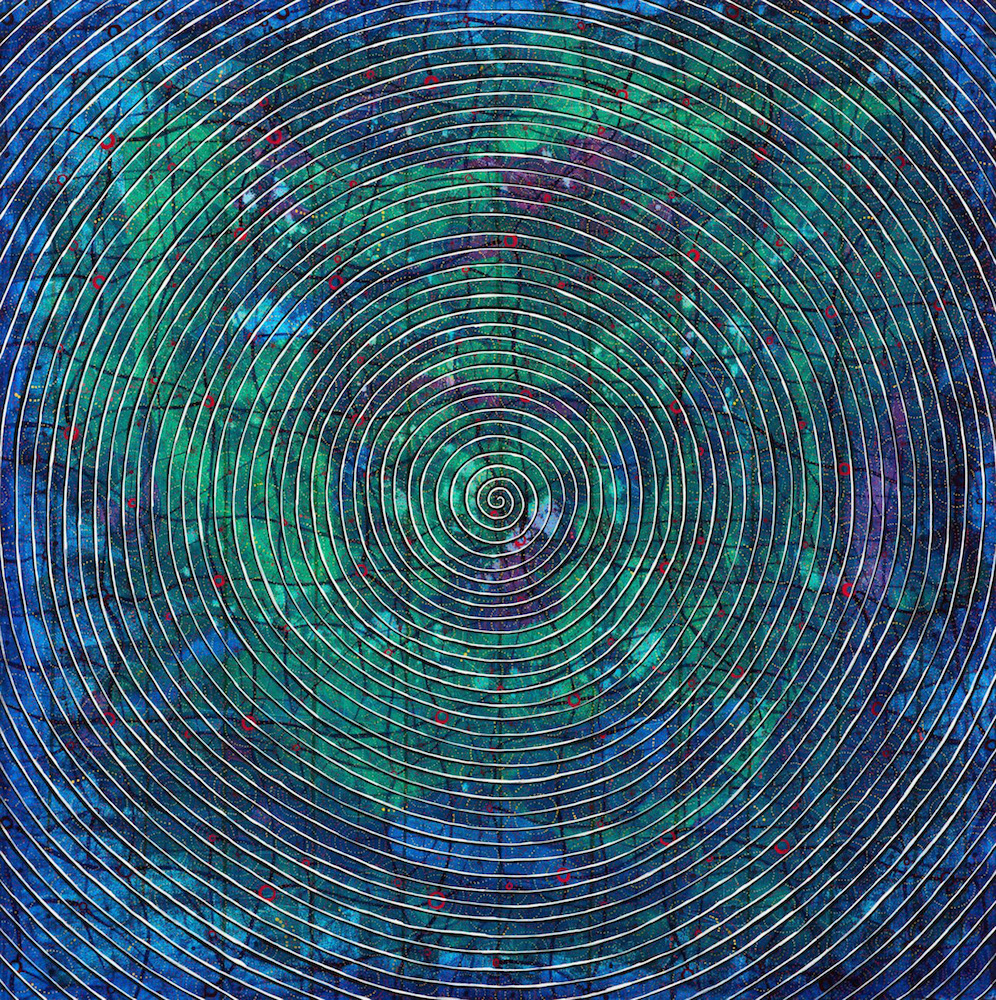 As we know from Einstein’s E=mc2, matter and energy are closely related. I tried to express this idea through the spiraling intertwined black and white lines. The triangles and the red dots in the background create a network of entwined yet distinct space and energy. While I made this painting, I was also thinking about notions of dark matter and dark energy, which make up most of the universe but are invisible to scientific instruments so far. 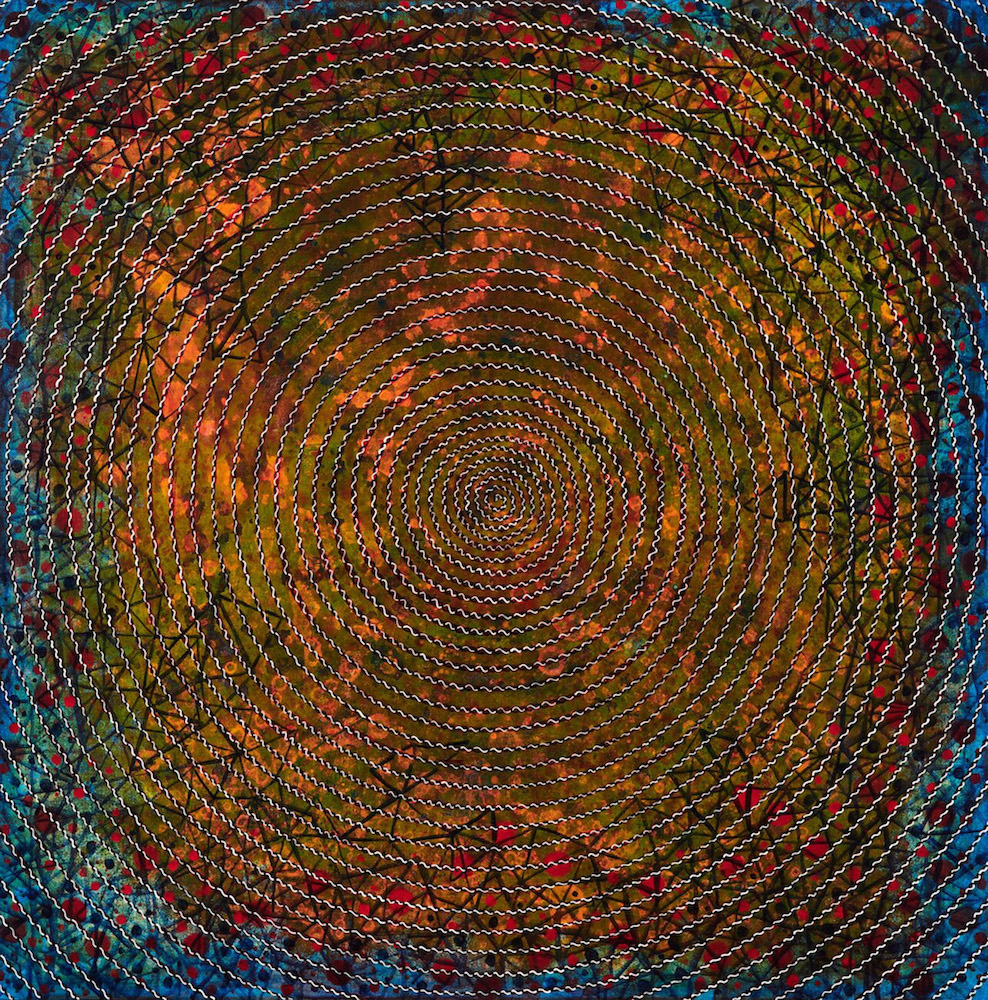 This painting tries to capture the entirety of the cosmos, ranging from the largest cosmic collections (galaxy clusters) to the smallest particles at the same time. I have also tried to evoke the different constants of the cosmos and the concept of probability by incorporating imagery of dice strewn throughout the painting. 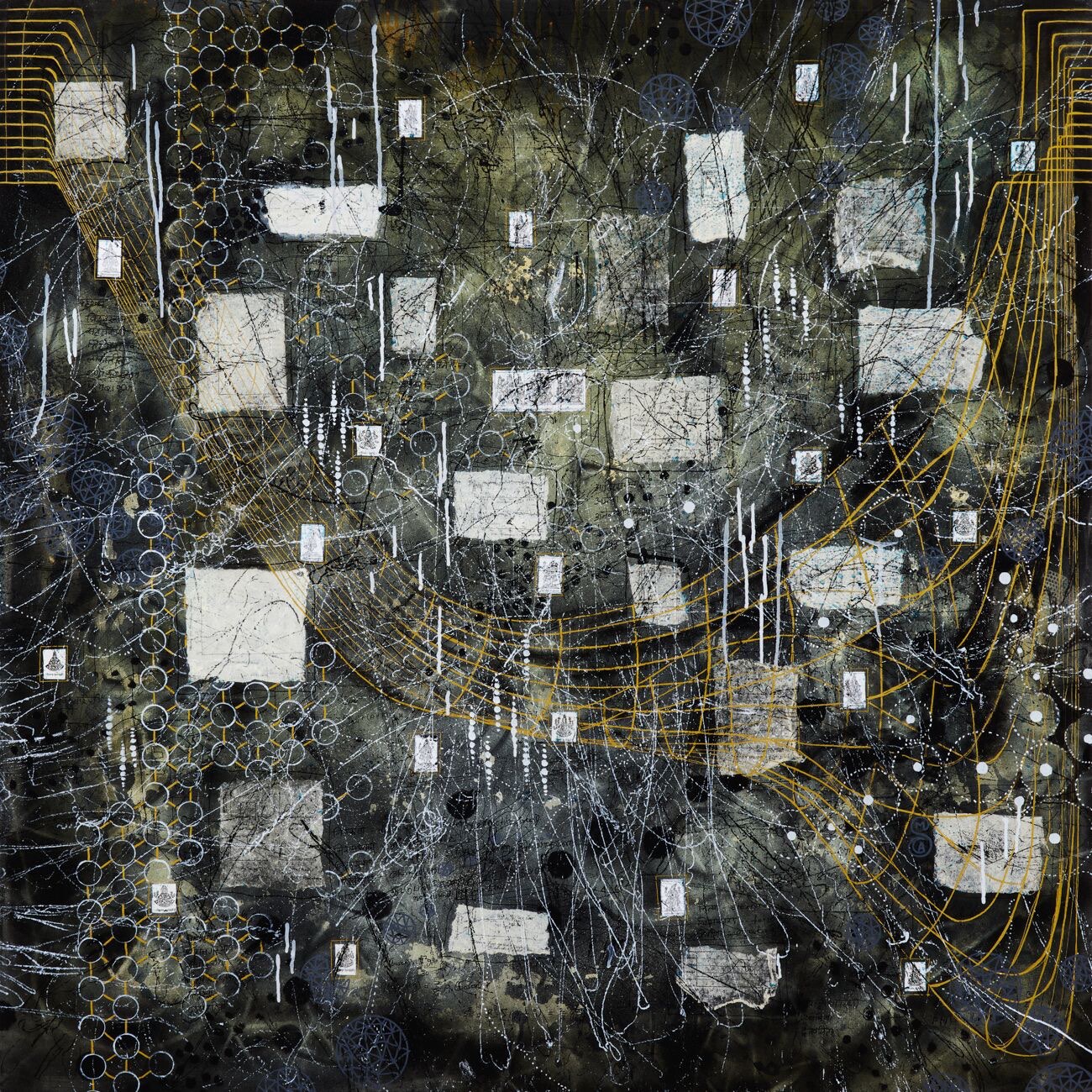 This print is a montage of 12 smaller prints made from zinc-plate etchings. Each contains a certain view of the quantum world that was inspired by the results from particle accelerators and other experiments. 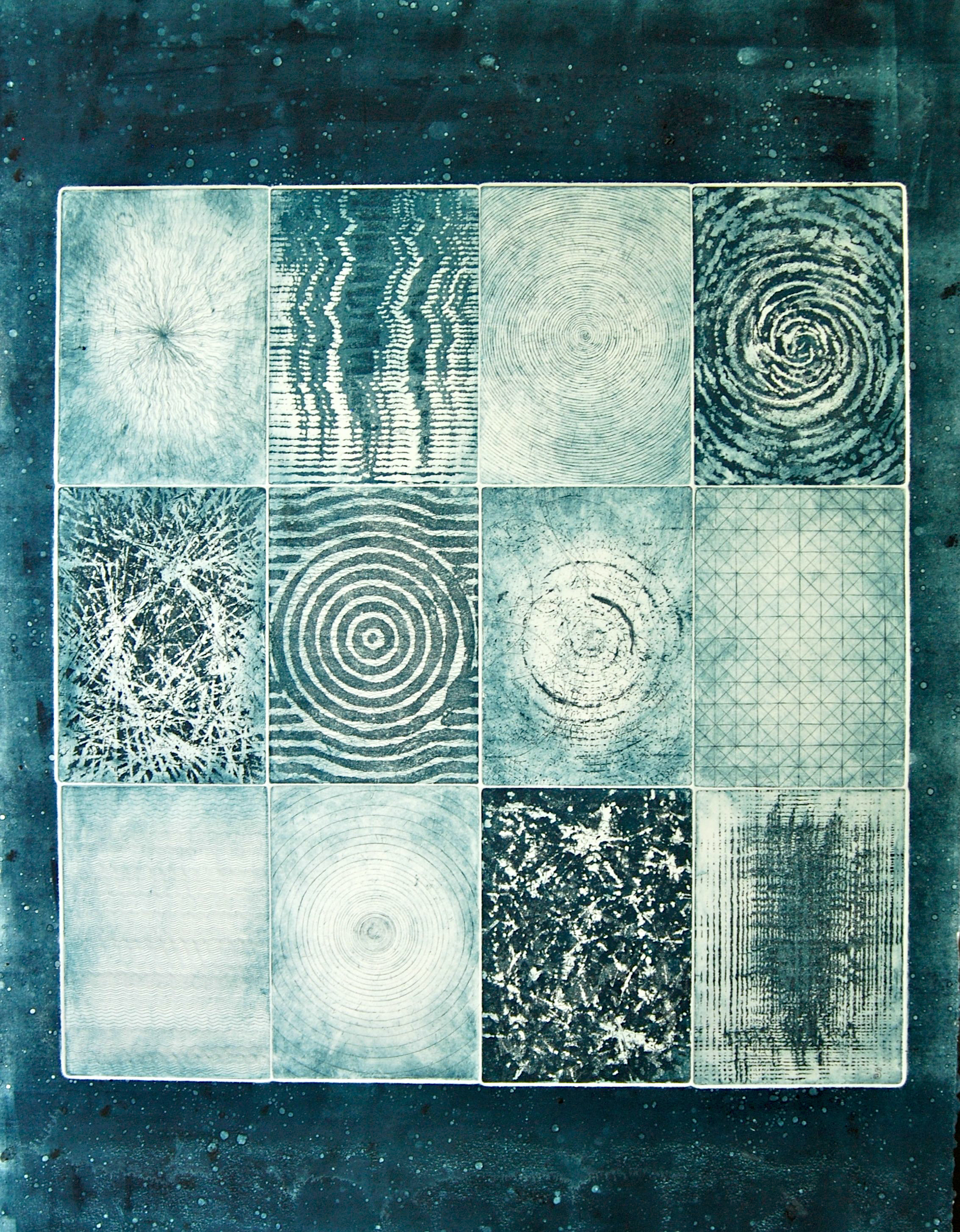 This pen and ink drawing is layered with freehand and stenciled shapes. The central concentric circles were made by repeatedly drawing curves using a French curve template and represent the inflationary state after the Big Bang. The lace-like layer signifies the creation of the particles and atoms, which coalesced and eventually lead to the formation of stars, galaxies, and galaxy clusters in our universe. 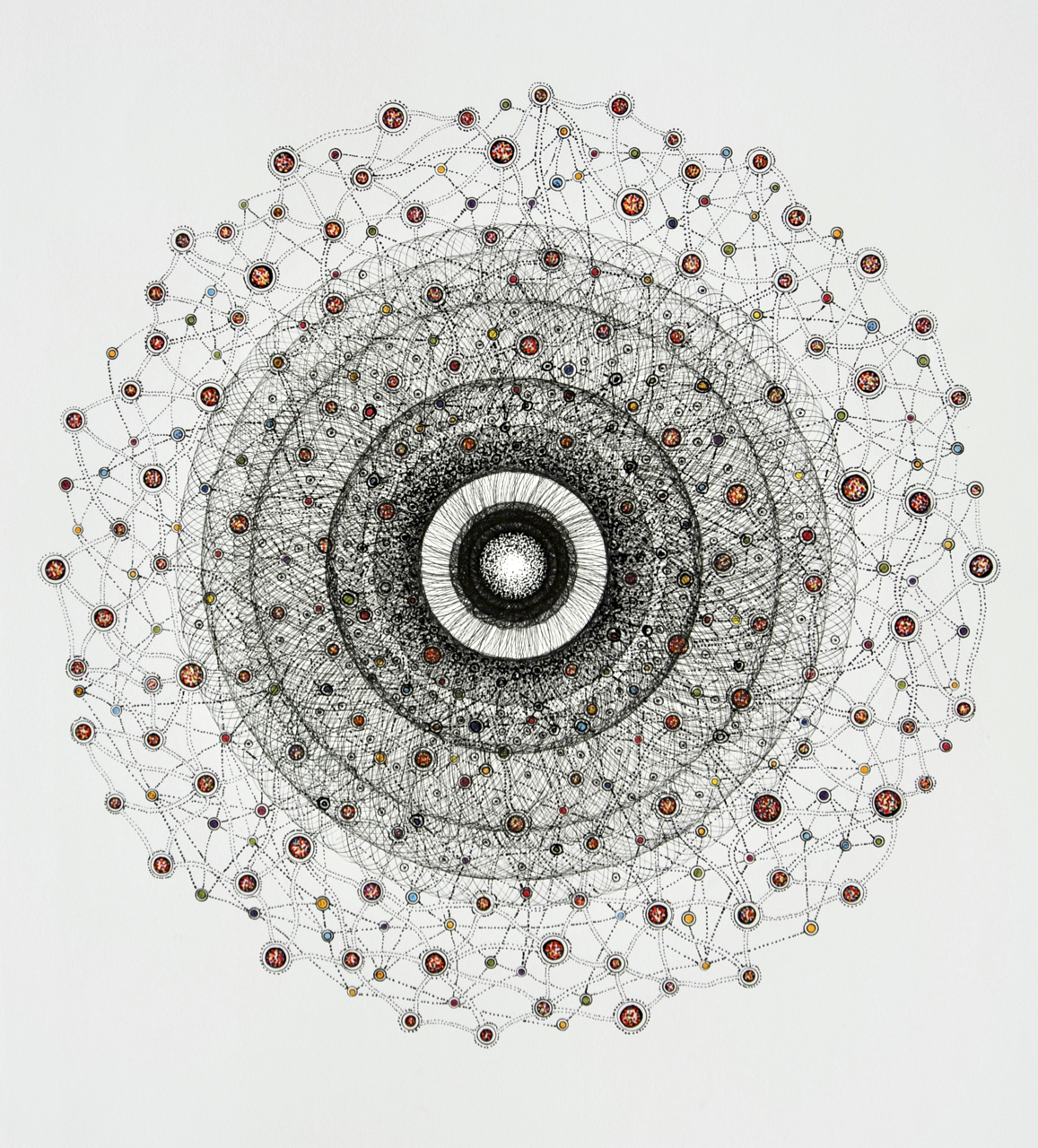 My fascination for graphs that tend to go to zero or infinity led to this piece. I would visualize a line going on forever without reaching zero, and then taking off to another dimension. This is a three-dimensional piece made of thread. As I worked on the model, the process led me to new questions involving the nature of entanglement. 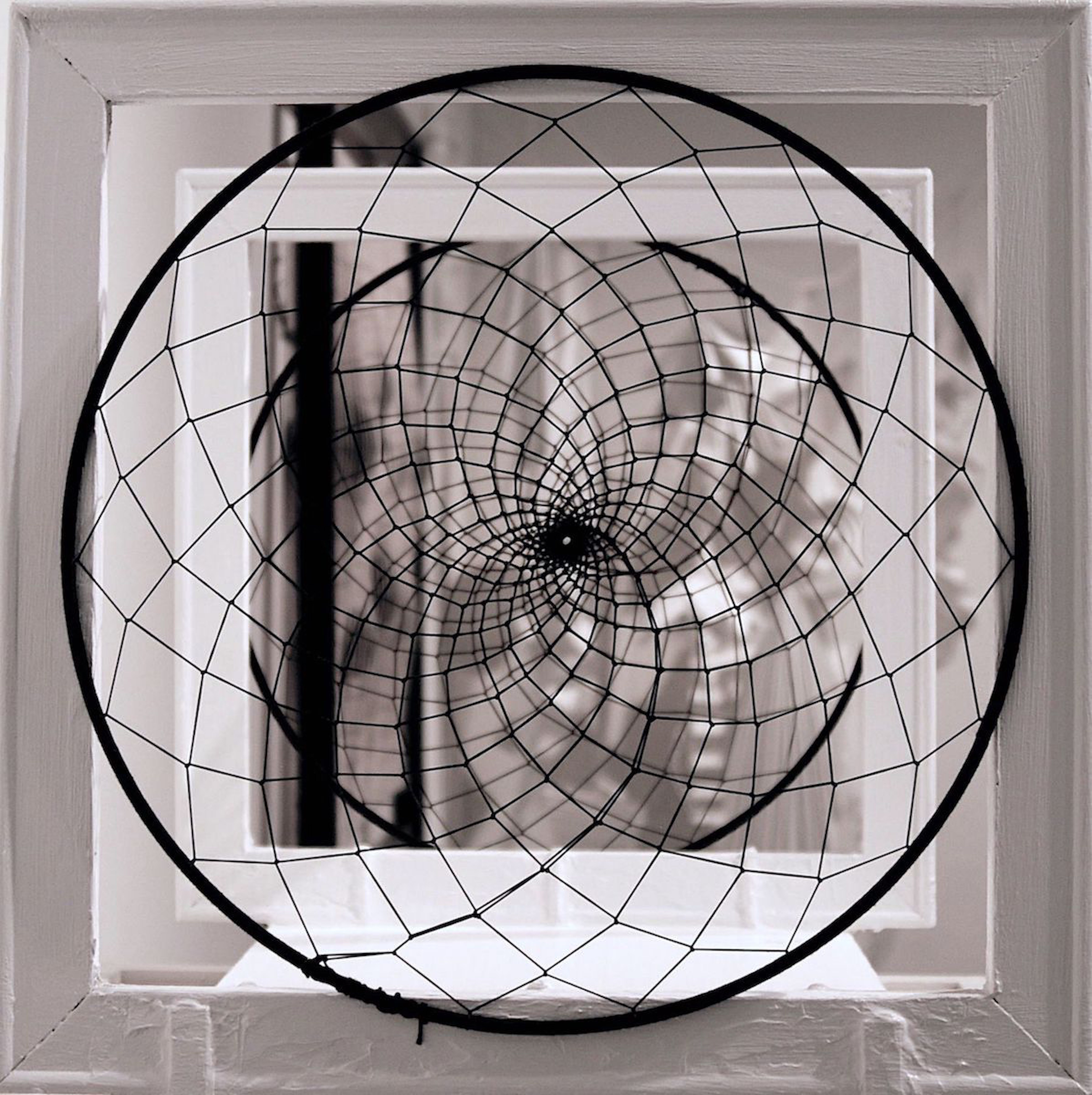 Neutrinos are difficult to detect, as these tiny, neutral particles can pass easily through objects without interacting. I would sometimes imagine myself as a neutrino, racing through the cosmos at speeds close to that of light, wondering where I came from and where I am headed. The result was this ink drawing. 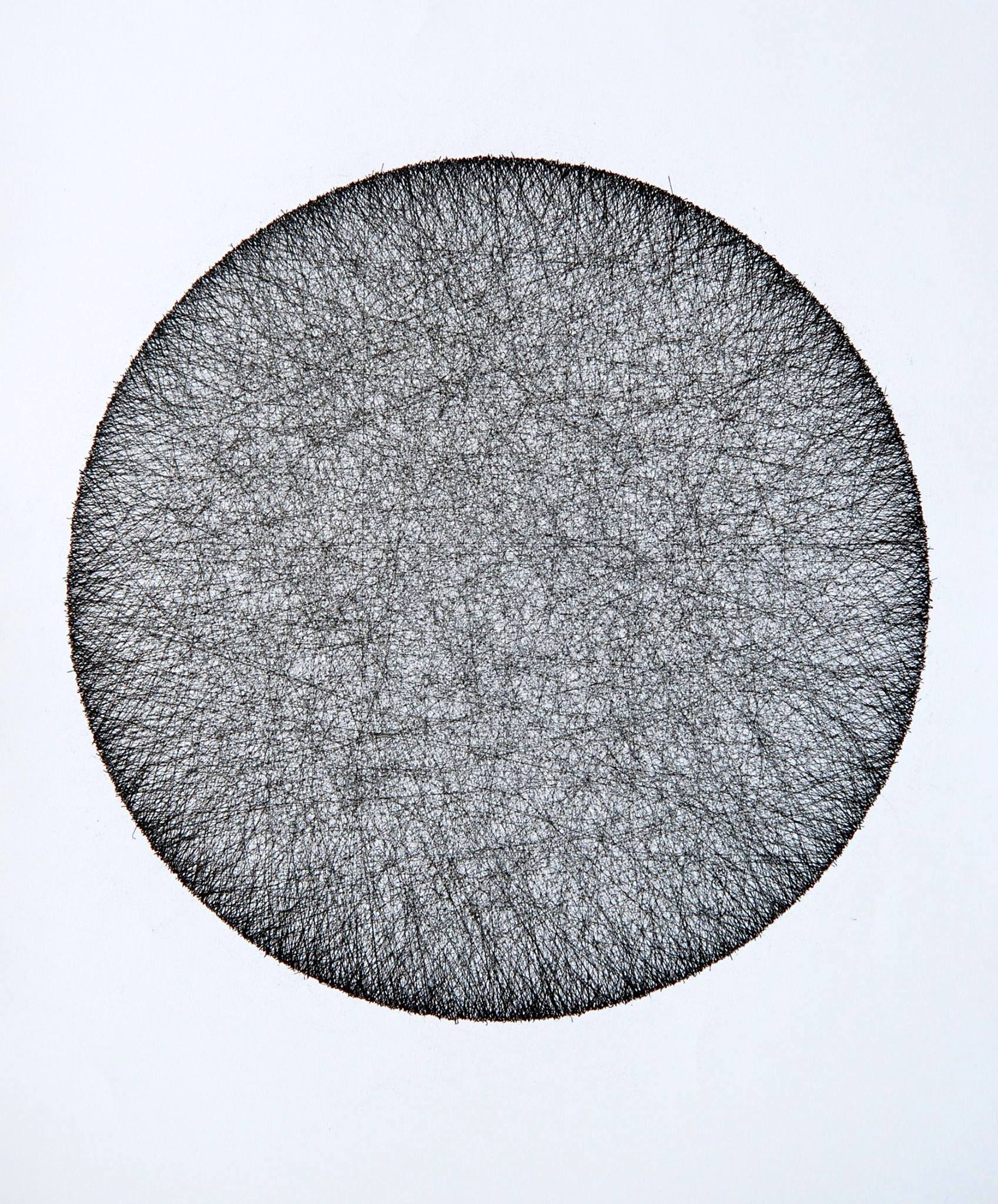 My deep interest in cosmology led to this series of drawings on handmade paper. These pieces are an exploration into concepts that range from the microcosm to the macrocosm, from quantum mechanics to relativity and from singularity to infinity. Such dichotomies are part of a whole, and it is the limitations of our perception that create the borders by separating and categorizing them. 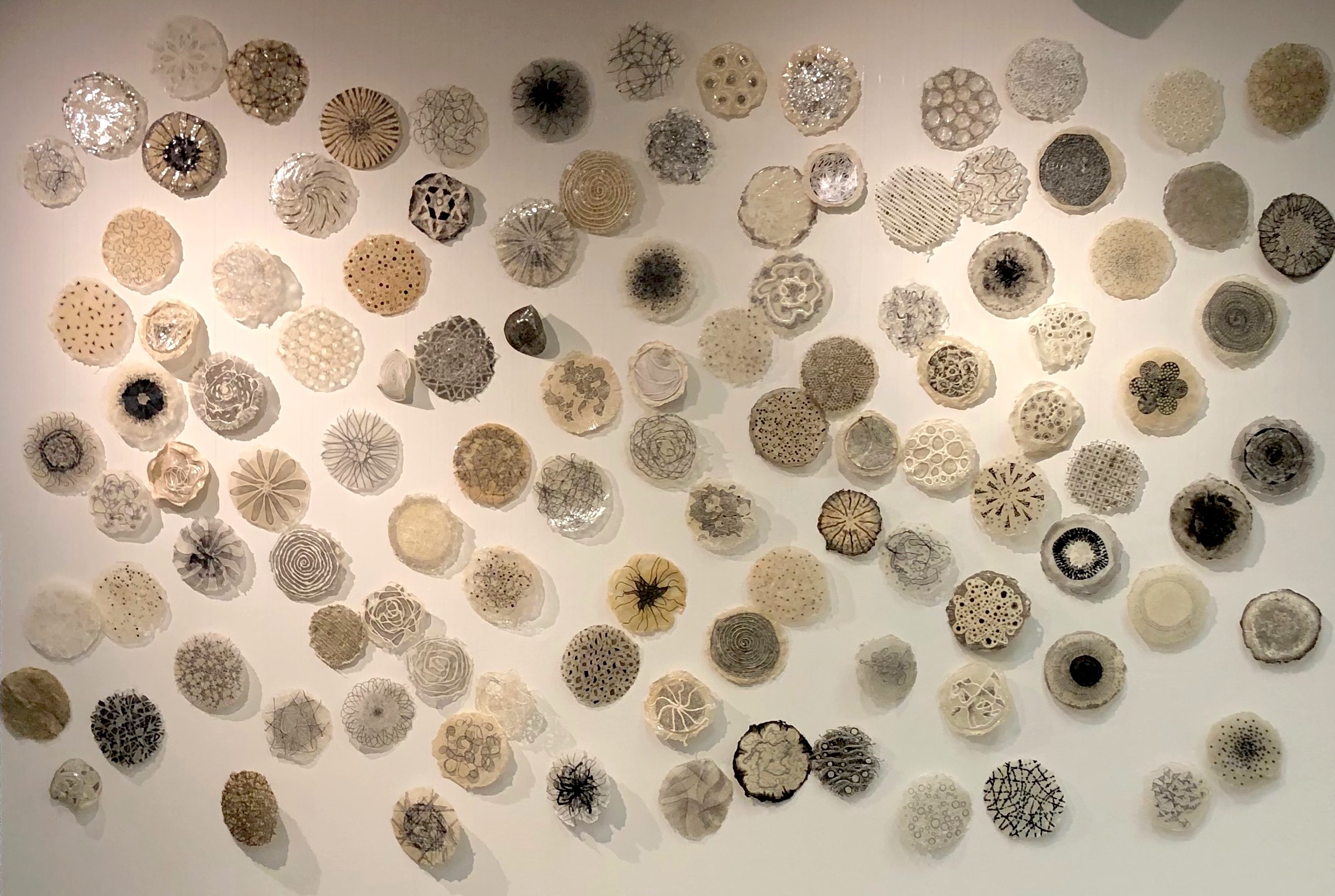 Shanthi Chandrasekar
Follow
Use your browser’s print dialog box to create a pdf.