Our understanding of the universe is about to change.

For the past few decades, physicists have been able to describe with increasing detail the fundamental particles that make up the universe and the interactions at work between them. This understanding is encapsulated in what is known as the Standard Model of particle physics.

However, physicists know that their understanding is incomplete. Finding out what needs to be added requires experimental data, and the next big step in directly seeing what lies beyond the Standard Model is the Large Hadron Collider (LHC), starting up in 2007 at CERN, the European particle physics laboratory on the Franco-Swiss border near Geneva. 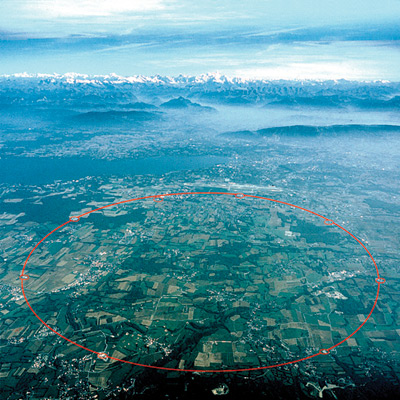 Physicists are excited by the LHC. It will be the world's most powerful particle accelerator, colliding protons into each other at an energy of 14 TeV (tera-electronvolts), giving access to physics at an energy scale about ten times higher than has been open to exploration so far. Each collision of protons, as they travel in opposite directions around a 27-kilometer-circumference ring deep underground, will reveal more information about the most fundamental parts of the universe.

Physicists think that crucial missing parts of our model of the universe will be revealed through the LHC's nearly-billion proton collisions per second. For example, the process that gives mass to particles should become clear. This process might announce itself through the production of one or more types of so-called Higgs particles, and a major theme for the LHC is to search for and study them.

A Higgs particle must exist if the Standard Model is to remain the best theory of particles at the energy scale that the LHC can explore. Either the Higgs will be discovered, leading to a better understanding of the Standard Model, or the Higgs won't appear in the way that physicists expect, and something possibly even more interesting will emerge.

A glimpse of a more exotic universe?

The LHC should also reveal new physics beyond the Standard Model, like supersymmetry or extra dimensions of space. Supersymmetry could provide a way to unify the electromagnetic, weak, and strong forces but it also predicts a range of so-far-unobserved particles. The lightest of these supersymmetric particles might also be a major part of the cosmic dark matter we know exists but can't yet characterize.

Extra dimensions of space might provide a different route to physics beyond the Standard Model. They would be invisible to us in everyday life, much as a third dimension would be beyond the experience of an ant crawling on a flat sheet of paper. But if extra dimensions exist, they could produce measurable effects in the LHC. This could allow the LHC to enter the domain of quantum gravity, contributing to the long-sought reconciliation of quantum mechanics and general relativity.

The LHC is a machine of superlatives. It is the world's largest superconducting installation. It is colder than outer space. It contains a vacuum more perfect than anywhere between the Earth and the space station. It will produce close to a billion proton-proton collisions per second. All this makes it not only a machine for frontier physics, but also a machine for frontier technology.

Housed in a 27-km-long circular tunnel, the LHC is a true giant. It is the most complex scientific instrument ever constructed. At its heart are extremely efficient superconducting magnets based on coils made from niobium-titanium wire that conducts electricity without resistance at low temperature. The LHC magnets will operate at 1.9 degrees above absolute zero (about -271°C), cooled by superfluid helium.

Each magnet has a two-in-one design to guide both beams in a single structure. The LHC uses 1232 dipole magnets to guide the beam, together with around 400 quadrupole magnets to focus the beams, and a few thousand additional magnets to fine-tune the orbits. Altogether, they use enough superconducting filament to stretch to the Sun and back five times, with enough left over for a few trips to the moon.

The high intensity of the LHC beams, which gives rise to the enormous collision rate, poses its own challenges. For example, at full intensity each beam carries about the same amount of energy as a speeding TGV train. This is 200 times more than the highest stored energies achieved in any previous accelerator.

The LHC is about 100 meters underground, unnoticeable from the surface except for the buildings above shafts that drop down to the ring, some of which lead to the experimental caverns that contain the particle detectors that will capture the results of the LHC's particle collisions.

Four major experiments, ALICE, ATLAS, CMS, and LHCb are preparing for physics at the LHC. Two much smaller experiments, TOTEM and LHCf, have also been approved, and other proposals are on the table. ATLAS and CMS are general purpose detectors, designed to see anything that the LHC will reveal. Each surrounds a point at which protons collide, and measures the energies and trajectories of the emerging particles. Each has been prepared by a collaboration of around 2000 researchers from around the world; a prime example of different cultures working towards a common goal. Top of the priority list for discovery in these detectors are Higgs particles and supersymmetry. ALICE and LHCb are smaller experiments, each focusing on one particular line of research. ALICE will study matter as it was in the first instants of the universe in an attempt to understand how it evolved into matter as we know it today. LHCb will focus on nature's preference for matter over antimatter.

Each time protons collide inside a particle detector, hundreds or thousands of particles will emerge. Since there will be up to a billion collisions per second, this adds up to an enormous amount of data. Powerful electronic systems will select the interesting collisions, reject those that are uninteresting, and record the remaining data. Even after rigorous selection, the volume of data to be recorded by each experiment would fill a stack of CD-ROMs 20 km tall every year.

Conceived in the 1980s, approved in the 1990s, and scheduled to start up in 2007, the LHC is a huge investment and a long-term project. In its first phase of operation it is set to illuminate a vast new terrain of physics for exploration, and set a course for the future. What new facilities the future will bring remains to be seen, but the LHC will operate for at least a decade at the forefront of science. Beyond that, the LHC could itself become part of the future landscape, through upgrades to more collisions or higher energy.

What will be seen at the LHC is not yet known, but whatever it is will open a new world of discovery as we seek understanding of the fundamental nature of our universe.