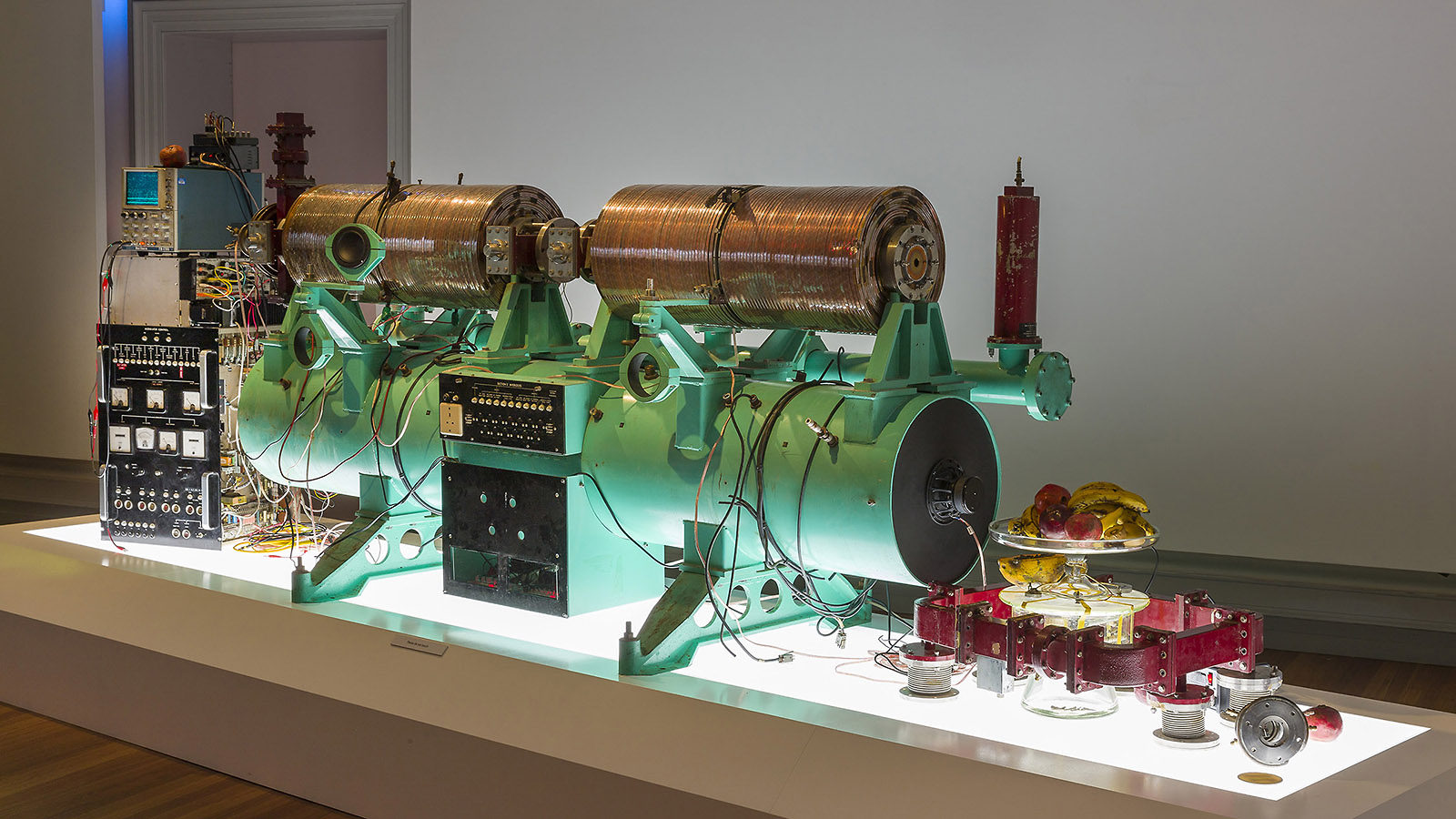 Artist Chris Henschke has spent more than a decade exploring the intersection of art and physics. His pieces bring invisible properties and theoretical concepts to light through still images, sound and video.

His latest piece, called “Song of the Phenomena,” gives new life to a retired piece of equipment once used by a long-time collaborator of Henschke, University of Melbourne and Australian Synchrotron physicist Mark Boland.

The story of “Song of the Phenomena” begins in the 1990s. In 1991, Henschke enrolled in the University of Melbourne to study science, but he turned to sound design instead. Boland entered the same university to study physics.

Personal computers were just entering the market. Sound designers and animators began coding basic programs, and Henschke joined in. “I was always interested in making sounds and music, interested in light and art and physics and nature and how it all combines—either in our heads or the devices that mediate between us and nature,” he says.

Boland completed his thesis in physics at the Australian Radiation Laboratory (now called the Australian Radiation Protection and Nuclear Safety Agency). He was testing a new type of electron detector in a linear accelerator, or linac. The linac used radio waves to guide electrons through a series of accelerator cavities, which imparted more and more energy to the particles as they moved through.

That particular linac spent more than 20 years with the Australian Radiation Protection and Nuclear Safety Agency, where medical physics professionals used it to accelerate electrons to different energies to create calibration standards for radiation oncology treatments. Once they no longer needed it, Boland’s former advisor contacted him to ask if he’d like the accelerator or any of its still-working parts. He said yes, though he was unsure what he would do with it.

In 2007 Henschke came to the Australian Synchrotron as part of an artist-in-residence program. Boland was familiar with his artwork; he had seen Henschke’s first piece exploring particle physics in the pages of Symmetry. Boland grew up with an appreciation for art; he says his parents made sure of that by “dragging” him through many galleries in his youth.

When Henschke and Boland met, they got into an hours-long conversation about physics. “We hit it off, we resonated,” Boland says, “and we’ve been working together ever since.”

Since that first residency program, Henschke has spent significant time at the Australian Synchrotron facility and at CERN European research center and has taken shorter trips to the DESY German national research center.

His process of creating artwork echoes the scientific process and the setup of an experiment, Boland says. Henschke thinks through the role that each piece of the artwork plays. Everything is where it is for a reason.

“He’s a perfectionist, he doesn't settle for second best,” Boland says. “He has the same level of professionalism and tenacity as an artist as a physicist does. It’s as if there’s a five-sigma quality test on his work as well.”

Song of the Phenomena

Boland mentioned the linac he had to Henschke during a conversation in early 2016. “Chris ran with it,” Boland says. “He took it and made it into his installation.”

Henschke discovered the machine hums at 220 hertz—the musical note of A—as it produces its resonant waves. “In a sense, particle accelerators are gigantic, high-energy synthesizers because they are creating high-energy waves at very specific frequencies and amplitudes,” Henschke says.

Finally it dawned on him; the art could be an echo of the accelerator’s past.

The accelerator no longer accelerates electrons. Instead Henschke feeds it a steady supply of electrons and their antimatter partners, positrons. He does this by placing it beside a pile of bananas, which release the particles as their potassium decays. (Using decaying fruit was a nod to Dutch still-life vanitas paintings, Henschke says.)

Observers cannot see the electrons and positrons in the piece, but they can hear them. Henschke ensured this by adding a Geiger counter, which emits a chirp each time it detects a particle.

Visitors can also hear the accelerator itself. Henschke attached speakers and pumped up the sound of the machine’s natural hum with a stereo amp (a bit too much at first; they blew up an oscilloscope they were using to measure the frequency). He used an AM radio coil to amplify the sound of the accelerator’s electromagnetic field.

“Song of the Phenomena” plays upon resonance, amplification and decay, Henschke says. “It creates this tension between the constant hum of the device versus the unpredictability of the subatomic emission.”

The idea of playing with the analogy between the linac’s resonance and sound resonance is one that Australian Synchrotron Director Andrew Peele appreciates. “A lot of science communication is about how you find analogies that people can engage with, and this is a great example,” Peele says.

Henschke displayed “Song of the Phenomena” at the Royal Melbourne Institute of Technology Gallery from November 17, 2016, to February 18, 2017. Since then, the apparatus has returned to the Australian Synchrotron, where it sits in a vast, open room where some of the facility’s synchrotron beamline stations used to stand. Scientists meet nearby for a weekly social coffee break.

Henschke is currently writing his thesis for his PhD in experimental art (with Boland as his advisor). In his next project, he hopes to tackle the subject of quantum entanglement.