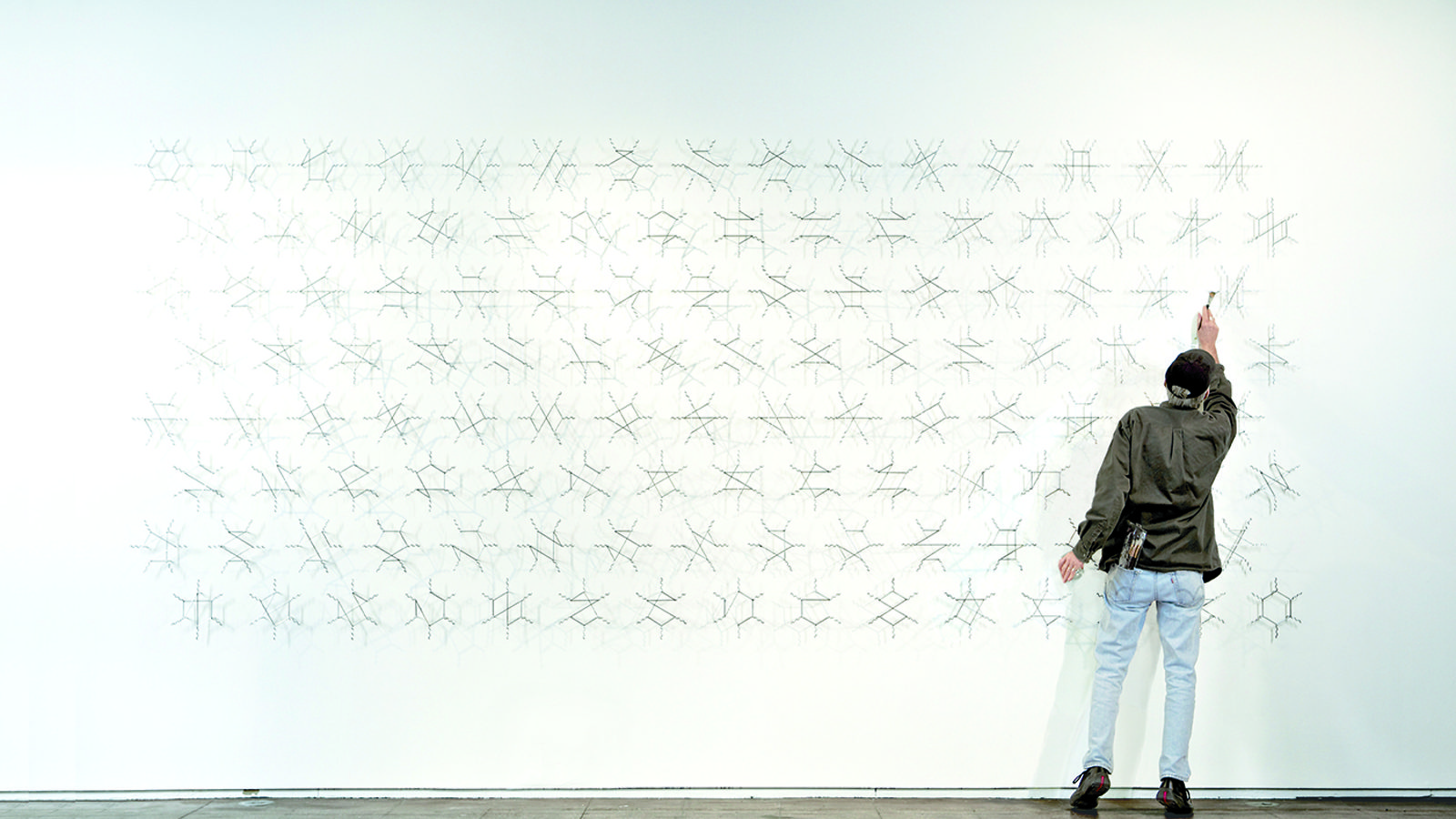 If you ask a physicist how particles interact and you have a drawing surface handy, the explanation will likely come in the form of a series of lines, arrows, squiggles and loops.

These drawings, called Feynman diagrams, help organize a calculation. They represent the mathematical formulas of how particles interact, beginning to end, and also the rate at which the interaction happens.

A new exhibit at Fermi National Accelerator Laboratory examines the beauty and simplicity of this shorthand.

“For all of us, experimentalists and theorists alike, the way we think about things really is embedded in Feynman diagrams,” says Chris Quigg, a Fermilab theoretical physicist. “They’re wonderful shorthand for getting to the essence of what’s going on.”

“The Cognitive Art of Feynman Diagrams” by Edward Tufte celebrates the work of Richard Feynman, the Nobel Prize-winning physicist who developed the eponymous diagrams. Tufte is a Yale professor, statistician and artist who has written four books on analytical design. In his search for the effective data visualizations, Tufte was inspired by Feynman's book QED: The Strange Theory of Light and Matter.

“Feynman diagrams are among the most important and best information visualizations ever made,” Tufte says. “They replace some hairy math, visualize nature at extremely small scales and have direct empirical relevance.”

Someone unfamiliar with the concept of quantum uncertainty might, for example, appreciate its visual representation in the piece “All Possible Photons” (pictured above). It depicts in Feynman diagrams the 120 possible outcomes of a meeting of six discrete units of light.

The steel wire sculptures are mounted inches from a wall and illuminated with light sources of varying qualities to create a three-dimensional appearance. The piece is composed of both the sculptures and the shadows they create. Tufte debuted a similar exhibit in New York City in 2012.

The 120 diagrams Tufte used are derived from an academic paper published 20 years ago titled “One Loop Multiphoton Helicity Amplitudes” by Greg Mahlon, who began the project as a doctoral student at Cornell University. Mahlon, who published the paper while he was a postdoc at Fermilab and now works as an associate professor of physics at the Mont Alto Campus of the Pennsylvania State University, appreciates Tufte’s aesthetic interpretation.

The immaterial shadows cast by the steel sculptures truly reflect the action at the subatomic scale, Quigg says. “We draw straight lines representing electrons, but our minds see each line with the frothiness of quantum theory’s uncertainties and probabilities.”

In addition to the sculptures, the exhibit features two diagram-decorated vehicles: one a yellow and tan Dodge van once driven by Feynman himself and the other an Airstream trailer dubbed the “Airstream Interplanetary Explorer.”

Fermilab will host “The Cognitive Art of Feynman Diagrams” from April 12 to June 26. Public tours will be offered every Wednesday and every other Saturday between April 26 and June 21.