Fermilab Today published this story on Nov. 29, 2011. For more information about the workshop follow the hashtag #intensityfrontier. 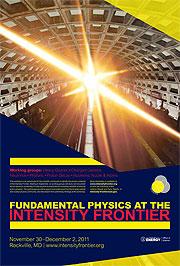 At the Intensity Frontier, scientists use high energy beams and sensitive particle detectors to explore rare subatomic processes in search of answers to profound questions. More than 500 scientists are gathering this week to discuss the future role of the U.S. in these experiments. They will discuss the most exciting opportunities, the potential for new discoveries and the equipment and technology required for these new experiments.

The workshop, named “Fundamental Physics at the Intensity Frontier” and held from Nov. 30 to Dec. 2 near Washington, D.C., is split into six working groups. Speakers from each group will provide an overview of their study area and its future goals to an audience spanning the breadth of the physics community. Then medium-sized groups will break away for debates and discussions designed to stimulate open conversations.

“This will be a good opportunity for people in more specialized areas to interact and learn from each other and hopefully reinforce each other’s case for this physics,” said Jack Ritchie, a co-convener for the Heavy Quarks group and professor in the physics department at the University of Texas, Austin.

In recent years, the Intensity Frontier has become a top priority for fields like nuclear physics, according to Michael Ramsey-Musolf, a physics professor at the University of Wisconsin at Madison and a co-convener for the Nucleons, Nuclei and Atoms group.

“There’s a lot of synergy between high-energy physics, nuclear physics and cosmology and they all meet at the Intensity Frontier field,” he said.

The workshop also brings together scientists from similar research areas, such as muon physicists from experiments like Muon g-2, Mu2e and the proposed Long-Baseline Neutrino Experiment, according to David Hertzog, a University of Washington physics professor and member of the Charged Leptons group.

“This community is scattered all over the planet,” he said. “In any one snapshot you don’t have everybody in the same room like this.”

While the DOE’s Office of Science will use the event to evaluate the science opportunities for the U.S. particle physics community in this field, the workshop will also be a learning experience for those new to the Intensity Frontier.

“It will be very good for me to learn more about what the physics goals are,” said Gerben Stavenga, a postdoctoral fellow researching theoretical physics and a speaker for the Proton Decay group. “We’re looking forward to what the Intensity Frontier will bring us.”

From graduate students to Fermilab physicists and DOE staff, the community in attendance will comprise a large spectrum of physics professionals. The working groups have spent months preparing for the workshop.

“It’s going to be a big crowd of people and a wide range of physics to cover,” said Rouven Essig, an assistant professor from Stony Brook University and co-convener for the Hidden Sector Photons, Axions, and WISPs group. “Many eyes are on the workshop and it will have an important impact on the future direction of this field.”