The physics of Scotch tape

Scotch tape won’t fix a broken bone, but it might be able to tell you that the bone is broken. Tim Koeth, featured in the August 2010 edition of symmetry, is working to figure out how this humble office supply creates X-rays as it unrolls and what you could do with them.

Koeth, a physicist at University of Maryland, is following up on work by UCLA physicist Seth Putterman, who found in 2008 that Scotch tape emits X-rays as it is unspooled inside a vacuum. 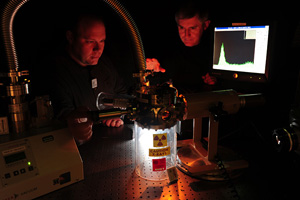 Tim Koeth (left) and Pat O'Shea conducting their tape experiment at the University of Maryland. (Photo courtesy of Tim Koeth).

In Putterman’s experiment, the X-ray intensity was strong enough to allow the UCLA researchers to X-ray a finger. If the mechanism could be determined, this discovery could lead to a cheap, portable X-ray machine that could run without electricity – an invaluable tool for field workers in remote areas or military physicians and emergency responders.

Koeth was fascinated.  “I just had to try it for myself,” he said.

So he and his department head, physicist Patrick O’Shea, cobbled together a tape experiment of their own. In a corner of the lab near where they work on UMD’s Electron Ring, they built a vacuum chamber to house a roll of tape, a phosphorescent material that glows when electrons hit it, and an X-ray detector, all with bits and pieces they found lying around the lab. Koeth placed this key between the tape and a phosphor screen to create a shadow. Image courtesy of Tim Koeth.

“Those are the best kind of experiments,” O’Shea said.

Koeth was curious about the X-rays’ source. While heavy metals such as tungsten often emit X-rays when hit by fast moving electrons, he was surprised that something as simple as tape’s adhesive could produce them. The answer, he thought, might have to do with some sticky physics in which the ripping of the tape creates a strong electric field.

To illustrate this, Koeth suggests a simple experiment: Sprinkle glitter on your desk; unspool a roll of Scotch tape over it; and watch as an electrical field is formed and sucks up the sparkles. But don’t worry; you’re not creating X-rays on your desk. Electrons need to be accelerated to least 10 keV to produce penetrating X-rays, and air molecules slow them down long before they reach this energy.

In a vacuum, however, the electrons don’t stop until they slam into a solid surface and emit a burst of X-rays, a phenomenon called bremsstrahlung, or "breaking radiation" in German. When the researchers unspooled the tape inside the vacuum chamber, the green glow from the phosphorescent material told them that a large number of electrons were hitting it. The key placed below the tape but above the phospor screen blocked the electrons and cast a shadow. Image courtesy of Tim Koeth.

To study whether these electrons were strong enough to create X-rays, the researchers added a screen with a negative voltage of 10 keV. The electrons accelerated by the tape’s unspooling were able to fight their way through the screen to the phosphorescent material.

Koeth and O’Shea have no shortage of ideas for future projects: determining whether they could increase the accelerating voltage of the field, studying the properties of the tape’s adhesive, taking some real X-ray images, and integrating the components of the experiment into a usable machine.

If the vacuum component could be made portable, a self-contained X-ray machine would be an example of what O’Shea calls “culturally-competent engineering,” creating technological solutions without the use of fancy materials for use in remote parts of the world. Yet he and Koeth find the physics of tape just as fascinating as their potential applications.

“Even though friction is an everyday force, many of its details are not well understood. We like to explore things that aren’t well understood,” O’Shea said. “If we increase our knowledge of the universe, we often find useful applications. When Faraday began his experiments on electricity, he wasn’t sure what the practical application might be, however, he and others have quite a few since.”