Update about Tevatron shutdown and future plans for Fermilab

Today's issue of Fermilab Today includes more details from Director Pier Oddone about the decision to shut down the Tevatron in 2011 and a description of future plans for the laboratory.

Yesterday we received the news that we will not receive funding for the proposed Tevatron extension and consequently the Tevatron will close at the end of FY2011 as was previously planned. 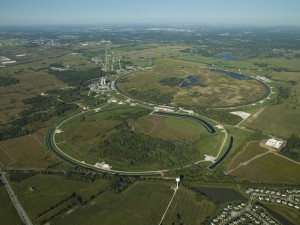 Yesterday, Jan. 10, Fermilab Director Pier Oddone announced that the Tevatron will shut down as planned in the end of September 2011.

The present budgetary climate did not permit the DOE to secure the additional funds needed to run the Tevatron for three more years as recommended by the High Energy Physics Advisory Panel. Both Tevatron collaborations did a splendid job articulating the physics case and all the relevant issues to both our Physics Advisory Committee and the national advisory committees, which led to the recommendation to extend the Tevatron. We plan to extract every bit of physics we can from this final Tevatron running period. The Tevatron has already exceeded all expectations, and given the large datasets we will continue to find new results and discoveries in the Tevatron data for years to come. The life of this legendary machine has been marked by historic discoveries made possible by its innovative accelerator and detector technologies. The experience gained during its operation has also immensely helped the development of the LHC accelerator and detectors. Fermilab is and will remain a very strong part of the LHC program and will continue to pursue physics at the high-energy frontier together with our collaborators at CERN.

As you can imagine I have answered many questions from the press over the last 24 hours. They are interested in the future of Fermilab, what may happen with jobs on our site and whether or not there will be any layoffs. There are about 100 jobs connected with the operations and maintenance of the colliding beam program. At this point the situation is very fluid because we do not have all the information we need to make decisions. In particular:

a) We do not know the budget for FY11 since we are in a Continuing Resolution and Congress has not acted on any of the appropriations bills.

b) We do not know the President's budget request for the following year, FY12. We will know this only in mid February.

When the Tevatron concludes operations, we plan to move as many employees as possible to jobs on several new experiments and projects, many of which are already well underway and in need of extra help. Of course, this depends on the budget for FY11 and FY12 and on how fast the new projects ramp up. It will be a complex transition for the laboratory, and soon we will set up a Q&A website to answer questions about the issues that this transition entails.

The Office of Science and Fermilab are committed to maintaining our laboratory as a world leader for particle physics research. We have the Office of Science's strong support to develop into the foremost laboratory at the Intensity Frontier with new neutrino experiments NOvA, MicroBooNE and the Long Baseline Neutrino Experiment (LBNE); the muon-to-electron conversion experiment (Mu2e); and ongoing experiments MINOS, MINERvA and MiniBooNE. Underlying our Intensity Frontier program we have the Office of Science’s support for the development of Project X. In addition we have leading programs at the Cosmic Frontier with the Dark Energy Survey, the dark-matter experiments CDMS and COUPP, and Pierre Auger. While we would have liked to run the Tevatron for three more years, our life going forward is full of promising projects and great opportunities for major discoveries.