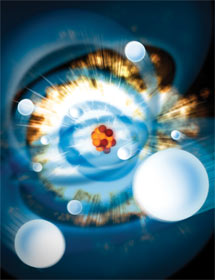 The world's first hard X-ray free-electron laser started operation with a bang. First experiments at SLAC National Accelerator Laboratory's Linac Coherent Light Source stripped electrons one by one from neon atoms (illustrated above) and nitrogen molecules, in some cases removing only the innermost electrons to create "hollow atoms." Understanding how the machine's ultra-bright X-ray pulses interact with matter will be critical for making clear, atomic-scale images of biological molecules and movies of chemical processes. (Image: SLAC InfoMedia Solutions.)

In the March/April 08 issue of symmetry we introduced SLAC's Linac Coherent Light Source, a first-of-its-kind machine that would probe matter at the atomic scale with ultra-fast, ultra-bright pulses of X-ray laser light.  Now the first scientific results have been published, from early experiments aimed at understanding how these powerful pulses interact with matter in its simplest forms -- individual atoms and molecules of nitrogen gas, which contain two atoms each.  Here's the text of the SLAC press release, plus links to stories in Wired and Nature.   And yes, we're stealing respectfully appropriating Nature's headline, because it's awesome.

Menlo Park, Calif.—The first published scientific results from the world's most powerful hard X-ray laser, located at the Department of Energy's SLAC National Accelerator Laboratory, show its unique ability to control the behaviors of individual electrons within simple atoms and molecules by stripping them away, one by one—in some cases creating hollow atoms.

These early results—one published today, the other last week—describe in great detail how the Linac Coherent Light Source's intense pulses of X-ray light change the very atoms and molecules they are designed to image. Controlling those changes will be critical to achieving the atomic-scale images of biological molecules and movies of chemical processes that the LCLS is designed to produce.

In a report published in the July 1 issue of Nature, a team led by Argonne National Laboratory physicist Linda Young describes how they were able to tune LCLS pulses to selectively strip electrons, one by one, from atoms of neon gas. By varying the photon energies of the pulses, they could do it from the outside in or—a more difficult task—from the inside out, creating so-called "hollow atoms."

"Until very recently, few believed that a free-electron X-ray laser was even possible in principle, let alone capable of being used with this precision," said William Brinkman, director of DOE's Office of Science. "That's what makes these results so exciting."

Young, who led the first experiments in October with collaborators from SLAC and five other institutions, said, "No one has ever had access to X-rays of this intensity, so the way in which ultra-intense X-rays interact with matter was completely unknown. It was important to establish these basic interaction mechanisms."

SLAC's Joachim Stöhr, director of the LCLS, said, "When we thought of the first experiments with LCLS ten years ago, we envisioned that the LCLS beam may actually be powerful enough to create hollow atoms, but at that time it was only a dream. The dream has now become reality."

In another report, published June 22 in Physical Review Letters, a team led by physicist Nora Berrah of Western Michigan University—the third group to conduct experiments at the LCLS—describes the first experiments on molecules. Her group also created hollow atoms, in this case within molecules of nitrogen gas, and found surprising differences in the way short and long laser pulses of exactly the same energies stripped and damaged the nitrogen molecules.

"We just introduced molecules into the chamber and looked at what was coming out there, and we found surprising new science," said Matthias Hoener, a postdoctoral researcher in Berrah's group at WMU and visiting scientist at Lawrence Berkeley National Laboratory who was first author of the paper. "Now we know that by reducing the pulse length, the interaction with the molecule becomes less violent. "

While the first experiments were designed to see what the LCLS can do and how its ultra-fast, ultra-bright pulses interact with atoms and molecules, they also pave the way for more complex experiments to come. Its unique capabilities make the LCLS a powerful tool for research in a wide range of fields, including physics, chemistry, biology, materials and energy sciences.

The LCLS forms images by scattering X-ray light off an atom, molecule or larger sample of material. Yet when the LCLS X-rays are tightly focused by mirrors, each powerful laser pulse destroys any sample it hits. Since certain types of damage, like the melting of a solid, are not instantaneous and only develop with time, the trick is to minimize the damage during the pulse itself and record the X-ray snapshot with a camera before the sample disintegrates.

Both teams found that the shorter the laser pulse, the fewer electrons are stripped away from the atom or molecule and the less damage is done. And both delved into the detailed mechanisms behind that damage.

Since they're closest to the positively charged nucleus, the two innermost electrons are generally the hardest to wrest away. But they also most readily absorb photons of X-ray light, and so are the most vulnerable to getting stripped away by intense X-rays.

"This transparency associated with hollow atoms could be a useful property for future imaging experiments, because it decreases the fraction of photons doing damage and allows a higher percentage of photons to scatter off the atom and create the image," Young said. She said application of this phenomenon will also allow researchers to control how deeply an intense X-ray pulse penetrates into a sample.

Berrah's team bombarded puffs of nitrogen gas with laser pulses that ranged in duration from about four femtoseconds, or quadrillionths of a second, to 280 femtoseconds. No matter how short or long it was, though, each pulse contained the same amount of energy in the form of X-ray light; so you might expect that they would have roughly the same effects on the nitrogen molecules.

But to the team's surprise, that was not the case, Hoener said. The long pulses stripped every single electron from the nitrogen molecules, starting with the ones closest to the nucleus; the short ones stripped off only some of them.

With all this activity going on inside the atom, scientists have a new way to explore atomic structure and dynamics. Further experiments have investigated nanoclusters of atoms, protein nanocrystals and even individual viruses, with results expected to be published in coming months.

SLAC National Accelerator Laboratory is a multi-program laboratory exploring frontier questions in photon science, astrophysics, particle physics and accelerator research. SLAC is located in Menlo Park, California, and is operated by Stanford University for the U.S. Department of Energy Office of Science.

Argonne National Laboratory seeks solutions to pressing national problems in science and technology. The nation's first national laboratory, Argonne conducts leading-edge basic and applied scientific research in virtually every scientific discipline. Argonne researchers work closely with researchers from hundreds of companies, universities, and federal, state and municipal agencies to help them solve their specific problems, advance America's scientific leadership and prepare the nation for a better future. With employees from more than 60 nations, Argonne is managed by UChicago Argonne, LLC, for the U.S. Department of Energy's Office of Science.