Inside Universe of Particles (image courtesy of CERN).

It’s like stepping into a science fiction film: Eerie blue and green lighting; spherical white chairs with black cushions; touch-operated computer information stations; a full-wall projection of stars and galaxies; and a calming voice coming over a loudspeaker and asking, “Why are we here?”

If the architectural firm behind the new exhibition, Atelier Bruckner, wanted to get their audience excited about science, they have certainly succeeded. The new CERN public exhibition Universe of Particles will make a fantastic starting point for lab visitors. In dramatic fashion, it presents them with the big, exciting questions that CERN scientists would like to answer, like “What is dark energy?” and “What will be the fate of our universe?”  These questions alone will inspire excitement in many people, but the design group has used a dramatic setting to ramp up visitors’ excitement. Like a good sci-fi flick, it ignites the feeling of excitement that comes with the start of a great adventure. 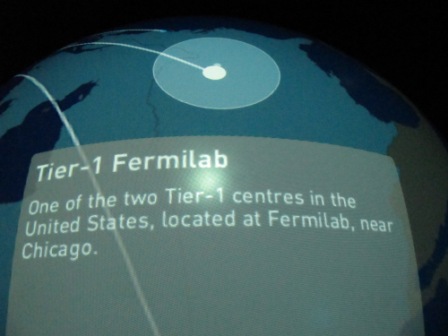 From the entrance of the room, visitors notice what appears to be a large globe, standing over four feet high. But an up-close view shows that the massive ball is blank, until a projection from above turns it into a globe of the Earth. As visitors spin the globe (technically referred to as the Interactive Ball), the light projection keeps up and reveals a complete map of our planet, but with the addition of circular markers that open up to reveal information about each country’s participation at CERN. Hit a button to change the rolling display to a timeline of CERN’s history. A few other display screens use the same projection-based, touch sensitive technology that makes you feel like you're playing with a giant iPhone.

To get away from the crowd for a moment, visitors can sink into chairs cut from white spheres, creating a small cave-like setting. Select a language, and a speaker begins to explain the search for the cause of the matter/antimatter asymmetry or the basis for string theory. Display cases, also cut out of futuristic white spheres, feature a few artifacts of physics like the first World Wide Web server and parts from old detectors. The Globe (image courtesy of CERN).

About every half hour, the lights dim even more, and a soothing voice from above begins to narrate a visual presentation about the great universal questions that CERN science seeks to answer. The projection plays on one segment of the curved wall, and on a large angled surface in the middle of the room. When the show ends, a projection on the slanted surfaces plays recreations of particle collisions.

The new exhibit rests inside the most recognizable building at CERN, The Globe (although it is technically not on the CERN campus, but directly across the street from the main entrance). The Globe of Science and Innovation is a 130-foot-wide, 88-foot-tall sphere made of five types of timber, making it a natural carbon sink. It was built for an exhibition in Hanover, Switzerland, as a symbol of sustainable building. Two walking ramps spiral up the outside of The Globe from the ground floor (where the exhibition is located), and another walking ramp connects the two floors from the inside.  The second floor is a high-ceilinged room with exposed wood walls. CERN uses the space for some press conferences and public events. The bottom half is now dedicated to the exhibit center, along with the hallway winding down on the inside, which features posters explaining the big bang. During the audio visual presentation inside Universe of Particles (image courtesy of CERN).

Rolex sponsored the entirety of the exhibition hall, and Jacques Baur, Associate Director and Head of Research for the company, spoke at a press event for the new exhibition last week. Baur emphasized just how impressed he was with the detectors he saw at CERN and the work going on there. He discussed how the exhibit falls under Rolex’s philosophy of philanthropy, particularly toward science.

Universe of Particles is open to the public starting July 1, 2010.