A Fermilab shipment of cavities to the Japanese laboratory KEK marks a major milestone in the advancement of US particle accelerator technology and the development of the proposed International Linear Collider.

Fermilab shipped two high-gradient nine-cell ILC-type cavities for use in the S1-global effort, a prototype at KEK of the ILC main linac. These cavities were "dressed", or sealed in a helium vessel and outfitted with the components needed to hook it up to a power source.

SRF cavities enable accelerators to increase particle beam energy levels while minimizing the use of electrical power by all but eliminating electrical resistance. Future experiments into the origins of the universe and nature of matter, including the proposed ILC and Project X, both of which Fermilab would like to host, will require advanced SRF technology.

“This proves we are ready to seal high performance cavities in helium vessels and show in tests that they meet ILC standards. That’s not an easy thing to do,” says Tug Arkan, Fermilab project engineer for the cryomodule assembly facilities group, about the US contribution. “Still, it’s not over yet. We still have to put it all together in Japan.” The layout for S1-global system test. Module C produced by INFN will contain two cavities from Fermilab and another two from DESY, and STF's Module A four KEK cavities. Courtesy of  KEK.

Arkan and two Fermilab technicians followed  the cavities to Japan on January 5 to begin the multi-week process of assembling the US-built cavities and two German-built cavities from DESY into an ILC-like cryomodule. INFN in Italy constructed a cryostat to work with the cavities. Next, four Japanese-built cavities will complete a second four-cavity cryomodule. Physicists will test the connections in March.

Demonstrating that cavities built oceans apart can interconnect while maintaining a high gradients, called "plug compatibility", is key to showing the feasibility of the ILC. This opens the door to faster production, encourages creativity, and provides a deep bench of alternate component designs to reference if unexpected problems arise. The proposed next-generation electron-positron collider’s complexity will tax global government and industry production capabilities. 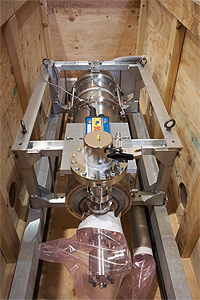 Dressed 9-cell cavity ACC011 has arrived at KEK from FNAL for use at the S1-global experiment. Courtesy of Nobu Toge.

Few other than the aerospace industry have experience or the tools to work with the exotic material niobium, which forms the cavity shell. Physicists require a mirror-like surface on the cavities far beyond the welding and polishing needs of other industries. The slightest imperceptible blemish or fragment of a dust speck will limit the cavity performance.  While governments have tapped industry to help build the cavities only a handful of companies have the will or skills to meet the demand. “Can they be built in different regions of the world--with the same cavity frequency but different components–-and be assembled together,” Arkan says. “If the ILC is to be built, it will require 17,600 cavities for 2200 cryomodules; there is no way they can be built in one region.”