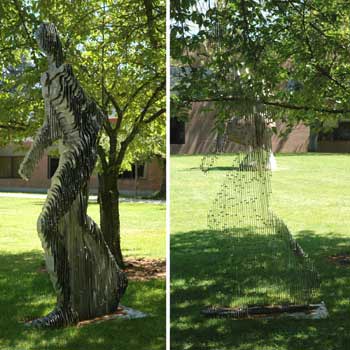 Louis de Broglie theorized in 1923 that anything with mass, from electrons and protons to Volkswagsons and people, also has a wavelength. If we created just the right circumstances and had eons of time, we could theoretically create a beam of people that behaved like a wave.

While that experiment isn't likely to take place anytime soon, Julian Voss-Andreae found another way to turn a man into a wave. His sculpture Quantum Man II consists of a series of steel sheets which form the image of a human when viewed from one angle, but nearly disappear when viewed from another. Like the diffraction pattern of a wave, the front of the plates is clearly visible, but the sculpture seems to disappear and reappear as you move past it. The sheets are equally separated by about 3/4 inch, a bit larger than the actual human de Broglie wavelength of about 10-38 m. The sculpture is stunning in both its aesthetic value and its ability to capture in stillness a concept that is often difficult to explain with words.

Voss-Andreae says he was always interested in art, particularly in painting. It was after that phase, in his late teens, that he says he became fascinated with "the weirdness of quantum physics," and wanted to "see how far I could get in trying to understand it." He got so far as pursuing physics graduate work at universities in Berlin, Edinburgh, and Vienna, enough time to give him a good grasp of complex quantum concepts. But he eventually found his way back to art, though this time with a totally different world view. He moved to Portland in 2000, graduated from art school four years later, and has since dedicated himself to creating works of art that are deeply influenced by science. While many artists do take a cue from science from time to time, Voss-Andreae's work thus far is exclusively science based.

Through the New York based Art and Science Collaborations, Inc. (ASCI), Voss-Andreae met Sarah Tanguy, the guest curator for the American Center for Physics. Tanguy wanted have Voss-Andreae do a show at ACP, but Voss-Andreae said he wanted to create all new pieces. On Monday, November 16, his collection titled Quantum Objects premiered at the ACP, and it is now open to the public. A small version of Quantum Man appeared beside 14 other physics-inspired works. You can see all of them, and an archive of Voss-Andreae's other work at his website.

"The term 'Quantum Object”' although regularly used in physics, is really an oxymoron," writes Voss-Andreae in his description of the collection. "An ‘object’ is something that lives completely in the paradigm of classical physics."

It's a subtlety that only a physicist could point out, and only an artist could take advantage of. Things that exist in the quantum world do not exist as classical objects--it is partly this distinction that makes them quantum. For example, an electron orbiting the nucleus of an atom does not take one distinct path, but all possible paths, until we measure it. But we still try to create representations of an electron circling around a nucleus--first as a little round ball taking a very clear cut path, and then later adapting that image to look more like a cloud surrounding the nucleus. There are many classical representations of the quantum world used by physicists like the path of an electron, or just the idea of point particles as little round balls. Even so, these images are inconsistent throughout physics literature because people are constantly trying to alter them slightly so that they will better capture the quantum essence.

Faced with the challenge of turning quantum objects into classical ones, Voss-Andreae is presented with two opportunities. One is to simply make standard classical representations of quantum objects more aesthetically pleasing. He certainly does this, and does it exceptionally well, but this is something that a dedicated text book could also tackle. The second opportunity he is presented with, one that requires a background in physics, is to infuse the classical representations of quantum objects with some philosophical interpretation. While the pieces of Spin Family use the particles-as-little-balls idea, he also takes the notion of a "family" of particle further, equating a particle's spin with gender. His piece "Night Path," interprets Richard Feynman's technique to measure all possible paths that a particle could take by "slicing up" segments of space-time and creating all possible paths. The result is a stunning work of art in which a divided up black box holds taut gold threat that collectively trace a curved path. Voss-Andreae says the path "connects the idea of the quantum mechanical path to the image of a meteor, a rock falling through the dark of the night, often believed to be connected to a meaningful event."

The additional challenge for Voss-Andreae is creating classical interpretations of quantum objects where there are few or none previously established. What object represents symmetry breaking? This phenomenon begins with a system suddenly being presented with multiple possible paths, or multiple energy minima. So Voss-Andreae uses hanging chains to represent a graph of those energy minimums. Some look the way we expect--a chain hanging down in a 'U' shape--while other possible paths look more and more as if they are defying gravity. When the system choses a path, symmetry is broken, and it may produce an equally counter-intuitive result.

Concepts like symmetry breaking and the de Broglie wavelength aren't part of non-science vernacular, but Voss-Andreae says he wants the general public to enjoy the works. He wrote in an email message, "What I want is to increase the audience’s capacity to intuit the deeper nature of reality by sensually experiencing the works." However, Voss-Andreae says when he began the project he had physicists in mind, and wanted to create something "that they could relate to." It is perhaps more common for artists tackling science to have the goal of making the science more digestible for the general public; not many art projects are offered up mainly for the enjoyment of physicists. Could such a project not only entertain them, but give them something new to think about?

Voss-Andreae says that one key benefit of making art about science is that it requires taking a step back to look at the larger picture. Voss-Andreae's own career change and subsequent change in perspective made him look differently on science's attempt to always break down the natural world into smaller pieces, and draw conclusions without looking at the larger picture. He uses nutrition as an example.

"We know quite a bit about single molecules such as vitamins and how their lack affects our health," he said. "Extrapolating from that though, we tend to believe that a diet consisting of burgers and fries is OK as long as we have our vitamin pills with it. But...nutrition is a concert of thousands of molecules together."

In relation to physics, he says his work has drawn him back to the philosophical implications of quantum mechanics, discussed by physicists like Bohr and Einstein, and many of which are still open ended.

"It is easy as a physicist to essentially...[believe] that we don’t really have a problem with quantum mechanics because it is such a fabulous tool to predict the outcome of all experiments we have designed," said Voss-Andreae. "It is wise to step back every now and then, re-connect the dots and keep the bigger picture in mind."

Voss-Andreae's work has leaned more and more toward biology in recent years, and he says he feels himself pulled in that direction. While the study of the human body is a whole new realm for him, he is fascinated in particular with the structure of proteins, which led him to create his largest piece called Angel of the West, depicting the molecular structure of the human antibody.

The collection "Quantum Objects," is open to the public at the American Center for Physics.