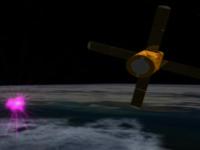 Artists rendition of a satellite and a terrestrial gamma-ray flash.

Violent and massive events in our universe create brilliant gamma-ray displays that will keep the Fermi Gamma-ray Space Telescope busy for a decade. But recently, Fermi has turned its eyes back to Earth, where it can see evidence of Terrestrial Gamma Flashes, or TGFs, which are believed to originate at the tops of thunderstorm clouds. Fermi announced that it has detected positrons from TGFs, a first result and a major clue about what actually causes them.

Scientists now believe that what they detect as TGFs could be two different phenomena: actual gamma rays, and accelerated particles. Current theory suggest that TGFs originate when electrons caught in lighting storm electric fields become accelerated and collide with air particles, producing gamma rays. The electrons may also eject more electrons from the air particles, causing an avalanche of particles in the electric field, resulting in the second kind of TGF. Fermi has detected a total of 17 TGFs, which are identified as such based on their correlation with lightning flashes.

At the Fermi Symposium, Michael Briggs, a research scientist at the University of Alabama in Huntsville, reported that Fermi has detected TGF gamma rays measuring 511 keV, the exact energy of gamma rays ejected as a result of positron decay. “Fermi’s results on positrons are a first,” wrote Briggs in an email after his talk. “They don't contradict existing theory, but require an extension.” Eventually, Fermi’s results could confirm the existence of two separate phenomena. Briggs is preparing the results for publication.