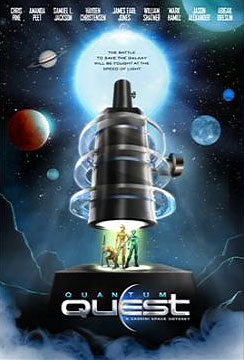 On Wednesday October 20, 2009, the Imagine Science Film Festival hosted the world premier of Quantum Quest: A Cassini Space Odyssey, an animated tale about a photon named Dave, who lives in the sun and is sent on a quest to save the telescope Cassini. Quantum Quest has all the ingredients for a good kids movie: funny and lovable characters throughout, a battle of good and evil, and a take-home message about believing in yourself. But more than anything, the film boasts quite possibly the most up-to-date and astounding animations of the solar system available. Astronomy lovers will weep.

Dave is a photon living in the core of the sun and mostly living a safe, normal life. He and the other photons look like humans, except that they’re glowing yellow and have odd body tattoos and tails down to their feet. And, of course, they talk. Living in the sun with the photons are neutrinos (also human-shaped but green, and with Tweety-bird-like heads) and protons (upright-walking lizards). Dave’s world is shaken up when he is given the task of carrying a vital message to Cassini in order to prevent its destruction by the armies of The Void and his right-hand man Captain Fear. His minions of dark matter threaten to gobble up anything living or light, and they hate knowledge--hence their desire to destroy Cassini.

While the film is cute, it’s no Pixar triumph, and packs the plot into very few words and very little time. Still, its characters got to me and I laughed at the jokes. Plus, it did a neat job of working some real science into a story of this kind (for example, the neutrino Reina can escape from the enemy because none of the fundamental forces affect her much). It did boast an unbelievable cast, which included two Captain Kirks (William Shatner and Chris Pine) and two Darth Vaders (James Earl Jones and Hayden Christensen).  It also included Jason Alexander, Sandra Oh, Abigail Breslin, Amanda Peet, Mark Hamill, Samuel L. Jackson, and others. Oh yeah, and Neil Armstrong.

But the film’s greatest achievement isn’t its story line or the acting--it’s the animations of the solar system that will captivate audiences both young and old. The film will have a major release in IMAX theaters in February 2010, where it will be shown in 3D (the admittedly unfinished draft we saw was only in 2D). Quantum Quest will probably appear mostly in science museums, and it represents a leap forward in movies of this kind. The imagery of the inner planets, the rings of Saturn, and the Kuiper belt near the edge of the solar system are stunning, and extremely accurate. Based on information from a variety of NASA missions, the film actually identifies on screen which mission provided information about which solar system body. Where was this movie when I was 12? I can easily see this production giving a big boost to kids’ curiosities about space.

At a panel discussion after the film, the writer and co-director Harry Kloor discussed how he got into science through science fiction. Kloor holds PhDs in both physics and chemistry, but has also written for Star Trek: Voyager. Someone asked how he decided when to use very accurate science in the film, and when to use science fiction; the audience member gave the example that Dave the photon and Reina the neutrino could hear each other talk in space. Kloor reminded the viewer that it was a leap to have the photon and neutrino talk at all, and in cases where the story was clearly fictionalized they didn’t worry about scientific details. But, he says, whenever science is presented as science, it’s totally accurate. Kloor said kids seem to know where the science and the science fiction split--it’s adults who can’t seem to separate them.  And perhaps Kloor is onto something in terms of combining science and fiction, by making it very clear when the film is discussing science and when it isn’t.

While I couldn’t quite figure out why (and was too happy to care) Kloor brought with him to the panel discussion four-time space shuttle astronaut Dan Barry. Barry has logged over 700 hours in space, with 25 hours in space walks working on the international space station. Over six feet tall and thin as a rail, Barry was a giant on the stage next to Kloor as they discussed science and entertainment. Barry discussed how he got into science through his desire to fly (“I was the kind of kid who jumped off everything…”), which eventually led him to a career as an engineer. In the Q&A, an audience member asked Berry about his experience in space, at which point he recounted, with awe and grace, the first time he looking down at the Earth on a space walk. He had made sure NASA bought him a new visor so he could see the whole thing clearly. His description of the colors, shapes, and gradients of the earth, compared to the pure blackness of space, had the whole audience silent. “You just can’t capture it with a camera,” he said. “You really have to go see it yourself.”

Quantum Quest is planned for wide release in February 2010.