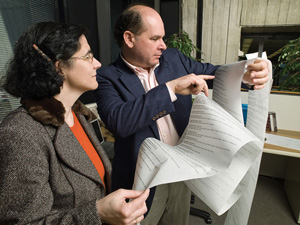 Author lists for experiments at the LHC can include thousands of names.

The CMS collaboration at CERN's Large Hadron Collider has posted its first detector performance results to arXiv.org, and the paper’s author list could run as final credits for a feature film.

“It just reflects the fact that experiments at the LHC are complicated,” said Joel Butler, US CMS program manager. “The number of people involved in an effort like this is huge.”

The CMS detector is one of the two main detectors at the Large Hadron Collider at CERN.

The paper’s author list credits not only the physicists involved in the study but also the engineers and technicians who made the study possible by designing and building the detector.

Building and using the large, complex machines scientists need to conduct high-energy physics experiments requires the cooperation of thousands of collaborators. The challenge of choosing whom to give credit once the experiment yields results has been a source of discussion.

“Inside the field, this inclusive approach works very well,” Butler said. “If we need to know who did the specific work reported in the paper, we can ask. The problem is when people in the field of high-energy physics have to be compared to people outside the field.”

It could be difficult for a high-energy physicist sharing credit with thousands of other scientists to compete for a position at a university against a solid-state physicist on a small experiment sharing the credit with fewer than five collaborators.

“The thesis award is very competitive,” Butler said. “People whose theses are even close to the top are very impressive. The winning thesis is always awesome.”

Hundreds of graduate students and post docs contribute to the CMS experiment. “Highlighting their accomplishments is important for their future and the future of our field,” Butler said.

This first paper is only the beginning of the huge number of publications to come from the CMS experiment. Collaboration members have another 22 papers in the pipeline based on cosmic ray data from 2008 alone, Butler said. They discuss alignment, calibration, background noise, and other detector issues scientists can address based on their experiences studying cosmic rays.

The collaboration recently completed its 2009 cosmic ray run and awaits the first particle collisions from the LHC. More publications trailing lengthy author lists behind them are sure to follow.