Universe can give birth to twin stars, simulations say 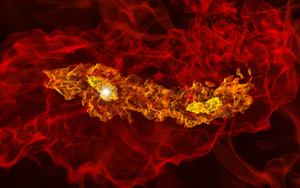 A simulation shows two high-density regions, in yellow, about 200 million years after the big bang. They are expected to evolve into a binary star system. Image courtesy of Ralf Kaehler, Matthew Turk, and Tom Abel.

The earliest stars in the universe formed not only as individuals-as previous research suggested-but sometimes also as twins, according to computer simulations by astrophysicists at the Kavli Institute for Particle Astrophysics and Cosmology, at SLAC National Accelerator Laboratory and Stanford University, and at Michigan State University.

This work, published today in Science Express, will help researchers fine-tune models for how structure in the universe formed and evolved. It also opens a whole new realm of research opportunities, since if one or both members of such a pair evolved into a black hole, it could release gravitational waves or gamma-ray bursts-phenomena of great interest to the astrophysics community.

Download an animation of the star formation simulation (.mov format) or watch it below.