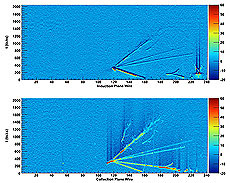 A screen capture of ArgoNeuT's first neutrino interaction event, as seen by induction and collection wire planes in the detector.

The Argon Neutrino Teststand, or ArgoNeuT, has seen its first neutrino--the first one observed by a liquid argon detector in the United States.

ArgoNeuT is named for the Argonauts, a brave band of mythical explorers led by Jason in search of the Golden Fleece; this makes for many fine nautical metaphors and puns.  This liquid-argon technology may offer a cheaper, more efficient way to capture neutrinos, mysterious particles that may hold the key to why the universe is made of matter, and therefore to why we exist; for details, see this feature in the August 2008 issue of the magazine.

Subsequent updates reported ArgoNeuT's first observations of cosmic rays--an important step in testing and calibrating the detector--and the lowering of the detector into a Fermilab tunnel 350 feet below ground, where it's shielded from those same troublesome rays.

“Liquid-argon detectors can achieve high accuracy in determining the type of particle interaction. Because of this, they are very good at rejecting background events. These detectors can also get the same measurements as much larger detectors that use different technologies,” said Brian Page, a graduate student at Michigan State University who works on ArgoNeuT.

ArgoNeuT, a small, 175-liter, liquid-argon-filled detector, sits upstream of the MINOS detector in the neutrino beamline. Neutrinos from the NuMI beamline enter the ArgoNeuT detector chamber and interact with argon atoms. The interactions produce light and charged particles, which continue to travel through the argon and knock electrons loose. A wire plane attracts these electrons, which induce electrical signals. The data collected helps scientists reconstruct a 3-D image of the original interaction event.

Scientists lowered the experiment, commissioned in 2008, into a detector hall in January 2009. It was filled with liquid argon this May, and saw the first interactions on May 27.

“Seeing the neutrino interactions is another step towards showing us that we can build these detectors for the long baseline neutrino oscillation program at the proposed Deep Underground Science and Engineering Laboratory,” said Bonnie Fleming, ArgoNeuT spokesperson.

All we can say is: Smooth sailing!