Between the folds: the science and art of origami

"You and I were born from folding," says origami artist Paul Jackson. 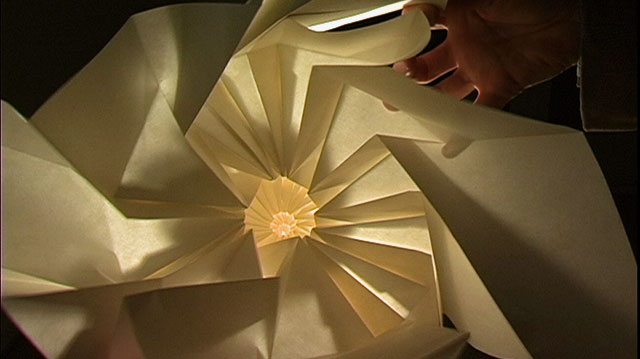 Jackson isn't a scientist, but he is aware of the many places that folds appear in nature, from DNA and vital proteins, to geometric folding that changes the space we live in. Jackson is one of a handful of premier origami artists featured in a new documentary called Between the Folds, in which director Vanessa Gould examines the art of origami as well as its relationship to math and science.

The craft of origami originated in Japan and dates back thousands of years, but it included little more than paper cranes until the 20th century. A man named Akira Yoshizawa transformed origami into an art limited only by imagination, creating paper statues that look, as the film says, "as if they're about to breathe." Nearly all the artists in the film cite Yoshizawa as an influence, and now produce similarly awe-inspiring work. French artist Eric Joisel creates masks and human faces that emerge from the paper full of emotion and sometimes seem to stare right back at observers. Physicist and origami artist Robert J. Lang creates origami for commercials, using stop-motion filming to give his figures movement. Lang, who is also Editor in Chief of the IEEE Journal of Quantum Electronics, is well known in the field for folding some of the most realistic and complex origami shapes ever created. (A gallery of his origami was featured in symmetry.)

Around the world, origami is growing in popularity as well as complexity.  Students at an international origami conference display works of astounding detail that take hundreds of hours to fold. Some of their pieces begin as sheets of paper six feet by six feet, and become statues only ten inches high. Theoretically, any origami creation can be recreated based on a set of instructions. Those instructions come as a pattern of lines and indicators on a flat piece of paper, which tell the folder how and where to fold the paper. Students of origami now commonly use origami design software to create such patterns, either recreating a completed piece or making instructions for new pieces they have in mind.

Erik Demaine, a professor at MIT who studies the mathematics of origami and is also featured in the film, uses design programs to push the theoretical limits of folding possibilities. He has designed a computer program that he believes will create an origami pattern for any three-dimensional object the user chooses. Some of these objects, he believes, would pose a significant challenge for human folders. Demaine is working to prove that its abilities are truly limitless.

Computer generated patterns also have real world applications. Understanding the most efficient way to fold a given medium has been used in sheet metal bending, car airbag folding, robotics, and hydraulic tube folding. Lang would like to see them used in space shuttle missions, where efficient packing is essential.

But complexity is not the only goal for origami artists, nor should it be for scientific applications. Beauty can arise from simplicity and so can understanding. Origami artist Paul Jackson is exploring the possibilities that arise from folding a piece of paper just once. His results might seem like extreme artistic minimalism, but they also touch on the very nature of folding. A fold, like a wave, exists only as a manipulation of a medium. Each fold in a piece of paper changes the memory of the paper--it changes the paper's shape and the position that the paper most wants to be in. More technically, a fold changes the paper's least energy state. In this way, a single fold can change the behavior of the entire sheet of paper. Taking advantage of this change, Demaine and his father, artist Martin Demaine, folded strips of paper connected at each end to create delicate statues (photo right). Nothing is pinned or glued; the paper rests in these gorgeous shapes thanks to the carefully placed folds. The works, titled "Computational Origami," are on permanent display at the New York City Museum of Modern Art.

Chris K. Palmer takes this idea a step further and uses folding to create movement from paper. By folding the paper in one direction, and then in another, the paper will push to return to its lowest energy state. With meticulous, repeating folds and incredible patience, Palmer constructs what looks like a tiered cake of spiraling paper. Pressing down on the paper, it pops back up. With a little initial energy, the paper unfolds itself and reveals beautiful repeating patterns (top most photo). After years studying geometric patterns, Palmer seems to have an intuition of how the folds will behave; an understanding of the language of folds. 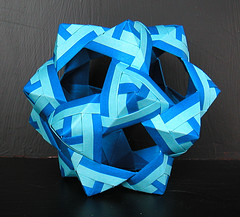 Besides the hard core origami artists who spend hours making fold after fold, the film also highlights teachers who are using origami to teach math and geometry to children of all ages. As far away as Israel, programs are in place to utilize the fun of paper folding with mathematical concepts that normally have no physical anchor for children to hold onto.  Professor of mathematics at Western New England College Tom Hull speaks enthusiastically about more advanced mathematics concepts that he explores through origami (using a technique that often combines more than one piece of paper). An iso-area hexagonal collapse, twisted into a 3D shape and held there via wet folding. (Tom Hull)

At the CUNY Graduate Center in New York last month, Gould, along with Erik and Martin Demaine addressed a packed theater after a screening of the film. Demaine discussed his own work at MIT, and generally discussing some of the major real world applications of the mathematics of origami. The most promising application could be understanding protein folding. "Why do proteins fold?" he asks, "What happens when they fold?" Understanding these questions could also help scientists find proteins that have folded incorrectly. Such deformations can lead to certain diseases.

Robotics could also benefit from this work, since origami reveals how interconnecting pieces can be folded to give them the greatest range of movement, most efficiently. This comes from the heart of the mathematical nature of origami, where researchers ask questions about possible manipulation of shapes in space. Given different folds, those questions can be answered differently.

Gould says Between the Folds is the only documentary ever made on the subject of origami. The fact that she spends a large amount of time making the connection between origami, mathematics, science, and the teaching of the former two subjects, suggests that this is becoming a predominant part of origami. The film's production company, Green Fuse Films, is dedicated to topics like this one, with the belief that "creative frontiers in art and science should be documented." We can't wait for their next project.

The next showing of Between the Folds will take place at the Brooklyn International Film Festival, June 13 and 14.