A story of the people who shaped Fermilab Fermi National Accelerator Laboratory in Batavia, Illinois, probes the largest questions in the universe by looking at the world's smallest particles. But all that ground-breaking science doesn't occur in a cultural vacuum. Discoveries have evolved amidst a back story of people, politics, and even art.

With the release of a new book Fermilab: Physics, the Frontier and Megascience, three women who have spent years at the flagship laboratory for American high-energy particle physics, provide a historical view of how big science happens. They also reveal some of the little known facts surrounding the "laboratory on the prairie," including what the tall sculpture in the middle of the pond in front of Wilson Hall represents and why Fermilab's mailing address is Batavia instead of Warrenville.

The book is a must-read for science and Illinois history buffs as well as anyone who has ever worked at or visited Fermilab. This first widely published history of Fermilab gains its strength from the close ties its authors have with the laboratory. 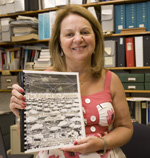 Adrienne Kolb has been an archivist at Fermilab for 25 years; Lillian Hoddeson is Fermilab's historian and a history of science professor at the University of Illinois-Urbana Champaign; and Catherine Westfall wrote her PhD dissertation on Fermilab and is currently a visiting history professor at Michigan State University.

Their comprehensive history of Fermilab is largely told through portraits of the two leaders who have most shaped the institution: Robert Rathbun Wilson, the first director; and his successor, Leon Lederman. The authors write: "While Wilson's image was based on his personae as pioneer, engineer and Renaissance man; Lederman's rested on his all-embracing passion for physics." 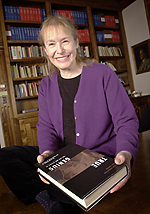 The authors' human-interest angle, which focuses on the people who shaped Fermilab through 1998, will interest general readers and specialists alike. The book is rich with historical and scientific details, and it includes many citations from interviews and collected oral histories, which make for a very lively account.

The authors frame the book around the three themes mentioned in the sub-title: Physics, the Frontier and Megascience. The US government, through the Department of Energy's predecessor, the Atomic Energy Commission, appointed Wilson to lead the National Accelerator Laboratory in 1967. At this time, the goal for particle physics was to move significantly beyond the 30 GeV energy threshold being examined by Brookhaven National Laboratory and CERN, the European particle physics laboratory located in Switzerland. Wilson wanted to take his field even further with an accelerator designed to reach 500 GeV. To highlight that, Fermilab lore has it, Wilson asked post offices in towns surrounding Fermilab to give him a Post Office Box number 500 for the laboratory. Batavia was the only town with such a high number, so the laboratory chose a Batavia mailing address.

The second part of the book, "A New Frontier on the Illinois Prairie," discusses how Wilson crafted Fermilab with an eye to his own upbringing on  the plains of Wyoming. Fermilab was established on farmland that would become one of the largest restored native prairies in the United States. In addition to Wilson's efforts to plant hundreds of trees and shrubs, he also brought buffalo to Fermilab to highlight the connection between the area's frontier past and laboratory's goal to be on the frontier of science.

Under Wilson's tenure, Fermilab turned on its 200 GeV proton accelerator, the Main Ring, in 1972. Wilson also contributed to the aesthetics of Fermilab. One of his contributions to the sculptures dotting the site is the steel obelisk in the pond in front of Wilson Hall. He called it "Acqua alle Funi," which in Italian means "water to the ropes." That phrase was a rallying cry in 16th century Rome when workers raised an obelisk to its vertical height at St. Peter's Square, using ropes that needed water to work properly. At Fermilab, it became the rallying cry during the final months of construction of the main accelerator ring, which is surrounded by water used to cool magnets heated up by particles pushed to ever faster speeds.

In 1978, Wilson left the directorship to Leon Lederman, a physics professor at Columbia University. The third part of the book, "The Road to Megascience," discusses the accomplishments during Lederman's tenure. According to the authors, the "unabashedly romantic" leader often said: "The life of a physicist is filled with anxiety, pain, hardship, tension, attacks of hopelessness, depression and discouragement. But that the epiphanies made it all worthwhile."

Under Lederman's leadership, Fermilab blossomed with a number of projects: superconducting magnets, the 1000 GeV Tevatron, and two large detector groups, CDF and DZero. He also ushered Fermilab into greater international collaboration and renown. "Lederman's efforts made Fermilab an apt home for a megascience that would establish Fermilab at the frontiers of science for decades to come," the authors write.

Lederman also made Fermilab feel more like a home to scientists from all over the world. He created the Chez Leon restaurant and the children's center. He also started a program for high school students called Saturday Morning Physics. The book does not skirt over the many tensions, mistakes, and disappointments Fermilab has known, nor the scientific details of the institution's main endeavors. Physicists and other scientists would especially enjoy reading about the various ups and downs in experiments that predated their own.

For everyone else, the book is an engaging read and a real insight into one of the world's most renowned physics institutions.

View a gallery of photos from the early days of Fermilab and read reviews of the book at the authors' Web site.

The book is available for sale at the Lederman Education Center at Fermilab, as well as through area book stores and online at Amazon.com.