Project X, a Fermilab-hosted international accelerator facility, could break ground as soon as 2013. 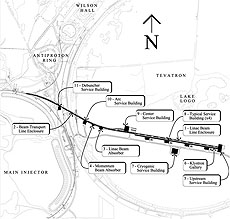 A potential location for Project X at Fermilab.

Accelerator experts from around the world gathered at Fermilab last month to work toward establishing a formal collaboration and further plans for Fermilab’s proposed proton accelerator.

At the meeting held Nov. 21-22, more than 133 attendees established a multi-institutional collaboration for the R&D phase of the project.

"Project X allows us to use the facility we have here and puts us at the leading-edge of world particle physics," said Fermilab Director Pier Oddone.

Steve Holmes, Fermilab’s associate director for accelerators, believes that the collaboration can finish plans encompassing the project’s scope, cost estimate, schedule and R&D work by mid-2009. This could lead to Critical Decision-0, the first in a series of Department of Energy goals that dictate the progression of a project, later in the year. Holmes, who is spearheading the project, would like the collaboration to aim for CD-2 approval in 2012 and construction starting in 2013.

"We see Fermilab as the sole remaining US laboratory providing facilities in support of accelerator-based elementary particle physics. Project X would provide a forefront accelerator that could provide the community with world-leading capabilities for decades," Holmes said.

Collaborators from across the globe will work on the project, but Project X will be a US project hosted at Fermilab.

“We benefit from the expertise of collaborators from Europe and Japan,” said Paul Derwent, head of the Recycler department in Fermilab’s Accelerator Division. “We have a lot of things in common in regard to the future of accelerator technlogy, including technical problems to solve. We can benefit from each other.”

The proposed proton facility would marry a superconducting 8 GeV linac with existing elements of Fermilab’s accelerator complex. Charged hydrogen ions accelerated through the 8 GeV linac would enter the Recycler, where electrons would be stripped off and protons stored. Protons from the Recycler would then enter the Main Injector. In the Main Injector, protons would be accelerated for use in very long baseline neutrino oscillation experiments, such a NOvA and DUSEL. In addition 8 GeV protons from the Recycler could support kaon and muon based precision experiments, which could run simultaneously.

“This experiment opens up a variety of avenues,” said Fermilab accelerator scientist Sergei Nagaitsev. “Physics holds great surprise, and this gives us flexibility.”

Project X’s design would allow for expansion if Fermilab eventually wished to pursue a muon-based facility, either a neutrino factory or a muon collider.

“The energy and intensity frontiers have a strong reliance on accelerators," Holmes said. "We have configured Project X to contribute to both of these frontiers.”

Project X will contain superconducting radio frequency components similar in design to those needed by the International Linear Collider. The similarities will provide opportunities for joint development. Fermilab staff, with national and international collaborators, are currently learning to construct the accelerating structures that could be adapted to either Project X or the ILC.

“We are coordinating the Project X and ILC programs to provide maximum benefit to each,” Holmes said.

Derwent, Nagaitsev, and Fermilab engineer Jim Kerby are leading the team that is creating the initial configuration document, which includes the R&D plan and cost range for the project. They plan to have final document ready for a CD-0 review in early 2009.