A group of scientists known as the ArgoNeuTs—a word play on the Argonauts, the heroes of Greek mythology—have overcome the first hurdle in their scientific quest to observe neutrinos. In an e-mail to his colleagues, ArgoNeuT collaborator Flavio Cavanna wrote on Saturday, August 9:

“Dear ArgoNeuTs: After sailing across deep sea for about a week, with just few fire-breathing oxens and sleepless dragons found here and there, the first harbor of the long trip of the ArgoNeuTs to retrieve the Golden Neutrino Event now has been reached--a first cosmic ray event in liquid argon has been just recorded!!” 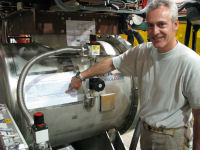 Flavio Cavanna points at an image of the first tracks, taped to the ArgoNeuT detector.

Less than a week before he wrote his e-mail, Cavanna and his collaborators filled their particle detector with liquid argon to catch cosmic rays. The text of his email refers to an article in the August issue of symmetry, which says:

“According to Greek mythology, the Argonauts were adventurers who sailed across the Mediterranean Sea in their ship, the Argo, to retrieve the Golden Fleece. Led by Jason, the crew braved fire-breathing oxen and sleepless dragons.”

ArgoNeuT stands for the Argon Neutrino Test project at Fermi National Accelerator Laboratory in Batavia, Illinois. The ArgoNeuT collaboration comprises about 20 scientists from six institutions. Their particle detector relies on liquid argon--cooled to a temperature of minus 187 degrees Celsius--to catch neutrinos. (To learn how the detector works, check out the graphic at the end of the symmetry article.)

To test its detector, the ArgoNeuT collaboration began filling it with liquid argon for the first time on Monday, August 4. Less than a week later, the ArgoNeuTs observed their first cosmic ray particles—a first step toward detecting neutrinos.

“It's a big step for the technology of liquid argon detectors in the US,” says Mitch Soderberg, Yale University, who worked on setting up the ArgoNeuT detector at Fermilab. “We're gaining the experience and knowledge necessary to build bigger detectors that can help answer some of the open questions about neutrinos.”

Cavanna was one of the three people working on the ArgoNeuT detector when it revealed the first cosmic-ray interactions.

“People were thinking this technology is black magic. But it’s more like learning to drive a new car. You need to adjust the seat, point the mirrors in the right direction,” says Cavanna, who works for the University of L’Aquila in Italy and came to Fermilab at the end of July to share his experience in starting up liquid-argon detectors. “The liquid-argon technology is more than reliable.”

The first cosmic ray event seen in the ArgoNeuT detector.

The next goal of the ArgoNeuT collaboration is the observation of its first neutrino, which Cavanna in his e-mail jokingly called “the Golden Neutrino Event.” Unlike cosmic rays, neutrinos rarely interact with matter. Despite the fact that every three seconds a trillion neutrinos go through an area the size of a hand, the chance that one of these neutrinos would leave a signal in the ArgoNeuT detector is basically zero. Instead, the ArgoNeuTs will place their detector later this year into an artificial, intense beam of neutrinos produced by accelerators at Fermilab.

The mysteries of neutrinos

Neutrinos may hold the answer to one of the most puzzling questions about the evolution of the universe: What happened to the antimatter? For every fundamental particle scientists have found an antiparticle, and the big bang almost certainly produced particles and antiparticles in equal numbers. Yet astronomical observations indicate that we live in a universe made of matter, with no sign of antimatter galaxies. How did the antimatter disappear?

The imbalance between matter and antimatter must have developed after the big bang. While experiments have revealed subtle differences in the quantum behavior of quarks and antiquarks, which are the building blocks of protons and antiprotons, their asymmetric behavior does not account for the excess of matter seen in our universe.

Physicists are looking toward another possibility. Did neutrinos cause the imbalance? Do neutrinos and antineutrinos display signs of asymmetric behavior?

Neutrinos behave differently than any other type of particle that physicists know. Experiments in the last 15 years have revealed that neutrinos have mass, a fact that the highly successful Standard Model of particles and their interactions cannot explain.

Intriguingly, the three types of neutrinos observed so far—electron neutrino, muon neutrino, and tau neutrino—weigh much less than quarks and protons. Theorists think that a see-saw mechanism connects these light neutrinos with a set of short-lived, ultra-heavy neutrinos that were abundant during the early universe. Those prehistoric neutrinos could have caused the matter-antimatter imbalance.

To find the answer, physicists must examine the quantum behavior of neutrinos, displayed when neutrinos travel long distances through matter and when they collide with atoms. In particular, the three types of neutrinos can transform into each other, a process known as neutrino oscillations.

Unveiling the details of these oscillations will be a major step in understanding the role that neutrinos played in the early universe. The challenge is to record the right type of neutrino collisions at the right energy, in sufficient numbers, and with the correct identification of particles emerging from those collisions.

Liquid-argon neutrino detectors might be the way to go. The ArgoNeuts aim to find out.