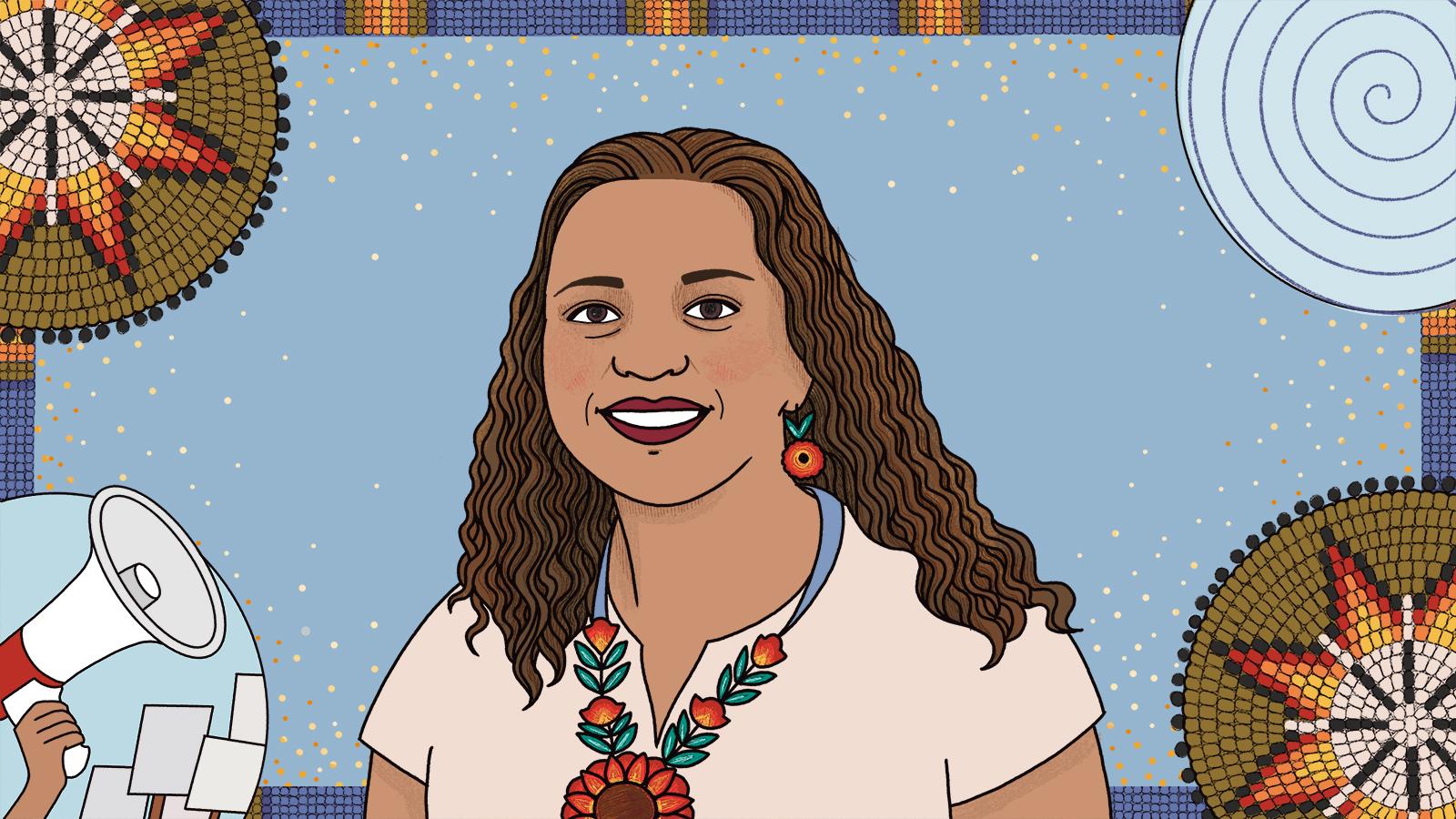 It took Ximena Cid three tries to pass her introductory physics class as an undergraduate student at the University of California, Berkeley. Most people would have given up after the first attempt, and certainly after the second. But “I’m really stubborn,” Cid says.

She was especially stubborn about passing a class in which she was both the only woman and, as an Indigenous Chicana, the only person of color. “When people tell me I don't belong in places, or I'm not good enough, it really gets me fired up and motivated just to prove them wrong,” Cid says.

Now, as an associate professor and chair of the physics department at California State University, Dominguez Hills, she can safely say she made her point.

Cid’s willingness to keep pushing toward her goals was instilled in her from a young age. As a child, Cid joined her parents in marching alongside labor leaders and activists Cesar Chavez and Dolores Huerta in the fight for Chicano and Native American civil rights in northern California and the West Coast.

This determination, coupled with an insatiable curiosity for physics and how people learn physics, led Cid to a career in the field of Physics Education Research and has helped her become an effective advocate for diversity, equity and inclusion in STEM, grounded in data-based research.

Cid’s parents were talented artists who taught her how to mix paints and create papier-mâché. “I grew up with all of the science knowledge in the art world but without actually describing it as science,” she says.

Her parents also taught her about her cultural heritage, including the impact the Mayan, Azteca and Inca civilizations had on mathematics and astronomy.

Some of Cid’s fondest childhood memories are of riding in the car as her mother drove her and her three siblings to San Diego every August to visit family. They made the 8-hour drive from Sacramento at night, Cid’s mother hoping her four young kids would sleep for a peaceful ride. But Cid would stay up, gazing out the window at the show of sparkling shooting stars that come with the annual Perseid meteor shower. “I thought my mom was so special, she gets shooting stars for her birthday,’” Cid says.

In high school, Cid played the viola in orchestra class. Outside of school, she played the violin professionally with Mariachi Femenil las Augilas, the first all-female mariachi band in northern California. So when she started college at UC Berkeley, Cid thought she might major in music. Instead, she found herself drawn to other subjects—primarily math and science.

For one of her electives, Cid took a course on human physiology in space—the study of how an astronaut’s body changes when they leave Earth. The class visited the Johnson Space Center in Houston, Texas, to meet with astronauts. “It was mind-blowing,” Cid says. “I think that was probably the most transformative class for me,” she says.

One of the graduate students who was teaching the class asked Cid if she would be interested in working as a research assistant. Cid was unsure what a research assistant did, but having worked multiple, miscellaneous jobs throughout her undergraduate career, she was eager to accept a position that wouldn’t require her to leave campus.

She found her time working on research—studying charged particles from the sun—gave her the opportunity to understand the real-world applications of the courses she was taking. “I thought that was amazing—to know how the sun could have an event and a couple of days later we experience the impact of that event on Earth in real time,” she says. “It made me fall in love with space physics.”

Finding a network of support

Cid’s research advisor, Janet Luhmann, research faculty at the Space Science Laboratory located in the hills behind UC Berkeley, connected Cid with Ramon Lopez, a space physicist who was then a professor at the Florida Institute of Technology. The two met in person at a meeting of the Society for Advancement of Chicanos/Hispanics and Native Americans in Science, or SACNAS.

After Cid’s experience with her astrophysics major as an undergrad, she was excited about Lopez’s dual research programs in both space physics and physics education. And Lopez says he could immediately tell that Cid “had a quick mind and that she'd be good at research.”

Once she graduated from UC Berkeley, Cid spent the summer working in Lopez’s lab as a research assistant. At the end of the summer, Lopez asked Cid to apply for a position as a graduate student. Cid says that for her mental health, she had to take a rain check on that offer. “I knew I wasn’t done yet with school,” she says.

But she was feeling burned out and needed a break. In the months following, she found herself in multiple jobs, including working with patent lawyers at a bioengineering company. She says she found the work interesting, but ultimately unfulfilling. A year later, she took Lopez’s recommendation, and he accepted her to his lab.

Cid spent the first year of her doctorate program as a student at Florida Tech. After the completion of her first year, she and her fellow labmates followed Lopez to a new position at the University of Texas at Arlington.

The physics department there wasn’t initially accepting of Cid’s research in physics education, she says. “So I had to spend a year or two teaching the faculty by doing studies and showing them how different approaches to teaching impacts students’ learning.”

They finally came around and, Lopez recalls, “on more than one occasion, as Ximena was getting close to graduating, my colleagues told me that she was one of the best students in the department.”

At the same SACNAS meeting where she met Lopez, Cid attended a talk by Keivan Stassun, a professor of physics and astronomy at Vanderbilt University and a first-generation American whose parents emigrated from Mexico and Iran. Stassun’s talk “was the first time I heard anybody speak about their culture and how it influences who they are and how they do science,” she says. “I became so emotional, and overwhelmed.”

Stassun’s talk inspired Cid to connect with fellow Indigenous scientists. Anytime she encountered an Indigenous scientist, she made a point to write down their name and contact information. After several years, “I had a handwritten note of 10 to 15 of us,” she says.

But it wasn’t until 2013, when she met fellow physicist Sophia Cisneros, that Cid was inspired to put that list to use. “I just remember feeling so overwhelmed, thinking, ‘Oh my god, I met another Latina Indigenous physicist,’” Cid says. “‘I'm not the only one!’”

At the following SACNAS meeting, Cid contacted a few of the people on her list, including Cisneros, to help her organize a first-of-its-kind session specifically for Indigenous physicists. Cid and three of her colleagues spoke, and another colleague—Lead Operator at the Laser Interferometer Gravitational Wave Observatory Corey Gray—danced in vibrant traditional regalia. The session was well-attended, and Cid has continued to organize it every year. “Having the ability to see ourselves has been really powerful,” she says. “Each one of us has been so active in our spaces within our small subfields, but now we have the ability to work with each other and help each other as Indigenous peoples.”

In her position at CSU Dominguez Hills, Cid continues to be a voice for traditionally marginalized people in STEM fields, including many of the students she mentors. “A lot of the advice that I give them is to really just know themselves and be confident in who they are,” she says. “Because as long as we know who we are, it’s a lot harder to feel out of place.”